‘But it’s been legal all f***ing year!’ the mechanic remonstrates with the UCI bike check commissar; maybe he could have phrased that better, but he’s under pressure – it’s the World Time Trial Championships after all.

‘No, I will show you the rule book; it is too long, you must shorten it!’ The mechanic pleads; ‘I physically cannot alter it, there’s no adjustment.’ The man who is about to ride the Cervelo that’s causing all the fuss, paces back and forth, this is just what he doesn’t need just minutes before he attempts to win another medal in the World Elite time trial championships. 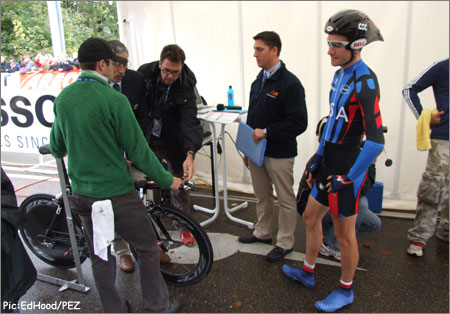 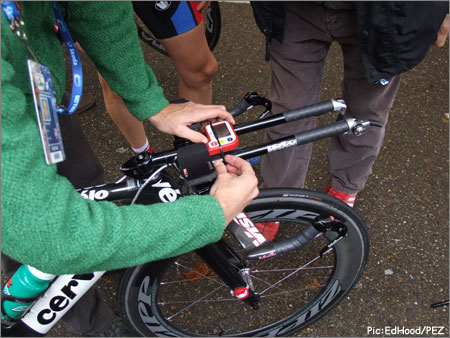 The officials go into a huddle and eventually David Zabriskie of the USA and CSC can put his bike on the turbo and spin-out the minutes until his race against time. That morning, I had been talking to Belgian team mechanic, Bjorn Leukemans, he had gone up early in the day, just to make sure that Dominique Cornu’s bike was cool with the check – he’s a pro mechanic and leaves nothing to chance. 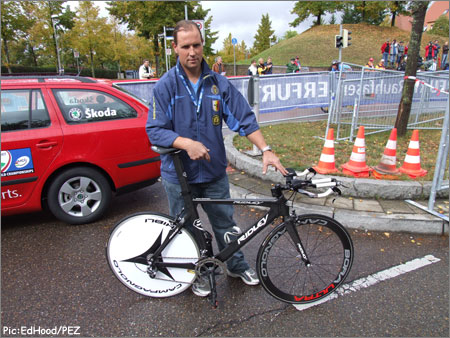 My job today is to set the scene, chart those minutes leading up to the last ‘wave’ of the 15 best time testers in the world setting off for the biggest prize there is.

But first, we need to check-out the parcours; yesterday, we took a trip round the under-23 circuit with the Latvians. 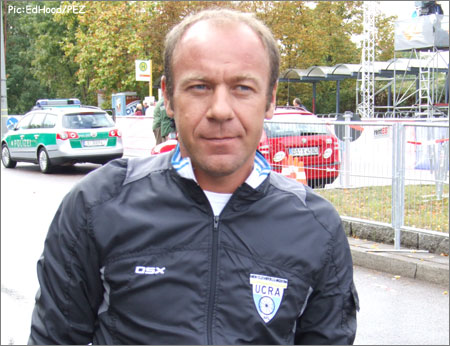 The stocky guy points to the rear door handle of the Skoda; I guess that means; ‘jump-in, Ed my boy.’But when you’ve been Olympic points race champion in 1992 and had 42 professional road wins (or was it 44?), then you don’t have time for pleasantries when you are going to the line to follow your rider. I was Giovanni Lombardi’s ‘runner’ once at the Copenhagen six, now all those jelly beans I fed-him are standing me in good stead. He’s in charge of the Argentinean team now and we’ll be following Pan Am Games time trial medallist, Matias Medici. 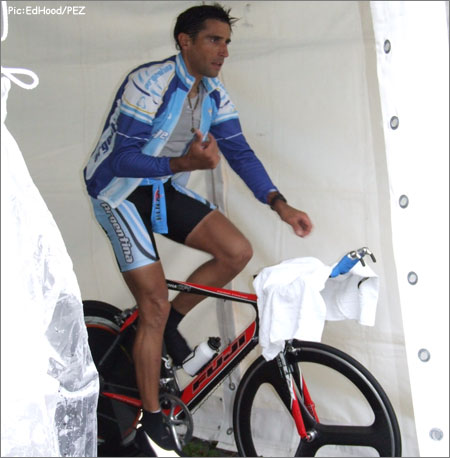 As we roll the Skoda to the line, a shout of ‘vecchio’ (old one) goes out from the car; a tall, slim man ambles across and leans-in the window. A big smile spreads-across his face as he chats to his former CSC rider, Giovanni Lombardi. Jeez! It’s Bjarne Riis – he does do smiles and small talk, after all! 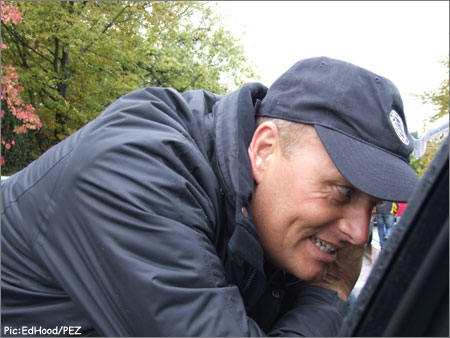 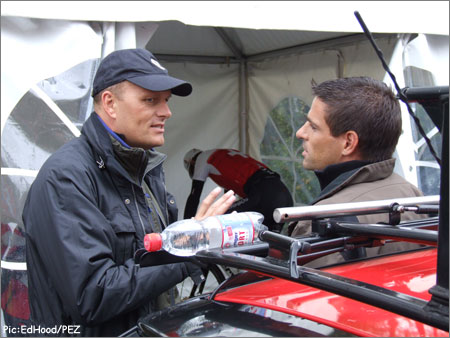 Despite the rain, there are twice as many photographers at the start. The first part of the course is exactly as the same as yesterday, a ‘big dipper,’ the rain may not have daunted the photographers, but the fans don’t like it and there are precious few folks beside the road. The big, tanned Argentinean doesn’t notice, he has a job to do as we head out through the trees to where the dog-leg starts. 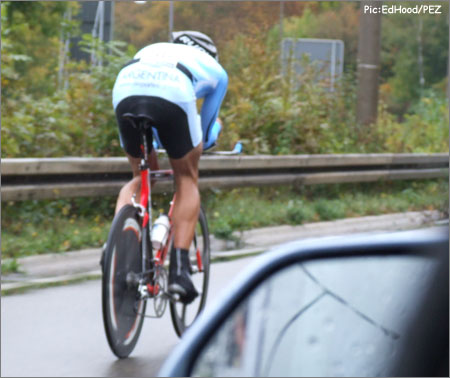 There’s no Latvian, East European reserve in this car, and the mechanic is practically on the roof as he screams; ‘Vamos, vamos, Matias!’ Over the top and it’s the dual carriageway section, it’s extended for the pros to take the total distance up from 38.1 to 44.9 kilometres, flat dual carriageway, nothing to report, It’s actually less technical than for the under-23s because the turn is more straightforward, slip right, turn left across a bridge, then turn left back down the slip. On the way back we cross New Zealander, Gordon McCauley, earlier in the day, he told me; ‘the crappier the weather, the better for me, the colder and wetter it is, the more I like it!’ 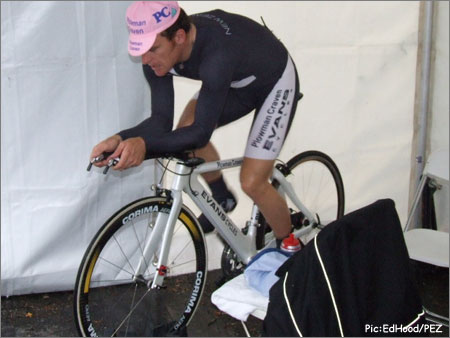 On the return leg Matias is rolling nicely, 55 and 60 kph. On the big descent that takes the riders back into town he glugs a gel, takes a big swig from his bottle, then another swig before he dumps it and gets back into the tuck and up to 85 kph. Its tricky here, lefts, rights, slippery and dangerous, but his lines are good.

There’s a healthy crowd at the railway crossing; looking for a crash, no doubt. Giovanni is big into honking the horn and the mechanic has turned-on the race radio so as it’s deafening in the back seat, cold too as the mechanic has the window open so he can lunge-out and holler; ‘Vamos! Loco! Matias!’ The rain has eased-back to drizzle as we see the shape of James Perry (South Africa) in the distance. One lap done and he tops-out at 65 on the descent before it’s roller-coaster time.

He closes-up on Perry on the drags but can’t nail him on the flat, he inches him back, but doesn’t get him until the red kite and the finish climb, by which time the rain has stopped and there’s little bits of blue in the sky. We have to deviate-off at the finish, and I say my thanks to Giovanni when he parks the car; neither rider Matias or Perry will be high up the rankings, but at least we’ve seen the course and know that ‘Vamos! Loco!’ is the thing to shout at bike races in Argentina. 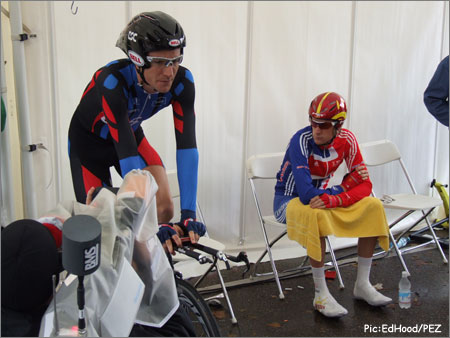 To have a race, you need a course and riders, what do the ‘big guns’ do before they blast in search of glory? Bradley Wiggins’ start time was 15.26, but at 14.20 he was ambling about outside the GB team bus, actually the Barloworld bus, commandeered for the day. David Millar too wasn’t fretting, he was outside the bus, signing an autograph or two but covered by more ‘minders’ than John Gotti. 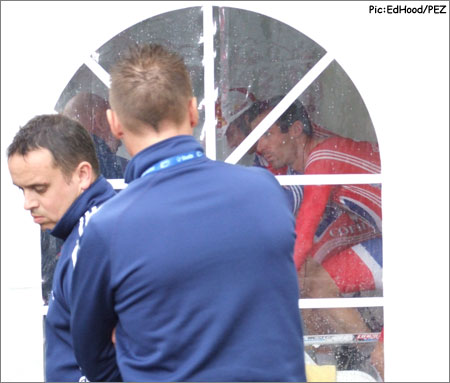 Meanwhile, at the USA tent, Davie Zee, start time 15.27, was already on the turbo, iPod in place, facing away from the entrance so as not to have to make eye-contact with anyone.

At the CSC, sorry, Swiss HQ, Fabian was on the turbo with MP3 Oakleys firmly in place, whilst a sphinx-like Riis chatted at the door, his mere presence made sure that no one got too close to the defending champion. 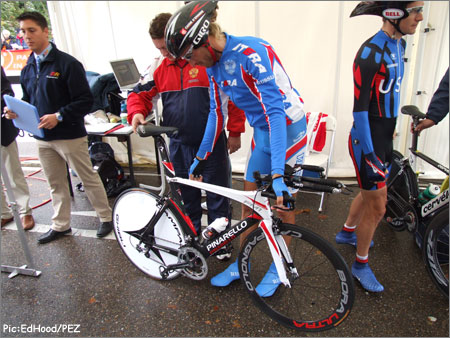 Big Russian, Vladimir Karpets asked a helper to shut the flap on the tent, just as I levelled my camera, hey! Vlad! Don’t be like that! Back at GB, whilst Davie Zee, Fabian and Big Vlad were making the turbos hum there was no sign of time triallists, just those ‘made men’ I mentioned earlier. I went back at 14.50 and Millar was in the tent, on the turbo, with Saunier manager, Mauro Gianetti popping-by for a chat. Bradley? No signs. 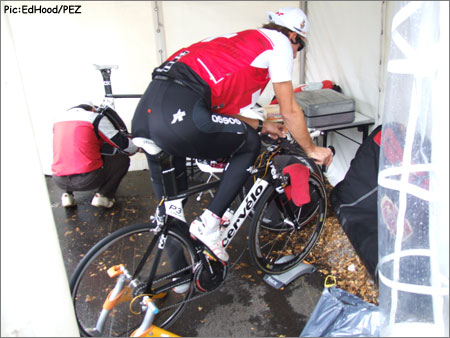 Fabian, meanwhile had opened-up the tent side to get some air, creating a field day for guys like me, desperate for pics of this handsome, charismatic man. As well as spinning his legs, there was more spinning going-on in the tent, as Fabian warmed-up on the ‘B’ bike, the mechanic had the race bike suspended above the floor and wouldn’t let the wheels stop spinning – warming the bearings or ‘tuning compound’ on the tubs? 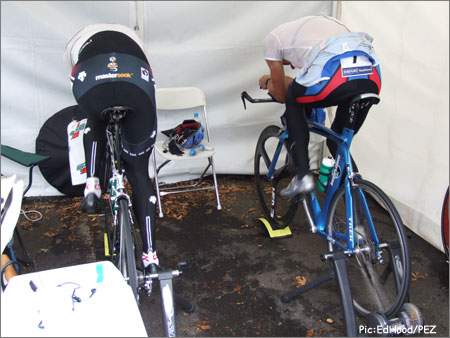 Davie Zee was still spinning and still facing the wall, but with Jason McCartney beside him to keep him company. The noise up at GB meant that David and Brad were both on the turbo, but with the team van parked so that you couldn’t catch site of them, except through the plastic of the tent windows; they spun away, alongside each other, but each in his own world. 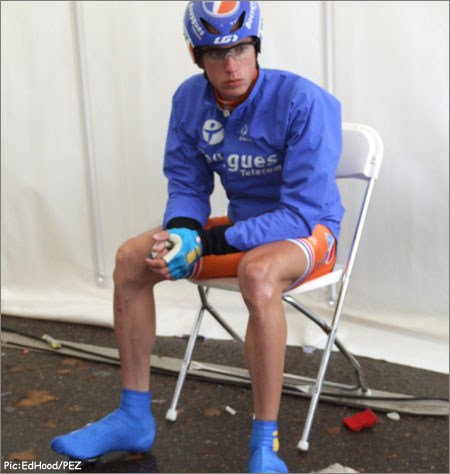 Then it was time for the start house, the equivalent of the walk to the gallows; home boy, Sebastian Lang looked relaxed, but very focused, a man with a job to do, I would have put a few euros on him. Stef Clement (Holland) was nervous, like a greyhound, anxious to see that hare.

David Millar and Bradley Wiggins just didn’t look nervous-enough for me, I could tell it wasn’t going to happen for either of them. Laszlo Bodrogi (Hungary) looked skinnier than I’d ever seen him, usually a good sign. Jason McCartney looked a little over awed by it all. 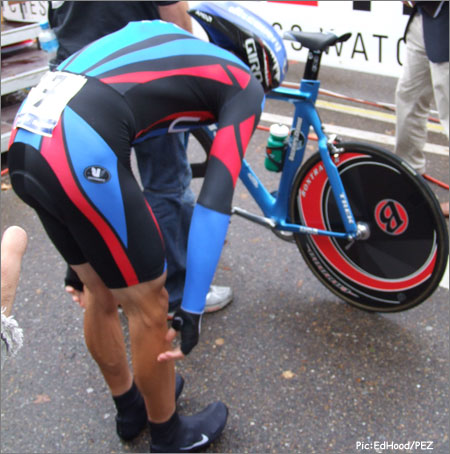 David Zee hasn’t had the form late season and the ‘bike-drama’ wouldn’t have helped, I couldn’t see a medal. Vladimirs Gusev and Karpets looked ‘in the zone’ to me, but Cancellara had an aura around him, relaxed, focussed and determined, it was hard to see who would beat him. 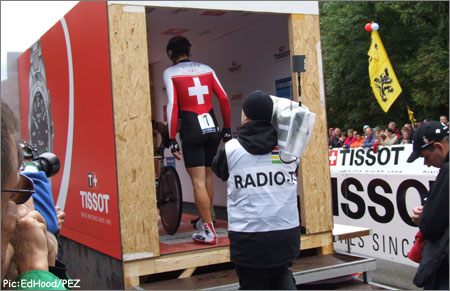 As he rolled down the ramp and the Swiss cow bells clanged, I headed for the press room – now all we need is a result.