Emilia ’07: Finally Frank under the Arches!

He fell in love with this race two years ago on a rainy day in October when he lost the “Race of the Arches” to Gilberto Simoni. Finally, Frank Schleck won this beautiful race on a perfect sunny day of the Italian Fall. PEZ was there, and saw a lot more than just a bike race…

The Giro dell’Emilia is part of the traditional pre-Lombardia tune-up weekend, running on Saturday (this year was Oct 13) and followed by Sunday’s GP Beghelli. The protagonists at Emilia are always in the hunt at Lombardia, which adds to the excitement for both tifosi and riders alike. The Emilia corsa is a kicker – almost 200km in the Apennine foothills near Bologna, with 5 finishing circuits that include a nasty climb to the Basilica di San Luca along it’s famed and historic arches. 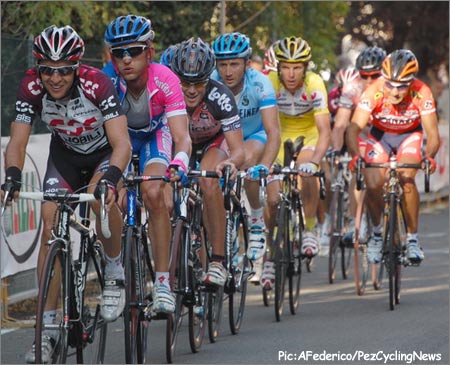 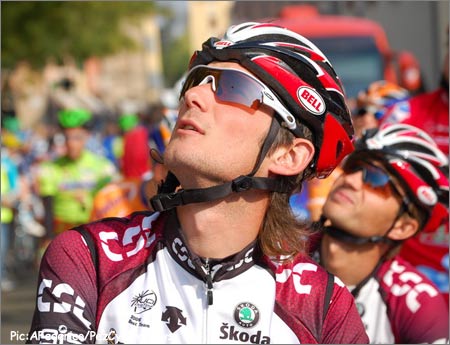 Schleck told PEZ: “This is not a Pro Tour event but I consider it nothing less. That’s why I decided to come here with a plan and with a strong team.”

The organizers have shifted the start from Cento to Formigine, not far from Bologna. Here lives Riccт, the young rider from Saunier Duval. 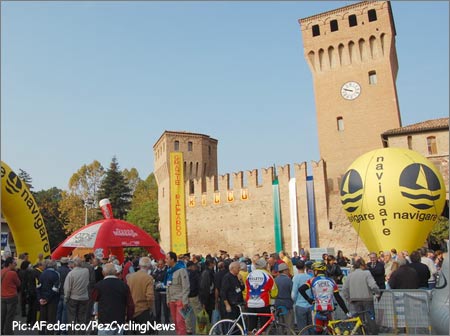 Depart villane in Formigine, the town where Riccт lives. His name is remembered everywhere, including the Castle wall.

I chase the Giro dell’Emilia since many years and despite I honestly don’t like the new entries, I have to say that Formigine really guest so well the depart. Many people in the streets and everybody very well informed about the event and about the cycling in general. 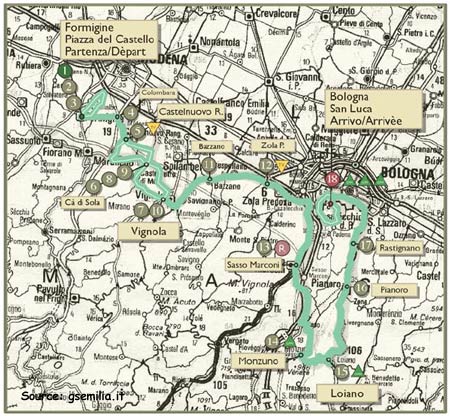 Centered near Bologna, the Giro dell’Emilia runs 198.8 km through the Apennine foothills.

So everybody was more or less around the big motor-home of the big Teams waiting for Bettini, Di Luca and Riccт of course! 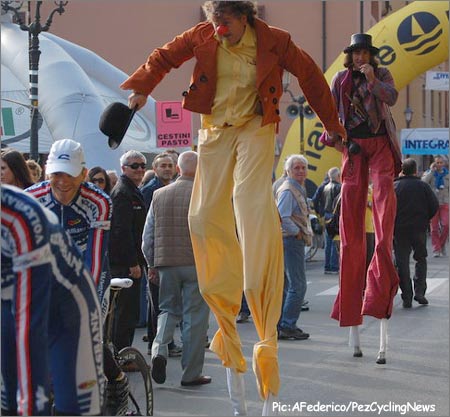 The first pursuit of the day.

At the departure village was organized a festa with acrobats and parachutists to entertain the tifosi waiting for the riders. But at last this show was really appreciated by the riders themselves. 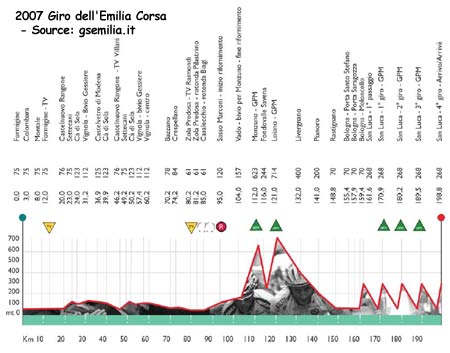 The saw-tooth corsa makes a perfect lead-up for this week’s Giro di Lombardia. Get a load of those finishing circuits… 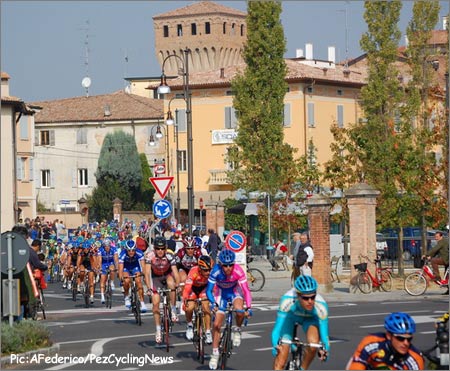 The race started at 11:00 and it bounded fast to the Apennines behind the city of Bologna. I’ve left the race route and driven directly to San Luca because that is the key point of the race and parking on the top, even though reserved to the press, is so small that it’s not always easy to find a place. 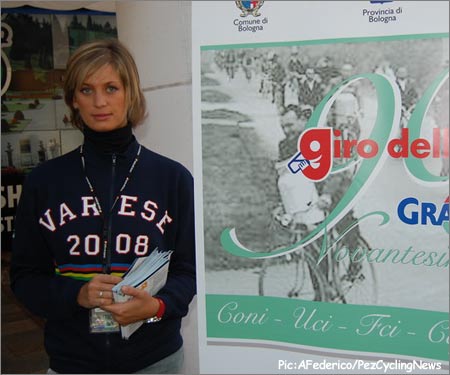 Welcome to the press accreditation area… Well I don’t mind if I do…! 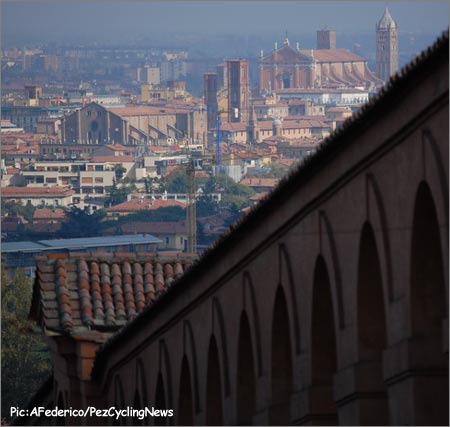 The city of Bologna nearby. 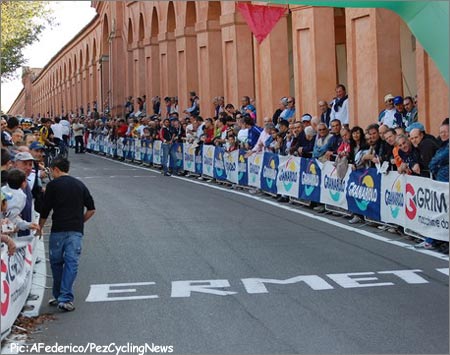 Under the Arches is the place to be.

Once on the top every effort will be paid by the amazing view and the spiritual peace of this place. The city of Bologna lays quietly down in the plain, while the San Luca road accompanied by the Arches, climbs hard on the hill.

Bologna shows its treasures: the gorgeous San Patronio Cathedral located in one of the most beautiful squares of Italy and its towers; it’s half past one in the afternoon. An Italian fall afternoon with everyone at home to enjoy the weekend. But not today. Many people are here, already under their Arches, as happens every year. It’s half past one and I feel hungry. 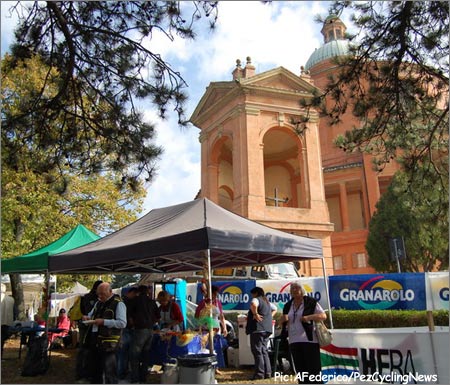 The great buffet offered by the organizers beside the San Luca Dome.

Every year the organizers prepare a very nice buffet just beside of the San Luca Dome. 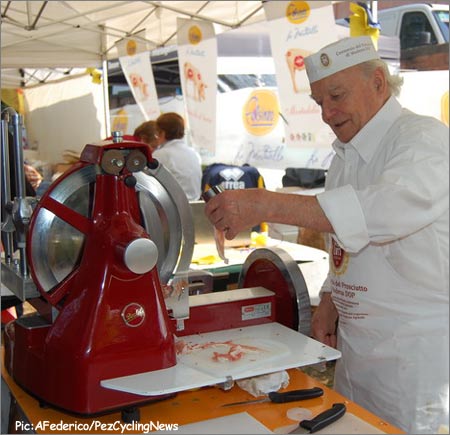 The slices of just cut “Prosciutto di Modena” are too attractive for resist. And the delicious cakes prepared by the ladies too. 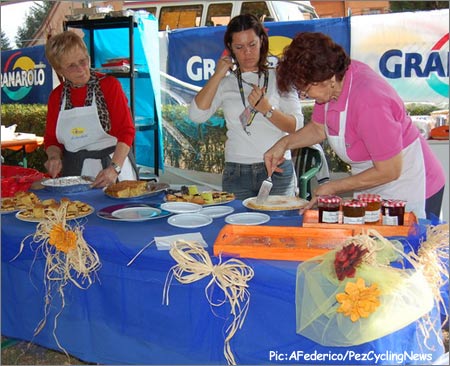 Tastey cakes served by friendly ladies, a local recipe to waste time and gain some weight.

This buffet is offered to everybody working around the event: journalists, photographers, partners, sponsors. It’s also a good chance to meet people that you usually just see for few moments at the departure village or during the confusion of the arrivals. 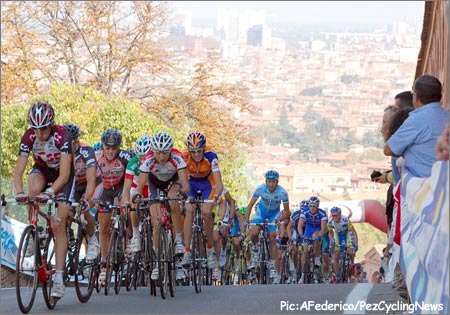 The race hits the first ascent of the San Luca climb, and CSC prepares everything for their captain.

Without losing too much time to cakes I start to descend all the way down and while I’m doing it I can listen the race report from the loudspeakers fitted everywhere. I really must say that the organizers prepared the race without any fault. 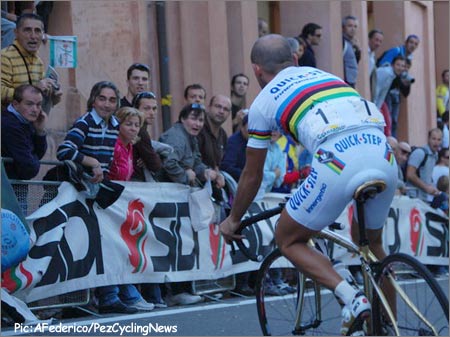 The San Luca circuit has been, as usual, a great show. The “Bolognesi” are crazy for their race and the screams where so loud, amplified by the arches, that the voice of the speaker was never more audible. Everybody was upset about Bettini’s abandon after just a lap of the four planned but probably the World Champion is strongly thinking to Lombardia. 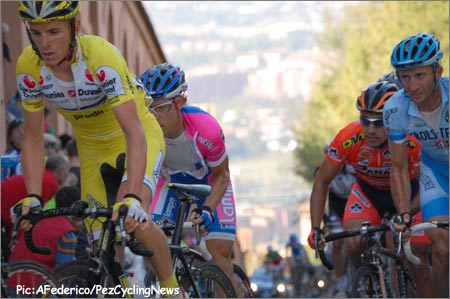 Riccт, Cunego and Rebellin. The Italians are as always protagonists of this race.

Not Schleck, not Rebellin. They were the last two to contend the final trophy. Just behind them, a surprising Horner who finally was able to take third place. He was dropped during the last kilometre where the highest slope surprises everybody, but he regained his composure while Cunego and Riccт were rejected, until he finally found Schleck and Rebellin’s wheels in the last 300 meters. In that moment Schleck decided to leave everybody and there were no more chances for Rebellin, or Horner. 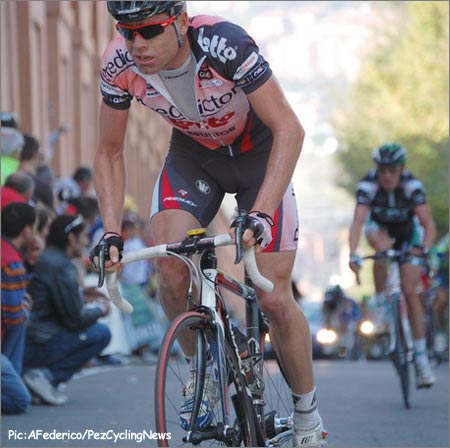 After a very long season Evans has got still enough power. He is looking forward to the final Classic of the year. 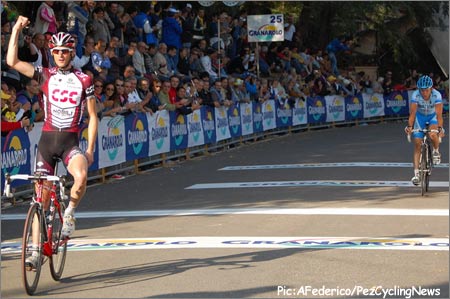 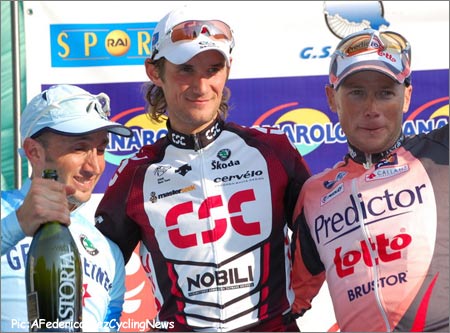 Schleck at the top – Rebellin and Horner filling in the podium. 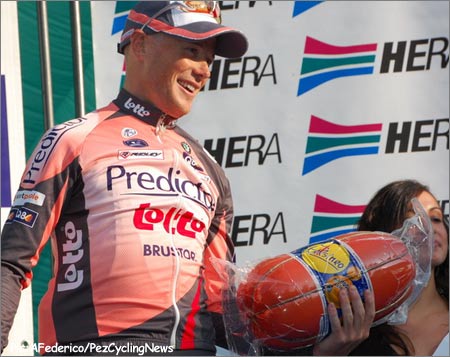 Chris Horner asks the crowd for advice on how to dispose of a sizeable mortadella. 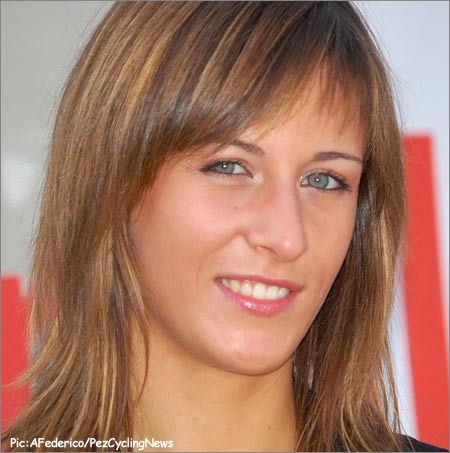 What day would be complete without a smile…?

The late afternoon is quite over there. When I get out from the press room, the sun is still shining through the yellow leaves. The last two year’s were so wet and rainy that it looked to be part of a night time event. Still the operators are working with the barriers but there are no more people around. The parking at the top is almost deserted and I relax a while before to returning home.

This Saturday the Giro di Lombardia will close this cycling season. But now that sad moment looks so far for me. I have still one week to dream about wheels rolling. Nothing else is important now. Since, closing my eyes, I will be able to feel the wheels rolling through the Arches.