Italy’s Davide Rebellin made it a double for Gerolsteiner when he defended his Pro Tour leader’s jersey in the best possible way with a fine win in Fleche Wallonne, adding to the spoils already gathered by team mate Stefan Schumacher in Sunday’s Amstel Gold.

At 35, Rebellin has a few more wrinkles and a bit less hair than in the days when he was nick-named ‘Tin-Tin’; he’s been a pro since 1992 and its ten years since he won his first classic, at San Sebastian but he’s lost none of his class. None of the top three at Huy were strangers to the Fleche podium, Rebellin won in 2004 as part of his fabulous Amstel/Fleche/Liege treble, second placed Alejandro Valverde (Spain & Caisse D’Epargne), winner last year, scrabbled to second place, six seconds down on Rebellin but ahead of third-placed Danilo Di Luca (Italy & Liquigas) who won in 2005. Di Luca and Valverde rode great final kilometres; both well-down the bunch at the bottom of the Mur, unlike the canny Rebellin whose positioning was perfect. 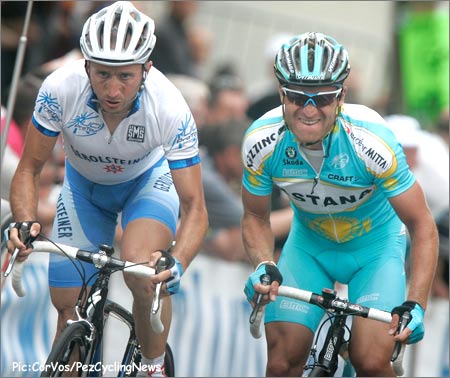 Davide Rebellin made a huge return to the stage of his triple triumph by storming the Mur de Huy for the Fleche victory.

At the foot of the ‘Mur’ for the last time with only 1300 metres to glory or heartbreak it was a huge group charging into the final right hander, a quality late break which included Valverde and Di Luca had been snaffled by a surprising AG2R train which looked as if it was in the last two K of Paris-Tours rather than an Ardennes classic.

The man who showed his hand first in the finale was Astana’s Amstel hero, German Matthias Kessler, who only has one style of riding; ‘go for it!’ as he attacked the gradient with all he had left. Rebellin was there and it looked as if rising-star, Riccardo Ricco (Italy & Saunier) was going to enjoy his first-ever view form a classic podium; but early season stage races are one thing and Ardennes Classics are another and the precocious Italian faded to fifth as Kessler and Rebellin ground onwards and upwards.

Rebellin’s move was decisive, opening a huge gap of six seconds on the line where late-coming Valverde and Di Luca denied Kessler the taste of champagne.

The reason for the AG2R purge became clear as their Italian, Rinaldo Nocentini showed his win in the GP Miguel Indurain was no fluke, with a fine sixth place; Frank Schleck’s (Luxembourg & CSC) seventh will be of no use to Bjarne Riis but AG2R packed another rider into the top ten with last year’s Giro surprise, John Gadret (France) in eighth – it should be a happy hotel for them tonight.

The man in ninth place is one to watch, Dutchman Robert Gesink, only in his second year with Rabobank and not 21 until May. Rounding-out the top-ten was Tadej Valjavec (Slovenia & Lampre) who will be worth watching on Sunday in Liege after his seventh place there last year.

The inevitable early-break was instigated by Freddy Bichot (France & Agritubel) at around the 40 K mark and he was joined by David Loosli (Switzerland & Lampre), Christophe Le Mevel (France & Credit Agricole) and Gorka Verdugo (Spain &Euskaltel). The Basqueman – as the German commentators call them – was last to succumb with 34 K to go.

The last hour was action-packed but inconclusive; Wallonne-star, Philippe Gilbert (Francaise des Jeux) crouched-low and went for it, breathing deep and looking strong, but he was too big a fish to be allowed to swim-off. A large group which had Aussie Michael Rogers (T-Mobile) as an animator tried, but was soon back in the fold; a combination of consistent high speed and a failure to find the right chemistry in the break meant that names were written in the Pez notebook then almost immediately crossed-out.

It would take a strong-man to break the chains – right on cue and with half-an-hour’s riding left, Russian champion Sergei Ivanov powered off the front; old-style Soviet, flat back, knees over-lapping his elbows and the big gear turning well, “Kazakhstan Railways” is written across the back of his shorts – very appropriate.

Another of Saunier’s “coming-men”, Juan Jose Cobo (Spain), bridged-up and this looked serious as the time gap stretched to 27 seconds. The rule of thumb is that a small, fading break will need around 40 seconds to survive a rampaging bunch on the Mur; Di Luca had obviously read this too and attacked with a very strong-looking duo, comprising Kim Kirchen (Luxembourg & T-Mobile) and Valverde’s Caisse D’Epargne picador, Joaquin Rodriguez.
From this move riders ebbed and flowed, with Valverde bridging-up and as the descent pushed the race ever-closer to the Mur, most were thinking; “Valverde”.
He had Rodriguez on the attack and was sitting-pretty with Di Luca and Kirchen, ready it seemed, to make the counter-move as soon as Rodriguez was caught.

The unusual sight of AG2R en masse changed everything though and it was all down to the Mur.

Fleche07: The Women Get Tough