“Old” and “new” T-Mobile combined today to teach the cream of the world’s classics talent a lesson in tactics, as Germany’s rising-star, Marcus Burghardt confirmed his promise with a superbly taken win in Gent-Wevelgem.

Meanwhile, Britain’s Roger Hammond, one of the few to survive the “post-Ullrich” cul at the German telecom team, took a brilliant second place behind his lanky teammate. Burghardt’s win was Hammond’s win and if there was a “man of the match” award it would surely have gone to the stocky Englishman who has always ridden well in this race.

The prime victim of the men in pink’s tactical coup was none other than three-times world champion and double Primavera winner, Oscar Freire (Rabobank), acknowledged as one of the foxiest men in the bunch. Freire finished third, his head slumped low between his shoulders as two sets of pink-sleeved arms reached skywards in front of him. 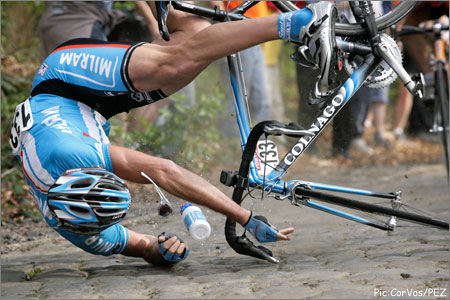 For the second year, the ‘sprinter’s classic” produced an inspiring finale. Unfortunately, the race was also marred by a number of bad crashes, with riders bouncing around the cobbles of the Kemmel descent like rag dolls; perhaps the most seriously injured was Jimmy Casper (Unibet) whose race ended in an ambulance. 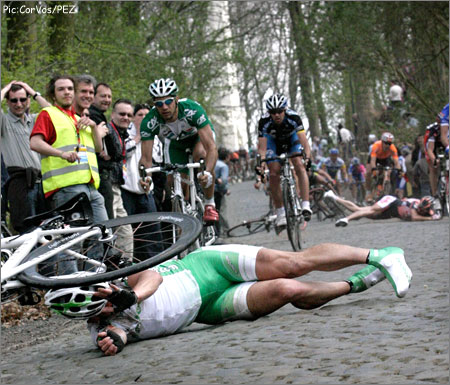 The move of the day went away after around an hour’s riding and contained Hammond; French champion, Florent Brard (Caisse D’Epargne) and Christophe Mengin (Francaise des Jeux) and stayed clear until 25 to go when a group comprising Freire, Francisco Ventoso (Saunier) and Burghardt pried itself free of the bunch and caught them – the two Spaniards belying their “sprinter” labels.

Despite what looked like a committed chase, the gap grew and whilst the two French riders understandably dodged spells, Hammond worked like a Trojan, already thinking that a surprise could be sprung. On concrete section roads traversing the greenest of Flemish grazing land and the richest of red soils the six hammered away at the job. 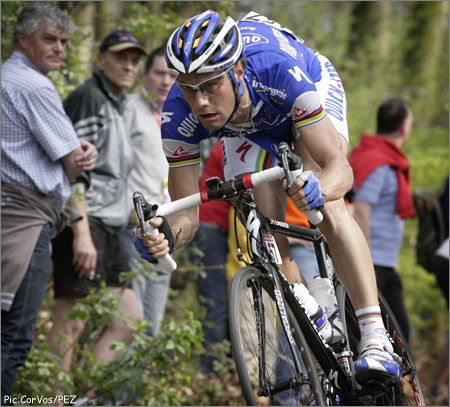 Quick.Step rode hard on the front to try and bring it back, using, notably, Peter Van Petegem for the work, but there was nothing doing in the end. The run-in was just too fast, and there was no real speed differential between the break and the chasers.

Behind, CSC, Lotto and QuickStep rode hard, with the motorbike speedos reading 55 kph, but still the gap grew, due in no small measure to Hammond and his gargantuan spells. With 11 K to go the gap was 51 seconds and scribes like me were already writing, “Freire” at the top of the result sheet. Still Hammond rode, Brard had cracked and gone, Mengin did what he could, Ventoso looked good and so did Burghardt – Freire was Freire.

Just outside one kilometre to go, the gap was down to 22 seconds, but that was more than enough. Burghardt’s move came there and his jump was, ‘all or nothing’ – he immediately got the gap. Freire kept the cards close to his chest and gambled on a Ventoso chase. 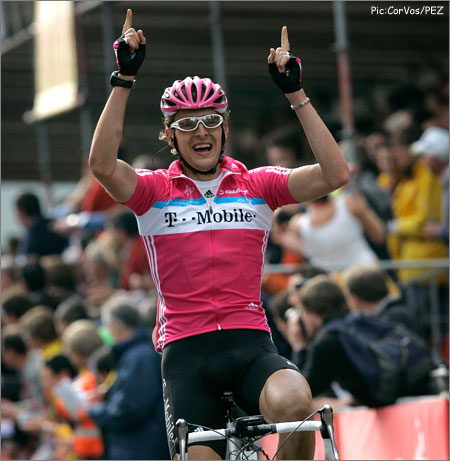 Marcus Burghardt pulled off his first professional victory today – and what a fine way to get started.

But for once Oscar played it wrong, Ventoso had cracked and would finish fourth; Freire had to go himself. Hammond was magnetically coupled to the man in orange though and was not to be denied. As Freire realised he’d blown it, Hammond jumped, the Spaniard’s heart had gone, and a delighted Hammond crossed the line in second place with arms high as ahead of him, T-Mobile’s ‘fresh-start’ policy was more than vindicated.

Chasing Flanders: Inside A Classic Race!