Well, sort of, the day was similar to Roubaix in that the early break went the distance – an altogether rare occurrence and now we’ve had two early breaks take it to the line in two days. A tailwind blew the Tour de Georgia peloton at just under 29mph average from Peachtree City to Macon today, where Tinkoff rider Daniele Contrini attacked solo from a five-man break on the finishing circuits to take the stage and the race’s first leader’s jersey.

Today’s gusting winds were more than welcome, not only for the added push for the peloton, but for the positive effect on the weather, blowing in sunny skies and 60 degree temperatures to replace the rain and chill of the pre-race weekend. 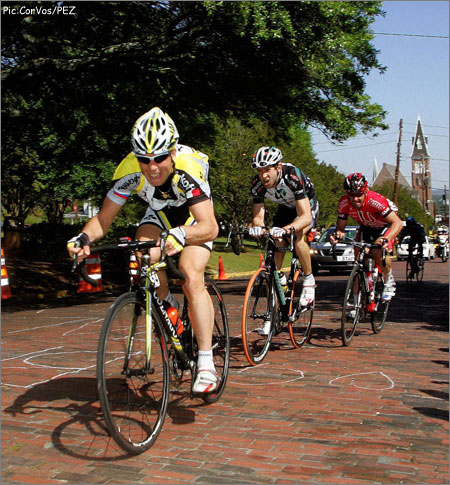 The Macon circuits were anything but simple, and Contrini used the brick climb to make his winning move.

Despite the expected dominance by the loaded-roster ProTour teams, Discovery and CSC in particular, the day’s racing was made by the “little” guys, particularly Navigators, who put both Belarussian rider Victor Rapinski and Australian Ben Day in the big break of the day. The final time gaps could be significant later in the race, especially for Day, who took 3rd on the stage and 39 seconds on all the contenders in the main field. 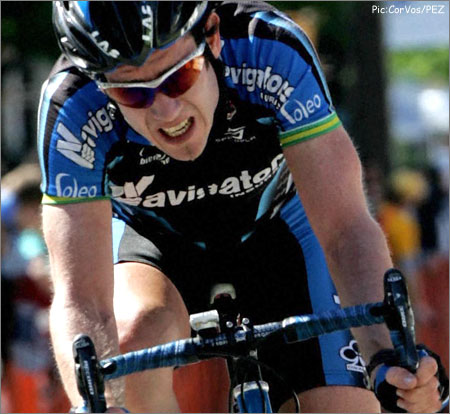 Ben Day made it a good one with third on the stage and some valuable time in his pocket to take to the time trial and mountains later in the week.

Day, who took 8th overall at the this year’s Amgen Tour of California, is a decent climber and a strong time trialist; he took the TT silver medal at last year’s Commonwealth Games. Rapinski took two of three intermediate sprints and, though dropped but good on the run-in, took the most aggressive award and is still well-placed in the chase for overall points. 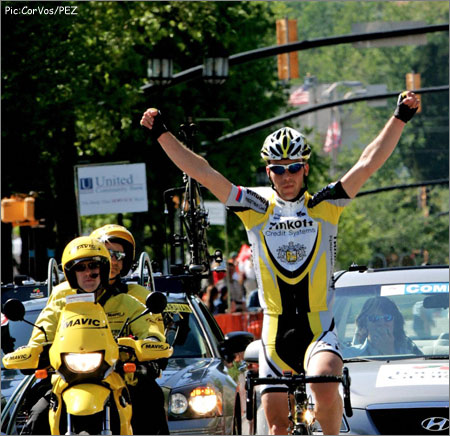 Contrini took the win by a comfortable 21 seconds over an excellent Doug Ollerenshaw.

HealthNet got in on the action as well, with American Doug Ollerenshaw helping drive the break and trailing in Contrini for 2nd, gaining :46 on the bunch. Ollerenshaw, a solid climber, is rounding into his best form since breaking his hip at the 2006 Trophee des Grimpeurs. 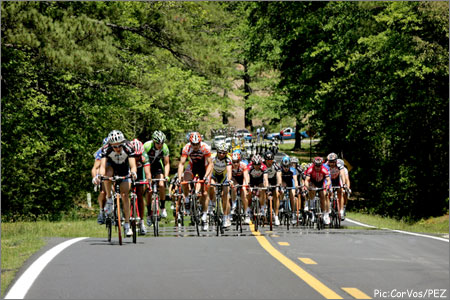 Despite the high-speeds, the attacks started from just a few miles out of Peachtree City, with Colavita’s Adam Bergman launching one of the first moves. Various breakaway combinations tried and failed before a group coalesced around Rapinski, who has soloed away from a large group before the 1st intermediate sprint at Zebulon, 30 miles into the race. The Navigator rider cruised on his own through the number two sprint at mile 56 in Forsyth, before sitting up and waiting for the nearest group of chasers. With Rapinksi, Ollerenshaw, Contrini, Day and BMC’s Michael Sayers, this group stayed together until the? first of the three 2.5 Macon finishing circuits, where Contrini finally got clear. 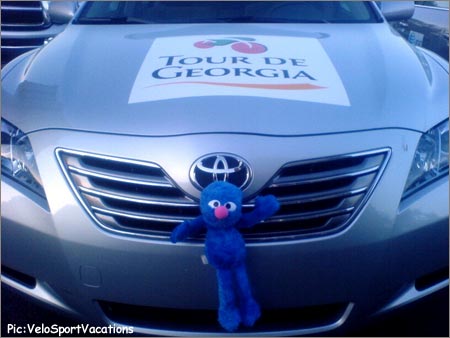 Notes & Nonsense
* Kudos to Discovery mechanic Vince who had the tools and savvy to fix the jammed Tour press-room stapler. With the event on a tighter budget this year, having the single existing staple device out-of-service could have held up results and worldwide press coverage, and generally left many pieces of paper floating aimlessly.

* Local favorite Cesar Grajales, back with the Georgia-based Jittery Joe’s squad in 2007, rode near the front at times and showed no hesitation on the finishing circuit, finishing in 29th near the front of the main group. Still wearing a protective sling while not riding, the Columbian said this morning: “I”m not sure how it will go, but I will do what I can. I just want to race”

* Arton Grovehr, a neutral support mechanic, found a perfect slot with one of the follow vehicles (see attached photo). Cheered wildly by the crowds of school children lining the route to Macon, Grovehr hopes to maintain his ready-for-action position throughout the race.

Roubaix Rides: Look At Those Bikes