The real story at today’s Tour de Georgia was NOT the high overall speed of the winning eight-man break, lead in by stage winner Gianni Meersman of Discovery. The Belgian, also the event’s youngest rider, handily out-sprinted the rest of the lead group, who covered the 118 miles and four categorized climbs in a rapid average of 25.95 mph. But to really understand what happened today, you should look to the average of the main field — 23.44mph — which well and truly explains the 29:07 gap between the two groups. 29 minutes!

Though most predicted a minor sorting out of riders on Stage 3, the first truly hilly stage, the monumental narrowing of contenders for the overall was a complete surprise. The exact reasons for the two-speed racing today are hard to pin down, but certainly the composition of the group that got clear was key. Nine different teams were represented, including both CSC and Discovery. Among the six, Tinkoff chased a bit initially, but with only six riders it made little sense. They lost Contrini’s yellow jersey that was sure to go soon anyway, while remaining fresh to defend his sprint leader’s jersey. Predictor-Lotto also tried to push the pace, but just didn’t seem to have the horsepower to make any difference. 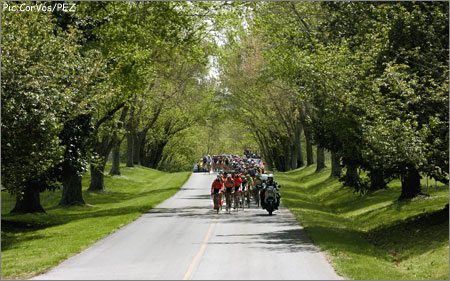 North Georgia is a damn fine place to be in Spring.

Prodir’s David Canada hung on to the key move to benefit from the enormous time gap, taking the AT&T leader’s jersey from three-day wearer Danielle Contrini (Tinkoff). But few expect the Spaniard to keep the jersey over the next two days, as two of his breakaway companions from today are now the clear top challengers for the overall victory. Discovery’s 23-year old Janez Brajkovic, who finished fifth overall and was Best Young Rider in Georgia last year, also made the front group, jumping into 4th place, just three seconds back on GC. He is a good bet to take back those seconds and much more from Canada, especially given the profile of tomorrow’s time trial and next day’s mountain-top finish. 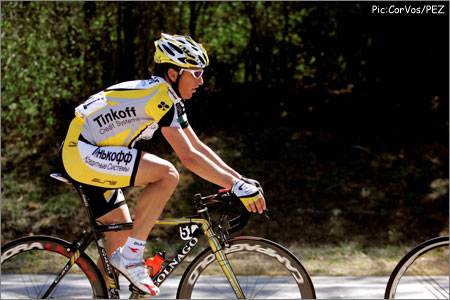 The returning Tyler Hamilton had a nice, relaxing day in the saddle…and lost 29 minutes.

More likely to push Brajkovic is American Christian Vandevelde, who was boosted to 3rd place, (on equal time with Brajkovic and five others), also by following today’s key move. The CSC rider doesn’t have quite the same team strength to play with as Discovery at this year’s race, but is a good time-trialist who can climb well, though perhaps not as well as Brajkovic, who was 5th at last year’s Brasstown Bald finish. But both have shown very good form early this year, with the Discovery rider scoring top-five overall finishes at the Tour of Valence and Tirreno-Adriatico, while Vandevelde scored a 7th in the GC at the Amgen Tour of California. 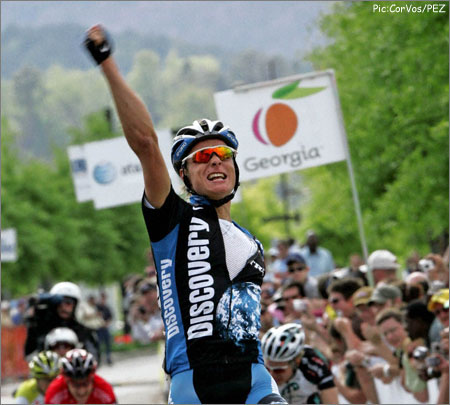 Gianni Meerman took the biggest race of his career on the Chattanooga riverside.

We’ll have a much better idea after tomorrow of the relative form of both riders, as they contest a difficult 18.9 mile ITT from Chicamauga up to the top of Lookout Mountain.

Notes & Nonsense
– Race caravan members came up with a new game today, with loose rules evolving around the concept of made-up team names, assembled using words from the names of teams actually in the race. Examples: StepOff, QuickStream Health. You get the idea. Pez will be laying out a pair of socks to the person who sends in the most creative name by the end of the TdG.

– The USA Development squad, though not able to put anyone in the break, took the top two places in the “field sprint,” with Nick Reistad and Chad Beyer leading in the laggards. Evidently, it all started as a joke as there wasn’t much to sprint for, but it turned serious soon enough and certainly provided a good show for the crowd lining the home-straight.