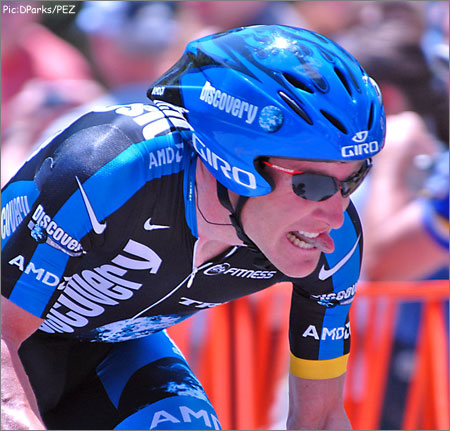 Levi Leipheimer was once again the man in the time trial in a big ol American stage race.

Over the uphill first half of the 18.9 miles, the habitually slow-starting Brajkovic conceded nine seconds to CSC GC hope Christian Vandevelde. But the 23-year old Slovenian, the U-23 TT World Champion in 2004, finished the final nine miles strong to gain a total of twelve seconds on Vandevelde and take over the AT&T race leader’s jersey. The two finished 11th and 12th on the stage. 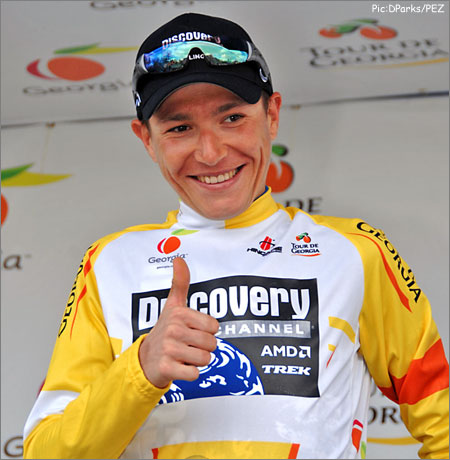 Brajkovic was mighty pleased to be numero uno after the TT.

With the race’s only mountain-top finish looming, the terrain seems to favor Brajkovic and he was all smiles and confidence post-stage. “Our plan for tomorrow is good and I think it will succeed.” When questioned as to the “plan,” the new race leader said, “To win the stage and the overall.” 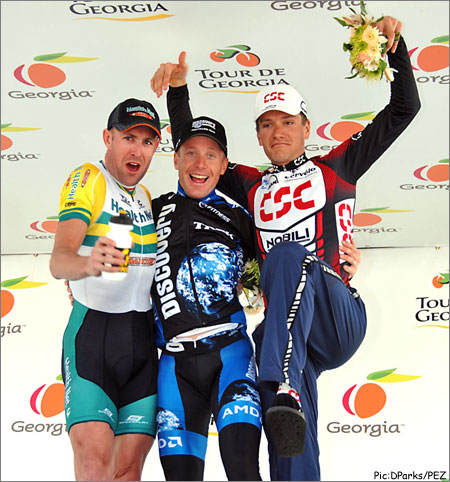 It was all fun and games on the podium today.

The man who started the day in yellow, David Canada (Prodir), finished 39th on the stage and dropped all the way to 5th overall. Teammate Rubens Bertogliata, also in the race-breaking move yesterday, finished 23rd in the TT, which is normally not good for much. But this was the 3rd-best effort from those who gained 29 minutes on Stage 3, so he moved into 3rd overall, giving the former Tour de France stage winner a shot at the final podium. 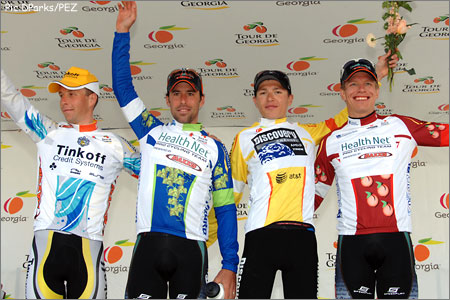 The jerseys after four days.

Though Discovery appears to have the race well in hand, the terrain for tomorrow’s Stage 5 provides plenty of opportunities for good racing. Besides the HC finish atop Georgia’s highest peak, Brasstown Bald, the 107-mile route includes two other categorized climbs. Health Net’s Jeff Louder leads the mountains classification, but with five riders within six points, there’s ample incentive for an animated stage.

Notes & Nonsense
– Dalton, the stage start town tomorrow, is noted in race information as a producer of “90% of the functional carpet in the world.” If anyone knows the numbers for “non-functional” carpet, please let us know. 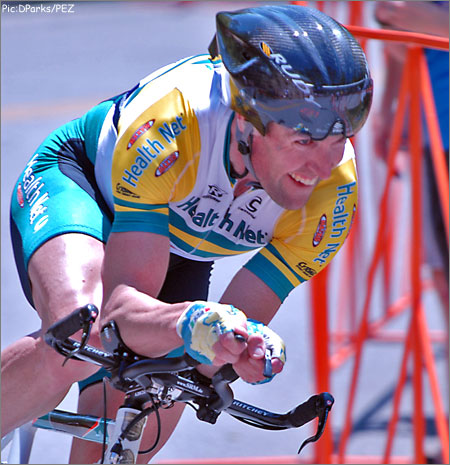 Nathan O’Neill was once again the best domestic rider in the Tour of Georgia TT – he was 3rd on the day. He also wins the prize for thickest chest on the planet I think. Barrel-chested doesn’t do him justice.

– If you’re planning to catch the Tour de Georgia live in the remaining few days, wouldn’t you like to impress your friends with you suave and smooth pronunciation of the current overall race leader’s last name? Of course you would. We checked with him after the stage today and what he said sounded like: Bry-ko-vitch. Just roll the “r” a little and put the emphasis on the first syllable. Or call your Slovenian girlfriend for help. 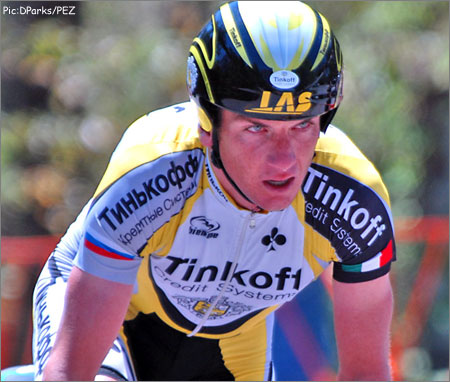 Many thought Tyler Hamilton might pull off a big ride today…he didn’t…he was 41st.

– CSC’s Vandevelde almost didn’t survive his warmup for today’s stage. Riding part of the course in reverse just before the start, he was mid-road on a small, curvy hill when an oncoming caravan vehicle came at him suddenly from around a bend. After a brief Texas two-step, the car jammed on the brakes, Christian eased by and everyone laughed. Nervously. 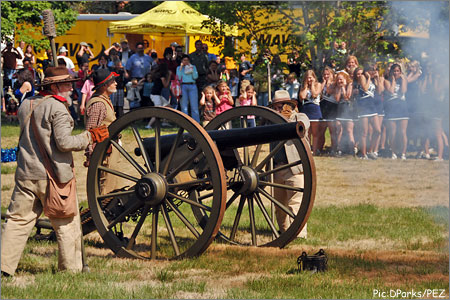 The time trial started today to the sounds of a cannonade.