Today’s Stage 6 in Georgia finished with the predicted field sprint, but the wild, downhill finish and the day’s racing action leading up to it were both better than most expected. Predictor Lotto’s Freddy Rodriguez, the last year’s Tour de Georgia overall sprint champion, lived up to his “Fast Freddy” nickname.

Freddie narrowly held off CSC’s JJ Haedo at the end of a tumultuous 40+ mph field sprint at the end of two finishing circuits in Stone Mountain Park. George Hincapie, the Discovery Channel classics star, took 3rd, showing signs of life in his first racing action since breaking his wrist in the February Amgen Tour of California. 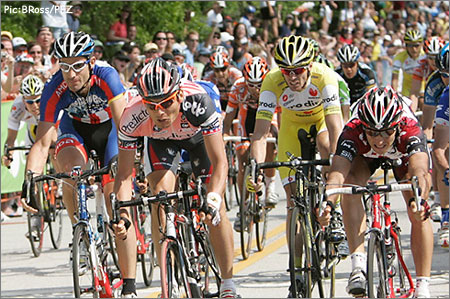 It was a close sprint…and it was FAAAST.

The 113 mile stage started at Lake Lanier Islands, GA and once initial neutral stretch leaving the recreation was passed, the speed went up over 30 mph. There was little reason to doubt the initial goal, a $2000 special prize at the 1st intermediate sprint. in Buford. Karl Menzies (Health Net) took the cash in front of a large crowd lining the streets of the small town of Buford. More attacks came immediately after the sprint and at different times several group of 20 or so riders got clear, only to be brought back. A brief solo from one of these groups by Prodir rider David Millar was also doomed. 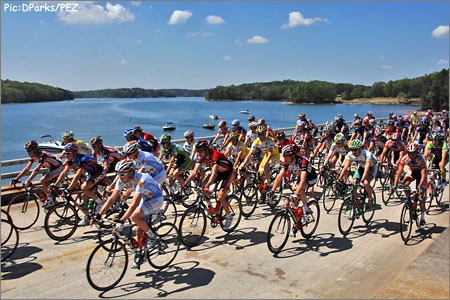 Even the boats took notice of the peculiar sight of over a hundred bikers rollin by.

Three riders finally snuck off at the day’s feed zone, near the 46 mile mark: Maarten Wynants (Quick-Step), Glen Alan Chadwick (Navigators) and tall-man Olivier Kaisen (Predictor-Lotto, 6’5″). Once the initial pursuit ended, the three pounded out a solid gap, eventually moving to a 6:30 advantage on the main field. But with mostly flat or slightly rolling terrain, once Toyota United and CSC starting chasing, the gap fell quickly. 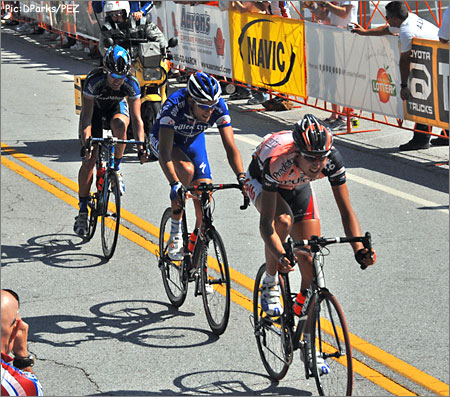 The trio held strong for quite a long while…but it was brought back…as most breaks are…sometimes.

Though they hung on for over 60 miles, by the time the lead trio hit the 7.6-mile park circuit, the gap was down to around a minute. As the surging field pressed closer, Wynants got clear of the two others, but all three were reeled in just after the start of the final circuit. 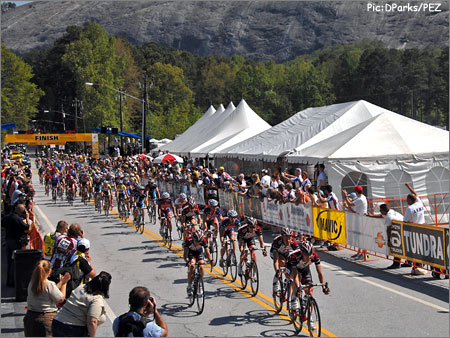 Stone Mountain provided a nice backdrop to the fantastic finale.

With CSC trying to control things for Haedo, the pace stayed incredibly high, fueled as well by a series of never-say-die attacks from the Health Net riders. Rodriguez, protected by the early tactical escape of Kaisen and then well-sheltered on the circuits, followed the wheels in most artistic fashion to hit the front at just the right time. 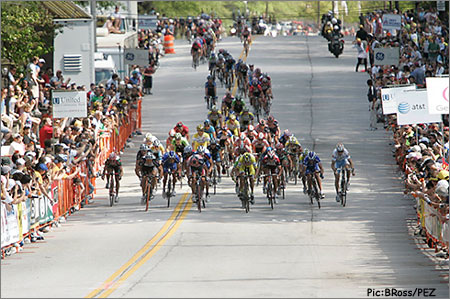 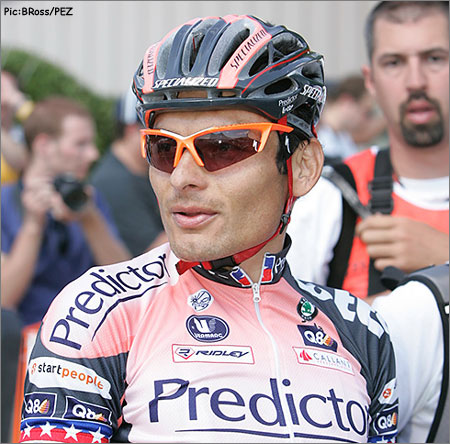 Freddie was a happy man post-stage.

Discovery Channel had little difficulty defending Janez Brajkovic’s overall lead, and there is almost no chance he’ll lose it on tomorrow’s final stage, a 67 mile circuit race in Atlanta’s Centennial Park. We do, however, expect a battle royale for both the stage and the overall sprint competition as Haedo holds a minimal one point lead over Rodriguez.

Notes & Nonsense
– Grover had another banner day catching the show from the grill of the Media 1 car. Besides the smooth, sunny roads of Georgia, the blue guy on the bumper did, in fact, see the first banner with his name on it (in blue paint!). He thanks all his fans for the support and hopes to see you at the final circuit race tomorrow. 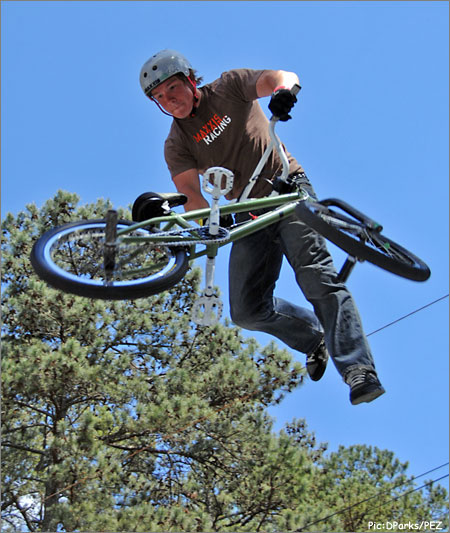 – The teams and staff spent Friday night at a variety of hotel properties not too far from the base of Brasstown Bald, including several in Hiawassee, GA. It’s a beautiful area, but the H-town only has one place with a liquor license, and you can imagine the crowd on a Friday night. Should be easier to get a cold Terrapin in Atlanta, and maybe a bit less risky!