It’s Lombardia Week on PEZ! One of our favorite times of the year – when hard bike racing, a beautiful corsa, and fine Italian food and wine set the stage for the season’s last big race. Our Italian correspondent Ale Federico gets us started with his replay of the 1997 edition, where the outcome was enough to makes cynics of us all.

Ten years have passed since the first time I traveled to see the Giro di Lombardia from the roadside. That time the race route was different from the current one and the key climbs were located in the northern area of Bergamo. 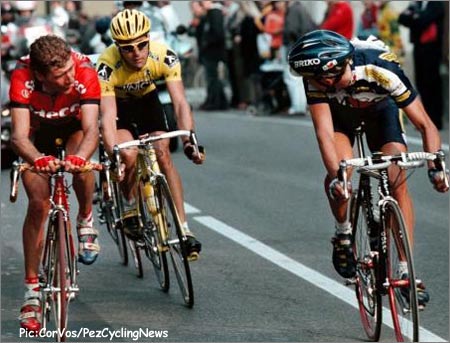 Michele Bartoli speaks his piece as the break heads for the finish.

The Ghisallo climb was just touched during the first part of the race and the final selection was left to the Colle del Gallo, a remote climb in the Bergamo valley.

I was a student and it was difficult for me to travel to a race because I was always without money, but that time I decided to find the way to collect every coin and invest them in my favorite hobby: race chasing.

I remember it was a cold October but that morning the weather was nice, one of those days that you frequently experience during the Italian fall. Just a light mist rising from the fields and the rivers reminds you that the season is falling fast toward the dark winter. 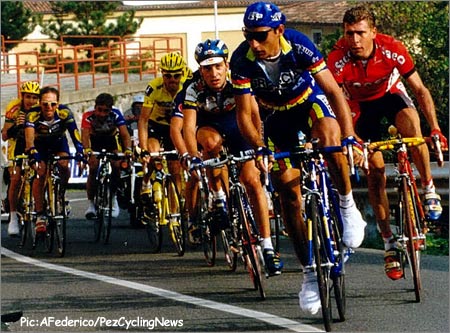 On the Colle di Gallo, Casagrande readies his attack, which only Lanfranchi (in lead), Bartoli and Jalabert will follow.

The Giro di Lombardia is a very particular race. First of all it is the last one of a long season. This means that the favorites are just the few who still reserve some power in their legs after so many races. There are also some riders who need to make a great performance to renew their contract for the next season. Others are there just to complete the start list. In 1997 there was also the World Cup and some riders were still focused on the overall standing. For the 1997 edition this was a very important fact, as we’ll see….

Back then it was the old good times when Musseuw was considered the leader for the Classics, but many others were able to contend for these races. Jalabert, Bartoli, Tafi, Sorensen were all considered threats for the hardest one day races. The Lombardia was too hard for Musseuw, who dedicated his seasons, as Boonen does today, to the Spring Classics and the Worlds. Bartoli was coming from a bad result in the Worlds. 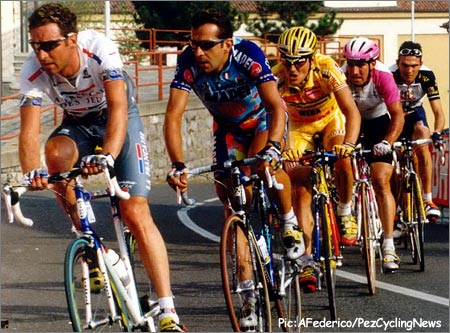 Max Sciandri chases, while Virenque fills in the frame.

Intrigue At The Worlds
Just a week before in San Sebastian, Brochard surprised everybody by winning the rainbow jersey while the “stars” were controlling each other in the second group. Bartoli and Jalabert were looking at each other while Brochard left them in the dust: Jalabert was Brochard’s captain and that explains why he didn’t move. But what about Bartoli? Well, inside the Italian team there were so many troubles: Tafi and Bartoli were like a dog and cat. During the last kilometers Bartoli expected help from Rebellin and Casagrande, but he didn’t received it.

These guys were also fighting for the World Cup final standing… which set up an interesting pre-race situation at Lombardia.

Back to that day at Lombardia, there was so much to think about before the race that what happened on the road surprised me. It all happened so fast that I really cannot say today that I remember much of the race but luckily there are some pics that help me. 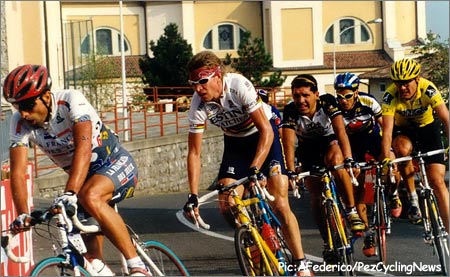 I choose to stay on the Colle del Gallo and I was at 4 kilometers from the top of it. I was quite surprised when I saw a large group still ahead. I expected more selection from the climb.

But just a few hundreds meters from me, Casagrande attacked and destroyed the leading bunch. Just Jalabert, Lanfranchi and Bartoli were able to reach him during the descent.

There was a now-famous moment when Bartoli and Jalabert spoke and the Italian is said to have told the Frenchman: “the Cup to me, the Lombardia to you.” The Tifosi were not so happy about this act because they were expecting a new historic battle between the Tuscan and Jalabert after the great one in Liege the spring before, when Bartoli was able to win against Jalabert and his team-mate Zuelle.

But nothing like that. The Lombardia 1997 was decided between the two champions some kilometers before the end. Jalabert won and Bartoli, in 4th place, collected the points to win his first World Cup. 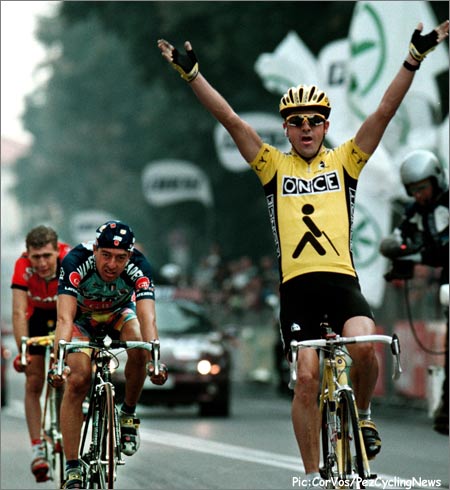 Jalabert takes the win over a disgusted Paulo Lanfranchi, and Francesco Casagrande.

What about me? I went back, after a coffee in a small bar were I watched the final. Driving while roving with my mind to the next season, dreaming about new races to chase and to remember with the help of my camera. More or less what I will feel at the end of the next Lombardia. In the end it looks like nothing has changed since that time.

—– Keep it dialed to PEZ all week for our daily previews and re-views of the Giro di Lomardia – the Pro Tour season finale coming this Saturday.

Emilia ’07: Finally Frank under the Arches!