Baby-faced Thomas Voeckler sent the huge home-crowd into raptures as he blew kisses and stretched the front of his jersey – to indicate that Bouygues Telecom is the best network – all the way up the finish straight to take the 2007 Grand Prix Ouest France, in Plouay in solo splendour after 210 kilometres around Brittany, late on Sunday afternoon.

At four kilometres to go, a Jens Voigt-driven break had just been nullified and there had been a couple of flurries, but Voeckler found the crucial ‘lull’ perfectly, launching a huge jump on the right. There was hesitation, then Valverde chased, but again the little Frenchman had winner’s luck as no one would, or perhaps could, spell the ‘Green Bullet’.

The bunch fanned from gutter to gutter, Voeckler looked-back, thought; ‘I can do this!’ and piled it on; hands on the tops, forearms and back parallel to the tar, his helmet was almost butting the handlebar extension as the adrenalin pumped and he urged that TIME towards the finish. 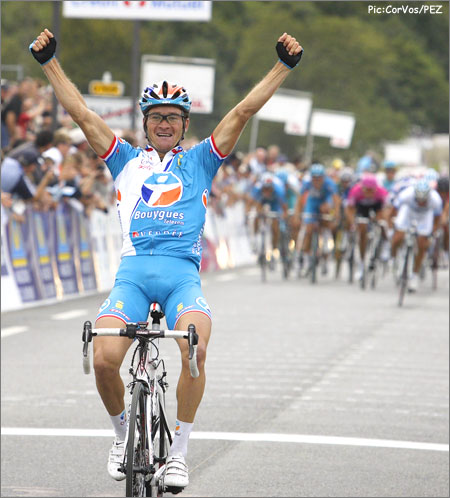 The road twists and rises to the Boulevard des Championnats du Monde, the same finishing straight where Roman Vainsteins took the world title in 2000 and Voeckler was out of the saddle, driving, battling with his bike. Behind, the chill of panic had set-in, as Liquigas, who had made the right moves all day, realised that there was going to be no repeat of the 2006 win, by the man his fans call ‘The Shark’ – the young and talented, Vincenzo Nibali.

By the time the ProTour-leader Di Luca (Liquigas) had been pipped for second by Thor Hushovd (Credit Agricole), the Frenchman was taking the best win of his career. Voeckler hasn’t rested in his laurels since that ten day spell in yellow in le Tour in 2004, last year he took four wins, but his attacking style has netted him nothing in 2007 – until today.

As is usual for pro events, the race only really came to life in the last two laps, as the Voigt-inspired break was hunted down, despite the big German urging his eight henchmen to a 48 kph penultimate, leafy 19 kilometre lap of 11. There had been ten breakaways, but Liquigas called a none-too-chuffed Manuel Quinziato (Italy) back to the bunch work for the team. Such is the life of a pro, working hard in a break one minute, then at the front, chasing your former partners the next.

Prior to Voeckler’s immaculate piece of timing, Nibali, Di Luca, Valverde, Tour stage winner, Cedric Vasseur (QuickStep) and even Olympic pursuit champion, Bradley Wiggins (Cofidis) had all tried to break the elastic, but this is Plouay and it’s not always the biggest stars who win here.

The guide books don’t put-off much time with Plouay, it is an unspectacular place to the north of more-famous Lorient with its cultural festivals and enormous U-boat pens.

But Plouay is deep in the heart of pre-history territory; the ‘rock of the fairies’, ‘the corridor of the druids’ and the forest where Arthur is said to have received Excalibur, the magical sword, are all close-by. It’s not just history that’s in the air, this is as close as you get to Flanders in France, there are prime lines everywhere and every village has its carnival and criterium.

It’s a place for individuals, Breton – the local language is still spoken by 600,000 people – and the race’s roll of honour, which dates back to 1931, reflects this individuality, it’s full of riders who were ‘different’, attacking, maybe a little crazy.

Voeckler is in that mould, an attacking, individual rider, not afraid of the big guys – he even held Lance-off, for days in 2004. This may just be the wake-up call he needs to realise that if he can win-big once, then he can do it again. 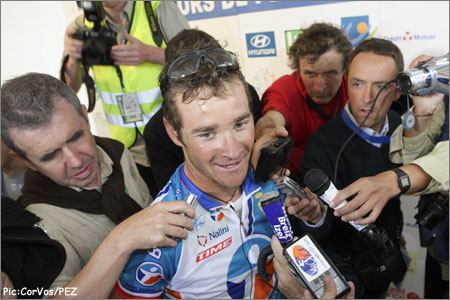 Add that man to the ‘favourites list’ for Stuttgart.