Filippo Pozatto became only the third Italian ever to win Het Volk in a thrilling finale, which only barely exceeded the thrills we had chasing the Belgian Classics opener today. From rainy start to sudsy finish, here’s how our man on the cobbles called the day…

Pozzatto’s win left “super-favourites” QuickStep with only the meager consolation of Tom Boonen’s third spot on the podium. Second was Rabobank’s Northern Classic specialist, Juan Antonio Flecha who must be even more disappointed than the QuickSteps. 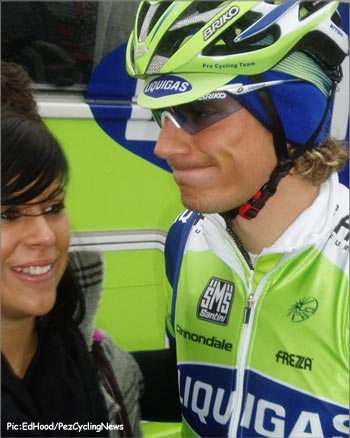 Pozzatto looked confident at the start – maybe he knew what was coming.

The Spaniard was well-clear with one kilometre to go after riding cohesively with CSC’s Aussie strong-man, Stuart O’Grady over the last 13 kilometres but the two began the cat and mouse game too early allowing a Royal chasing group of four – Pozzato, Nuyens, Boonen and Cooke to bridge-up and snaffle the win. 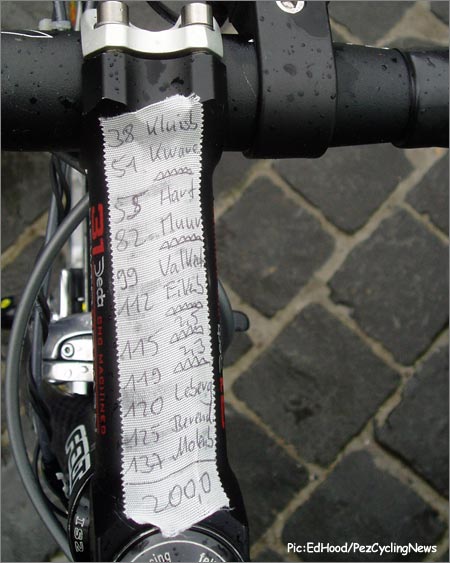 Here’s how you keep track of all those climbs.

A long-standing break of eight including Britain’s Jeremy Hunt (Unibet) was caught with 43 K to go for the race to enter a very fluid last hour where it was impossible to predict a winner right until the dieing seconds.

Pez watched the finale in former Cofidis pro, Chris Peers’ bar; but the day started much earlier. Here’s how we spent the opening day of the Belgian Classics… 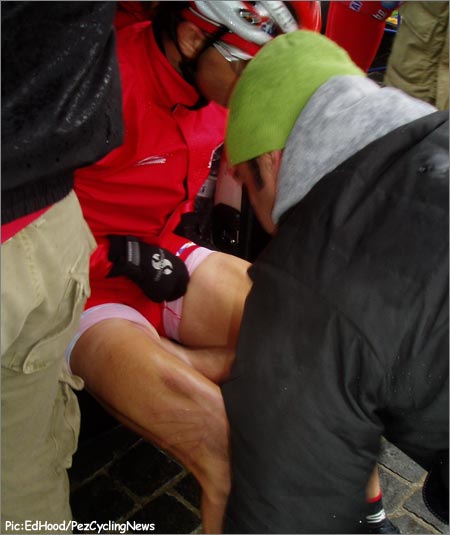 Warming oils were the order of the day, but as least the crap weather abated.

08.45: Face the day: wet and windy, walk to the station for the papers.
Het Laatste Nieuws has Nuyens, Steegmans and de Pete as three star favourites with Boonen, Gilbert, Hoste and Pozzato on two. Meanwhile Het Volk itself rates Boonen and Hoste on five stars and Pozzato, Nuyens, de Pete and Devolder on four. There are 25, eight man teams ranging from mighty QuickStep to humble Elkhaus from Austria – they’re in for a hard day’s work. 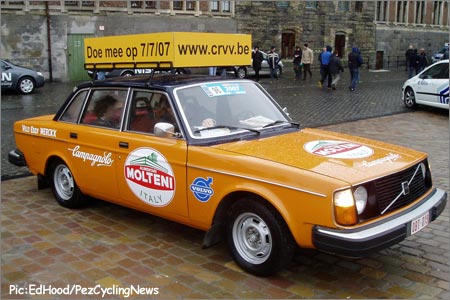 The mighty PEZ-Mobile? We wish.

10.20: Sint Pieters Plein, the signing-on/start area. Milram are first to arrive but don’t get out of the cars – it’s wet and windy; could it be de Pete’s day?

11.10: Rambo signs-on; it could be a day for him too. The wind is so strong that the rain has eased, but just for a minute.

11.30: The gun fires and the 2007 Het Volk is off and running, the girls swoon as Boonen and Pozzato pedal past, the rain even stops. 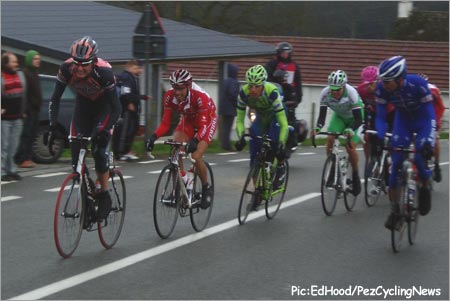 13.10: Kluisbergen, it’s dry but an icy wind is slicing across the fields on the ridge where we are waiting on the race. Here they come, it’s fast with the tail-wind and there are eight clear including GP Marseillaise winner, Jeremy Hunt (GB & Unibet) and giant Belgian, Johan Van Summeren(Lotto). It’s carnage behind, the bunch is only seconds behind but then there are three grimacing chasing groups of around two dozen each – it looks like it’s all over for them. The Agritubel squad are well represented at the back – this ain’t the French Cup ‘hommes’.

14.00: The top of the Eikenberg climb, It’s not as cold here and the sun is struggling to break through. The cobbles are wet, the only place to be up here is the front. Maybe we spoke too soon, it’s clouding-over and the temperature is dropping again. The same eight are still away with Van Summeren driving like a bear and Jez still looking good as they punch and swerve across the slippery granite sets. One minute behind there’s a group of about ten with Boonen and Rambo well to the fore. The bunch was close behind with Baden Cooke and two other Unibets blocking for Jez. The casualty rate has been high with at least half the field gone. 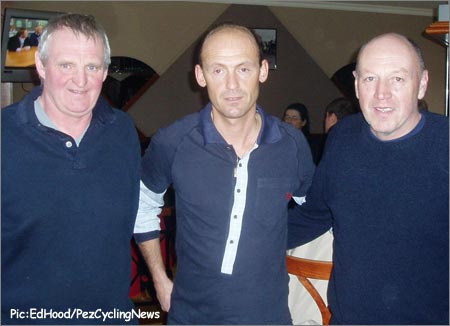 When covering any major race, especially from the pub, it’s a good idea to take along not one, but two designated drivers. That’s bar owner and ex-pro Chris Peers (c), with our man’s drivers Dave & Stuart.

15.15: Ex-Cofidis star, Chris Peers’ bar in Kruishoutem, the plasma screen is fired-up and there are 60 K to go with the break now two and-a-half minutes clear but Rabobank and Discovery are chasing. 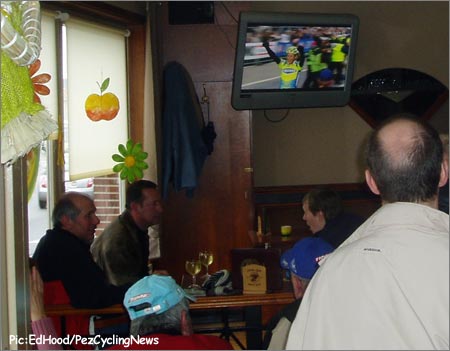 The typically Belgian reaction to a non-Belgian winner.

15.50: The break succumbs with 43 K to go and we enter the fluid last hour which ends with cycling’s new “playboy” taking the honours.

We’ll talk to you from Kuurne tomorrow – will QuickStep get their revenge?
Watch this space!