In spite of stage 1’s gc-deciding break, the racing is still steaming hot in Ireland, and we’re reaching for another towel as we ride along with Team DFL’s Evan Oliphant for today’s insider report.

Pez: Tell us about today’s parcours, Evan.
Evan: It was Tralee to Ennis today, 194 kilometres, 120 miles at 27.7 miles
per hour, it’s been a rapid race so-far; 26.9 is the average speed for the race.
The roads are really bad though, heavy and rough, there are guy’s bottles
flying out of the cages all-over the place. The weather has been good, so it’s not been too dangerous. 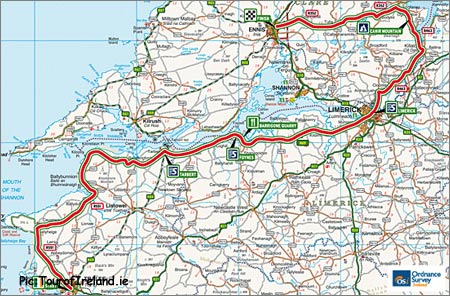 Pez: How did the stage go?
Evan: There were a lot of attacks early, we were all attacking and trying to
get up the road, but everything was brought back. Six guys got away eventually and got five-and-a-half minutes but T-Mobile and CSC brought them back at the death. Borut Bozic, the Slovenian guy from LPR won the sprint. I got 21st at the death, I was fourth wheel coming in to the finale because I knew there was a corner at 250 to go that you had to be round with the leaders, but unfortunately I was swamped just before it.

Pez: Was it a good day for DFL?
Evan: It wasn’t bad, I was first finisher for the team but Daniel is still well-placed, all of us finished in the bunch, except Sven De Weerdt (Belgium) who sat-up, it was a bit of a crazy run-in, there were road works and the road was going from narrow to wide to narrow. 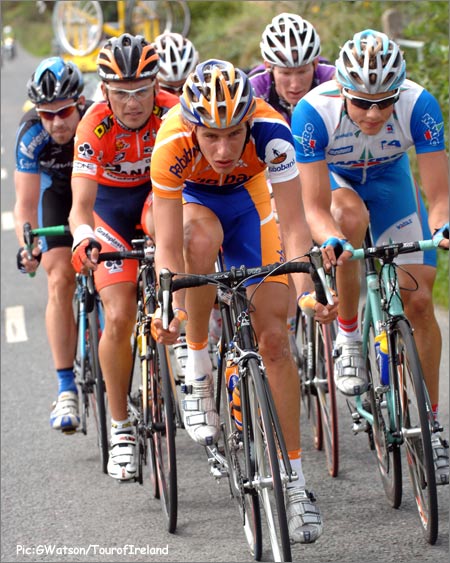 Pez: Who’s impressing you?
Evan: CSC are very impressive, they’ve impressed me all year. In this race, they don’t look like they are trying, if they want a move brought-back then they just do it, but when the come back the string to go to the car for bottles they are laughing and joking. Maybe it’s hurting them, but they make it look like it isn’t. This morning was full-on for 50 k then the break went, Unibet kept it steady, then CSC took over and brought it back easily, T-Mobile gave them a hand.

Pez: Will Vandenbergh hold-on to win?
Evan: I don’t know, Unibet must be tired and there are 235 kilometres tomorrow with some big climbs, Vandenbergh must be a bear because he’s big but he got-over those big climbs the other day.

Pez: Do you think the fact that Discovery, Unibet and possibly Astana won’t be around next season is making guys ride harder, looking for contracts?
Evan: Navigators too – they’re out for next year. I think that in the case of the Unibet team it’s certainly true, they have been working very hard and are obviously out to impress. 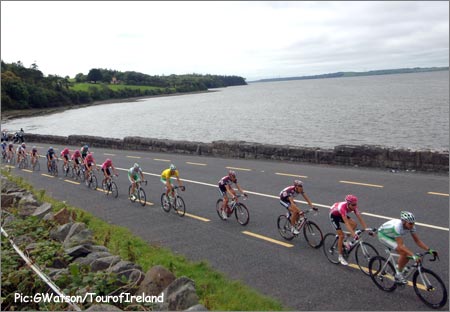 Good weather and great scenery on the Emerald Isle are making this a pretty good event.

Pez: How about the Irish?
Evan: It’s not happening for them, David O’Loughlan has been attacking a
lot, but he’s not getting away.

Pez: How about tomorrow?
Evan: We have good morale, and we’re all keen to get up the road. I thought it was an easy day today, despite the speed my legs are a lot better today than they were at the start, the only thing today was that the stage seemed to go on forever. Daniel is only 20 seconds from the top ten, so we’re hoping to get him up there. I think anything can happen tomorrow, it’s a long way and like I said, Unibet must be tired.

Stage 3 Race Report – By Tour of Ireland
Borut Bozic (Team LPR) won the spectacular bunch sprint into the finish town of Ennis to win stage three of the Tour of Ireland on Friday 24th August after 194km of racing. Bozic triumphed over the entire peloton who arrived at the outskirts of the County Clare town intent on taking the stage win in the 2.1 UCI ranked tour. The Slovenian put the hammer down in the final 200m to secure the honours on the day. Baden Cooke led the mass charge down Station Road but the plucky Australian had gone too early and was passed by Bozic, Bernhard Eisel (T-Mobile) and Maximiliano Richeze (Team LPR).

The sextet worked very smoothly together with Boasson Hagen taking the other intermediate sprints at Foynes and Limerick to give him enough points to for outright lead and the An Post green jersey and was set to take it into Saturday’s stage if the group stayed clear.

The lead grew to five minutes as the bunch behind seemed content to let the break go with no one in the leading group threatening the overall lead in the general classification of the race sponsored by Fбilte Ireland. McCarty went over the summit on the Cahir Mountain first to take maximum king of the mountains points.

As the race approached 40km to it was the CSC team who took to the front to take up the chase. T-Mobile joined in the chase as the gap closed to two minutes and there was a possibility of a stage victory for their top sprinter Eisel. T-Mobile‚s support at the front helped dramatically reduce the deficit to the leaders and the Italian team of LPR further boosted the cavalry charge and the gap dropped to 80 seconds with 20km to go. Overall race leader Stijn Vandenbergh was safely tucked in behind his Unibet.com team mates but close enough to the front to react to any attacks on his twenty second lead.

The front runners showed no signs of surrender even though the blackboard showed the lead reduced to 50 seconds with 15km to go. Gordon McCauley (Plowman Craven € Evans Cycles) joined the front runners as they absorbed the break back into the main field to set up the spectacular gallop in front of the Old Ground Hotel in the centre of Ennis town.

Race leader Stijn Vandenbergh (Unibet.com) finished in safely in the main field to retain the yellow jersey and is optimistic on his chances for overall victory. “Tomorrow is going to be a long day,” said Vandenbergh: “But I hope it be like today with a group going away that will not be a challenge for the overall lead and if it finishes in a group we have Baden Cooke for the sprint. Today it was good that CSC road for Breschel (Matti) and T-Mobile for Eisel (Bernhard). We don‚t need to go on the attack tomorrow. We can follow the guys high up in the classification.”