Whilst 20 year-old Norwegian sensation, Edvald Boasson Hagen was scoring another win for his Maxbo-Bianchi team, our boy was riding further in one day than he had ever done in his life before. It’s the little things, right? Read on…

Evan: It was 232.5 kilometres out from Galway and back, if you count the neutralised zone, that more than 150 miles, I’ve never been on a bike for that distance in my life before. We were in the saddle for more than six hours and it was drizzly all day. There were five KOM climbs, but only two needed the inside ring. 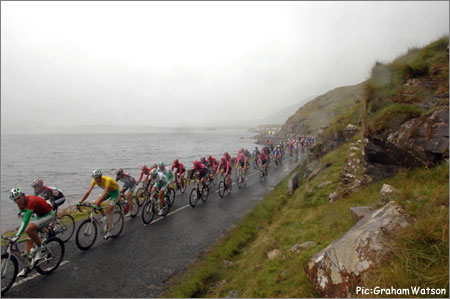 Rain was on the menu today.

PEZ: How did it pan-out?

Evan: Five guys got-away early and were around three minutes up after the first KOM, on the decent two CSC guys crashed and we rode easy to let them get back; although I think one of them didn’t. With us easing-up the break went to six minutes. Unibet took it up and just rode and rode, it was a cross-wind, so it was hard work for them and very hard just sitting in the bunch. 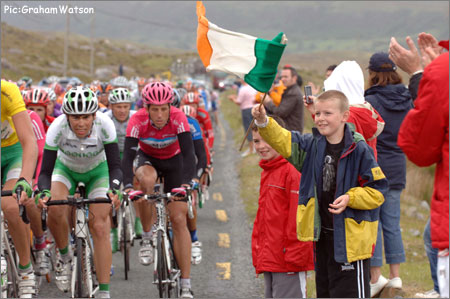 The last 50 kilometres, things went crazy, T-Mobile were riding for Eisel and it split under their pressure. Despite that, it was late when they brought it together and the Maxbo-Bianchi guy (Boasson Hagen) won the sprint. 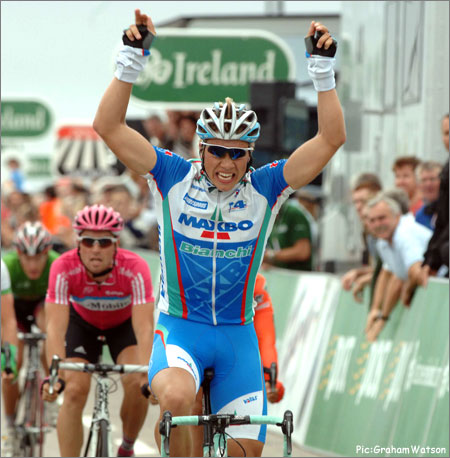 PEZ: Did DFL have a good day?

Evan: Gert Vanderaerden quit today, but Dan Lloyd was going very well, he was attacking the group on the run-in trying to get into the top-ten on GC. But I don’t think that’s ‘on’ now, tomorrow will be a parade, it’s shorter and flatter – that’s what I’m hoping, anyway! If it was going to happen, it would have to have been today. I was in the second group and the Navigators guy who was sixth, Ben Day, I think, punctured and came back from the lead group to us. Some of his team mates dropped-back for him; we were sitting at 60 kph steady and not making any impression. Dan said that it was super-fast at the front. 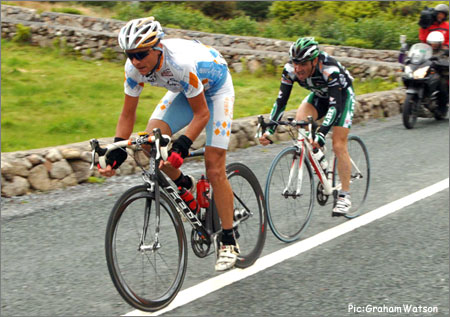 Danny Pate had a banner day in the break for Slipstream.

PEZ: Do you still think Vandenbergh will win?

Evan: Yes, like I said, I don’t see it changing tomorrow, he’s so-strong – he punctured twice today and got-back without dram,a and his team are holding-up.

PEZ: It wasn’t a good day for CSC though?

Evan: No, they had guys in another crash, as well as the one I mentioned. One of them was a Schleck brother, our guy Sven De Weerdt was off the back at the time and Schleck gave him a shout as he passed. Sven said it was great, just like being behind a motorbike for 20 k! 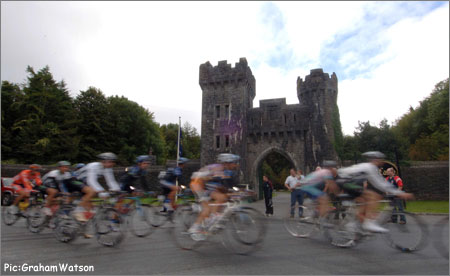 PEZ: How’s the Litespeed performing on that rough Irish tar?

Evan: It’s very comfortable, it soaks-up the road-shock much better than carbon, aluminium would be very uncomfortable on these roads. I plumped for 25 mm tubs too, Schwalbes, and they give a very comfortable ride with the titanium frame.

Stay-tuned to PEZ for all the blarney.