After four tough days of racing, the inaugural Tour of Ireland came to a quality end with a bit of an unusual finish, but nevertheless, the first edition has to be called a resounding success. Ed Hood talks with our man in the trenches, Evan Oliphant, for one last update before he heads back home to Scotland.

Evan: We had a two hour drive to get to the start, so that was a bit of a pain. The stage itself was 147 k, Athlone to Dublin, pretty-flat, with a tail wind, we did it in around three hours, so it was quick. The sun was out and it was 20 degrees, so that was good. 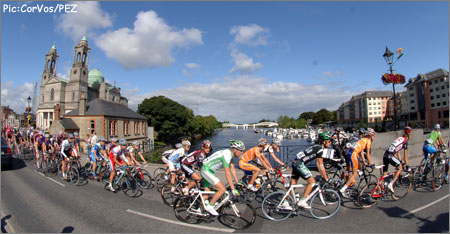 PEZ: How did the day go?

Evan: I was away with Hamish (DFL team mate Hamish Haynes, 2006 British champ) in the first break of the day, but we were caught. I got away again after 10 or 12 k with half-a-dozen or so guys, we got to a max of 1-25, then they started to bring us back. When it came down to 25 seconds, the guys in the break all started attacking each other, I was last to get caught. It was frustrating because the move that countered off us getting caught, was the move of the day! 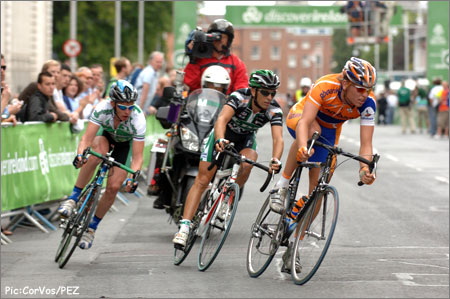 There was David O’Loughlin (Navigators & Ireland) , Marco Mercato (LPR & Italy) and Thomas Berkhout (Rabobank Continental & Holland). Those three stayed-away to the death, but it was a bit of a mess at the end. There was a two kilometre finishing circuit to be covered ten times, but as the bunch came on to it, the lead car told the bunch to keep together, the three guys in the break were a lap of the circuit ahead of us and the officials wanted them to sprint it out, and didn’t want the bunch to get mixed-up with them. We just rode at a steady tempo behind the car, it was meant to be ten laps, but I think we only did seven or eight. 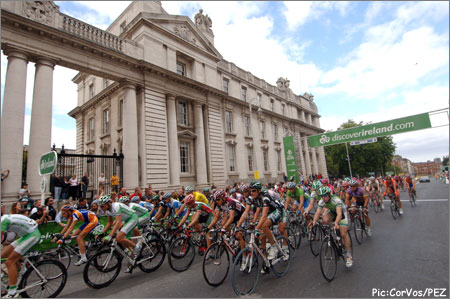 The lead car finally pulled-over at 150 or 200 to go, to allow the sprint for fourth. Mercato won from Berkhout and O’Loughlin. I was about 20th, it would have been better if we had ridden another lap after the leaders had finished, so as the sprint could wind-up properly. Stijn Vandenberg (Unibet & Belgium) won overall, but that was always on the cards. 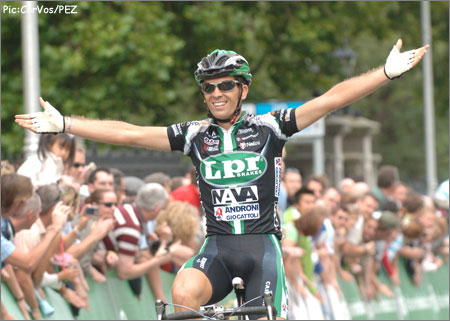 PEZ: Was it a good day for DFL?

Evan: Average, I was best finisher, Daniel punctured on the run-in, but managed to get-back, there were a lot of guys punctured approaching the circuits. He didn’t move-up to top ten, but he’ll be in the prizes at top twenty. 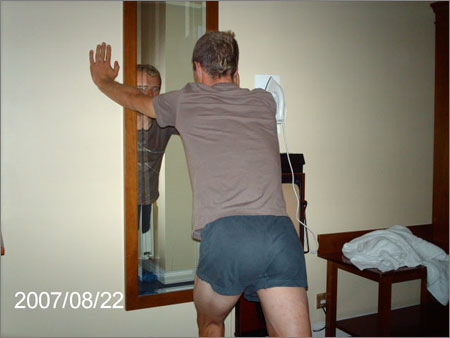 Evan got his stretch on every evening during the Tour. Those sore muscles don’t loosen themselves up.

PEZ: What was your take on the race, as a whole.

Evan: Probably the best-organised race I’ve ridden. The hotels were good, the crowds were great and apparently, the Irish Tourist Board is so-chuffed with the way it has gone, they want to continue the sponsorship for another five years. 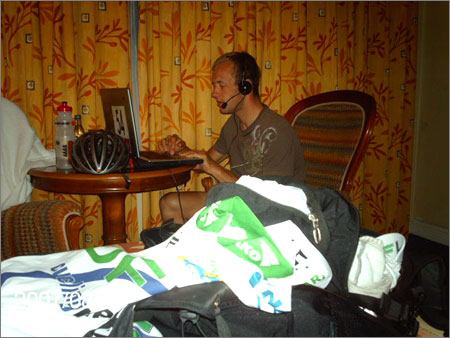 You didn’t think he slept the whole time when not racing did you?

Evan: I fly home to Scotland at 06.30 tomorrow and I’ll be having a few days easy to recover from this. Then’ it’ll be some long, hard runs and taper into the Tour of Britain, which is only ten days away.

PEZ: Thanks for all your time Evan and any final ‘gems’ for me?

Evan: Now I know why the CSC guys are so good – they have a game of football before the stage!