Pozzato, he’s a good rider, a Tour Stage, Milan – San Remo, Haut Var and now Het Volk. But a man who spends that amount of time on his coiffure isn’t who we want to see winning in Flanders. We wanted Tom or Rambo or de Pete to send our bar into raptures; maybe today will be different.

Kuurne has a parcours of a similar nature to Het Volk with cobbles and ‘bergs’ aplenty. It’s a tad shorter at 193 K and hasn’t got quite as illustrious a role of honour as Het Volk (the mega-stars have usually fired all the biggest artillery the day before) but it’s a very prestigous event and one any pro is proud to have on their palmares.

We were up at the start at Kuurne early to catch the vibe. We got the predictions horribly wrong yesterday, but today QuickStep must win (please). 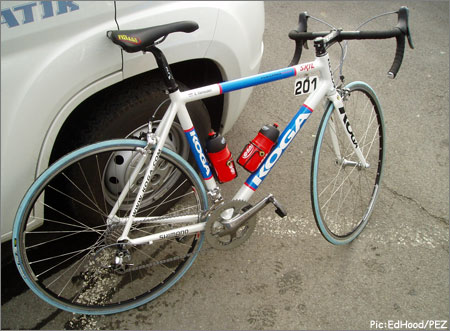 There are pro-continental teams here today, mixing it with the ProTour guys; some of the squads, like Skil look very good with identical bikes and groupsets whilst Landbouwkrediet still have two-year-old Colnagos as spares and a mix of equipment – this is the “real” world of tight purse strings. 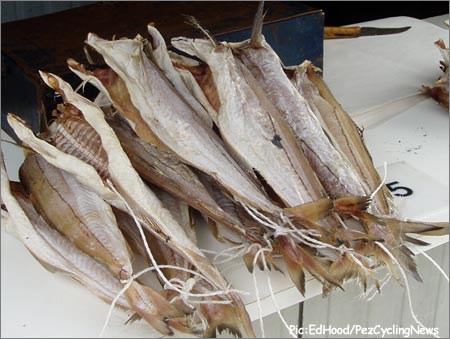 At the start there’s beer, frites, burgers and – dried fish; you chew it ’til it’s mush then gob it out – yummy! Security isn’t tight and it’s easy to mingle with the stars. There’s Jez Hunt, hero of yesterday’s big break; “good ride yesterday, Jez.” In the pro world only results count though; “yeah, but we got caught!” replies Jez. 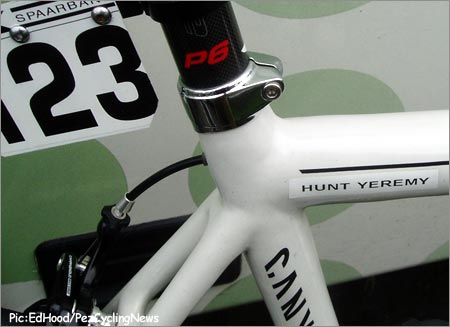 Looks like the UniBet graphics guy prefers the eastern-European spelling.

As the start approaches, it gets progressively more chaotic with the riders who can’t get through to the official start mixed-in with the crowd. Leif Hoste munches a chocolate biscuit beside us as Julian Dean explains the niceties of his Look to Jez. 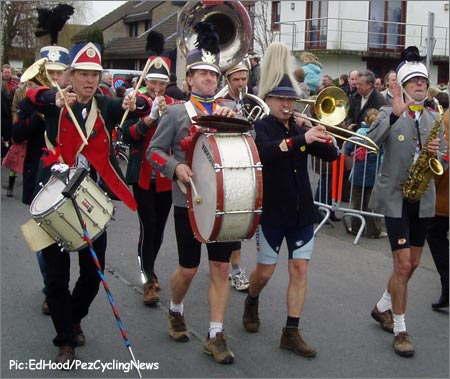 With a deranged brass band providing the backing-track the 2007 Kuurne – Brussels – Kuurne rolls-out. 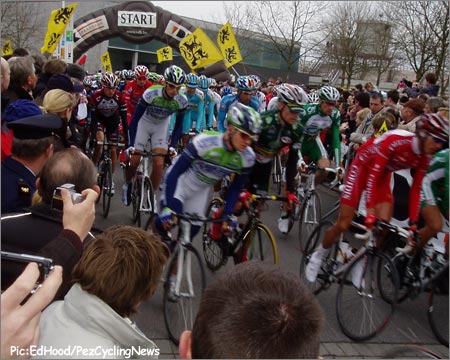 The traffic chaos at big Belgian races has to be seen to be believed, so we head straight to the top of the Kwaremont. 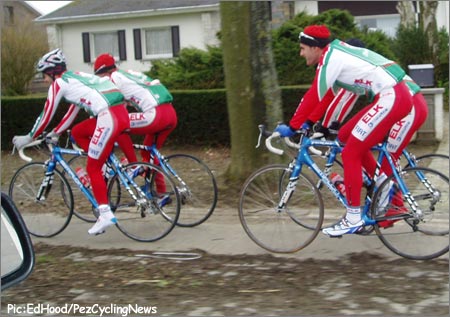 En route we passed the Austrian, Elk House riders out for an easy pedal, counting their lucky stars that they don’t have another 200 K of pain today. 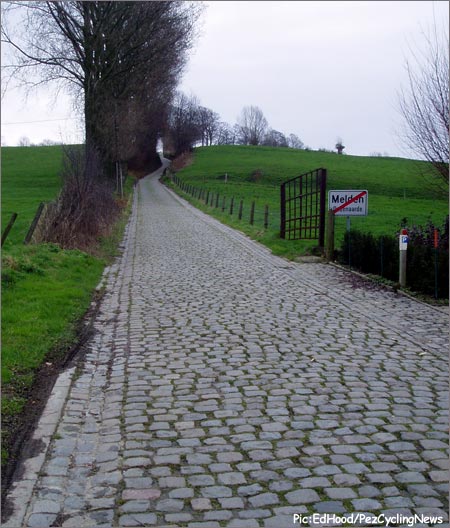 We decided to have a look at the Koppenberg – it’s steep! 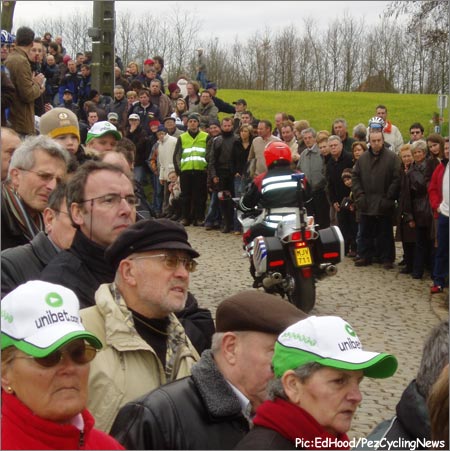 The top of the Kwaremont and the clans are gathering. At the top it’s essentially a cobble-surfaced trench, the field level is around two metres above the road level and the crowd gathers on the bankings. 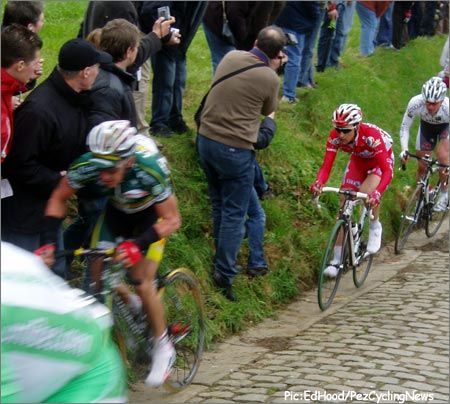 The weather is nice, mild and the wind isn’t too strong – there’s the choppers: Three are clear over the top with five or six chasing, Stuey’s in there and looking good. Boonen’s prominent at the front of the bunch – there’s some real pain on display. 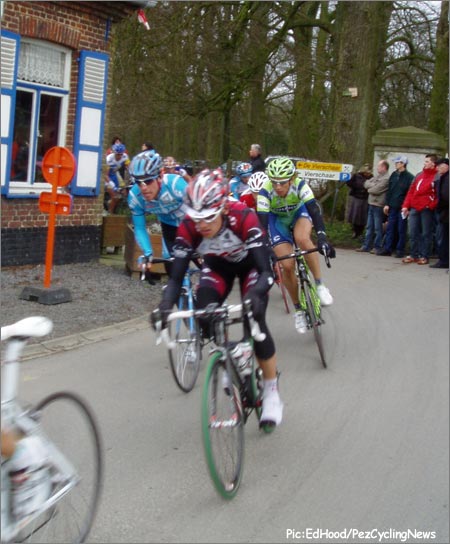 Then it’s time to dash-over to the top of the Cote du Trieu – “Phil’s Hill” as good old Dave Duffield would have it. It’s still the same composition over the top and time for us to head to our favourite bar for the finale.

Disaster!
Bar Sporting in Avelgem has new owners and one of our traditions dies, we just hope that the ancient owner and his hound are OK. A frantic search gets us an alternate bar- Sfeercafe Atea. Hurried negotiations with the owner, Peggy regarding getting the TV switched-on are concluded just as Nico Eeckhout is being interviewed as he pedals-along off the back having been DQ-ed for taking a tow: no win for Rambo then.

The two groups that were away over the Cote du Trieu have merged and eventually two riders slip the group, Matte Pronk (Unibet & Holland and Preben Van Hecke (Predictor/Lotto & Belgium). Stuey is wasted and he and the rest get absorbed.

On to the finishing circuit and CA, AG2R and Skil are chasing. With one lap to go QuickStep do what we’ve been waiting for all weekend and give us a display of text-book bike racing as Van Petegem and Van Impe show their teeth. 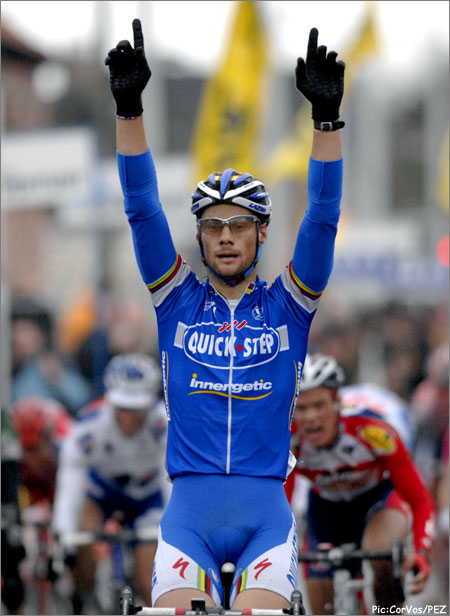 But, they don’t use power-house Steegmans to chase, he has another job to do. Two kilometres to go and the two escapees succumb. Van Impe is finished – job done as he sits up and de Pete keeps it in a long line, aided by Skil (it’s favours time). Hoste tries a late jump to salvage the weekend for Predictor but he’s going nowhere as Steegmans starts his work for the day. 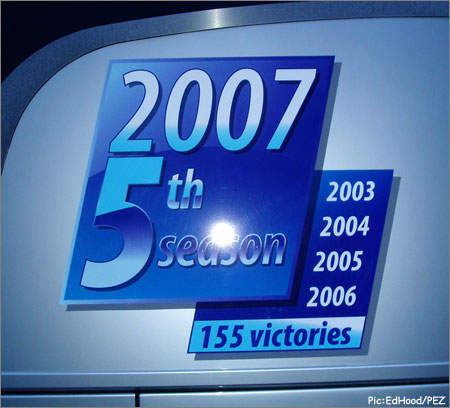 The QuickStep sticker says it all.

Big Gert lays-down the power and Tom is tucked-in tight. As Gert swings-over his arms go-up; nobody is coming-past Tom. Deep joy as Tom salvages our weekend – and QuickStep’s. 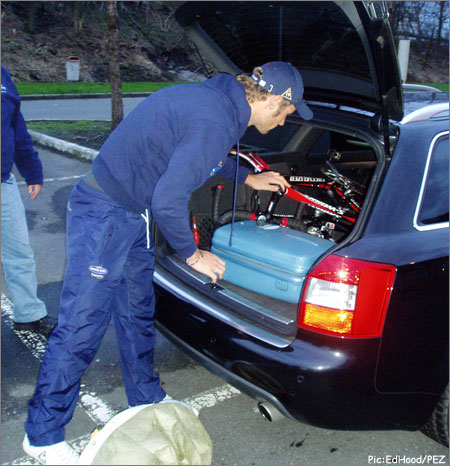 Wow, even Tom Boonen packs his own bike…it’s incredible. 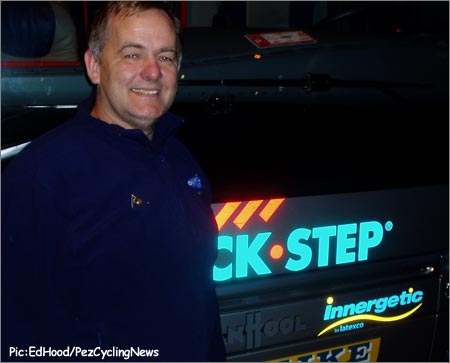 On the way back we pop-in to The Holiday Inn, fellow Scotsman, James Alexander, who drives the QuickStep bus invites us aboard for a coffee, but not before Tom pops-by to pick-up his bikes and pop them in the Audi. I snap-away furiously at Tom before stepping-into the hallowed autobus to enjoy my coffee, what a way to end the weekend.