The blue touch paper has been lit, and it’s time to admire the fireworks! Another firecracker edition of Liege-Bastogne-Liege is going to the wire – a group of favourites are hammering into the final kilometre pursuing Di Luca and Schleck. Only seconds in it, and the winner could be anyone of a dozen ‘capos’.

And the news is in – Liquigas’s very own assassin, Danilo Di Luca, has seen off his rivals with a brilliantly timed finish to snatch not only his first LBL title, but, incredibly, his first podium slot at a race he was born for. 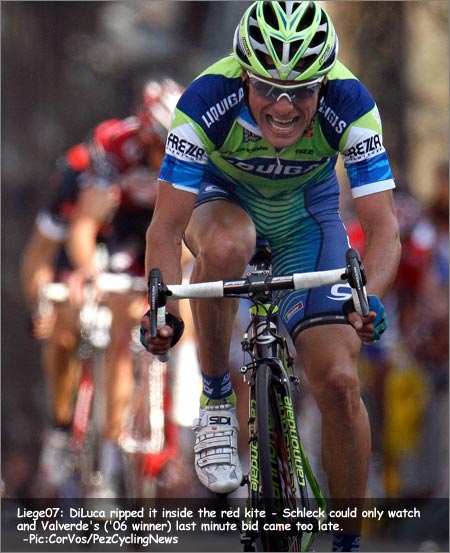 ‘The Killer’ jumped clear with Frank Schleck just four kilometres from home and their two-man pursuit looked like holding the field at bay until Alejandro Valverde’s late charge brought the field up to the tiring Schleck – just as Di Luca applied his finishing burst to edge clear.

Defending champ Valverde went down swinging punches for second, and Schleck hung on for third – a staggering ride considering he has fractured vertebrae!

The final 30 kms were as good as any we’ll see this year with a top-class field trying to blow each other up. Approaching the Cote de Sprimont at 28kms to go, the remaining half of the day-long early break (Remy Di Gregorio (FDJ) and Euskaltel’s Unai Extebarria) are caught by Amstel winner Schumacher (Gerolsteiner), CSC’s Karsten Kroon, QuickStep duo Barredo and Vasseur – taking the heat off Bettini – and Liquigas dangerman Vincenzo Nibali.

Schumacher gets itchy feet and ditches Vasseur. The German is turning on the speed and his gap is growing, stretching … out towards 20 seconds. It’s nearly a time-trial ride as he barrels towards the Cote de Saint Nicolas.

T-Mobile have seen the danger and hit the front, with QuickStep also worried. The chase has the desired effect, as Liquigas haul Schumacher back. 6ks to go, and Ag2r climbing sensation John Gadret goes for it.

He doesn’t get far with Boogerd on his case. Then a huge jump – Bettini looking for an L-B-L hat-trick launches! It’s a big dig, but ‘The Cricket’ just doesn’t have the legs to make his move stick. He’s pulled back and everyone at the top of the betting sheet is there.

Frank Schleck! Guessing that the others are calculating on the race being decided on the final drag up through Ans, The Luxemburger – broken bones and all – goes for it. Di Luca is the only one to get his wheel, and suddenly they’re clear!

Thomas Dekker tries to follow, but the gap teases out – 5 seconds, then 8 seconds, then 10. Schleck is doing more work; Di Luca slides through but his turns are less pronounced on the front.

Under the red kite, Schleck’s legs look smooth, but his face doesn’t lie – this hurts, and Di Luca doesn’t look like he’s enjoying things either. Behind them, Dekker is swamped, as Valverde turns the heat up in the chase. The favourites are closing, closing fast! Di Luca knows the time has come.

He goes for it just on 500 metres to go. Valverde gets to Schleck, but he can’t catch the Italian – Di Luca finally wins ‘La Doyenne’. It’s going to be a sweet victory, as it’s been a long time coming.

A special mention to Vasil Kiryenka (Tinkoff) and Jan Kuykx (Landbouwkrediet) – they were out with Di Gregorio and Extebarria in the early break with a lead that topped out at 18 minutes 30 seconds. 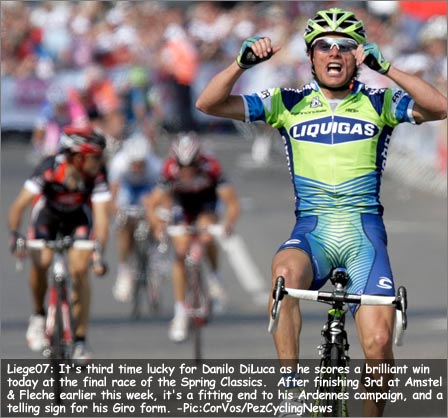