Siena, Tuscany 06.45 Monday, sitting among the business men, bantering and drinking espresso before they head for their desks. As a wise man once said; “even if you win in the rat-race, you’re still a rat!” My thoughts aren’t of deals or euros, my head is still far north of here, in Lombardy.

After the race on Saturday afternoon, I had to get back to Como, to get my pictures away. The words had winged-off the top of the Ghisallo from my BlackBerry, soon after Cunego had reminded us of his class and Ricco had confirmed his; “coming-man” label.

A thing you soon learn in Lombardy is that distances on maps and average speed calculations you use in other European countries, mean nothing. The main autostrada to Milano apart, the roads are either incredibly scenic, twisting and slow or incredibly urban, clogged and even slower. Traffic light sales and service companies must flourish here. The ‘short’ drive to Como from the Ghisallo took an age. 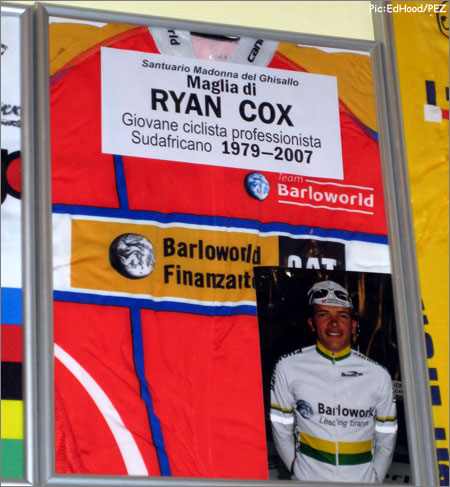 The memory of Ryan Cox has taken up a permanent residence in the Ghisallo Chapel after his tragic death earlier this year.

Next to traffic hassle, the other thing you become aware of in Lombardy is that information technology is well-behind the UK. In Edinburgh, virtually every “style” bar offers free wi-fi, every one of the numerous Starbucks has wi-fi, and getting connected is no-drama. Como is different, there was a hard-wired internet connection in the hotel room, but it was incredibly slow. There was lobby wi-fi, but the signal kept dying; my pictures finally had to be consigned to a memory stick and sent from an internet cafe – “The Black Panther”, where talk is frowned upon as the nerds work hard at losing their eyesight. All of this journalistic crisis, coupled with the fact that we had to leave Como on Sunday morning immediately after breakfast, to deliver Marlene to her beloved Tuscany, meant that there was no time for the quiet post-race drink where you discuss the day’s events and clear the mind.

Our Lombardy weekend started on Wednesday when we flew-in to Milan from Edinburgh, picked-up a hire car, plucked-up our courage and took to the autostrada. All you can say about Italian drivers, is that they make the French seem safe. Smiling little old ladies become soft-permed Mad Maxines when you put them behind the wheel of a filthy, rust-stained Fiat or Lancia. Maybe it’s the fact that news of the Ferrari Formula One team constantly assaults the senses; the newspapers and TV overflow with it. 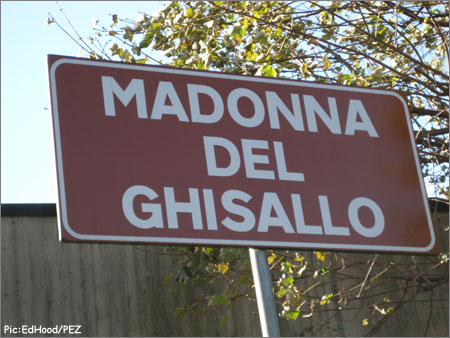 There were detours and stop a’plenty, but this was the ultimate destination.

The City Hotel in Varese gave us friendly shelter at the end of the ordeal and the local restaurants were great, cheap, cheerful and with fine food and wine.

Thursday was ‘drive the course’ day. It would be easy to say; “what’s all the fuss about?” for the first hour-or-so of the parcours. The Varese/Como area is heavily industialised; Lombardy punches well-above its weight in terms of contribution to the Italian economy and there’s a political party – The Northern League – which has campaigned for years for the northern province to cut ties with its poorer southern relatives. 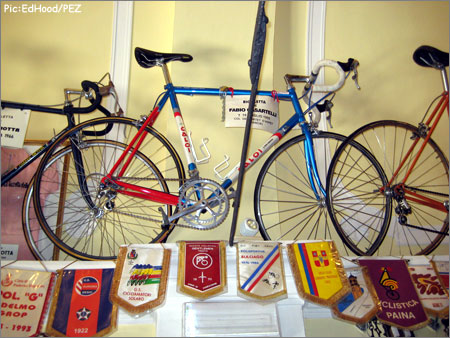 Industry needs factories and high-density housing; there are plenty on the early race route. It’s not until you slip Como and pick-up the little lakeside road that the sheer beauty of the area grabs you. Lago di Como is shaped like a three-pointed star and the race skirts each part of the star in-turn, as well as taking-in the legendary climbs. 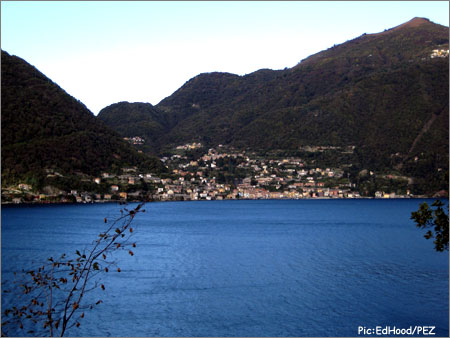 Lake Lugano also gets a brief visit, after the first climb of the day, the Intelvi. In 1965, when Tom Simpson won Lombardy, he had dragged an elite group clear on the Intelvi; as a boy I used to gaze at pictures of him, forcing the pace on this climb, rainbow jersey whiter than white, not a hair out of place, cool? He was ice cold!

The descent off the Intevi is lethal, we nearly met our end as a 40 ton truck passed another similar monster on the inside of a hairpin, as the driver chatted happily on his cell phone. If you can stop for a moment though, the views to Switzerland use up the superlatives; the bluest of blue water with mountains rising straight out its surface, cloudless skies – it is hard to find words. 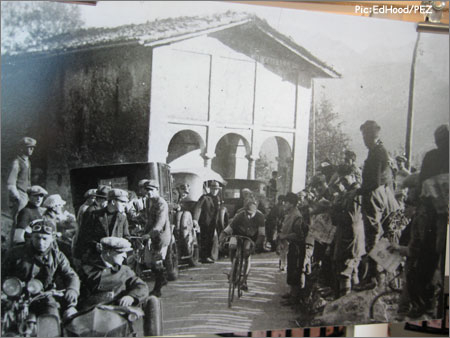 101 editions of the Race of the Falling leaves make for many, many pictures…plenty of which are to be found in the new museum on the Ghisallo.

After the brief flirtation with Lugano, it’s back through the passes to Lake Como and an excursion all the way round its northern star point. The hills start again in earnest after this leg, culminating with the trilogy of Ghisallo, Civiglio and Battaglia, all in the last 44 kilometres. 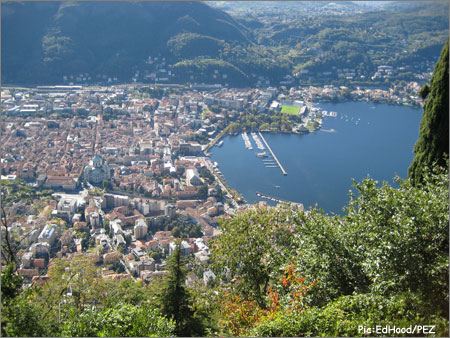 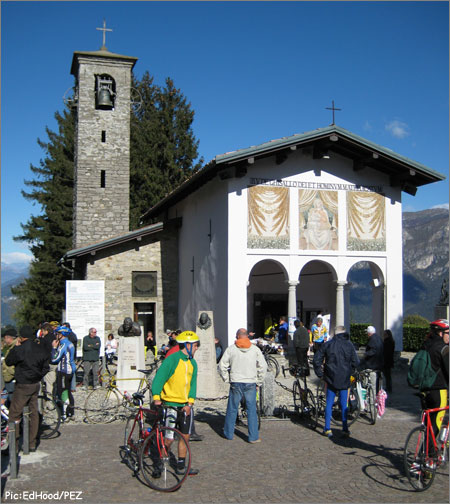 And the Chapel, so very, very close.

It’s similar to Milan-San Remo; in the Primavera it will all happen between the Poggio and the finish. In Lombardy, the decisive phase is from the Ghisallo to Como. But to participate in the finales, you have to survive all that goes before. I was unprepared for the Ghisallo, a long, long tough climb with the legendary, unique and tiny cyclists’ chapel at its summit and where the views leave you in awe. There’s a sleek museum there too now, heavily weighted towards Italian cycle sport, but no less fascinating because of that. The Civiglio and Battaglia are smaller, but come quickly and make for a frenzied finale, there’s no forgiveness for mistakes on these roads. 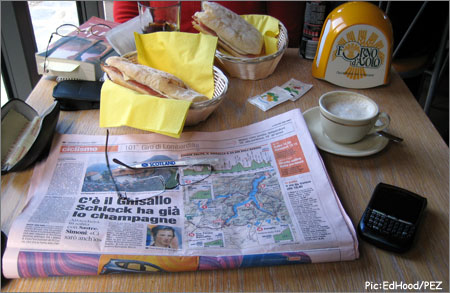 You didn’t think he starved himself did you?

On Friday, we enjoyed Como’s beautiful lakeside and in the evening took the funicular railway to Brunate, high above the city, where Ale picked us up and we enjoyed dinner in a restaurant which specialises in pollenta – a type of savoury maize-flour paste. My grappa nightcap was downed in the little bar at the funicular station; I was as excited as a kid about seeing the Tour of Lombardy for the first time, the next day. 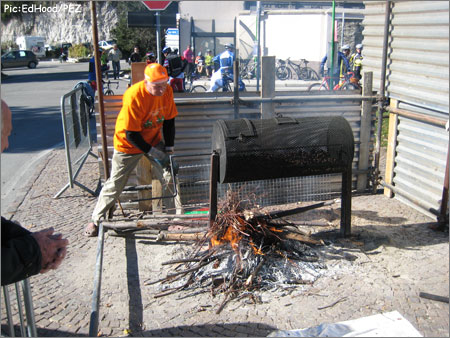 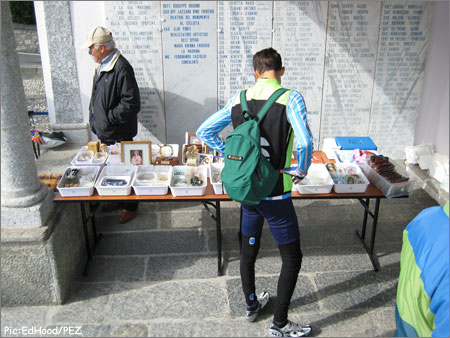 If not chestnuts, perhaps a souvenir from the chapel?

The Ghisallo was special on race day, the chapel, the hundreds of club cyclists who have pedalled-out to watch, the views, the roasting chestnuts, the building excitement – one of my best experiences of our sport. The race is like a Norse saga unfolding before you, the early chapter is ending as the breakaway of supporting characters falls apart, but the climax to the story is being prepared as the Gods move-up. 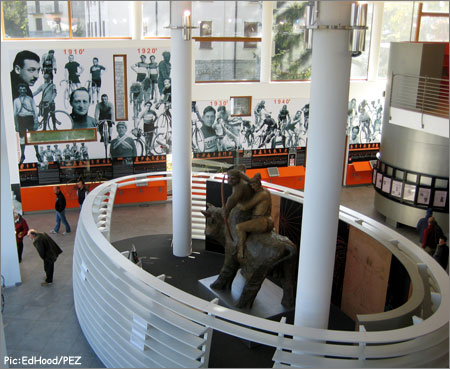 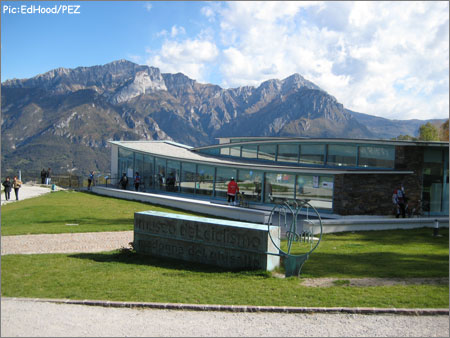 The new museum’s views are unparalleled…except maybe by the Chapel a few scant meters away. 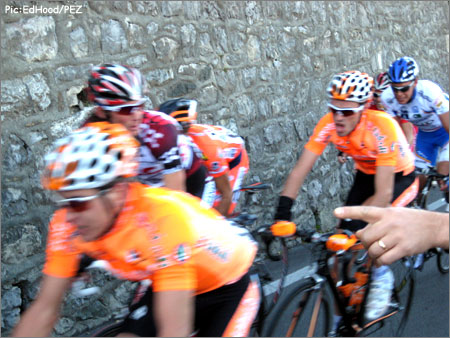 Strong, straight in the saddle, faces showing little emotion – except Sam Sanchez, he was making no secret of the pain. In a race like this, surprises are few, a rider must have been demonstrating good form prior to the race, just to be with the leaders. This year was no exception – Schleck, Sanchez, Kolobnev, Cunego, Gusov and, in a parallel with the Primavera – Riccardo Ricco.

On the Poggio in March, he prised himself clear with Gilbert, only to succumb on the descent. On the Civiglio, it was Cunego he took with him, but there was no surrender this time, just honourable defeat at the hands of an inspired ‘Little Prince.’ 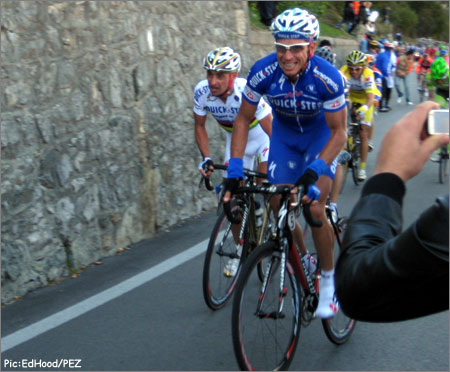 It just wasn’t in the cards for Bettini this weekend.

Bettini’s collapse on the Ghisallo was no surprise if you were at Stuttgart for the Worlds. On the Friday before the race, his eyes burned like Superman’s when he’s melting rock; on the podium on Sunday, it was all gone, he was used-up. 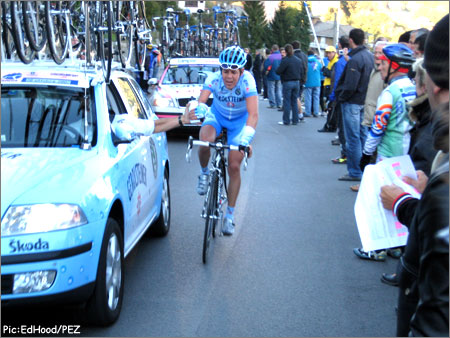 Maybe he should have just gotten a little tow up the last part.

I didn’t have time to watch all the stragglers, I had to sprint back to the cafй to secure our seats in front of the TV, before the masses arrived. The TV feed was late in coming through, the patrons grumbling at the owner, I didn’t think he was a director of Italian TV, but what do I know? 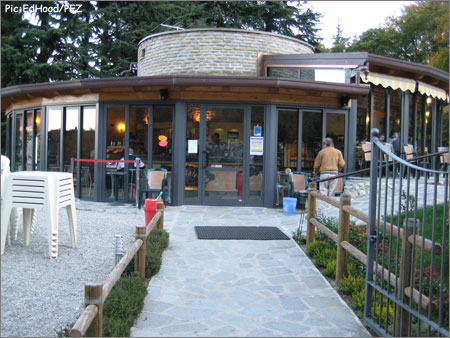 PEZ World Headquarters moved to the top of the Ghisallo on Saturday. 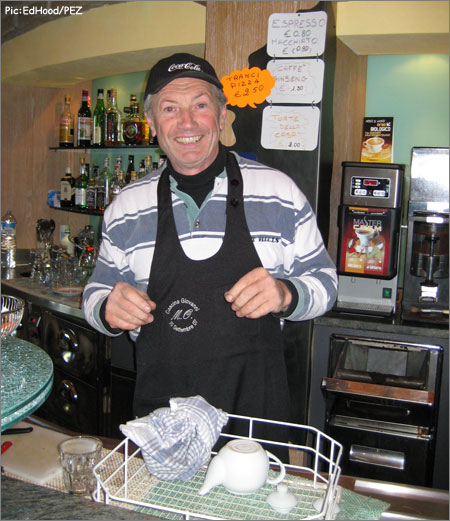 The finale was great, befitting of a ‘Monument’, there’s nothing better than being among Italian fans, when their boys are producing the goods. However, the minute the race is over, the huge throng has gone. We were with left with the summit of the Ghisallo to ourselves. The wind was cold as we took our last views from the top, and one final walk to the chapel, quiet at last as we took time to think of Ryan, Fabio and Tom. 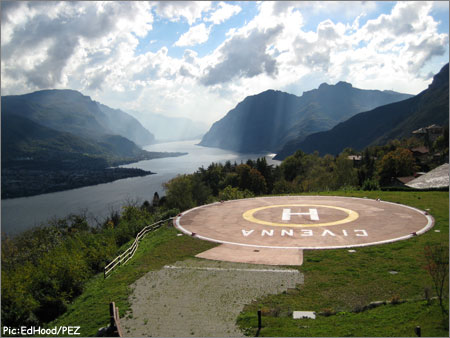 Could it be any more beautiful? Sure, I’ll come back next year.