Damiano ‘Kid’ Cunego walked – and rode – like a man today in Como, handily outsprinting Saunier-Duval’s Ricardo Ricco to take top spot in the season-closing Race of the Falling Leaves. But with all the favorites together in the final kms, it was a true nail-biter and the zesty peppering of attacks made this one ‘molto caldo’…

“The Little Prince” (real champions are never limited to just one nickname), Damiano Cunego (Lampre) straightened his crown and ended a shaky period in his reign with a magnificent win in the Tour of Lombardy, out-sprinting fellow young Italian, Ricardo Ricco in a sun-drenched but blowy Como on Saturday afternoon to take his second Classic of the Falling Leaves. Paolo Bettini’s dream of a hat trick ended on the Ghisallo – PEZ was on the case from the start: 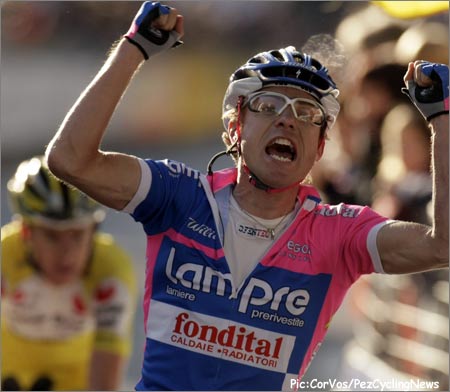 • 10.40: “179 corridori di 24 team”, with Bettini of QuickStep number one and Aggiano of Tinkoff number 238, roll-out of Varese, there are 244 kilometres and six tough climbs – Intelvi, Bellano, Balisio, Ghisallo, Civiglio and Battaglia – between here and the lakeside finish in Como. The first part of the route is urban; past endless shops, apartments, car showrooms and retail parks. 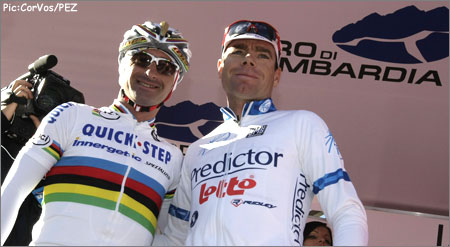 Two white jerseys were in attendance today: Paolo Bettini in his freshly minted World Champion frock and the even fresher minted Cadel Evans in his ProTour leader’s jersey.

• 11.50: Argegno, lakeside on stunning Como, it’s the start of the Intelvi climb and our Italian connection Ale Federico tells me it’s “compatto” as they approach the base of the climb. (His report is coming later.) He’s debating whether to take the lakeside road or the ferry to head them off. I’m debating whether to have a grappa. We’re at the summit of the Madonna del Ghisallo climb, the trees are almost as beautiful as they are back in the Trossachs in Scotland, there’s not a cloud in the sky, there’s a chilly breeze, but apart from that it’s a perfect day in Lombardy. Ale will keep us abreast of events on the road as we await the TV feed and the live action. No press rooms for PEZ – we’re roadside with the tifosi. 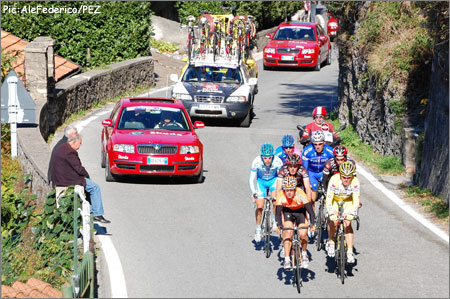 • 12.45: Menaggio, where the race comes back down to Lake Como after having ‘kissed’ Lake Lugano briefly; Ale tells us that there are seven away with “more than ten minutes”. That’s two hours, but just one climb under their belt – the Intelvi. The route is flat now, north to the head of the lake at Sorico, where the feed is, then south down the opposite bank to Bellano and the second climb of the day.

Meanwhile, we’re disappointed to find no reference to Tom Simpson in the cycling museum on the Ghisallo; it’s a wonderful place though, and like they say in the travel guides; “well worth the entry fee!”

• 13.50: “The seven represent the best teams, but the gap is down to seven minutes as they start the climb at Bellano,” Ale is keeping in touch by SMS, his cell phone isn’t working – yesterday it was the steering on his Audi! We’re watching cycling newsreels in the museum: Baldini, Anquetil, Coppi, Riviere. 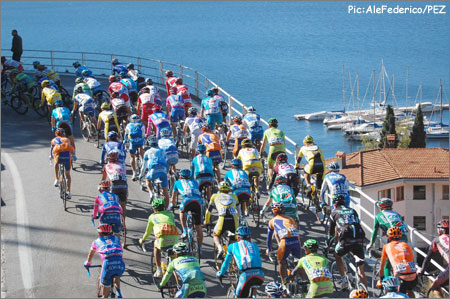 As is typical in the Classics, it was a moderate ride early on…but the hammer hovered ominously, waiting to be slammed down.

• 14.35: Ale is battling with mountain roads, poor sign posting, a hire car and Europe’s worst driving to get us news and pictures. He’s headed for Onno – which is below us on the banks of the third and final part of Lake Como which the race tracks – and the second feed. The Intelvi, Bellano and Balisio will be behind them but the ‘big three’ of the Ghisallo, Civiglio and Battaglia are all just up the road. It’s 44 km from the foot of the Ghisallo to the finish, like Billy Bilsland says; “the race is the last hour – but you have to get to that hour!”

We check the cyclists’ chapel at the top of the Ghisallo; despite the ‘tat’ on-sale outside, the guys play-fighting and eating bananas inside, this is a special place. Ryan Cox’s jersey and Fabio Casartelli’s mangled Merckx hang from the walls to remind us that handsome, fit, strong young men are mortal too. 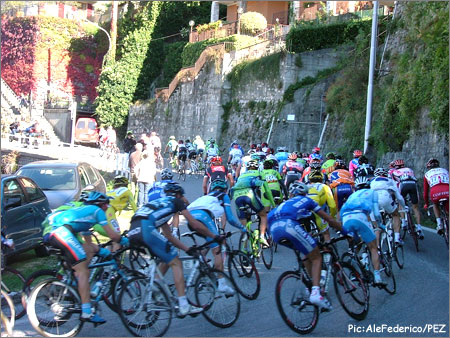 Oh the climbs…the many, many climbs.

• 15.15: “He has to win something soon, doesn’t he?” We’ve found the Cadel fans, all the way from Brisbane. Ale sends me an SMS, “in Onno, still seven with five minutes.” Time to get outside! 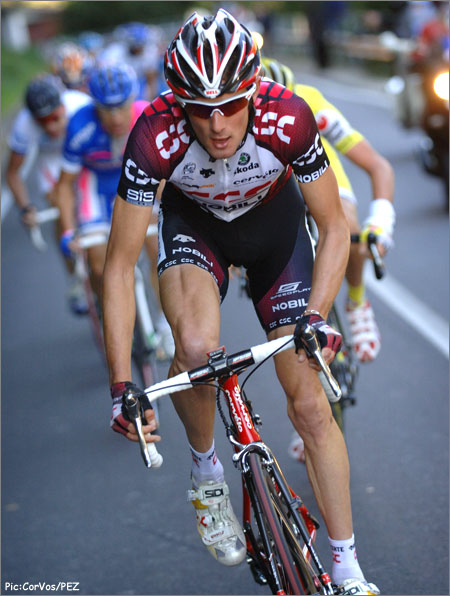 • 15.40: The church bell rings, the moto cop laughs and shakes his head as he waves the crowd back off the road. Then they’re here, a lone QuickStep in the lead, Tosatto, I think, then three, then one, but the gaps aren’t big – here’s the real race, and Schleck is well to the fore along with at least two team mates. Sanchez is there but breathing hard, he’ll have to be special on the descents today. Bettini? Well back, it doesn’t look like Paolo’s day. 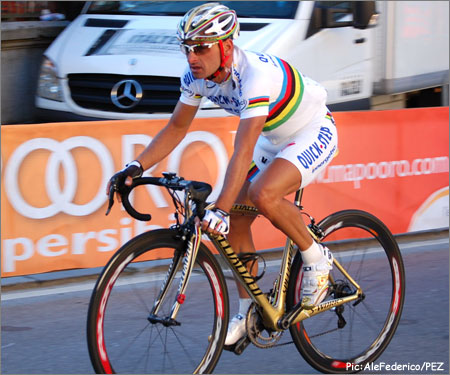 There’d be no three-peat for Il Grillo today.

• 16.03: The mood isn’t good in the cafй at the top, Italian TV is running late with the coverage, finally we’re treated to Paolo winning last year, spliced neatly into him sliding out the back on the Ghisallo fifteen minutes ago. It was Tosatto at the head over the top, and he still leads. The expensive lenses on the TV cameras struggle to keep-up with the contrasts; glaring autumn sun to long, dark shadow and back again to autumn sun, all in a second. Behind it has congealed on the descent and there’s a big group chasing the lone QuickStep. 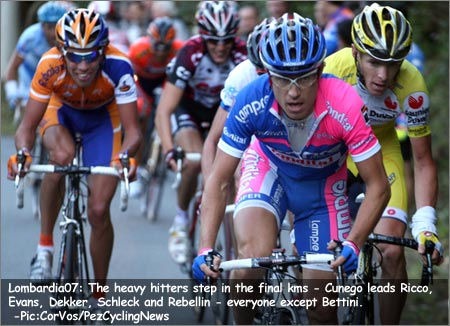 • 16.15: There are splits behind the Italian as the Civiglio climb begins. Tosatto is history as CSC fire in-form Dutchman, Karsten Kroon up the road. Good tactics, he’s not a rider you can bluff with, give him enough rope and he’ll win. Past Lombardy-winner Cunego (Lampre) is instrumental in bringing him back. 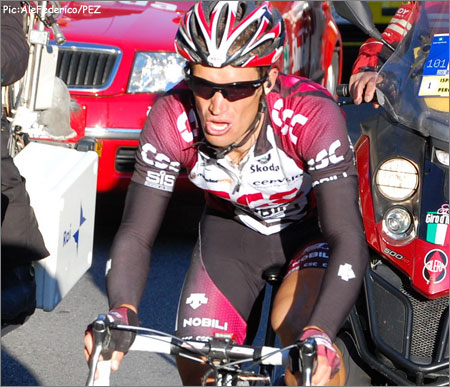 CSC was all over the place today…Kroon’s move off the front was impressive.

Cunego, Schleck (CSC), Ricco (Saunier) and Evans (Lotto) form an elite group at the front as the drop starts – just one climb to go. (They’ve opened the French windows to let the fans outside the cafe see the TV, I hope I can hold-off the frostbite ’til my report is finished.) 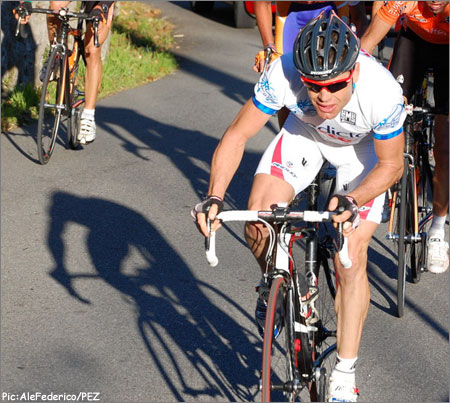 Cadel Evans was his typical, consistent self today = excellent.

• 16.25: Cunego has given them the slip! Schleck and Ricco chase as Cadel struggles in the corners. There’s a groan from the tifosi as word comes that Sanchez is coming-up. Sammy arrives, he’s nitro-powered today, straight-past Schleck and Ricco – but…

…but Frank Schleck’s dive put a mighty spanner in the works for a CSC win.

Schleck’s down! It’s over for him. He looked back over his shoulder, touched a wheel in front and hit the deck… but he’s up a chasing again with the second group.

• 16.30: There’s another group merged-up up with the capo. Maybe ten at the front now. Sammy has a team mate there and he’s driving hard. But were on the Battaglia, Ricco surges and only Cunego can go with him – . The crowd goes into raptures as they get the gap. 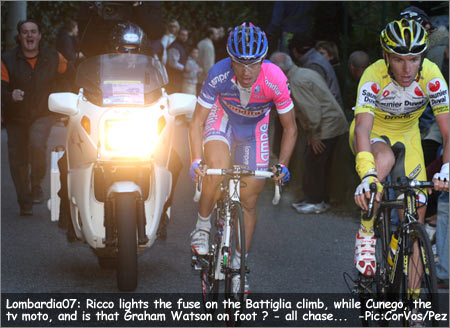 • 16.35: Compatto, but Ricco and Cunego dig again. Cunego looks like he wants it bad, Ricco is strong but he’s on the front too much, Cunego has that white Wilier snuggled-in nicely behind him. Evans, a Rabo and is it a Gerolsteiner? are chasing. 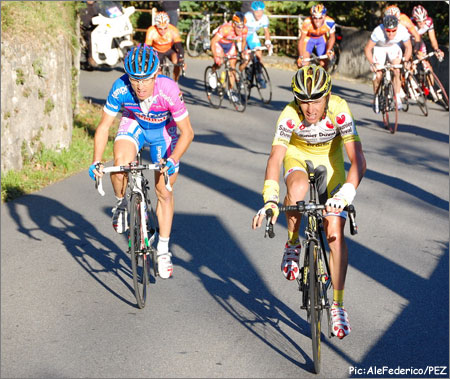 In the late afternoon sun, Ricco and Cunego attacked simultaneously on opposite sides of the road and made the race their own.

• 16.40: Ultimo kilometro and they’re “blowing it”, foxing, stalling, it’s going to slip-away – but the chasers are doing the same thing! Crazy! 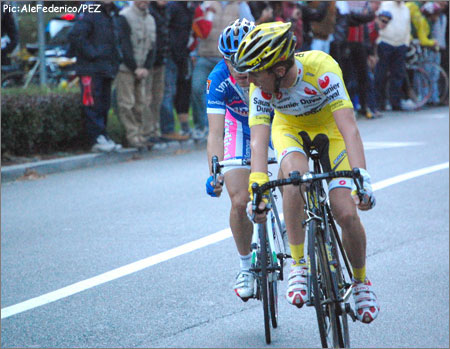 It wouldn’t be a real finish if they didn’t threaten to blow it.

It’s a drag-race between the two young Italians, Cunego has it all the way, that look in his eye on the last climb didn’t lie. Sanchez is third from the chasers; there will be strong words from the Team Directors tonight. 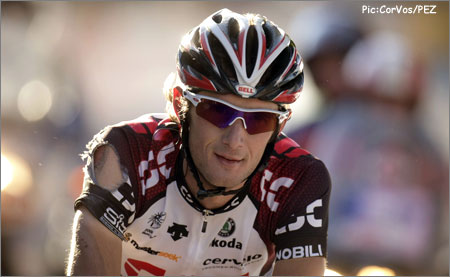 • 16.47: Frank Schleck sighs his way through an interview, if there are winners, there are losers, just ask Frank and Paolo. 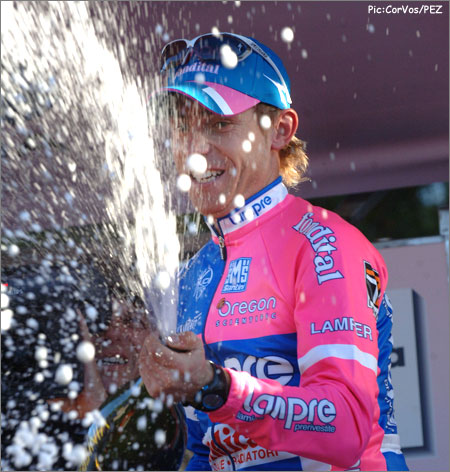 Three years since his first win at Lombardia, the Kid adds number two…at the ripe old age of 26. 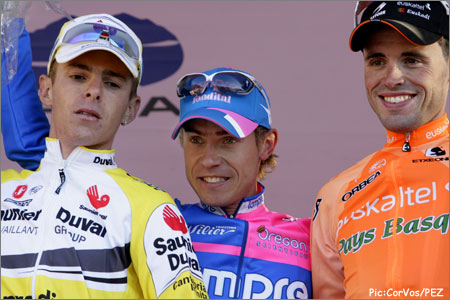