A straight line of almost three kilometres with not an obstacle in sight: the Avenue de Grammont in Tours can lay claim to one of the most prestigious finishing straights in all of cycling, rivalled perhaps only by the Via Roma in San Remo and the Champs-Йlysйes in Paris. This weekend will see a return to the Avenue de Grammont, but the big question is whether a breakaway can hold off the sprinters for the ninth time in eleven years.

Paris-Tours is the final race of the 2007 ProTour calendar not suited for the climbers, and yet, one of the most famous climbers of our generation won it in what was probably the most prodigious win of his career: Tricky Dicky himself, Richard Virenque. That result alone seems to underline the big fat question mark, which seems to define this race. Paris-Tours is oft-purported to be a sprinters’ classic, much like Milano-Sanremo. Just like MSR, the race is almost won in equal proportions by breakaways, or at least that’s how the saying goes. Let’s look at the winners from the past 10 years: 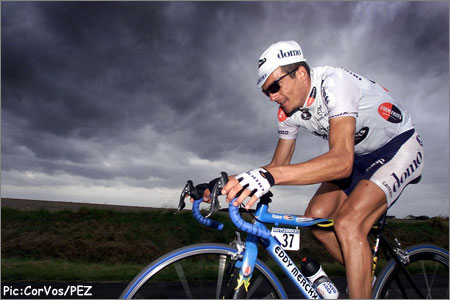 In the last ten years, only twice has Paris-Tours seen a full-on gruppo compatto bunch gallop on the Avenue de Grammont. The winner of both of those sprints? Erik Zabel. 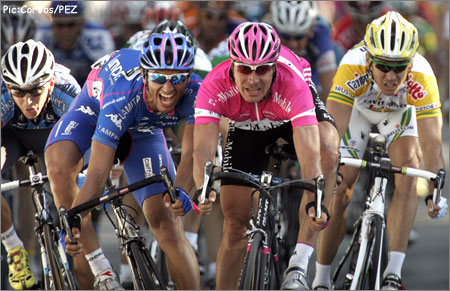 Erik Zabel has three wins to his credit at Paris-Tours, a worthy tally, especially considering the first came in 1994!

The other eight years? Breakaways. Or at least I think so, Tchmil or Tafi could possibly have won a bunch sprint, but I don’t think so…correct me if I’m wrong (and if they DID, then it’s still 4-6 in favor of the breaks). Either way – the devil is in the details, and this purportedly Sprinters’ Classic is proving to be anything but. There are more bunch sprints at the Vattenfall Cyclassics by far. What this really means is that picking a winner is next to impossible. 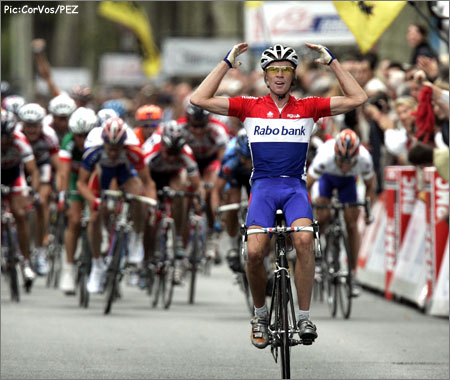 Virenque’s win was nice, so was Guesdon’s, but Dekker’s was absolutely breath-taking. He just wouldn’t give up that day.

Ok, maybe going back ten years isn’t quite fair, but it’s well worth noting. The more appropriate stat might be an even split in the last four years: two for Zabel, two for the breaks.

Let’s Look At The Course
It’s pretty simple really: Paris to Tours via open country roads. Paris-Tours, like other ‘Paris’ races, does not start in Paris proper, but in a suburb, St-Arnoult-en-Yvelines. The race then proceeds in a generally southwesterly direction, passing close to the cities of Chartres, Orleans, and Blois.

The profile is seemingly self-explanatory – flat, but inside the last 40k the roads become hillier with a number of stinging hills that could seal the deal on a suffering rider’s day after 210 km already in the saddle, or conversely, could provide the opportunity for a rider to make the winning move. Coming so late in the year, the weather also can play a big factor in the race, with crosswinds and rain often playing vital roles in forming the race outcome.

Back To The Speculation
Ok, pick your favorite sprinter of the moment: Zabel, Petacchi, Feillu, Hunter, McEwen, Freire, Hushovd, or Steegmans, but when it comes down to it, they’re going to have a sick fight on their hands trying to keep the group together coming down the epic final straight on the Avenue de Grammont.

You’ve got your sprinters sure, but then look around at all of the riders capable of driving the living hell out of a break – Ballan, Pozzato, Gilbert, Voigt, Cancellara, Flecha, Arvesen, Voeckler, Backstedt, Devolder, Gusev, etcetera etcetera ad nauseam. 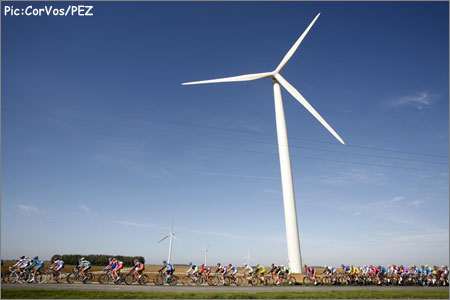 They have those giant windmill things along the route for a reason.

Only a few teams have what they might consider decent bets in a sprint: Milram (for Petacchi or Zabel or both), Predictor (McEwen, but has he done anything much lately? nope), Agritubel (for Feillu, who just won Paris-Bourges), Discovery (for Davis, but they’ve got tons of aggressive options), Barloworld (for Hunter) Rabobank (Freire), and QuickStep (Steegmans). The only two teams you can look at there with decent odds of winning a sprint like this – and thus motivation to sacrifice an entire team for a chase, would seem to be: Milram, Predictor, Rabobank, and QuickStep.

That’s not too different from normal – those are arguably the four best teams for sprints, except this is a hard race over 250km of most likely windy, open French countryside. Look at last year’s results – two in the break, 8 seconds in front of the ‘field,’ which numbered an entirely enormous 35 riders. There were only 67 finishers out of a probable 180ish starters (no I won’t count the DNFs).

It’s hard to get much of a consistent organization on the front of a field when the peloton is only 35 strong. You can’t do too terribly much when half of your team has been dropped or called it a day. 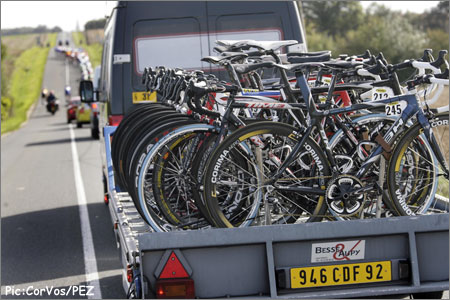 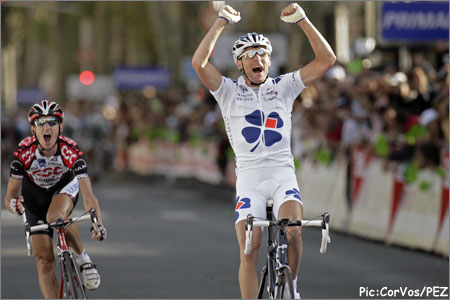 And the break narrowly holds off the field…again.

Of course, last year was a very windy experience, this year might not be the same, and another point worth noting: the breaks seem to all have one thing in common: BARELY making it to the line. There’s a reason, though I hate to admit it, that Paris-Tours is known as a race for the sprinters (besides it being flat of course) – it’s either a field sprint, or very very close to one – always. Very close to a field sprint isn’t a field sprint though, which is why I’m hoping and predicting another successful break. 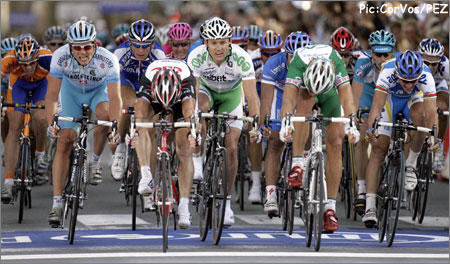 It’s too much fun biting your nails wondering if the break can make it the last kilometer down the ramrod straight finishing stretch, why watch another bunch sprint. We’ve seen umptillion of those this year.

Besides, if my overactive imagination can come to fruition, I see Jens Voigt and Fabian Cancellara trading monster locomotive pulls accompanied by Philippe Gilbert or Juan Antonio Flecha and holding off the perennially hard charging field by a scant few seconds for a CSC 1st and 3rd. Hey, you wanted a prediction right, that’s what I saw in my baseball, I mean crystal ball. 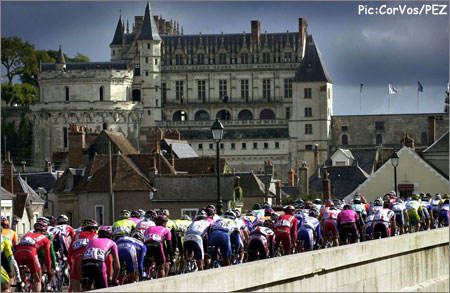 Somebody will win Paris-Tours this weekend no doubt, and another guarantee: that chateau will be there too.

And if reality actually plays a part in the proceedings – there could very well be a bunch sprint, but your guess is as good as mine for this one:

Petacchi seems a logical choice, but he’s iffy in these Classic sprints on the whole. McEwen has never won Paris-Tours or MSR, but he’s won pretty much everything else a sprinter could win – I’d like to see him win this weekend, but is the form there? He was near-ish to the front at Franco-Belge, but couldn’t beat either Steegmans (who is looking to assert himself as the new big-baller sprinter in the absence of Tom Boonen) or Cavendish. Zabel has to be a big hope – he has of course won here three times, and twice in the last four years. If there’s a type of sprint Erik Zabel can win – it’s a sprint after a long, hard race – just look at his palmares. My prohibitive favorite for the sprint this weekend (if it comes down to one) is Oscar Freire. Don’t forget, it’s October, and Freire didn’t win the Worlds, so he’s gotta win something. If there’s a sprint, I go with Freire. If a break goes the distance, I can’t even begin to form a guess as to who will be in it.

Dario’s Diario: As The Season Winds Down