After an action packed day of racing with multitudes of different breaks and a swing for the fences end of the race high powered move – it all came down to a free-for-all bunch sprint on the Avenue de Grammont, the race lived up to its nickname as the Alpe D’Huez for Sprinters today, and what better sprinter than one Alessandro Petacchi?

The 101st edition of Paris-Tours was raced under perfect conditions and as a result, or maybe that’s just how it is, but the racing was incredibly aggressive with breakaways defining the race over each segment. After only 7 kilometers, the first break of the day headed off into the flat, open countryside southwest of Paris – the break was large, numbering 22 and consisting of mainly minor motivated motors. For once though, the peloton was in no need of a piano practice start, for once the peloton did not need to yawn and stretch to get the muscles going – indeed, today the field was in no mood to take it easy, and the first hour covered a rocket fast 48.2 km!

Of course, such a tempo isn’t easy even for the best racers on the planet, and the field fell to pieces, and when the first break of 22 was caught after 93km of racing, it was swallowed by a field that had already been trimmed by half – only about 80 riders.

13km later and still about 150km to go (!!), another break wrested free of the tenacious grip of the bunch. This time, the break was even bigger, 36 strong, and was a significant step up in quality, as it was populated by such names as Gilbert, Napolitano, Van Avermaet, Voeckler, Fischer, Quinziato, plus FIVE CSC riders: Cancellara, Bak, Breschel, Goss, and Kroon. Yeah, five.

Of course, back in the field, some director probably realized that a third of the field had just rolled up the road and any number of them could go the distance, and alarm bells rang loud, long, and true, and so the chase recommenced with a dire fervor not typically seen with almost 100 miles left to race.

For 30km the field and the break played tug of war, with the break never gaining over a minute, and hovering around the 30-40 second mark. At around this point, the break started to lose important cooperation, and why wouldn’t it, they weren’t going anywhere. And so the attacks in the break began, culminating with a three-up move that cracked the code for the day: they would be the long break of the 2007 Paris-Tours. The trio consisted of Manuel Quinziato (Liquigas), David Boucher (Landbouwkrediet), and Serge Pauwels (Chocolades Jacques).

The three-headed hydra sallied off for some highly prized alone time en route to Tours, and finally the gap began to grow and grow and grow, topping off at about 8 minutes, and still after THREE hours of racing, the average speed was an abominably fast 48.9km. For those keeping score at home, that means the second hour was a fire hot 51.1 km.

The gap continually fell, and finally with 7k to go, his day was over.

Alright, Wake Up
Now the race for the win begins. Immediately as Quinziato is caught, an all-star group of three explodes out of the field and makes a hell-bent run for the line. Karsten Kroon (CSC), Philippe Gilbert (FdJ), and Filippo Pozzato (Liquigas) comprised the group, but immediately it was obvious that this would be no smooth rolling finale – the presence of Pippo made Kroon (Kroon wasn’t driving because he had Cancellara chasing) and Gilbert less than enthusiastic about ripping their guts out and flinging them across the pavement in hopes of victory.

For a moment though it seemed like the odds might swing a fair bit to the side of chaos when a four-up group tried to make the junction to the three (keep in mind, the gaps are only seconds during this period), comprised of the megapowered steamers: Flecha, Cancellara, and Gutierrez. They never made it across, and seemingly only provided an intermediate carrot for the boiling field behind.

As Gilbert admitted later: “Pozzato was the fastest of us. 8 times out of 10 he’d beat me in a sprint. It was up to him to assume his responsibilities or not. He didn’t, that’s why our action failed. Never mind,” (CyclingNews). You have to love the brutally honest calculation – there’s no pride and joy or notoriety for the top riders in 2nd or 3rd, and why give everything only to bring a better sprinter to the line who will ‘8 times out of 10’ beat you? It’s pointless. Still, a podium in a big Classic is always tantalizing, which is why a comment like that from Gilbert is so telling – he wanted the win, and only the win, and if he didn’t feel like there was at least a decent percentage chance at victory, he’d play out his hand, but he sure wouldn’t up the ante. 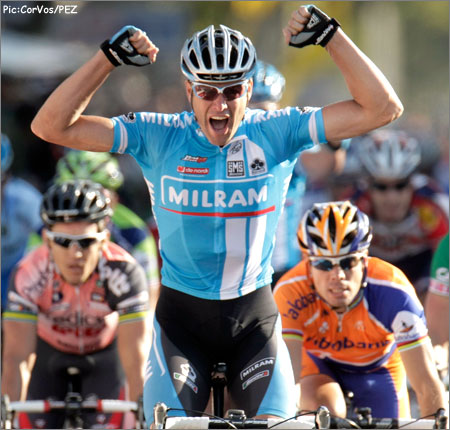 And so it was, a doomed group of locomotives – even with less than ideal cooperation between the three, the field did not pick them up until about 600m to go, and then there was no doubting what the result today would be: a big, fat, sumptuous field sprint.

Let’s Have A Sprint, Shall We?
When the three were caught inside the final kilometer, it was all blue at front, and then on the right side of the road, there were two blue jerseys lined up – one, a three-time winner of Paris-Tours, Erik Zabel, leading out his teammate who, when he’s on, is arguably the fastest man on the planet: Alessandro Petacchi. 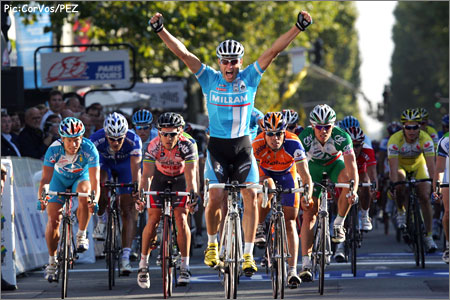 It’s a beautiful sight to behold when the two link up to perfection – it’s an altogether surprisingly rare circumstance, which makes it all the more awe-inspiring when Zabel rockets Ale-Jet to the perfect launching pad, and from there Petacchi shifts into 6th and there’s just not much hope for the rest.

But Wait, There’s More
There’s definitely not much hope when the two quickest sprinters in the game: McEwen and Freire, run into some bad luck. Inside the last 200m there really aren’t any riders faster than McEwen or Freire, and as Petacchi launched around 200 to go, there was an ominous sense of foreboding as the two wolves hovered on Peta’s wheel. Sure, Petacchi had the upper hand and all looked good, but Freire and McEwen have made careers of pouncing by in the final meters. 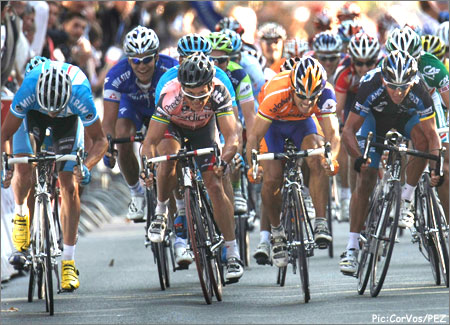 Today though, there’d be no worries for Petacchi as McEwen ripped his shoe out of the right pedal and headed right into Freire and disaster loomed. Thankfully, both Freire and McEwen managed to keep it upright, but it was a frustrating finale for the two, as they had to be licking their chops if they were on good days. We’ll never know though, and even if they were – if Petacchi was as good as he looked, it would have taken a special sprint to come around Petacchi.

Chappeau to Petacchi and Zabel and the always hard-working Milram boys…and hats off to sprinting finales as the tally goes to 3-2 in the last five years in favor of the sprinters.