PEZ In The Trenches : Hasselt Six, Nights 1 and 2

Once again PEZ-man, Ed Hood, is doing the dirty work at a Six Day – cleaning, running, sorting, tending to, washing, and anything else humanly conceivable that needs to be completed. Luckily for Ed and the rest of the travelling circus, Hasselt is the final Six of the winter season. Ed brings us up to speed on the first two nights.

It’s half way through the first Madison of the Hasselt six-day and Franco Marvulli is “resting” above the blue line, last time he looked-up to see where partner his partner Risi was, Bruno was riding behind two other riders in an attacking group. But in the time it took Franco to look away from the action then look back to find Bruno and ready himself for the change, Bruno has jumped the other riders and put them a huge expanse of plywood behind him.

Meanwhile, Franco looks back across the track, expecting to find Bruno still in the little string, just as Franco thinks; “where’s Bruno?” the small, rapid gentleman in question whistles underneath his big partner, hurling oaths in a variety of European languages. Even if your name is Bruno Risi, a double-spell isn’t fun and, as Bruno said later: “in that moment I could have happily killed you, Franco!” Just goes to show, even the very best get it wrong sometimes. 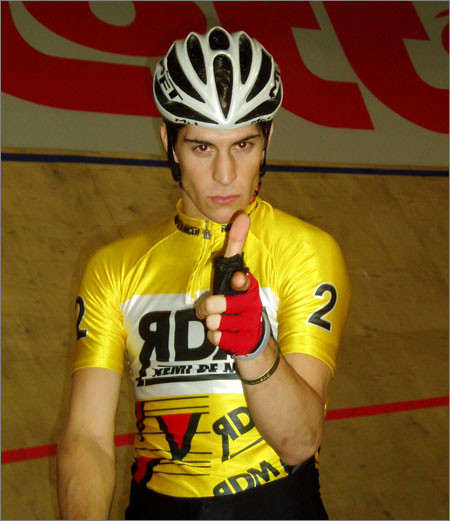 So he made a little mistake in the first madison – he’s still the man – Franco Marvulli.

It’s the last six of the season but there’s no end of season mood here, Bruno and Franco have both won seven sixes this year (if you count Franco’s summer six-day wins) and both are anxious to go the eight. If my stats are to be trusted then only one rider has ever managed eight six day wins in one season – Patrick Sercu who as part of his 88 wins managed it twice 1977 and 1979. However, home-boy Iljo Keisse is keen to repeat last years win, he’s with Marco Villa this year, regular partner Matt Gilmore is still on the bench after a road crash last summer. 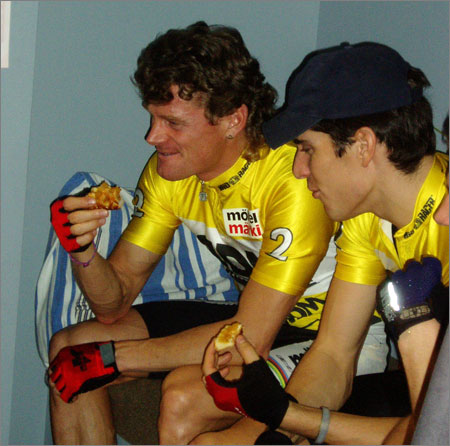 The best duo in Six Day racing, Marvulli and Risi, enjoy the spoils of success: cookies, lots and lots of cookies.

Talking of road crashes, Bob Slippens is back in his first six of the season after a bad crash late last summer; he was showing his ribs to someone tonight and has a row of little bumps down his rib cage where the joints are; he and partner Danny Stam complete the trio of teams from where the winner will come. 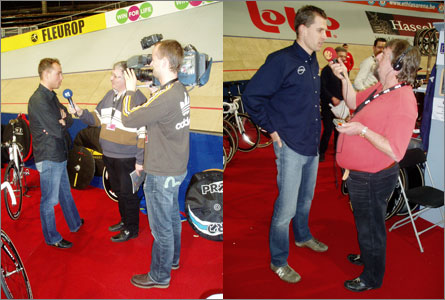 Nys and Vervecken squared off in the track warmer on Night 1. Nys won comfortably, but Vervecken is still taller and still World Champion.

“Track warmer” for the night was a pursuit between cyclo-cross riders, Sven Nijs and the man who has the only thing in the world that Nijs doesn’t have the wherewithal to buy – the rainbow jersey – Erwin Vervecken. Erwin really is a big guy when you see him in the flesh and he’s no fashion victim either, in Fidea team shirt, jeans and battered trainers. Nijs looked good on his low-pro and beat the big guy without too much problem, the difference between the two rider’s teams was apparent though. Nijs (Rabobank) on a pukka Colnago pursuit bike but Vervecken (Fidea) on a very standard Ridley track bike with clip-on bars which meant he couldn’t get low enough and was catching a lot more air than Nijs.

In the first time trial of the night – the flying lap – Slippens and Stam went well, finishing third; it looked good for the Orangemen. Sensibly, the organisers got the first chase of the six out of the way early in the evening, to calm the nerves – it was the fourth race after a sprint series, devil and the time trial. Slip-ups apart, Risi and Marvulli looked to have just too much fire-power for everyone else, finishing a lap ahead and with best points total. Whilst Slippens looked good earlier in the evening during the one lap battle with the watch; in the chase he was visibly hurting. 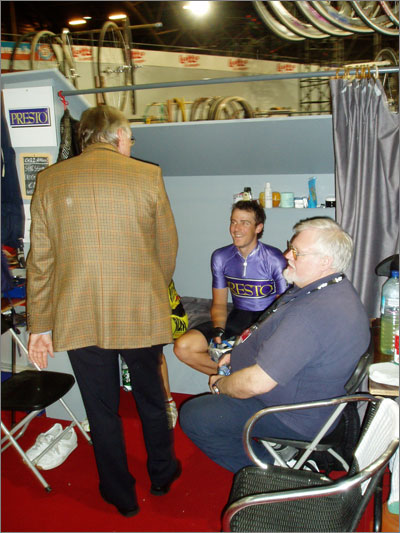 New Six Dayer, Kiwi Marc Ryan, is paid a visit from the man himself, Patrick Sercu.

He wasn’t the only one; Wouter Vanmechelen went for a lap, cracked and would have been quicker walking past the cabins. It wasn’t the greatest Madison ever, but it was tough, straight racing; just a pity the crowd wasn’t bigger. Our other rider for the week is young Marc Ryan from New Zealand, he lost six laps during the 45 minutes plus 10 laps, but it’s his first six and one where Bruno and Franco are rampant. What hurt Marc as much as the Madison was the brass band which struck-up immediately after the chase finished – they were dire.

After the Madison, Marc’s partner, Gerd Dorich came by to talk tactics – he was cool; patient, friendly and knowledgeable. Dimitri Defauw and Alexander Aeschbach won the three lap time trial to go with their one lap win earlier in the evening – old Dimitri is quick all right. Last race of the night was the derny final where Marco Vila celebrated his birthday in style by winning. 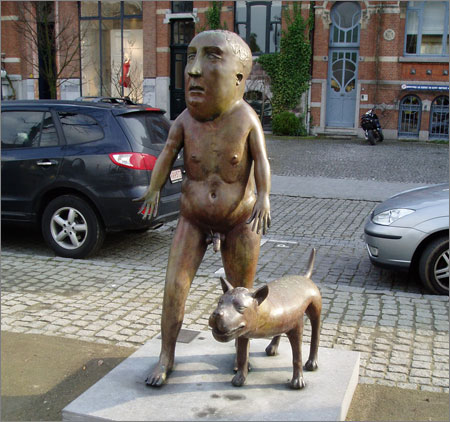 Uhhhh? The ‘Man And Honde’ Statue in Hasselt.

Day Two
Matt Gilmore came to visit today, he seems to be walking OK, but some say he’s exacerbated his problems by trying to walk and ride too soon – I wouldn’t want to be the guy to try and tell him though. The six-days are a feudal world, many riders don’t talk to any of the support staff except their own and to emphasise the social divide, Marvulli, Risi, Keisse, Villa, Slippens and Stam are staying at the Holiday Inn whilst all the other riders are with us at the Holiday Inn Express. Some small riders, who think that they are big riders, strut around trying to pretend there are no mechanics or runners in the breakfast room here.

Franco popped along to see us this morning, he was up at 09.30, but can’t go back to the room until 12.00 – that’s when Bruno gets-up and you disturb perfectionist Risi at your peril. 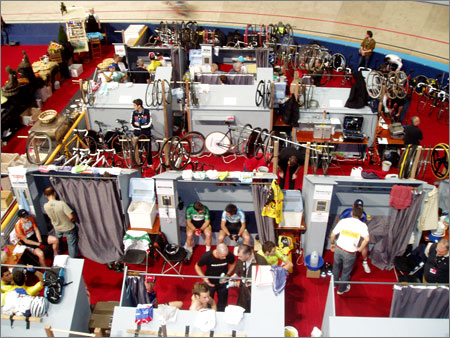 Back at the track the mechanics are building-up road bikes for some of the riders, Bobby Traksel’s carbon, Unibet Ridley is especially nice.

It was a rolling presentation tonight; Marc said that all the kicking-back gave him sore legs. The hall was only around quarter full though; the venue is good, the racing not bad at all, the 70’s disco is cool but there’s no substitute for a screaming crowd. Bruno and Franco were chasing points tonight, winning the devil and then the three lap time trial, beating Aeschbach and De Fauw by one hundredth of a second. 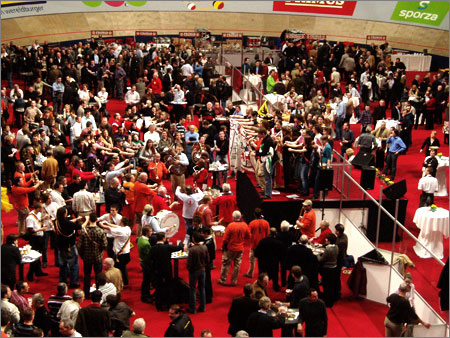 Not too terribly many fans in attendance could spell the demise of the Hasselt Six. So if you’re reading this and you’re near Hasselt – go!

Alexander and Dimitri took their revenge in the one lap test where they won from Franco and Bruno by a big margin. The Belgians like their derny racing and I got it right when I told Kris that Keisse would win, it’s a pity there’s no bookies here.

At 22.00 hours Bruno and Franco went two laps clear when they reached 100 points – that gives a ‘bonus’ lap. Bobby Traksel hit the plywood during the team devil and had to go to hospital, later we heard he had a collapsed lung – get well soon Bobby. His partner, Peter Schep got to sit the last chase-out – he didn’t seem too worried, especially when Bruno was impersonating the 23.15 to Brussels. 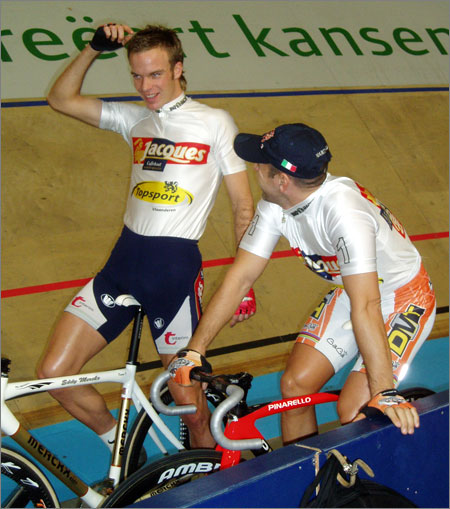 Iljo Keisse makes a point to show Marco Villa that his mullet is inspired by the great Risi.

That last chase started furiously but it was apparent that there were “agreements” in place as Keisse and Villa finished the night on top of the leader board; that would please Iljo’s dad – he’s never far away.

Clean up the track cabin, wash-out the pails, carry all the rider’s gear up to the big cabin, hang-up the washing, tidy the cabin – just what you want to be doing at gone 1.00 am, but I love it really.

Will the weekend crowds be bigger; will Franco and Bruno go back on top; will there be more stats for you? I’ll let you know on Monday; now, where’s my rubber gloves?

All pictures courtesy of the man himself, Edmond Hood.