If you find yourself in Belgium in the spring, chances are you will have to do all of the regular tourist things like sample the handmade chocolates, put mayonnaise on your frites, buy mum a lovely piece of lace and maybe even sample a beer or fifteen. If you are looking for something a little more exciting to do, get out the bike and hang onto your PEZ cycling caps because the biggest two weeks of racing on the Belgian cycling calendar is just about to kick off.

The cycling bonanza sees many of the world’s top teams and riders descend on the Flemish region of Belgium for the series of races that incorporates the Vlaamse Wieler Week (Flemish Cycling Week) and also includes the mother of all Belgian classics, the Tour of Flanders.

Let’s Get To Racin
Dwars door Vlaanderen (Race across Flanders) kicks things off on Wednesday March 28 with a 200km warm-up ride from Roesealare to Waregem. Won in 2006 by Frederik Veuchelen of the Chocolade Jacques team (in sterling fashion: a very, very long break), the UCI 1.1 race has a good mix of Pro Tour teams tuning up for the big races and local squads keen to show they have what it takes to take on the big boys. 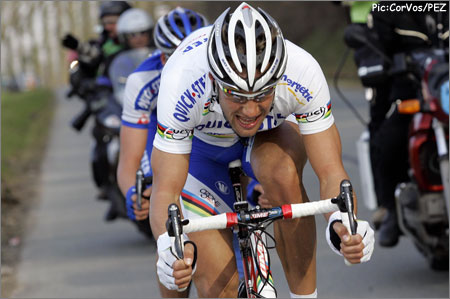 Tom Boonen didn’t win DDV in 2006, but he made his presence felt in a big way with three gargantuan attacks.

The 2006 route includes the climbs of the Berendries, Valkenberg, Eikenberg and the Oude Kwaremont, all of which will feature in the Tour of Flanders.

The mechanics then have a two day break to clean and re-tune the bikes before its back to the action with the E3 Prijs Vlaanderen, on Saturday March 31.

Tom Boonen’s Race
2007 marks the 50th edition of this race, sometimes known as the E3 Harelbeke, and like any good UCI 1.1 ranked race, the winners list is a who’s who of hard man cycling. Rik Van Looy, Roger De Vlaeminck, Walter Planckaert, Jaan Raas, Phil Anderson, Olaf Ludwig and Mario Cipollini are joined on the winners list by the usual suspects of Johan Museeuw (1992 and 1998), Andre Tchmil (1994 and 2001), Peter Van Petergem (1999) and a certain T. Boonen who has managed to cross the line first, in each of the three previous editions. 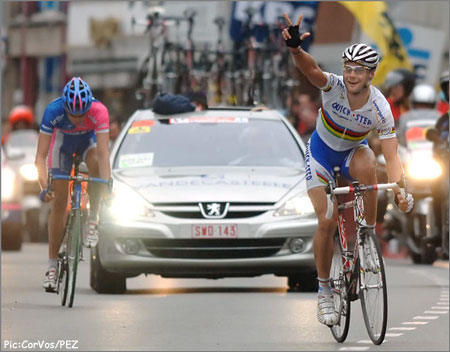 Last year was Boonen’s third in a row – he took Alessandro Ballan with him and dusted him in the sprint.

The 203km race starts and finishes in Harelbeke and also again includes the famous Flemish climbs of the Boigneberg, Eikenberg and Taaienberg, as well as the testing Paterberg which is only 400m in length, but averages 12.5%.

Tired yet? If not, give De Brabantse Pijl (The Brabant Arrow) a go the next day. De Brabantse Pijl is a leisurely 200km from Zaventem near Brussels to Alsemberg. Again it is a mix of ProTour squads and continental teams but this time there is a big lap of 117km followed by 5 local laps of 16.6km. 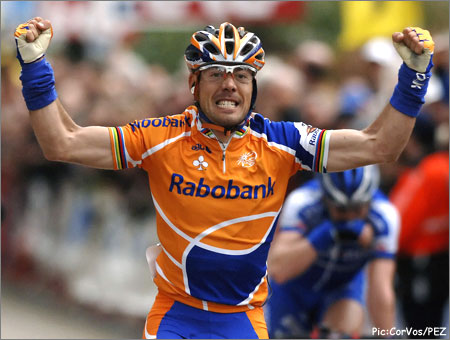 Expect to see a lot of riders heading to the showers early as there is always tomorrow and passing the team bus five times when you are 3minutes off the pace takes an awful lot of willpower. Last year’s winner: Oscar Freire (SPA) Rabobank.

The Final Tune-Up
If the legs are a bit tired, have a few days break (hey, who wants to be around cyclists on April Fools’ day?) and rest up for the Driedaagse van De Panne-Koksijde (The Three Days of De Panne) starting on Tuesday April 3rd. 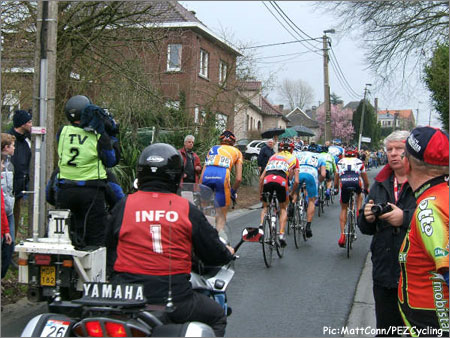 If you haven’t gotten enough of the bergs, here, try a few more.

Just what the doctored ordered: A stage race! Starting and finishing in the Belgian coastal resorts of De Panne and Koksijde near Oostende, the thee day, four stage event is seen as the last big hit out before the Tour of Flanders, and a huge indicator of potential success for the big game. 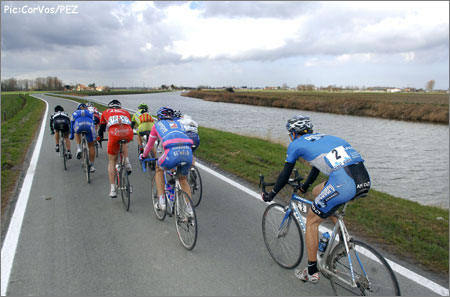 Like many small stage races without big mountains or long time trials, the overall winner will come from a breakaway on the very selective and hard-fought first day. If it rains, expect to see the peloton break out the rain jackets and roll in 40 minutes in arrears. If it doesn’t rain, they’ll only lose 20. 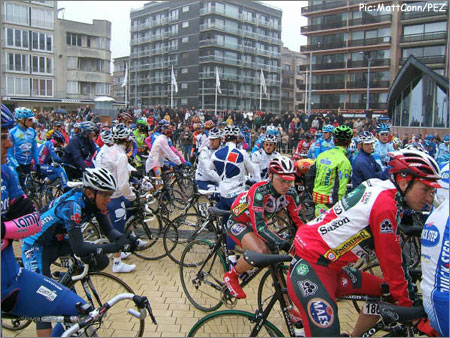 Highlights include a visit to Zottegem (finish of stage 1 and start of stage 2) where you can go under the square where they park the team busses and see the Graaf van Egmont (the Count) and his wife in their glass topped coffins. They were beheaded by Spanish conquistadors during The Inquisition in 1568. These days the locals should be a lot more welcoming if the Spaniards Freire or Valverde storm the town. 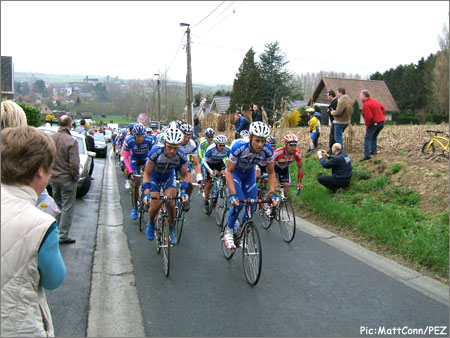 Don’t save your autograph hunting until the time trial on the final afternoon as many riders don’t take the start for the 11km drag race. Those not in contention, or who have bigger fish to fry, would rather not bash about in the coastal winds, jumping over tram tracks on a TT bike, just to cement their claim to 89th position on GC. 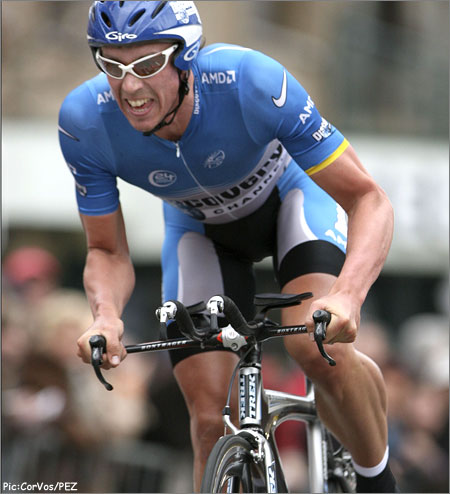 It wasn’t too much of a surprise when Hoste got away with Boonen at De Ronde a few days later – he did, after all, win two stages of De Panne.

Don’t crash into bed at the hotel too soon. It’s Friday and the team will want to ride over the trickier sections of Sunday’s Tour of Flanders route. And no, you can’t leave it until Saturday because there will be 20,000 cyclo tourists playing out their Museeuw/Boonen fantasies over the course, out you go. 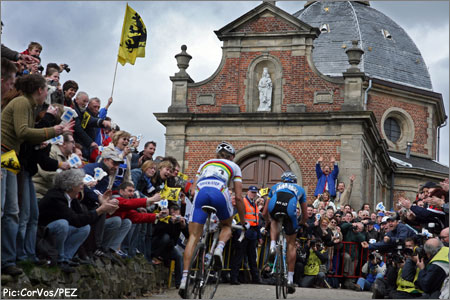 Saturday is for the fans on the course of De Ronde – everyone gets their chance to follow in the paths of their Flemish heroes up the Muur.

The Big Day
Sunday April 8 is the big one. The Tour of Flanders or as the locals know it, the Ronde van Vlaanderen. 256km, 18 hills, 20km of cobblestones and more screaming Belgian cycling fans than you could poke a Lion of Flanders flag at.

Tom Boonen will be the big favourite unless he falls off in one of the lead up races or declares on the start that he is only here to help Bettini win. 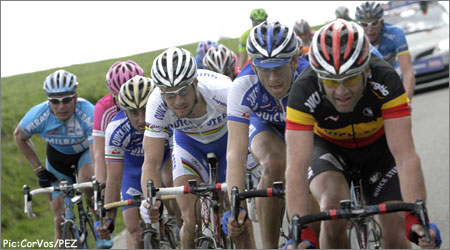 The faces on Quick.Step might have changed a bit, but Boonen will more than likely start De Ronde with enormous favorite status.

There are a number of certainties with De Ronde, other than the fact that Boonen will win (well, he will!).

1. There will be a small rainforest’s worth of trees used to generate the newsprint in the lead up to the race. Even if you can’t read Dutch, it’s nice to hold a newspaper that rates football as a second rate sport, even if only for a few days.

2. The start in Brugge (you’re in Flanders, don’t call it Bruges) will be so crowded you are better to stay at the home and watch it on TV. 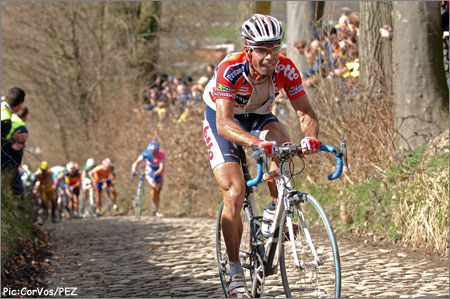 De Peet will sit last wheel for the first two hours, but when it’s time to race bikes, he’ll be front and center.

3. Peter Van Petegem will be last or second last to roll out of the start and then will sit at the back of the peloton for the first 90km.

4. A break will go away containing a handful of guys that you have never heard of from teams you have never heard of. Their dream: to emulate Jacky Durand who won from a breakaway, long before he had a name as a rider who won from breakaways. Their reality: to try and stay away until 1400 local time when the live TV coverage starts. What good is a wild card for a Pro Tour race if your sponsor doesn’t get on the TV!

5. Whichever of the two Belgian superteams wins, the other will be treated by the press as if they were something you would scrape off the sole of your shoe.

Ok, now you can go and get a massage, but sorry to all those Spanish climbers, you cannot go home yet. You have to be back on the bike on Wednesday for Gent-Wevelgem. Another semi-classic that has gained ProTour status so will see all of the big teams. The midweek race starts in Deinze and heads back to West Flanders for a lap of towns infamous for the WW1 battles that were fought there. 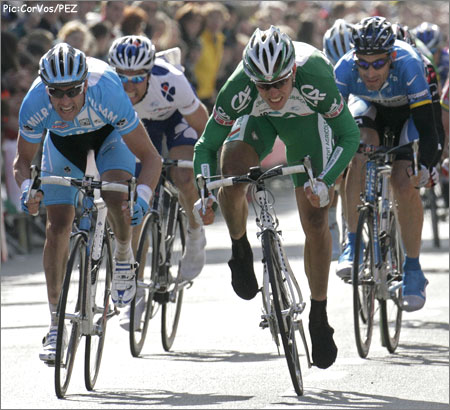 Twice up the Kemmelberg will sort the men from the boys and the lightning cobbled descent will be waiting to catch out those not paying attention.

On past Ieper and Menen to the finish in Wevelgem for a total of 207km.

So there it is. Eight days of cycling, a touch over 1600km (or 1000miles) and you didn’t even need to leave the Holiday Inn in Gent. Who could imagine a better way to spend your time in spring.

Stay tuned to PEZ for full reports on all of the spring classics etc etc.