Giant Bicycles invited Pez to joint a select group for dinner and the opportunity to meet the T-Mobile Men’s and Women’s pro cycling teams racing this weekend’s Philadelphia International Championship. Judging by the menu we knew it would be another great evening. Did I mention that there were Maglia Rosa and TDF stage winners in the room, and a few World Champions? 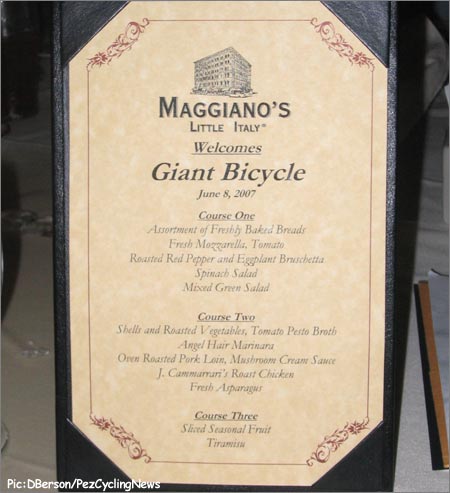 Team Manager Bob Stapleton introduced the team and spoke with enthusiasm about each of the riders past and current accomplishments. 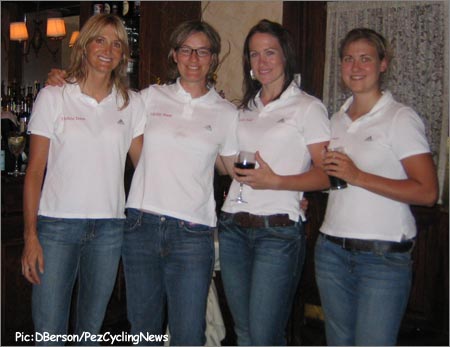 A few notables in attendance:
Marco Pinotti-Maglia Rosa wearer in 2007 Giro, Ina Teutenberg and Bernhard Eisel-Winners of the Tom Bamford Lancaster Classic and Reading Classic.” Stapleton went on to say that Ina is the most feared on and off the bike.”
Jakob Piil-Tour de France Stage Winner.
Greg Henderson-Last years Philadelphia International Championship winner.
– and all-round hard-man Roger Hammond. 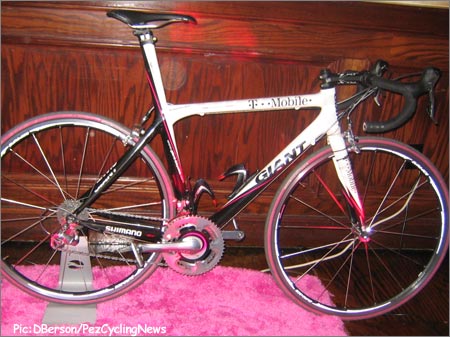 Stapleton spoke abut how proud he was of his partnership with Giant. “The relationship works and were thrilled to have Giant as a partner,” said Stapleton.

Joe Wentzel, owner of Breakaway Bikes and sponsor of the Verducci-Breakaway team said that “Giant has a lot of selection and that the brand is innovative. They are at the front of technology but are competitive in price.” Wentzel went on to say that during the Philly race week “interest picks up and the shop on Chestnut Street in downtown Philly is extremely busy. One of his coaches, Tyler Wren, previously featured on Pez is riding the race for Colavita-Sutter home p/b Cooking Light (USA) team that adds some extra excitement around the shop. 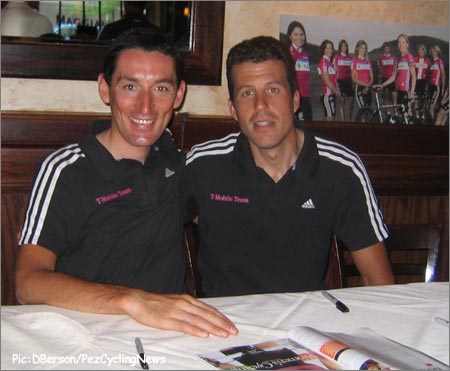 Marco Pinotti had just arrived to bring some of his Pink Jersey form to help the team win Sunday’s Philadelphia International Championship. Asked about his impressions of Philadelphia Pinotti said that “Philadelphia is nice. It’s big but you have nice riding in only 15 minutes. In 2005, the same year I was 12th here, I did a three hour ride on the local path.” Pinotti went on to say that he “is tired but has good form” and wants to help the team win. When asked about the difference between riding in Europe and riding in the states he said that “the level is the same but that there were 50 riders that can win while here there are 15.”

Aaron Olson said he “likes the race a lot, Philly is always a nice place to come, the crowds in Manayunk are crazy.” This is the first time Olson will race this as a non-US Championship event having missed last year’s race but he said “to win here now would be just as prestigious.” Olson also brought his Giro form to Philadelphia but was keeping things “low key” before Sunday’s race with just a little shopping and a few good meals to take up his time. Both Pinotti and Olson liked the 94-degree weather and said that “the hotter the better” for Sunday. 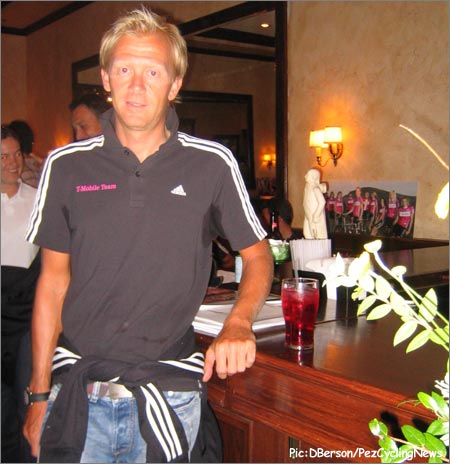 Former CSC rider Jakob Piil, now riding for T-Mobile said he “loves racing here but missed last year.” Asked about how the change of teams has been Piil responded that things are “perfect.” He went on say that “there are a lot of young riders and they are really doing good while at CSC the emphasis was with the older riders but that both teams are similar in that they are well organized.”

Jakob’s goal for the season was to make the TDF team but a recent knee injury will force a two-week rest soon. According to Piil he’ll have to “look for the last part of the season, possibly the Vuelta, and then see what’s best for me and the team.”

This reporter asked Piil how the team was handling the recent T-mobile admissions and general state of chaos that cycling is in. Piil said that the team’s riders are “taking it calm and in the end it’s good for the port to get cleaned up, especially for the young riders. Doping isn’t possible for cycling.

Stay tuned ere at Pez for more on Philly’s happenings.