The USPRO, I mean, Philadelphia International Championship, is the crowning finale of the mega-rich Triple Crown series, and even though it’s not the US Championship anymore, it’s still one of the most coveted one day races as well as the longest in America, and a big ol payday to boot. Greg Henderson took the win in a field sprint last year – would it be another bunch gallop, or could we perhaps be in for a breakaway treat a la Wherry’s 2005 win?

Retraction Notice: In our first posting of this story, we mistakenly reported that Dominique Rollin was returning from a recent doping suspension. Team KodakGallery’s Rob O’Dea immediately called to clarify that this allegation is in fact false and that Dominque has never been suspended for such a violation. PezCycling, and the author wish to apologize to Mr. Rollin, the KodakGallery team, its sponsors, and our readers for our error.

The Philadelphia International Championship consists of 2.5 opening laps of a small, little circuit, followed by 10 big lap of 14.4 miles apiece – each lap requiring the summiting of both the Manayunk Wall and Lemon Hill. The Manayunk Wall is pretty much the most famous part of the race, measuring about a mile long and heading to the heavens at about a 17% clip. After the 10 big laps, the race heads on to three small laps, which will include Lemon Hill and bring the grand tally of miles covered to 156 (251k). 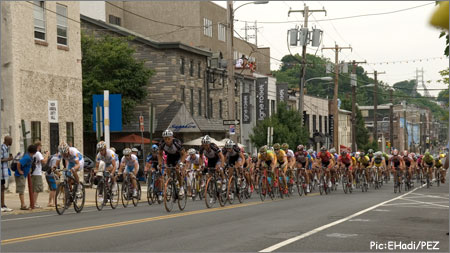 Check out the various teams getting their guy in a good spot leading into the Wall…amazing.

Yesterday was a sweltering day in Philadelphia – hitting almost 95, and it looked like the racers would be in for one helluva hot one on Sunday, but fortunately for many, and a bummer for some, a storm rolled in overnight and dumped some serious water as well as driving down temperatures significantly, and today dawned lovely and a high of 80 was on the docket. Racing started with temperatures in the low 70’s – a perfect day for a bike race.

The tradition at Philly is for a break to get away quickly…some sort of break will roll away, usually in the first lap, and that will set the tone for the day. An early break was the goal for many, but it would NOT be the case today. As per the norm, breaks went literally from the gun.

At this point, I could start to run through the names of the bajillion different breaks and their different riders, but none are really all that worthy of mention, but the effect is: it was hard, and it was hard all day long. 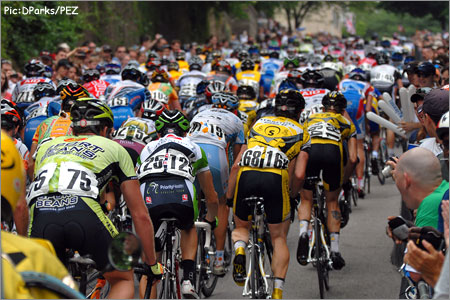 Oooh, that’s a mean one.

Since I wasn’t there, and this is all just words from a not to close to the race observer, I figured it best to get some people who know what’s going on on the phone, so I called up former fast man Erik Saunders, who in turn got on the phone with Successfulliving.com/Parkpre manager, and bike racing legend Steve Hegg (we’ll take his word as authority): The average speed was 28.9 mph (that basically tells the story). It was insanely fast. Ryan Yee, a rider on the Successfulliving squad affirmed: it was just insane.

So in as few words as possible, the race can be broken down as such: 28.9 mph…nothing can get away…bunch sprint inevitable…and I guess the word: insane, would also be appropriate. 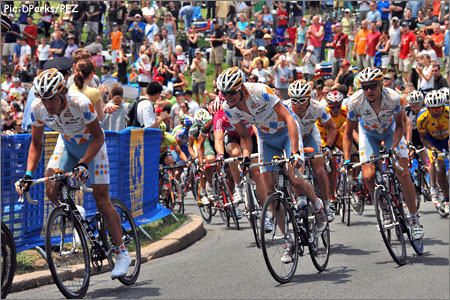 Lemon Hill isn’t too terribly big, but it sure must tickle after 150 miles.

I think Saunders puts it best: unlike the case in previous years sometimes, everybody was just keyed up today, everybody thought they were in with a chance to win, so it was crazy fast. 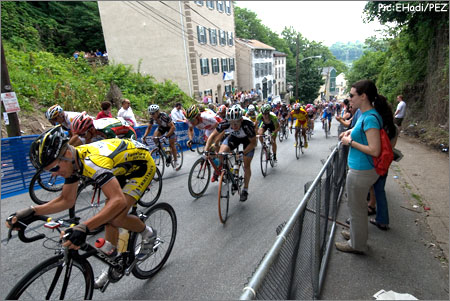 50 guys finished together in the lead group (out of an original 150++). No one team tried to pawn anything off on anyone else, everyone just went out there and rode hard, and that’s how you get a nearly 29 mph average for 156 miles over a hilly course!

So now we’ve established that the race was fast, breaks were flying off willy nilly everywhere with virtually all of the teams represented and firing, fast forward to the finale… 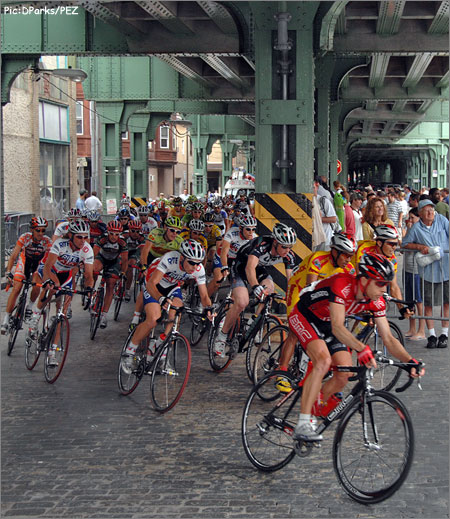 Get ready for the Wall…

Even in the finishing circuits, it’s literally impossible to follow the innumerable attacks, and the entire time it’s impossible to tell if one of them will be successful as no one team has taken command of the race. The attacks go, riders bridge, it comes back together, the counter dutifully follows, etc etc ad nauseam. Absolutely brilliant racing. 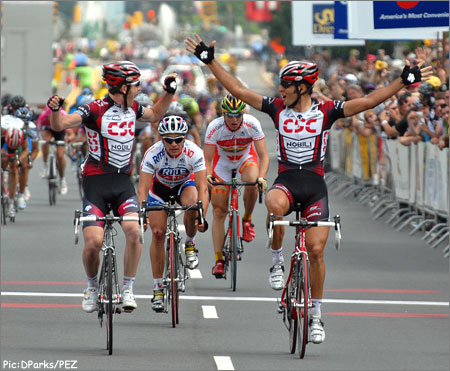 Unfortunately for T-Mobile, CSC came right over the top as Matthew Goss ushered Argentinian speed demon (and very, very familiar face to American racing) Juan Jose Haedo to the fore, and just like that, the T-Mobile train went kaboom, Haedo swooped in for the win, followed by his young Aussie teammate Goss, and then came Eisel. 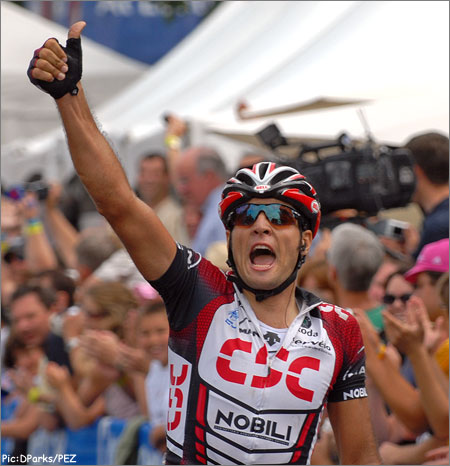 Not one little bit upset about that win.

In 4th was the interminably impressive Alejandro Borrajo of the Rite Aid squad. The former Panaria rider and Petacchi challenger, once again rode himself to another superb finish. Rite Aid cannot be happy enough to have somehow swiped a rider of Borrajo’s caliber for 2007. Behind Borrajo was another 2007 standout, young Canadian, Dominique Rollin. Rollin has been nothing short of excellent all year, and today showed once again why he’s a name to keep a look out for. 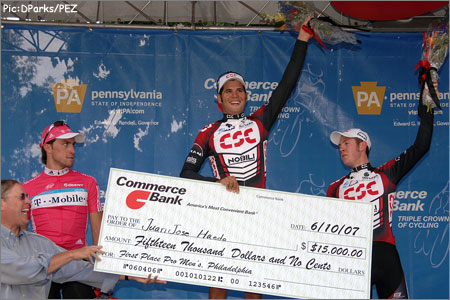 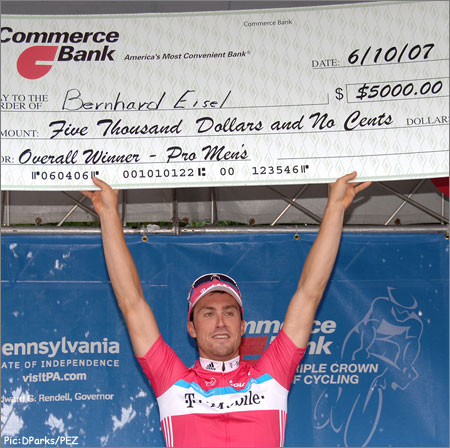 An extra five grand to go with the winnings from the other two days…nice week’s work!

For Haedo, it’s just another gem in his rapidly growing bag of victories.