Arenberg, the Forest of Arenberg, le Tranchee or Trouee d’Arenberg. Whatever you chose to name this stretch of cobbles it’s writ large in cycling legend. We chose it as our first section, there are 28 sectors so we couldn’t cover them all. We chose the iconic sections, a new section and the final sections. 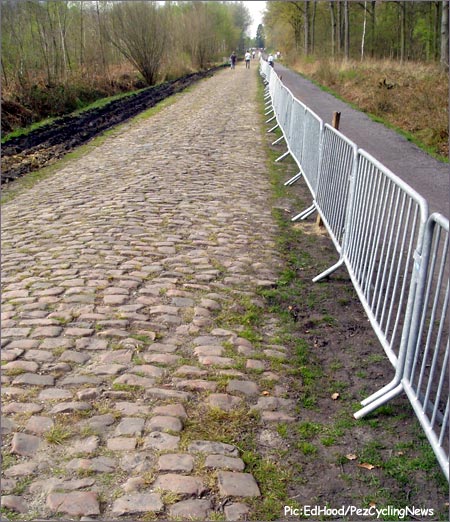 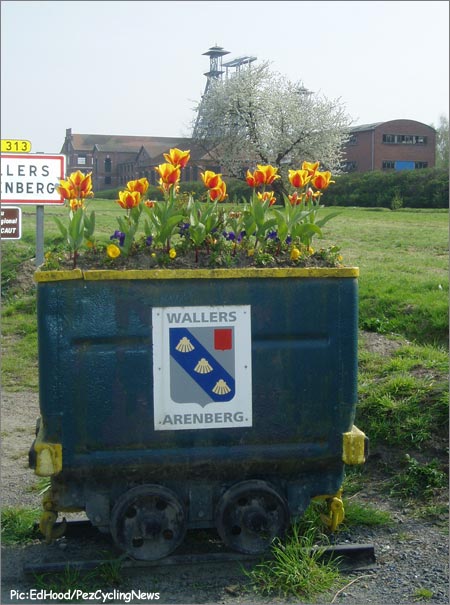 When you see the giant mining towers, you know you’re about to enter the “Trench of Arenberg”. Gee, it looks so pleasant today…

Arenberg is cobble sector 18 in the 2007 edition of Paris-Roubaix – they count-down to the finish – and comes at the 163 Kilometre mark. In the interest of Pez’s loyal readership we walked all 2.4 kilometres of it, twice – out and back. There are approximately 280,000 cobble stones in there, that’s 2,400 metres x 120 cobbles per lineal metre. 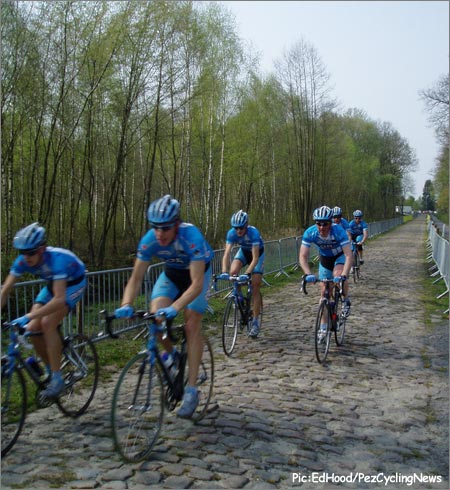 Friday is the day to see the teams – like Milram here scoping the cobbles.

As a journalist, your job is to paint word pictures and try to take your readers there with you. If you love the sport it’s not so hard; there’s speed, action, drama and colour; but how do you bring 300,000 chunks of stone to life? 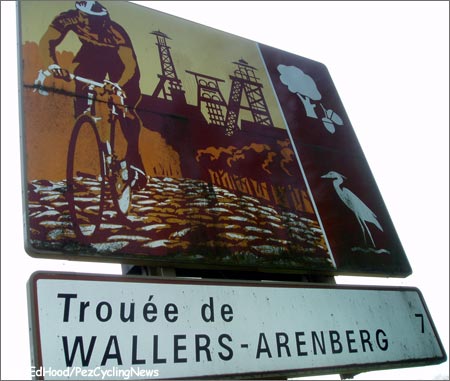 We’re not in Kansas anymore…

From what I’ve read the route through the forest was originally a Roman road, it’s certainly arrow-straight. The current cobbles were laid much later to haul coal from the mines to the steel works. 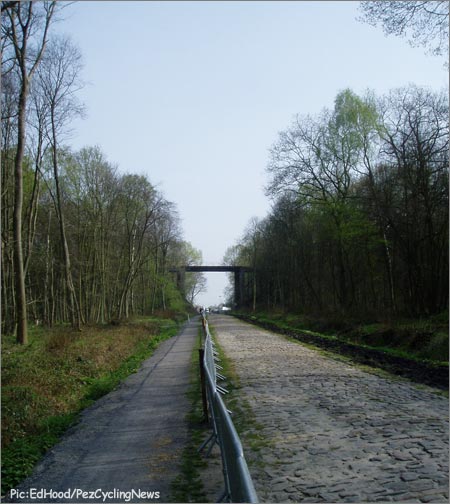 What a lovely forest path.

If you’re not mounted on 7 kilograms of carbon and alloy at 45-plus kph, it’s an idylic location, birds sing, butterflies play, the sun trickles down like honey (with thanks to Joni Mitchell) through the ancient trees – a beautiful place for a stroll and a chat. The cobbles disappear to the horizon through the trees; it could be a setting from ‘Lord of the Rings’. 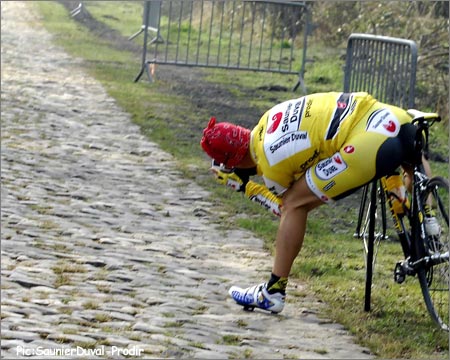 Apart from the length of the forest and the huge number of stones, the thing that strikes you is the different character of the sets, some are smooth and polished, like the cobbles we had back-home in Scotland in my youth, but they’re red, and not dark grey Aberdeen granite. 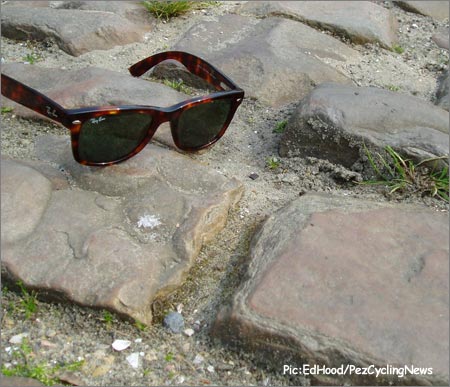 Some are still rough, sharp and uncomfortable to walk-on, despite years of polishing by feet, hoofs and wheels they are still almost as rough as they day they were split-down from some huge block with wedges, hammers, sweat and pain. Some sit level and neat, but some rows have began to tilt, like wind-blown grass, leaving even sharper edges. 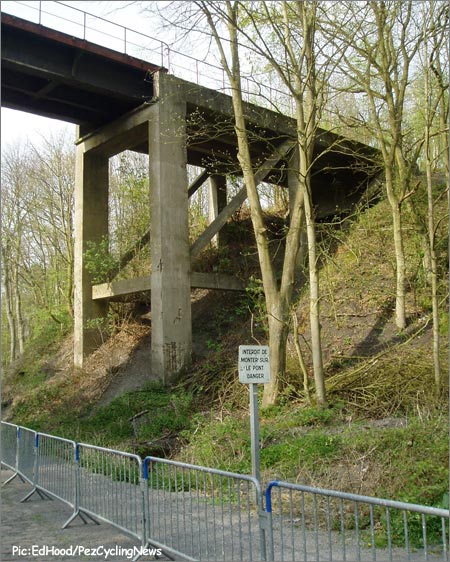 That seemingly-fragile tubulars can survive this, unscathed, says much about the skill of their manufacturers. As with many of cycling’s iconic places, the TV lenses distort reality, the cobbles initially drop very sharply from the decaying concrete bridge – which welcomes the riders under it’s span – before leveling-off half way through the 2.4 K. There’s an endless crowd-control barrier on the rider’s right, this prevents them from taking to the gravel path which runs parallel to the cobbles and stops spectators getting mown-down by desperate riders.

On the rider’s left, the grass has been ploughed-up, if it was dry and this verge was baked hard, then this would be faster, and safer, than the cobbles. By the time we leave, it’s weaved a spell on us, a special place. Back to the Audi, there’s a job to do. 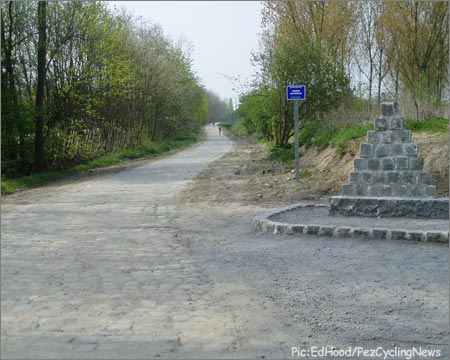 Beuvry-la-foret, at Orchies, sector 13, has just been added this year so we decided we should check it out; a lot of this section was completely re-laid, 1400 metres; ‘La Voix du Nord’ newspaper tells us the 38 tradesmen and 35 apprentices were involved. It’s reasonably regular with no bad cambers or drop-offs, it’s a tad surreal because the A23 autoroute is just yards away and the articulated trucks thunder-past, we’re at K 194. 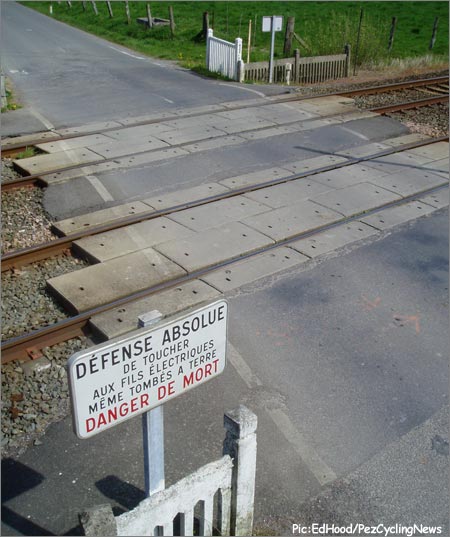 The train crossing that caused some controversy in the ’06 edition. 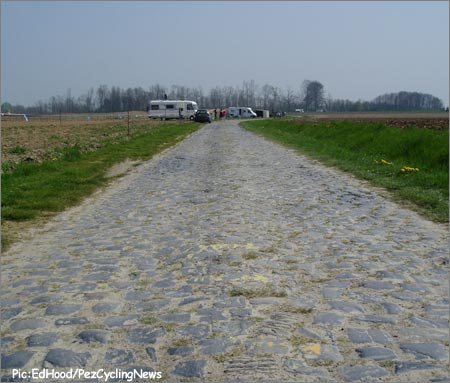 • Into the finale, sector 4 – Carrefour de l’Arbre at 242 K, I try not to beat the superlatives to death, but again it’s a legendary section of pave. It lasts for 2.1 kilometres, it’s very irregular with 90 degree bends which have horrendous cambers. 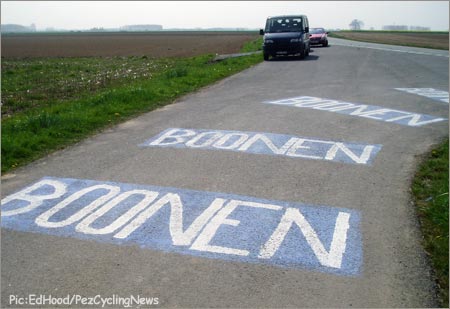 ‘Boonen’ say the tarmac artists on the way-in and ‘Boonen, Boonen, Boonen’ they say on the exit where already the camper vans gather. 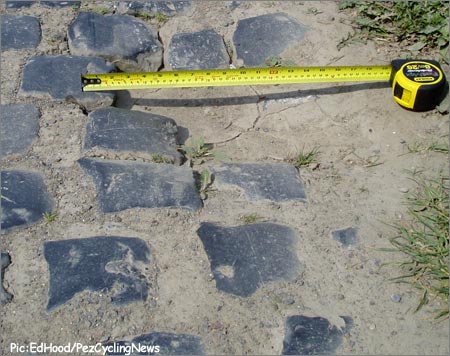 Well why wouldn’t you take a tape measure with you…? 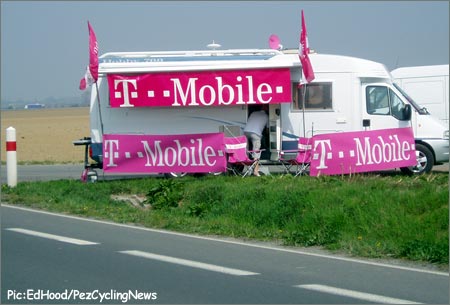 The club cyclists, pose in strength here but it takes more than they can deliver to excite the camper van fans, who ignore them. 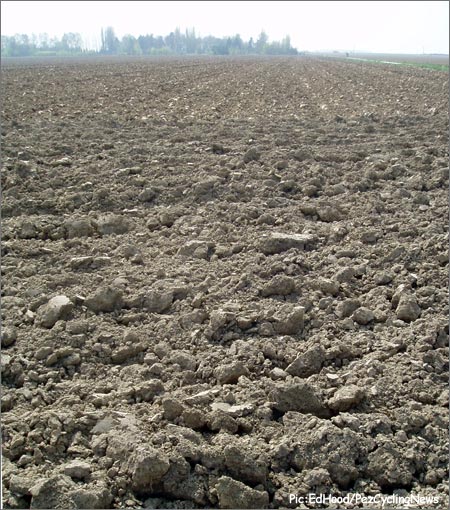 The soil is heavy with clay here, not the rich red that Ghent-Wevelgem traverses. 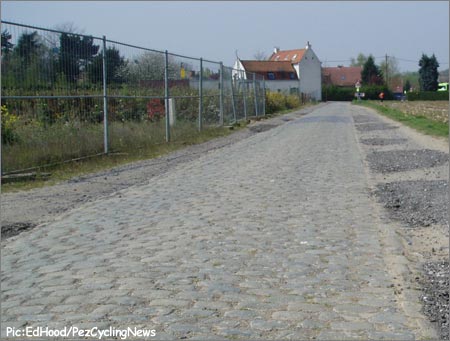 • Gruson is section 3 and 244 K have gone, it’s 1.1 K of reasonably consistent sets but with big cinder patches at the side. We met the Cannondale rep there – check-out Pez tomorrow for the ‘horses-mouth’ low-down on Pozatto and Backstedt’s hardware for Sunday. One of the ironies of ‘hell’ is that it’s actually very picturesque on a sunny day, trees, leafy lanes and quiet, red brick villages, but I guess that if Fabian’s up-front you don’t really notice the scenery. 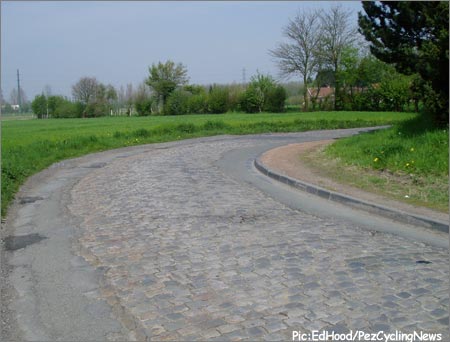 • Section 2, Hem and it’s 1.4 K of serpentine cobbles with adverse cambers and a nasty, longitudinal, ‘toothy’ kerb which contains the sets and stops them from spreading-out. 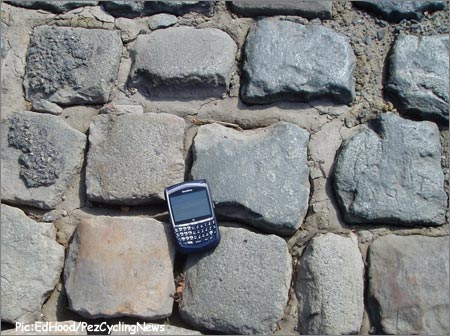 The last section, just outside the track is 300 metres, symbolic, smooth and regular down the centre of the dual carriageway, Avenue Alexander Fleming – those Scots are everywhere. 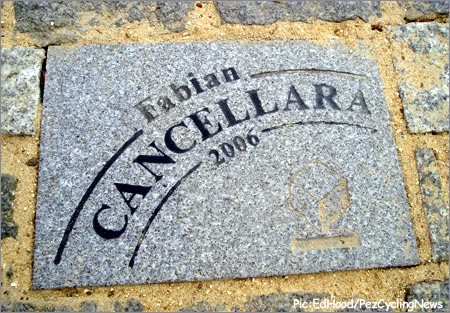 In-laid into the neat, regular sets are granite tiles with the name of every winner – Cancellara’s was just freshly laid. There’s a ‘wiggle’ into the track and you get the bell on one-and-half laps. 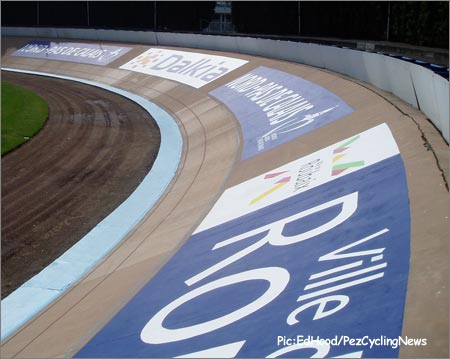 The track is a big old concrete job with bankings you can just about walk up, but they are more than steep enough to launch a race-winning sprint from, like Guesdon did back in 1997. But don’t go too early, it’s a long way around. The finish line is freshly painted – you can’t miss it; just make sure you get your wheel across it first. 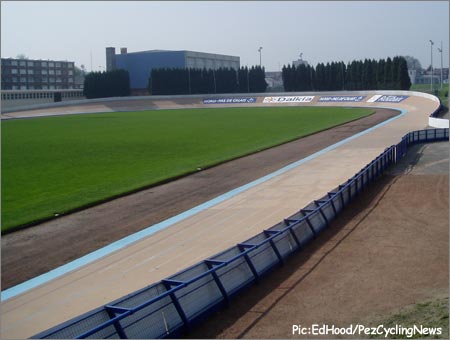 A special day, places I’ve wondered-over since I was a boy, thank you for going there with us. 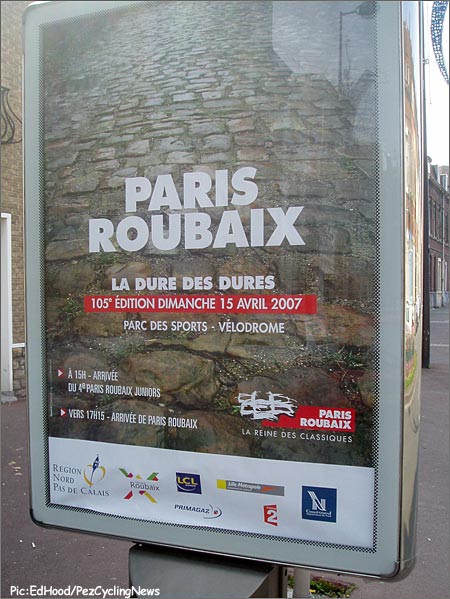 Keep it tuned to PEZ for full reports and pics from the action and see you Sunday!