The Queen of the Classics, or Hell of the North? In this week’s final chapter of our ongoing Classics focus, Steve Bauer remembers Paris-Roubaix as both… “Ah yes Paris Roubaix. A definite favorite of mine with a lot of really good memories to share. I could probably write a book… yeah maybe I could in my spare time…”

• See the 2007 Paris-Roubaix Live on Cycling.TV

When I first turned pro with La Vie Claire, I knew this was a bike race I had to excel at. I was built just perfect for it… not unlike a Henie Kuiper for example. My first opportunity came in 1985 with Lemond et al. I remember getting the handlebars all padded up the day before thinking this was the way to go….(Later to realize that the way you grip the bars is the key! not the padding). 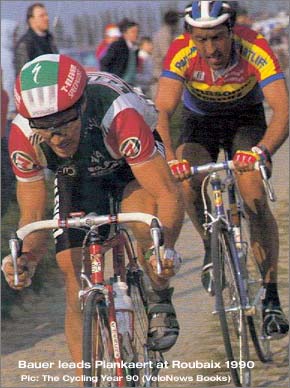 You can only ride the Roubaix cobbles one way. You have to be loose, you have to be smooth, and you have to be able to get power to the pedals all the way round through the pedal rotation. Some guys could use big gears to achieve this but I found now matter what gear you used you had to be supple, relaxed, upper body floating, hands totally loose on the bars, all the power coming from the waist down. If you could ride this way AND have good legs for the day…

My very first year of Roubaix in 85, all was going well for the crazy first battles to the cobbles and I felt like I was in the race for good until the sprint for the Forest of Arenberg. Somehow while jumping a large hole my chain and derailleur flew into the spokes and I came skidding, wheel locked, to a stop. Long wait, Bike change . Long chase and I was back in the Second peloton. Later in the race Lemond jammed his derailleur and we found ourselves chasing in together for a credible; “at least I finished in the top 30” type of feeling. A taste of Roubaix to wet my appetite!

It took me some more years of experience before my confidence and full understanding of Roubaix came together. In 1988 with the help of Serge Demierre (an veteran Swiss teamate) on Weinmann La Suisse, I began to realize I was really in the hunt to win a Paris Roubaix. That year I finished 8th, 6 of the guys in front of me had stayed in front from a long, long break. Dirk Demol won and I basically was 2nd of the rest from the main group. Encouraging for sure. That year I consistently won the battles for good position on the entrance to the cobblestones and learned how to stay in front without using up too much energy. In the 3 years as a pro I had learned every section, knew the race course inside out, studied every Roubaix edition in recent years, and knew, that this was a race I had a chance to win.

1989 brought me closer (4th) and in 1990 how can anyone forget the sprint on the Roubaix Velodrome between myself and Eddy Plankeart. 1990 was a year I rode with patience and perfection. I rode great position the entire race but saved my attack for the right moment. Eddy and about 7 or 8 others were up the road with around 30 kms to go. I was in a group of about 20 including Laurent Fignon who was attacking hard to bridge periodically. Before Cysoing Laurent strung the group out and when he let up I attacked solo. I bridged up to the lead group before the final critical sections of cobbles. On the famous, twisty section at “Le Carrefour de L’Arbe” , I gave everything I had in the attack, leaving everyone except Eddy P glued to my wheel and Van Hooydonck struggling to stay with us.

From there to the finish I tried to attack Eddy several times before the Velodrome but he wasn’t budging from my rear wheel. Into the track we were caught by Wampers (Eddy’s teamate) and two others who immediately took the front since I had climbed up the banking. Van Hooydonck attacked first and led out. In instintive track racing style I dove underneath the leading Van Hooydonck with Eddy going around the outside. Down the stretch, eyes blurry with maximum effort I sensed the line was further. I miss timed the bike throw at the line…Eddy missed it too. The Roubaix Velodrome has a very short home straight to the line realtive to the size of the track (400 meters). I think we were both sprinting as Eddy would admit too (with our eyes closed) After a long photo finish evalution, I came up number 2 by a cm.

A tough loss but a pretty cool memory. Even though I don’t have the cobblestone on the mantle, I wouldn’t trade the experience for anything.
– Steve

Steve now runs his own bike touring company. Check out his website www.SteveBauer.com for tour details.
Like PEZ? Why not subscribe to our weekly newsletter to receive updates and reminders on what's cool in road cycling?