Australia’s Stuart O’Grady (CSC) scored the biggest win of his long career on Sunday when he swept in solitary splendour onto the iconic Roubaix velodrome after 6 hours 9 minutes 7 seconds and 28 sectors of sun baked pave. It’s O’Grady’s 13th season, but his race number seven was to prove very lucky. 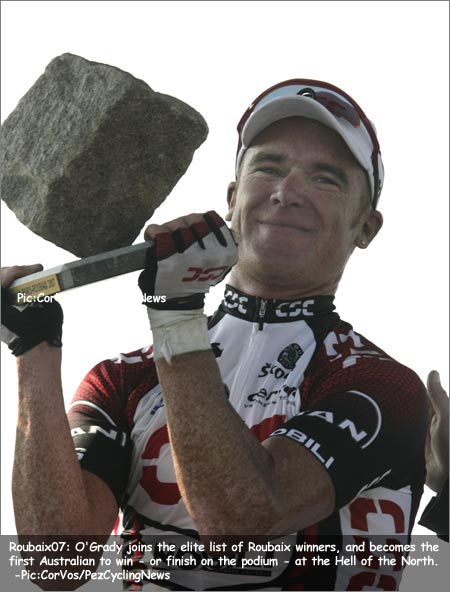 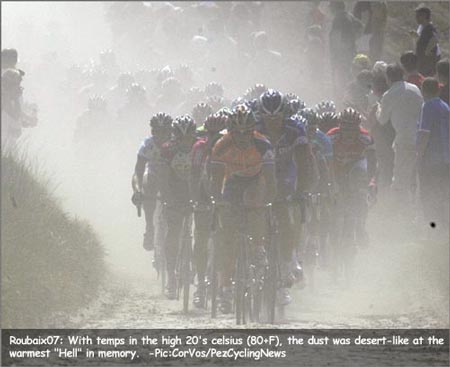 Spaniard Juan Antonio Flecha (Rabobank) came closer than ever to his childhood dream of winning the Queen of the Classics with a frantic sprint to snatch second from, ‘oldie but goody’ Steffen Wesemann; some 52 seconds behind “Stuey”. The German 2004 Flanders winner may no longer be good-enough for T-Mobile but he’s just fine for Pro Continental team, Wiesenhof for whom he delivered third place. In fourth, was Belgian, Bjorn Leukemans who couldn’t quite manage to salvage a podium place for Predictor-Lotto; Hoste was a big favouite for this race and the Belgian outfit must be very disappointed. Another ‘golden oldie’, professional since 1993, Italian, Roberto Petito (Liquigas) was sixth. 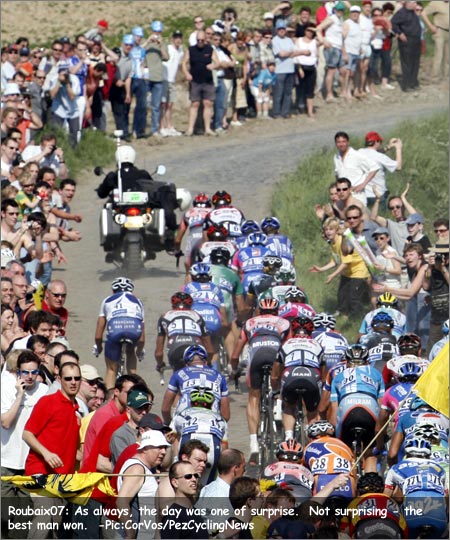 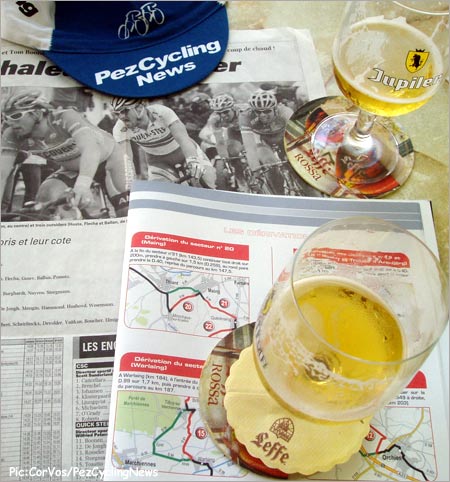 The PEZ-Crew got an early start on the day’s planned race-chase, clearing the dust with local grog. 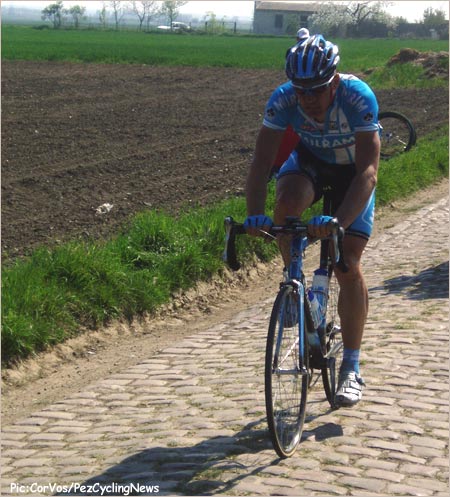 Milram’s Ralf Grabsch out on his own at the sharp end of the stick. Ralf was first into the Arenberg trench, but battling the cobbles on his own was too much and he succumbed to the chasers in Wallers. 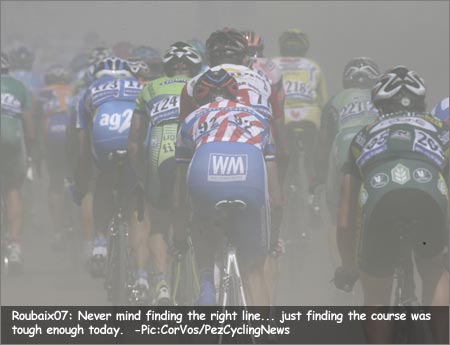 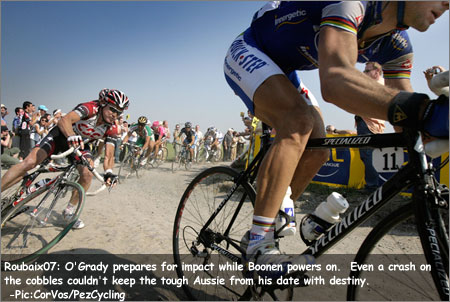 Talking of disappointed Belgians; an inspired chase by Flandrian hero, Tom Boonen (QuickStep) couldn’t hoist him onto the podium and his arch-backed kick was only for sixth. However, Boonen was the first rider to finish who had not been part of the big early break. 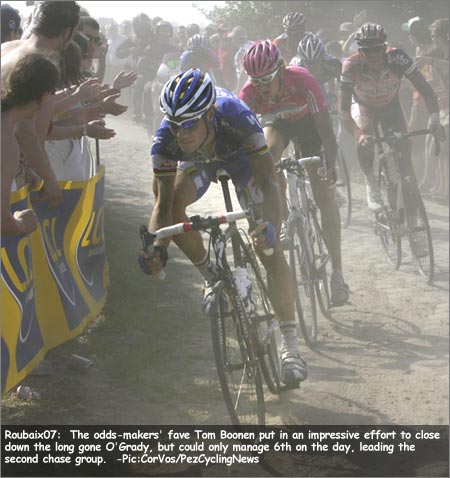 Cliches about the temperature being as ‘hot as hell’ are hard to avoid, but blue skies, a lack of wind and temperatures deep into the 20’s made for riders looking like coal miners as dust clouds billowed onto sweating faces. 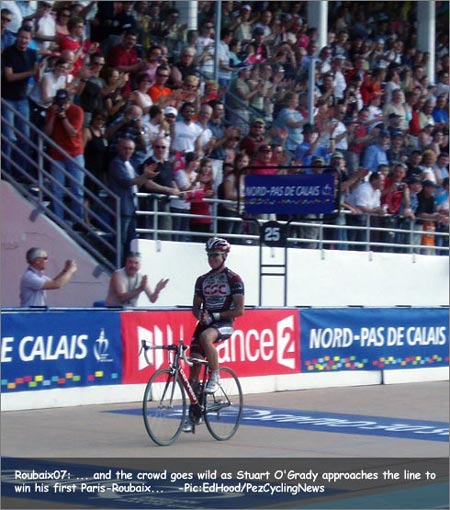 The 33 year old Olympic madison champion and multiple world team pursuit medallist’s first word at his press conference was; “relief” – at having finally landed the big road win that he had come so close to on several occasions; an HEW Classic in 2004 can’t compare with this performance. O’Grady had been in the first real break of the day when some 30 riders rode clear after around an hour of riding. This break, which normally would have been too unwieldy to survive, was the key move of the entire race. From the bunch, and ‘super-favourites’, only O’Grady would ride with this group again. 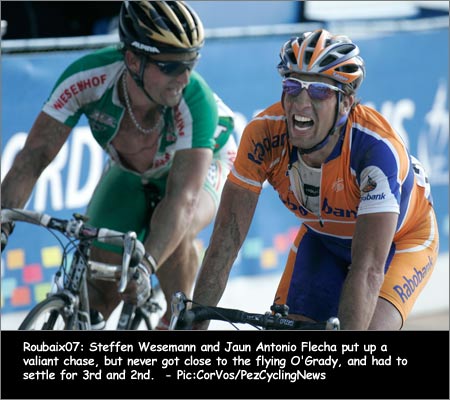 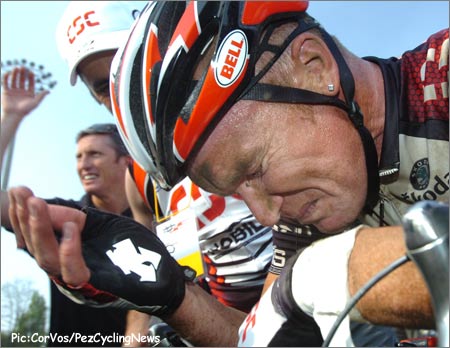 However, it looked bleak when an untimely puncture on the cobbles saw O’Grady go backwards to the main field and a crash ensured he would not finish on the same bike as he started-on. Looking-around, at the favourites, the man from Adelaide decided he was looking better than they were and he proceded to give an inspired demonstration of riding. He bridged back-up to his erstwhile companions and then went past them, the winning move coming with around half-an-hour’s racing to go. 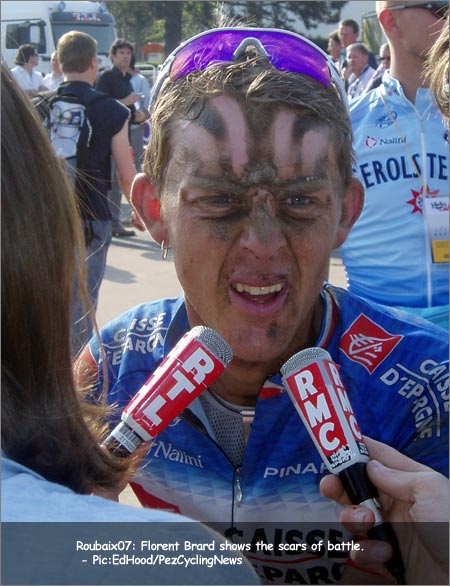 The Flecha group had been seven-strong but by the death was down to four. Behind, Boonen – with honour at stake launched himself clear of the remains of the bunch. His strong riding took him up to break survivors, Roger Hammond (T-Mobile & GB) – who gave a repeat performance of Wednesday’s ‘away all day’ ride at Ghent-Wevelgem, this time finishing seventh behind Boonen – and eighth placed cyclo-cross specialist, Enrico Franzoi (Lampre & Italy). It was Stuey’s day, but spare a thought for his team mate, Dane, Lars Michaelsen riding his last-ever race. Well on-course for a top-finish, a crash saw him sprawled on the cobbles, he got-up to finish eleventh – and cry his heart out in the team bus after the finish. 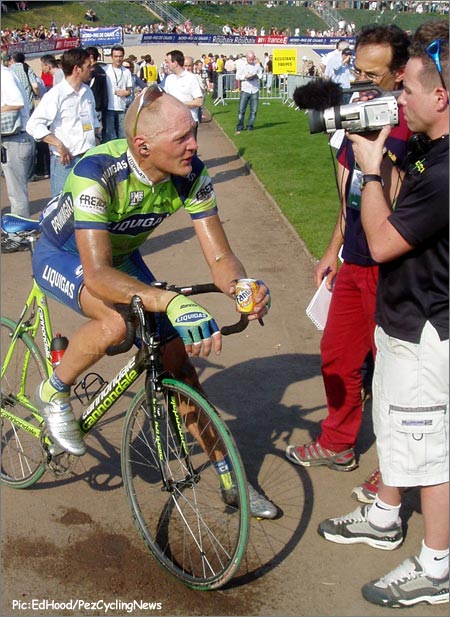 Magnus was running strong until a flat and long wheel change at 76k to go scuppered his day.

Roubaix Rides: Look At Those Bikes