The scene on via Roma was ‘normale’ for the 100th edition of Milan-San Remo – thousands of fans packed along the final km of the corsa, the tidal wave of cheers as the bunch raced towards the line – and a true ‘campione’ besting the best in the world as Oscar Friere scored his second win of La Primavera. Here is the PEZ Report… 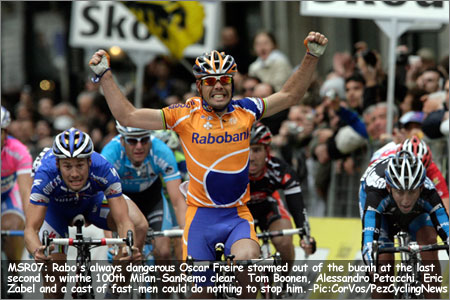 PEZ-Man Ed Hood was staked out in San Remo, at a cafй on the famed final ‘capo’ of the Poggio to be exact. This is a day long event on the Italian Riviera, so Ed was happy get underway early this morning – long before the race even left Milan. Meanwhile, our man Ale Federico was in Milan for the start before chasing the race all the way to the finish. We’ll be adding pics throughout the day so check in again. 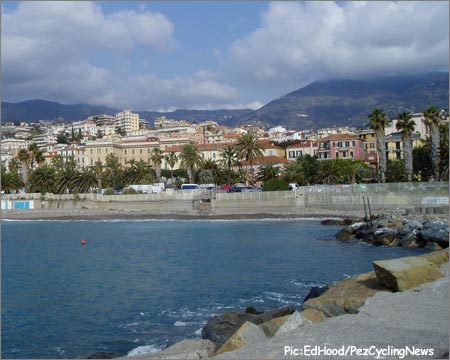 Ed picks up the action… 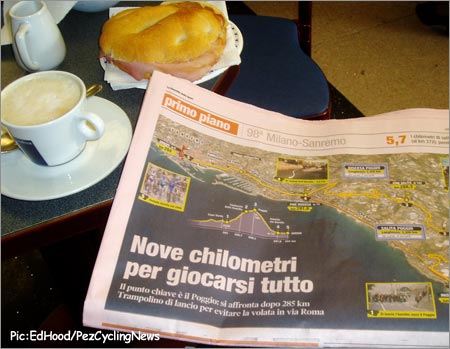 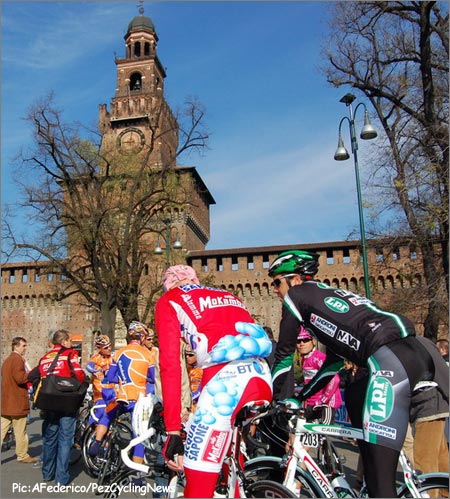 Looks like a fine day for a bike race. 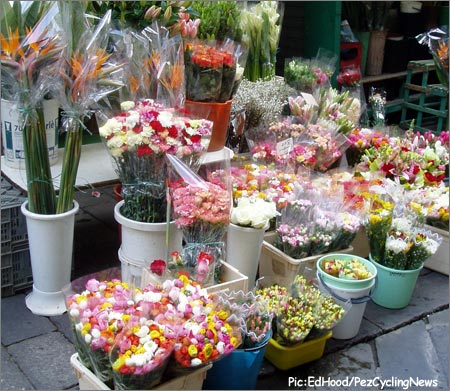 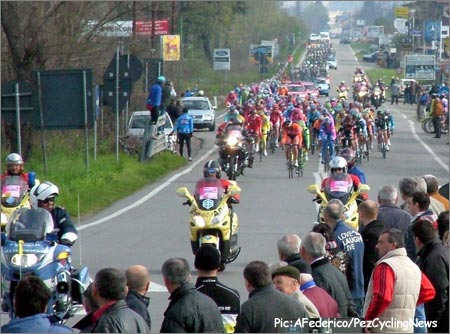 • 10.30: I ring Ale, he’s got the hard job today, chasing the race all the way from Milano to the Via Roma. It’s a leisurely start as the bunch rolls through Binasco 9km out of Milan. He’s already got action shots and is headed for the Turchino. 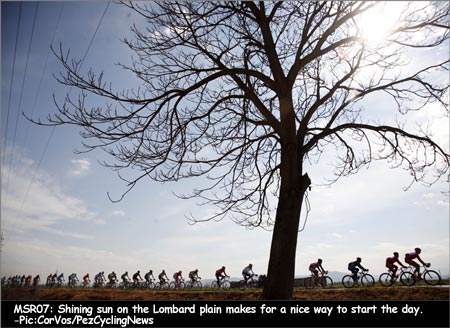 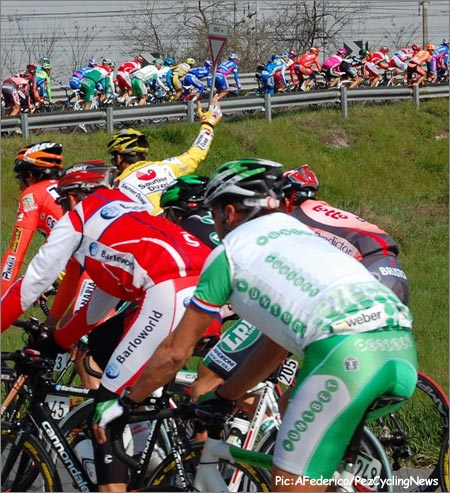 12.00: The wind has sprung-up from the east in “The Queen of the Riviera”, it’s chilly and there are spots of rain blowing through; it’s warm in this pizza restaurant though. 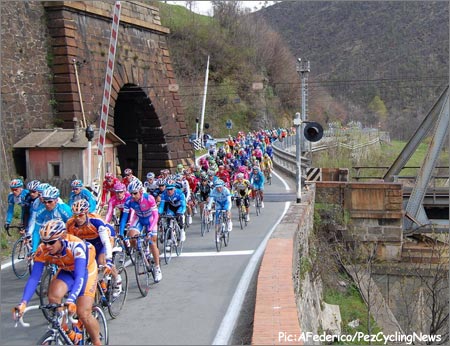 Over the Passo del Turchino, the bunch sets up to begin their workday.

12.20: Ale calls from the Turchino, a group of six or seven have five minutes. It’s a long time since a break stayed away from far-out and won; Chiappucci in ’93, I think? 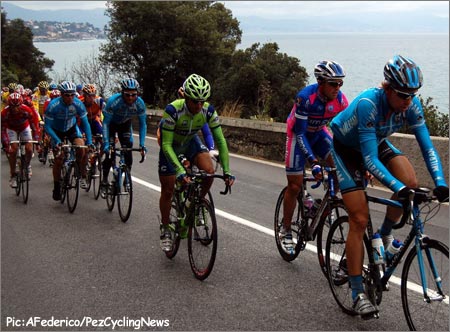 Still 100km to go, but the chase is on at Piani di Invrea.

• 13.30: We’re at the top of the Poggio, it’s cold and windy. Ale calls, the seven are still clear and Milram lead the chase: it’s a long way from San Remo to be burning-up your train though. It’s Klondyke-time in the restaurant, the food and drink is flying across the counter; it’s easier to get served if you are a policeman. 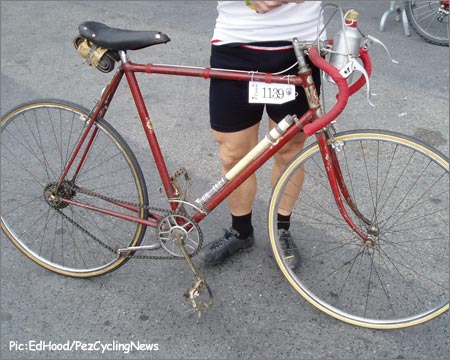 You don’t see a lot of these back home… 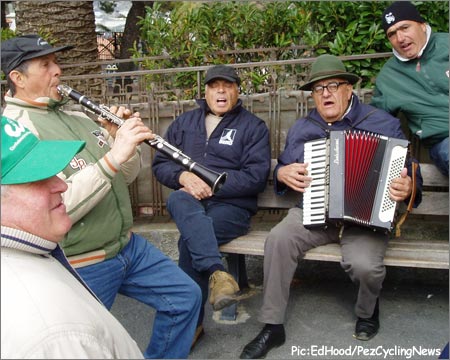 • 14.15: There’s a sing-song going on outside, complete with accordion player and there’s a vintage cycle run passing through: it’s a party atmosphere now and the grappa and wine are flowing. 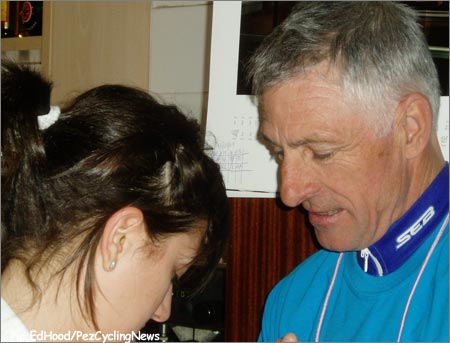 • 14.35: Francesco Moser just dropped by, he’s not as young as he was, but those girls still throw themselves at him. 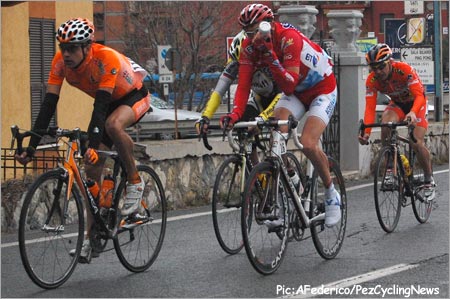 • 14.55: The TV feed comes through to a big cheer. They are on the coast road with four clear; Brutt (Tinkoff) Hernandez (Euskaltel), Kunitski (Acquasapone) and Sella (Panaria). And the crashes have started, it’s the same every year – when the road narrows in the villages. 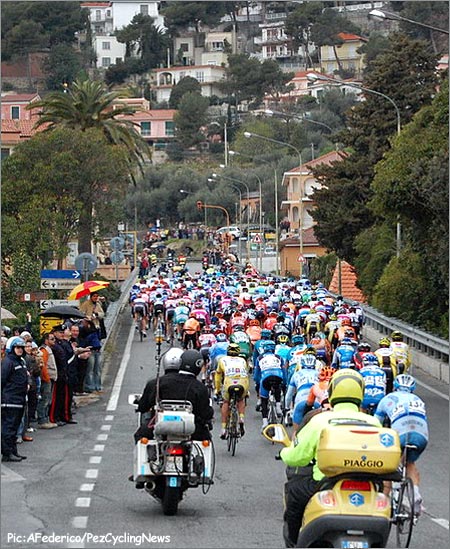 The bunch rolls onto the low slopes of the Capo Cervo.

• 15.10: A guy starts a motor bike outside, it interferes with the TV, the crowd turns nasty and the bike is switched-off, pronto! There are only three left out front, Sella has gone.

15.20: Capo Berta, Brutt drives but Liquigas and Cofidis are active behind – Nuyens? We hadn’t thought about him. The gap is still a minute plus, though. 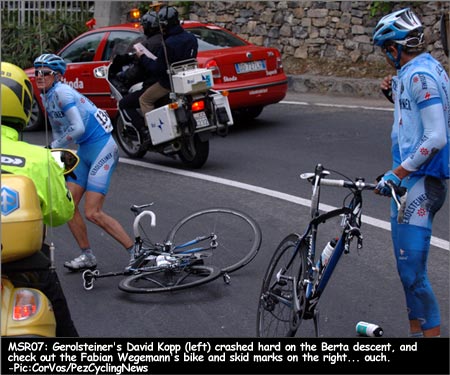 15.35: Another crash, Zanotti (Unibet) is out, Kopp (Gerolsteiner) went out in the last one.

15.40: Cipressa, Brutt explodes, Bettini moves-up and the bar goes wild. The break is history, Quinziato goes, to set things up for team mate Pozzatto, Voeckler (Bouyges) is there too, but it’s soon over. As the top nears it’s another Liquigas move – Pelizzotti then Moletta (Gerolsteiner) then Popovych (Disco) comes up. They are riding hard on the decent, too hard – Molleta goes down.

16.00: There’s the tunnel, the Poggio is close, QuickStep en masse at the front – Tom or Paolo? There’s 10 to go, there’s the right turn and it’s on the Poggio! 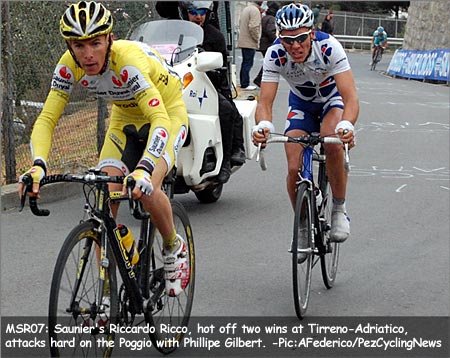 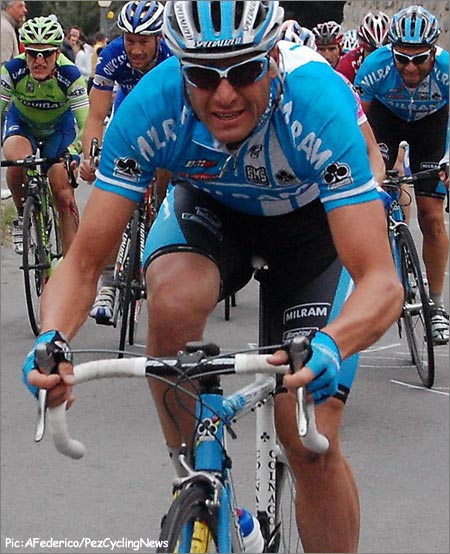 Poggio chase: You gotta be near the front at the Poggio top, and Petacchi and Boonen dig deep. 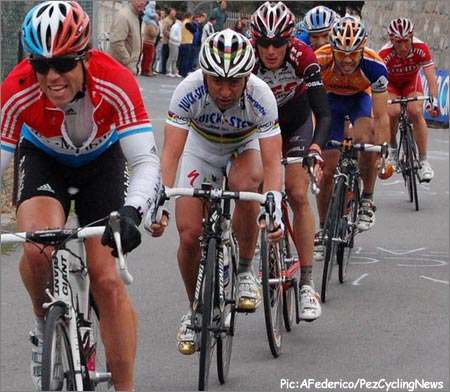 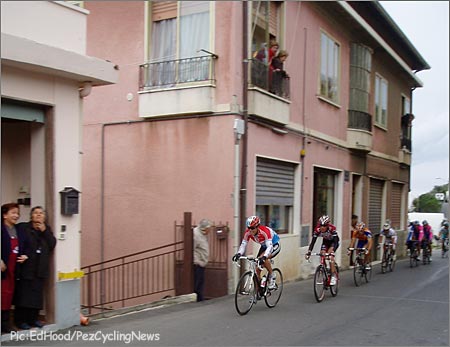 16.07: Outside, for real! Ricco (Saunier) and Gilbert (Francaise) lead over the top. Back inside – Bettini leads the charge – It’s for Tom today! Ricco and Gilbert are light guys and have to work the descent hard. Ricco does the most, Gilbert let’s him. In the streets, Gilbert hesitates, he can’t – it’s all or nothing. Milram and Lampre ride hard, Gilbert looks back – it’s over. 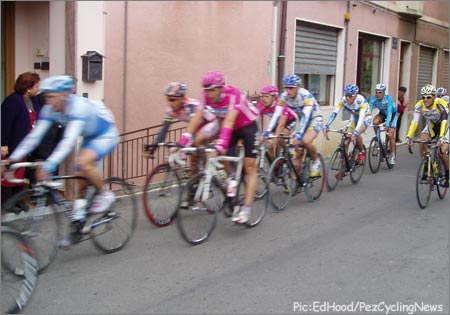 Flame rouge and it’s still Lampre and Milram but Freire is hovering. The fountain, Milram still have three, Petacchi launches but it’s the Spanish, three-time world champion who is too quick for everyone, lengths clear. Allan Davis (Disco) is second, Boonen is third – it sure has gone quiet in this bar! 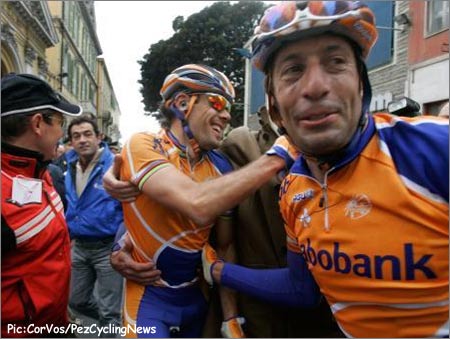 Seconds after: Jaun Antonio Flecha shares the jubilation in the Rabo camp.

SanRemo’07: The Cipressa And Poggio Up Close