With the finish this week of both Paris-Nice and Tirreno-Adriatico, the odds makers have a clearer idea of who’s running well for the top spot in this weekend’s Classics Opener – Milan-SanRemo. In recent years it’s the Italian stage race that’s sent up more winners of la Primavera. With all riders tuned up, here’s the PEZ take on who to watch for Saturday…

Why do so many winners of Milano-Sanremo come from Tirreno-Adriatico? This can be usually explained by several reasons. At least one is the weather. The Italian race route is designed in the central part of Italy which is warmer now than those cold French roads. Even if the physiological benefits may be debateable, being in a positive frame of mind from riding in nice weather will certainly have a good effect on the mind and legs. Or there’s the plausible reason: Paris-Nice is god-awful hard, whereas Tirreno-Adriatico is tough, but is run in typical Italian fashion – nice and easy, building to a nasty, tough finish, which all in all isn’t so terribly hard on the body, as compared to Paris-Nice’s penchant for wire to wire racing.

After watching the action from both races, our guess is as good as yours when it comes to predicting the arrival in SanRemo, but taking a close look at who’s going well now provides plenty of ammo for our ‘educated’ opinions for Saturday’s Primavera.

AND IN THIS CORNER… 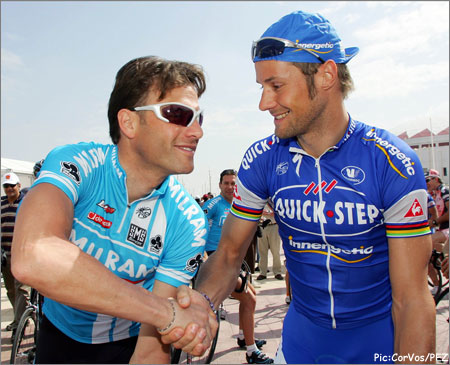 On paper, this could easily come down to a Petacchi-Boonen duel. On paper. In reality, a rider like Freire or McEwen could easily play off the two and punk em both. Or of course, there’s that breakaway possibility…but two years in a row?

Alessandro Petacchi – Our doubts are not really focused on the 2005 SanRemo winner, but on his team. Probably last year he lost the Milano Sanremo because of the difficulties of his team in the last 15 km. During this Tirreno Adriatico again Milram lost two great chances. The first one in Civitavecchia when the delays of the last men of the “train” favored a surprising Robbie McEwen, and the second one the day after, in Marsciano, when a wrong calculation of the times favored Arekeev and his solo break. Sure enough trying to control the bunch at the end of a very, very long day is a tall order indeed, but Milram hasn’t shown the superiority in this task like other Petacchi teams did… Good luck Ale-Jet. We think you might need it. 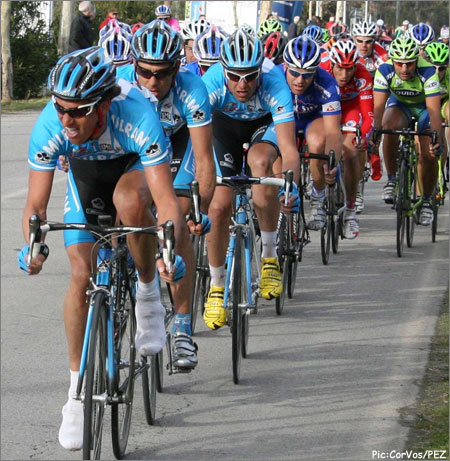 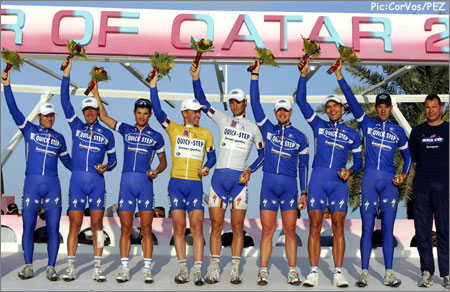 Milram and QuickStep appear to be the two teams that have the capabilities to control the race, and even that is tenuous.

Thor Hushovd – Hidden. Hidden but present. Answering our question about his intention for Sanremo he smiled and looked at us with quiet confidence. He feels ready and having never won SanRemo – his motivation will be as high as any contender. This could be Hushovd’s year. 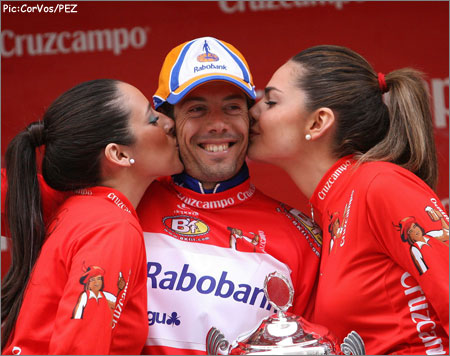 Oscar Freire – We wonder about the condition of this great champion (and 2004 MSR winner) who didn’t find the right condition at Tirreno after a nice beginning of the season. But we know very well that in the past many champions were able to hide their presence in order to elude the control of the mains in the Riviera roads. During the most difficult stage in the Appennines he tried a break without success, but he was there. Indeed – he was definitely there whenever it counted at Tirreno-Adriatico, and his growing tally of wins already this season speaks volumes. There’s a reason Oscarito is 4th on the list at 11 to 1 odds. He’s a good bet.

Robbie McEwen – Super. He won a great stage in Civitavecchia, the first one, with a great action anticipating the sprint (!) with a surprising acrobatic action in the final 400 meters. For us a clear intention for the Poggio descent. He hasn’t figured in SanRemo before, but he’s no dummy when it comes to capitalizing on good form. McEwen missed some racing over the last month though, and that lack of race time could hurt him over the course of such a long race. If he gets to the line though and the trains falter a bit, it could be the Robbie Mac show.

Erik Zabel – Right now the 4-time MSR winner he looks better than Petacchi. He fought on the climbs and looks unburdened from the role of the favourite. Watch his wheel on the Poggio. He left the Tirreno Adriatico early because he felt a light cold and preferred to avoid problems a few days from the Sanremo. In short: don’t ever count out Ete at the end of a Classic sprint. 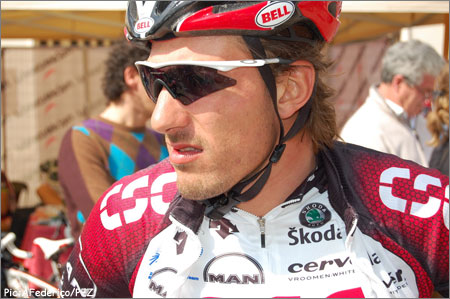 Fabian Cancellara – He really looks out of the games, but as he told us at the Tour of California, his targets are later in the season. This year he was 1:31 off the pace at the Tirreno ITT which he won last year. 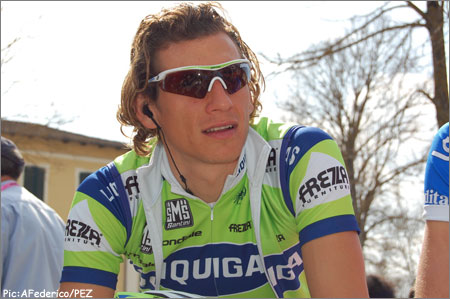 Filippo Pozzato – Last year’s MSR golden boy didn’t find the way to win a stage at Tirreno, but we’ve seen him too relaxed after the finish line. For sure he didn’t ask too much from his body in these days. Still, he is really one of the favourites of the Sanremo. We expect from him something great, but he’ll need the cards to fall his way. 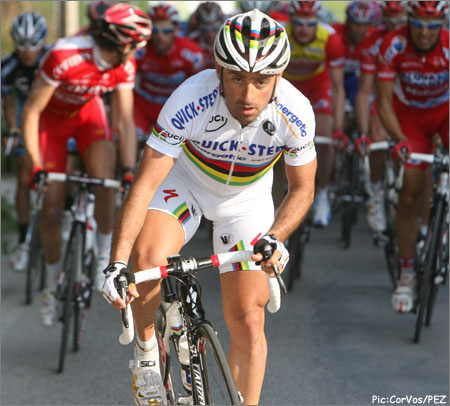 Bettini has had a helluva lead-up to MSR, but he’s still a big time danger man.

Paolo Bettini – His Tirreno training was a bust with two bad crashes in two days. And this morning we received this dispatch frm Quickstep:

Press Release – This morning Paolo Bettini had to suspend his training due to the pain he was in. This returning pain is a direct consequence of a fall during the 4th stage of the Tirreno-Adriatico race. The World Champion visited a specialist medical centre at Parma this afternoon and underwent an ultra sound and x-rays that highlighted a fracture of his 4th left rib and a lesion of his left pectoral greater muscle.

“I’d like to underline that it is my intention to take part in the Milano Sanremo race – Paolo Bettini said – this will be my 10th participation in a row and I really want to be there to honour the race that sees the 100th edition this year, my fans and my jersey. With my present condition I really can’t say whether I’ll be competitive or not. As so often happens, kilometre after kilometre it will be the sensations I have that will decide what role I’ll be able to have in the race”.

Stefan Schumacher – Great in the ITT. He his ready to win a great Classic, and his team seemed strong at Tireno – so is it advantage? He’s still young in terms of Classics, and how will the Gerolsteiner play on Saturday? Many times nobody want attack first. 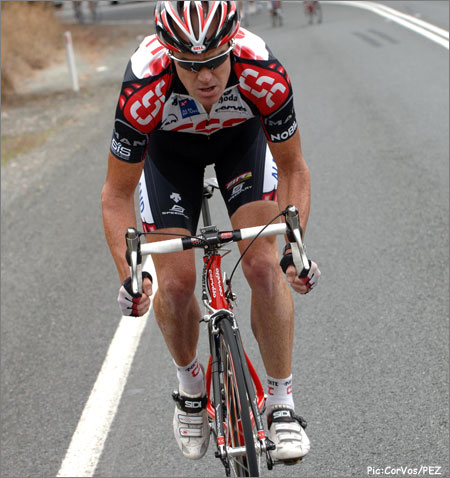 We’d be remiss to neglect mentioning Stuart O’Grady. He’s going really well right now, and even if he’s not a pure sprinter, a sprint after 300km is not exactly a Grand Tour sprint – just ask Alessandro Petacchi.

Thomas Dekker – Last year’s Tirreno winner demonstrated that he was not just a surprise. The guy has got the right numbers to hope, one day, to look for a race like the Sanremo. But this year looks too early.

Andreas Kloeden & Alexandre Vinokourov – Both are taking a well-deserved break after Tirreno, and we’d venture they’ll be focusing on the Ardennes Cassics. 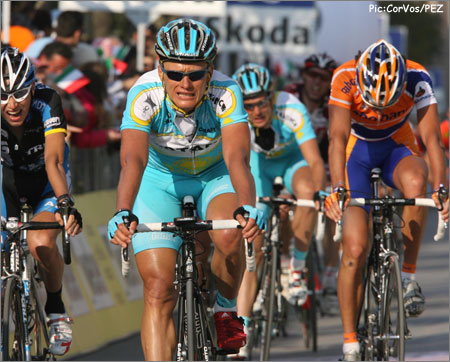 Alessandro Ballan – Don’t wait for him this year. Too many problems before the “Race Between Two Seas”.

Kim Kirchen – Be aware. He doesn’t joke. And he will show that. He was second (by 4 seconds) at the end but very dangerous during all the stages. He’s on great form right now, but like any and all of the ‘attackers’ he’ll need some good fortune and the right group to stay away to the line. 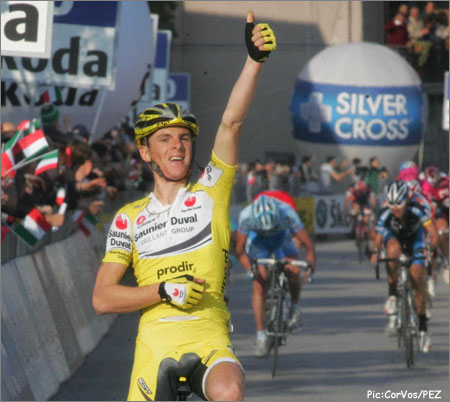 Riccardo Ricco has to be the popular choice at the moment. He probably won’t win, but still…

Riccardo Riccт – Who’s that? Another young Italian ready to be part of the big leagues? Probably. But Saturday looks too early. Too long for Riccт the Classicissima? Probably. But we will have a look for him. After winning his second stage in two days with an attack in the last two kilometres, he declared that he’s not afraid to take risks and has thw form right now to make it work. And we’ve seen that stratagey pay off on via Roma.

Anyone else? This edition of Tirreno has shown a small revolution at the head of the bunch. One stage for Arekeev. Two for Riccт. One for Bono and one for Hernandez. Just McEwen and Schumacher were able, to respect their role (well, then there was the overall GC with Kloeden, Kirchen, and Vino). It’s been a warm week except for the last two days and the route was always difficult. The final climb in Monti della Laga was really hard. We cannot say that this race has given a strong indication. Just some flashes. The brightest was Riccт: just 23 years old, quiet, ready to be discovered.

What About Paris-Nice?
Even with more recent winners of Milano-Sanremo coming from Tirreno-Adriatico, there’s just something about that race, there are always some big names going crazy over in France, this year was no exception. 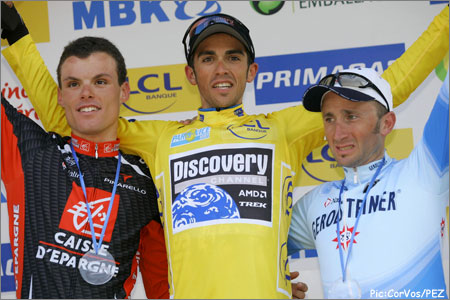 These three are all possibilities, but only under the right circumstances…read: negative on the bunch sprint.

Alberto Contador took the overall – he’s got some explosive capabilities in the upward direction, adding yet another arrow in the quiver of the attacking riders. Actually, virtually the entire top 10 of Paris-Nice is a threat on the Poggio, but chance-less in a sprint on the Via Roma: Rebellin, Sanchez, Pellizotti, Evans, Schleck, Sammy Sanchez, etc etc. There are hordes of feisty climbers, and if the sprinters teams can’t quite keep things in check, there could be one hellacious ascent of the Poggio in store for this weekend.

Others
There are a few other riders that have escaped mention here that could all be possibilities: 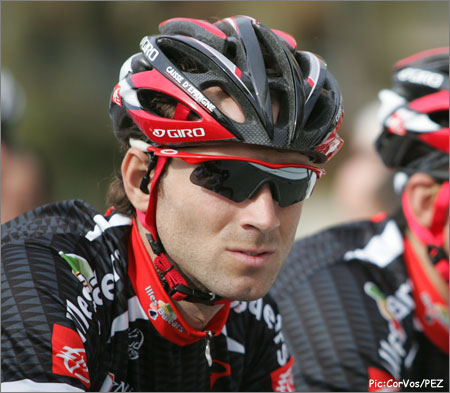 You’d be foolish to ever bet against Valverde. Even if it came down to a sprint, he has modest possibilities, and woe to a break that takes him to the line. 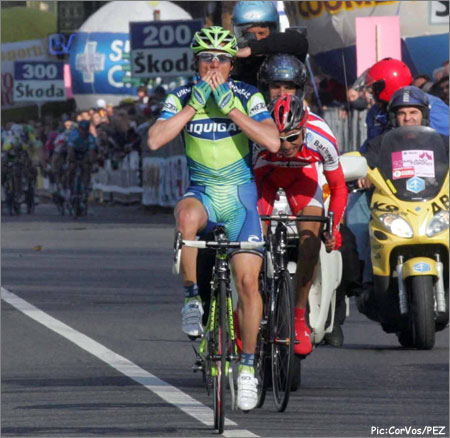 DiLuca already has a win at Milano-Torino in 2007. He’s Italian. You can bet your car that he would sell a limb for a win on the Via Roma. Well, apparently he’s going to have to wait till next year, as The Killer is down and out with a bout of the flu – he won’t be starting. 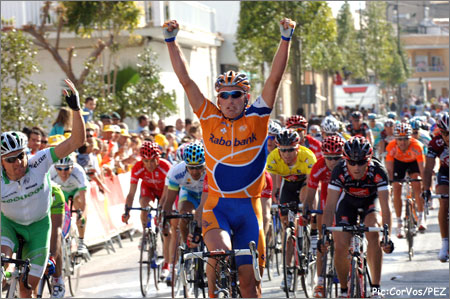 Rabobank has quite the contingent available for Milano-Sanremo: chiefly Oscarito, but Graeme Brown is rather handy in a sprint…and then there’s that Flecha guy too. And don’t forget yesterday’s Nokere Koerske winner Leon Van Bon – he’s on a plane to Milan today and feeling mighty good… 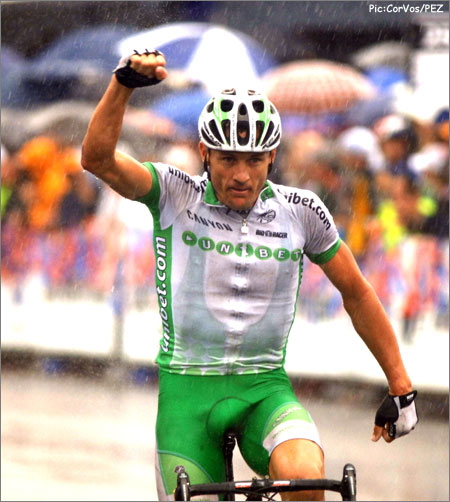 Wouldn’t that be a popular win, it would be the ultimate middle finger to all the Grand Tour organizers if Baden Cooke wins for Unibet this weekend. 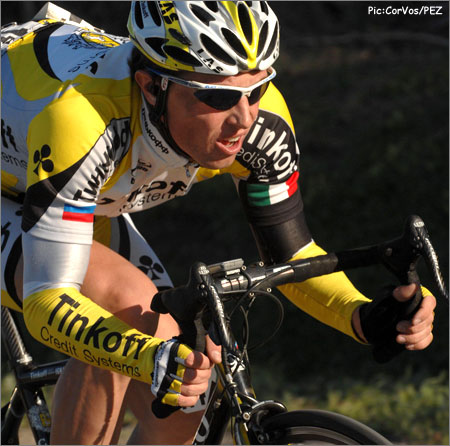 Mikhail Ignatiev is one of the most explosive riders in the bunch at the moment, and if he gets a few seconds, it’ll take some serious horsepower to bring him back.

Unibet Odds
The Unibet team might be under attack from the biking ‘authorities,’ but as an oddsmaker, they’re the best, so let’s look at what Unibet.com has to say about this weekend:

Stay tuned to PEZ for all the action and reporting only we can sniff up!
“- scuza – barkeep! – due altre capuccini per favore!”