Now the riders are in their hotels. It’s a nice evening in Milan and I’m one of the last in the big press room organized by the RCS organization in the cellars of the Castello Sforzesco. An old fortification located in the downtown that is coming back to its orginal richness thanks to the efforts of the City that never forgot about it. The official presentation for tomorrow’s ‘Primavera’ is done, and here’s how it looked…

Tomorrow will take place again one of the oldest races of the International Calendar. The Primavera, the Classicissima, the Spring World Championship as it’s called here in Italy. This year it looks almost impossible predict the winner. In the last years there was always a favourite – usually a sprinter with a great form. Not today. 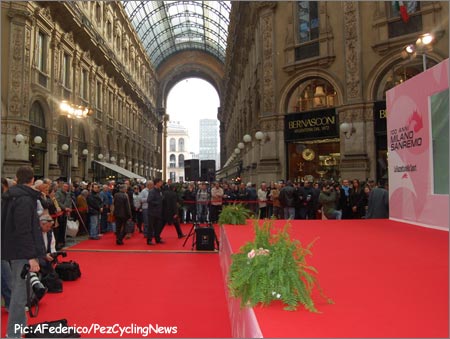 Inside the grand galleria just across from Milan’s famous Duomo, the team presentations got underway.

The route doesn’t favor attacks and most of the teams are equipped with one or more sprinters but usually this race never develops as you imagine because of that last 25 km which are nervous and full of dangerous descents. Today we checked the pulse of the protagonists and brief the smell of La Primavera. 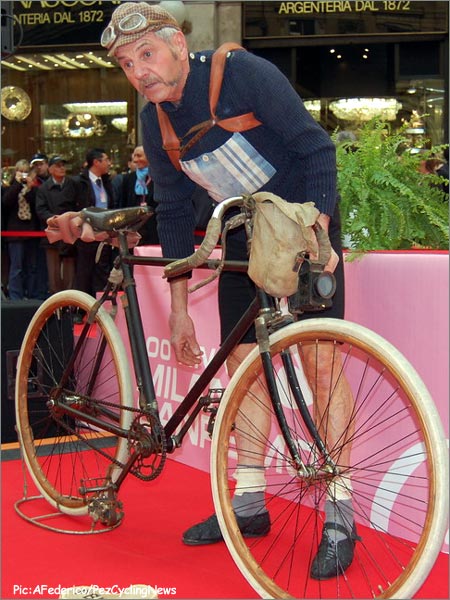 It’s simple to see why MSR was even tougher in the old days. 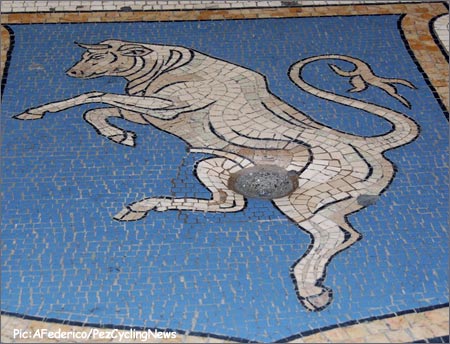 The evidence is clear – whether people believe in good luck or not, they certainly do enjoy stepping and spinning on the bull’s privates – you could sink an 8-ball in that divot.

The presentation of the Teams was organized in the Galleria Umberto I just a few meters from the famous Duomo; exactly in that point where all the Milanesi come to stamp on the bull’s balls (that’s what they call it!) for good luck. 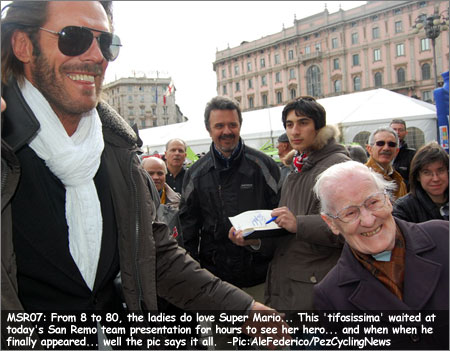 The afternoon was sweet, exactly what you expect from a spring day in Italy. There were many people waiting for the riders, but the juvenile disagreement between the RCS, teams, and UCI kept many riders away (remember Lomardia?). The people at the side of the road don’t understand. We don’t understand. And the whole of cycling, again loses a good opportunity to show itself on a great stage. Because when the cycling has something to show the people answer and answer loud! One demonstration? We’ve seen with our eyes an ancient woman waiting more then half an hour for Cipollini and once she received the sign from him we saw her giggling like a school girl…

But the wars will leave and the Sanremo remains. She survived to two World Wars that were much worst than this quarrel which looks like more a business matter. Far from the road, far from the people, far from us that now are leaving this castle looking for our hotel. It will be, as usual before this race, hard to find a reason for sleep. Tomorrow it will be another day for the story. A long story for all the people who like a dream. 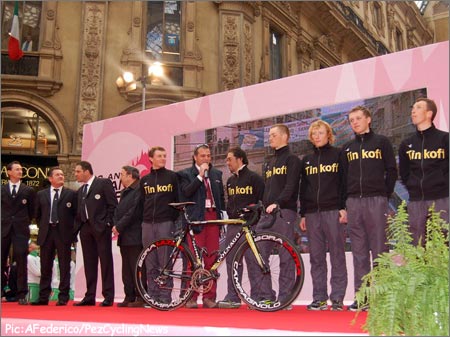 Team Tinkoff scored a wild card invite and should be expected to stir things up tomorrow.

After the presentation we talked to several riders about tomorrow… 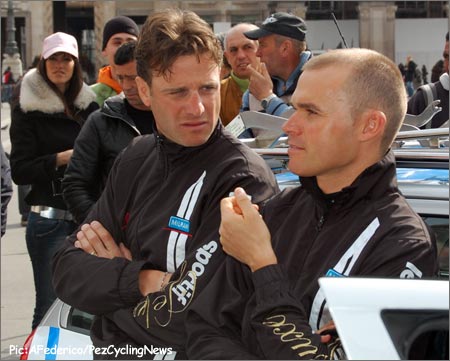 • Mirko Celestino – I’m riding quite well. I feel this race in a very particular way because I’m Ligurian. But I am in the same team of Petacchi (also Petacchi is from Liguria – the region where is located Sanremo) and I have to work for him. My role will be that one to control the attacks starting from the beginning of the Riviera. 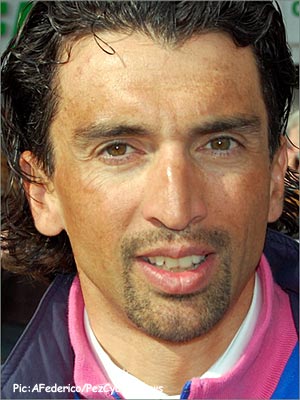 • Fabio Baldato (Lampre) – I’m one of the oldest. Tomorrow will be the eleventh of my career. I know very well this race because I was second in 2000 and for many years I took part as favourite. Now my role is different. I will care about Bennati and Napolitano. I expect a nervous race and now is very difficult to guess what can happen during the race. In any case I’m very confident for tomorrow because in my career I never won a great Classic but many of my team mates did it while I was in the Team. The last one was Petacchi in the 2005. 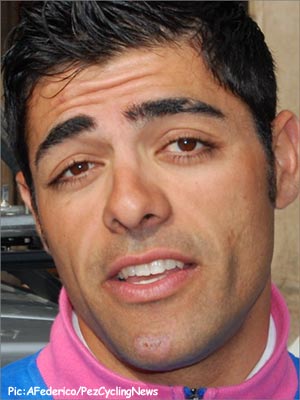 • Danilo Napolitano – I hope in the nice weather. I’m riding well. In our Team there’s also Bennati, very strong at the sprint and stronger than me on the hills. We will ride as usual one for the other. 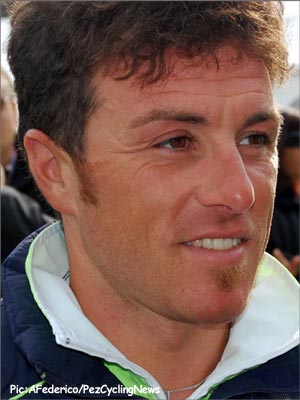 • Luca Paolini – My team is really very strong. There’s Pozzato, there is Gasparotto (great moment of form for him). But there’s also me. I always make a good result in Sanremo. 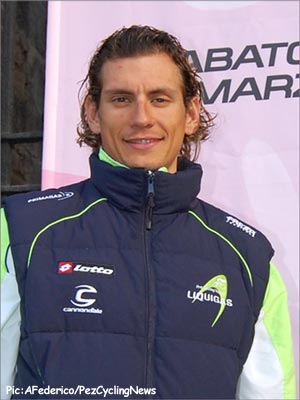 • Filippo Pozzato – The Sanremo is unpredictable. I won it last year in a so strange way… My favourites. I feel in very good conditions. But Boonen is dangerous and Bettini too. Freire? I don’t see him riding as he expected. I spoke with him in the last days and he confirmed it to me. Riccт? He said he will attack. Ok. We are waiting for it, I really want to see his attack. This means that he will help us in our job because we also want avoid the final sprint. I love very much this race and I will try to win it again. The Teams presentation was a very good opportunity for cycling to show the top of itself. I don’t understand the war between the organizers and the UCI. We, as riders, cannot do nothing more that follow our Team’s recommendations.

• Sr. Zomegnan (Giro Director) – Today won all the Teams and the protagonists who were with us in the Galleria; they were much more than not the other who unattended the event. This race has got one century and this deserves respect. 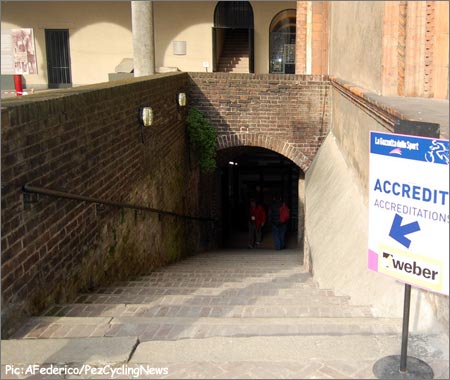 At least our press dungeon is actually in a dungeon.

SanRemo’07: The Cipressa And Poggio Up Close