It’s Fleche-Wallonne, three guys, all from the same team, break-away on the second ascent of the Mur de Huy, ride a team time trial over 70 kilometres to the finish and fill the first three places at the top of the aforementioned ‘wall’.If this sounds like an unlikely set of circumstances or perhaps a Hollywood film script then read-on.

Catch the race live on Cycling.TV in North America.

It’s 1994 and one team is above all others in professional cycling – Italian gruppo, Gewiss-Ballan. Treviso man, Giorgio Furlan has already won Tirreno-Adriatico, Milan – San Remo plus the Criterium International and Russian pursuiter turned road-star, Evgeni Berzin has won Liege-Bastogne-Liege. The real icing on the cake is still to come, however.

The course for the Fleche was similar to the current parcours with the focal point the murderous Mur de Huy, which had to be breasted three times during the 205 kilometres. The field contained all the strong-men of the day – Lance, Davide Rebellin (yeah, the same one), Claudio Chiappucchi, Franco Ballerini, Davide Cassani and Gerard Rue to name but half-a-dozen, so it wasn’t going to be a case of a soft win from a weak field.

A break of ten went early in the race and rode to a maximum of six minutes lead, but by the time the race encountered the Mur for the second time only three survived. 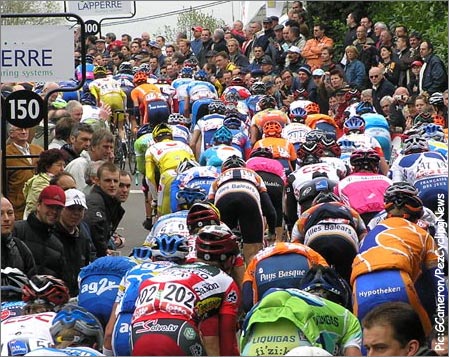 On the climb, Gewiss had four at the front – Furlan, Berzin, Bruno Cenghialta (Italy) and Venetian, Ardennes classic legend, Moreno Argentin. At this stage of his career, Argentin had a world title, four Liege-Bastogne-Lieges, two Fleche-Wallonnes plus the Tours of Flanders and Lombardy to his credit.

Over the top of the climb, Cenghialta had let a gap open but his three team mates had snapped-up the three breakaway survivors and were clear. Furlan recalls saying to his team leader, Argentin; “we’re alone, what will we do?”

Over the third and final loop, the three rode a team time trial which only finished when Argentin raised his arms at the top of the Mur for the third time to make it seven wins in the Ardennes classics, with Furlan just behind and Berzin slipping-back a little on the climb to finish third at 14 seconds after having given his all in the move.

It was 1-14 before double world road champion; Gianni Bugno (Italy & Polti) took the sprint for fourth place. Lance, back then a very square-shouldered world champion, said; “they just demoralised everyone”

Even naпve Scottish cyclists watching this rout in southern Belgium on Eurosport were thinking: “this is too good to be true.”

Sure-enough, the headlines weren’t long in coming; ‘Gewiss sideline Ferrari’, the sound-bite from the good doctor – who was retained by Gewiss – that did it, was; “EPO is not dangerous, and that with regard to doping, anything that is not outlawed is consequently permitted.”

Argentin’s long and illustrious career ended that year. Berzin went on to win the 1994 Giro, but cycling history bible, ‘Gotha’ sums-up his career best; ‘Disappeared as fast from the international scene as he appeared on it’ – quite.

For Furlan, 1994 was brilliant, but it was as good as it got for Giorgio, the ‘Gotha’ view is; ‘he became the talk of the town due to the doping affair surrounding the Italian doctor Ferrari.’ But what happened to Ferrari? Professor Conconi was appointed to investigate organised EPO use – but only until the cops knocked on his door too!

The recent T-Mobile and Gerolsteiner one-twos at Wevelgem and Amstel have been cool, but please – no 1-2-3’s at Fleche this year, that would be just too good to be true.