Eight days of racing ended in Long Beach on Sunday, and it gives us a chance to award our own “best of” trophies to the riders and personalities that made the final day so memorable. Hollywood has the Oscars…and the Tour of California now has the Pezzers.

It was all over but the shouting in SoCal. Discovery’s Levi Leipheimer had a near-lock on the GC, so the only real drama of the day was watching the race to see who’d pull out the stage win. OK, that wasn’t the only drama. You’re probably wondering who will win the coveted Pezzers, soon to be cycling’s most coveted (albeit entirely subjective) award.

• This one has to go to Levi. He lead the TofC from wire-to-wire, taking on all challengers and deftly avoiding disaster along the way. Winning his first race with Discovery puts Levi on top of the world…for now. 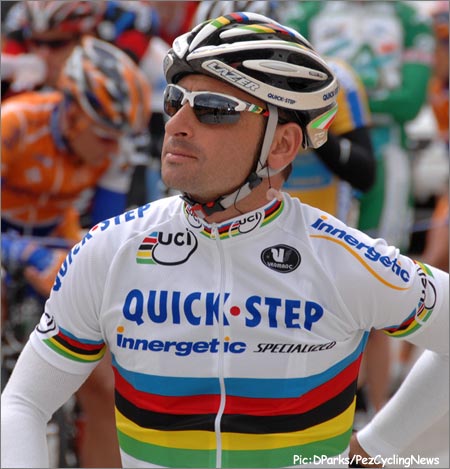 • Gotta give this one to Paolo Bettini. The all-white jersey and shorts with the world champ rainbow stripes is just beyond cool. Only one guy can wear this, and Paolo pulls it off with the flair of a man twice his size. 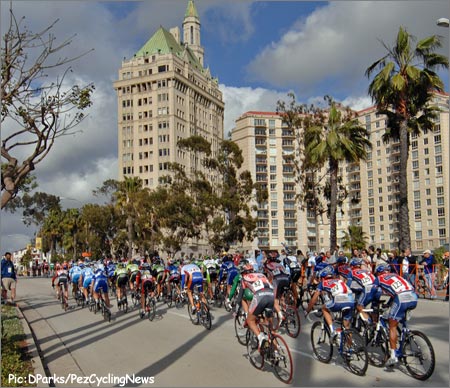 • Bettini told me that riding in the Tour of California reminded him of cycling near his Italian home in Tuscany. “Toscana, yeah. I live in Toscana, and this is very good. California is very good.” This pic may not show the obvious, but it was pretty unanimous in the bunch that racing in California is good stuff.

• After getting countless, “What were you guys thinking?” questions all week, the Slipstream squad’s Will Frischkorn decided to clear the confusion and embrace their argyle outfits on Sunday. It’s a philosophy we’re familiar with here at PEZ – after debuting our “love ‘em or hate ‘em” striped leg and knee warmers, we know if you don’t believe in yourself (and your kit), why should anyone else believe in you?

Membership Has Its Privileges

• How’s this for a “murderer’s row” of international cycling…Ivan Basso, Paolo Bettini, Thor Hushovd and Fabian Cancellara, all racing on American roads. Attracting these guys has put the TofC into the big-time, and sends a pretty strong signal that this American race will soon be part of the UCI’s top tier club.

Best Breakaway of the Day 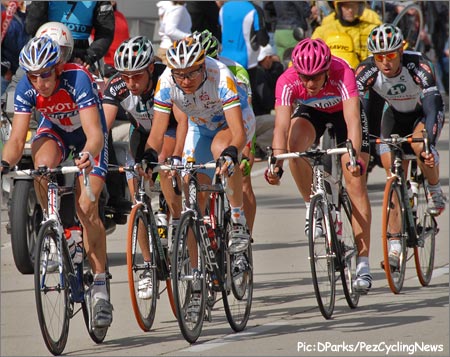 Seven riders tried to steal the race on Sunday, including Slipstream’s Steven Cozza and Danny Pate, along with Ben Jacques-Mayne of Priority Health. They opened up a three minute lead on the peleton, but they couldn’t hold it. 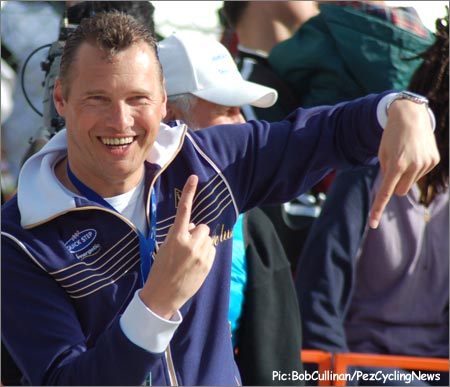 • Quick Step director sportif Wilfried Peeters signals everyone that the gap is closing, and the pack is about to swallow-up the break. He’s a guy who really cares about his squad and how they’re perceived by the public – . In fact after we published a few shots of his boys relaxing at the pre-Tour gala, he asked us to put the cameras away since he didn’t want anyone to think they were just here to party. Gee, I guess Bettini’s constant presence at the sprint finishes and ‘only’ 1 stage win was the result of too much partying?

Catch Of The Day 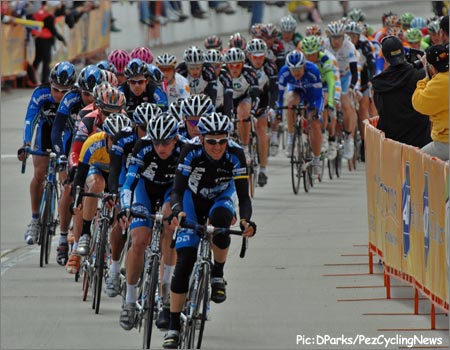 • The Disco boys pulled like a fright train all week, and lead the peleton back to the break on Sunday. How cool is it to have Giro d’Italia champ Ivan Basso leading the charge for Levi?

• Toyota United’s Ivan Dominguez powered to the stage win, just edging out Rabobank’s Graeme Brown and T-Mobile’s Gerald Ciolek at the line. Dominguez blew by the big boys after a great lead-out by Henk Vogels.

• OK, we admit it… we have a soft spot for Jana Ireton, the Specialized Angel… who doesn’t? Poor Jana was a bit chilled for much of the race on Sunday, but she managed to blow a few kisses our way. 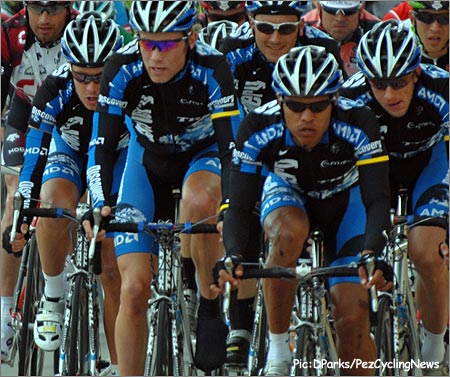 • Levi brought Tony Cruz up to the stage so he could tell everyone how much Tony sacrificed himself for the team. Tony’s a Long Beach native, so this day was super special for him. “For me, it’s like having the Tour de France in my home town. There’s nothing better. Cycling is in my heart and in it’s in my blood. And when I can compete at home, in a race of this caliber, it’s a dream.” 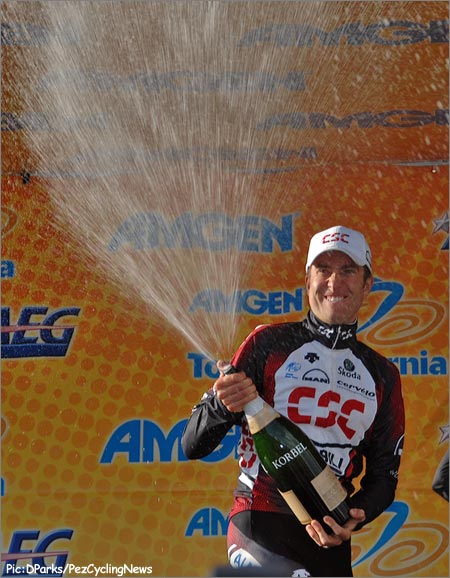 • CSC’s Christian Vande Velde celebrated his team’s championship with a masterful bath of bubbly for everyone near the podium. Now that’s a spray.

• It seems the only thing Levi couldn’t do all week was open his victory bottle. He tried so hard that he even drew blood on his hand. But hey – it’s the color of the jersey that counts.

• You know you’ve arrived when fans like this appear. 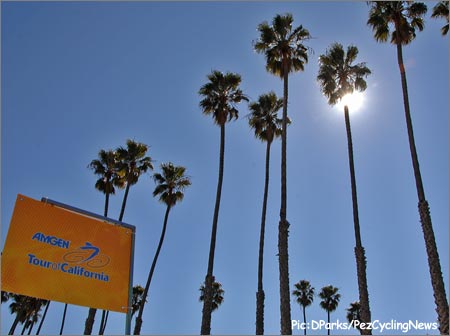 • In case you hadn’t noticed, we presented some darn fine images from California all week long, thanks in whole to our photogs Darrell Parks and Cor Vos. See ‘em online at:
• DarrellParks.com
• CorVosPro.com

Thanks to everyone for reading and following the race with PEZ. And thanks also too all the fans who said hello on the roads of California – as much as we love reader emails, nothing beats a shout out from a real live fan. If this is any indication, the season is off to a great start, and there’s plenty of racing action ahead as we look to Het Volk and the start of Classics season this weekend. … Next stop – Belgium!