There’s just something about Jens Voigt that appeals to race fans everywhere – he races hard (really hard), and he’s tough (really tough), and he’s aggressive (really aggressive). Once again, Voigt’s appetite for bike racin was in full effect. Enough superlatives, it was a fine day of racing – Voigt took the win, Levi is still in the lead.

What an epic day of racing! The first attacks started as soon as we left town in Stockton this morning, meaning it was no problem to drop in close to do live updates from the get-go. The technical kinks on the ATOC webcast are starting to get worked out, so our live moto commentary can get used more, which was good for motivation today. With so much racing action, we did updates almost every ten minutes. No time even for an espresso stop! 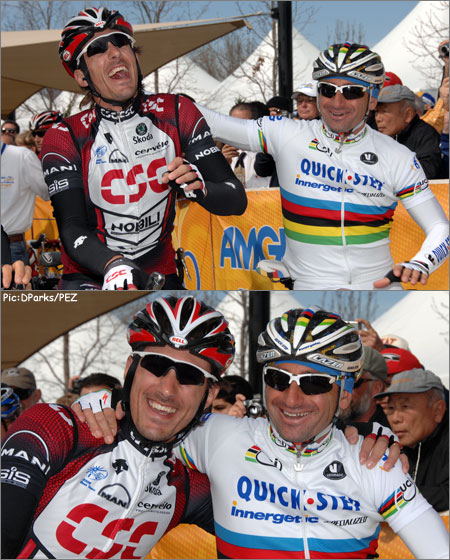 The starting area was anything but somber this morning, as Fabian Cancellara and Paolo Bettini lapped up that California feelin. 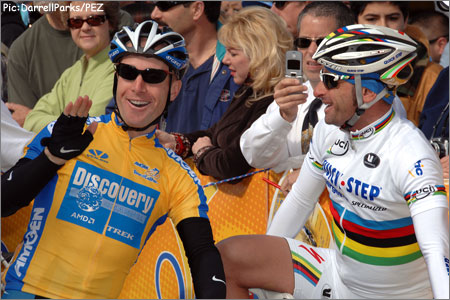 Even the normally stoic Leipheimer almost cheesed for the camera. 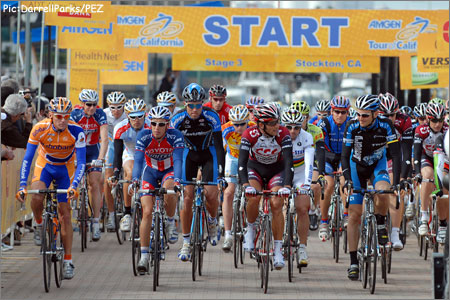 Then there was that pesky race to take care of…had to ruin all the fun…especially with all those Slipstream boys attacking immediately after the flag dropped.

We sat on the early break group up and over Patterson Pass, checking out the high-tech windmills as the seventeen break riders stretched their legs a bit but stayed together. My driver Jim punched it for a quick jet ahead to the KOM. It’s funny to pass the riders close by, babbling about who is doing what and they can all hear you. 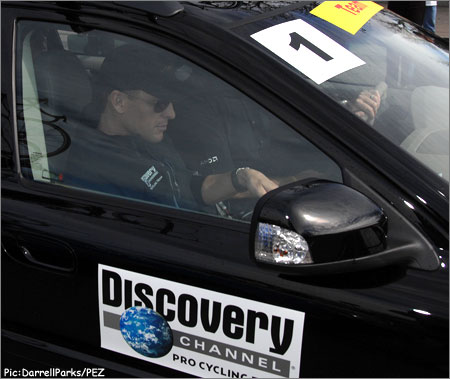 Hey wait, isn’t that? I’ve seen him before…yeah…that’s Lance Armstrong. Indeed, da boss was in attendance, and he had to be pleased with what he saw today.

There was a trace of a smile from the Slipstream boys after a quick comment about their superior tactics and stylish clothing. At the top we took a brief stop to cover the pass-through, with Slipstream’s Frischkorn proving me right by taking 1st place points, doing a good deed for teammate Peterson back in the field. 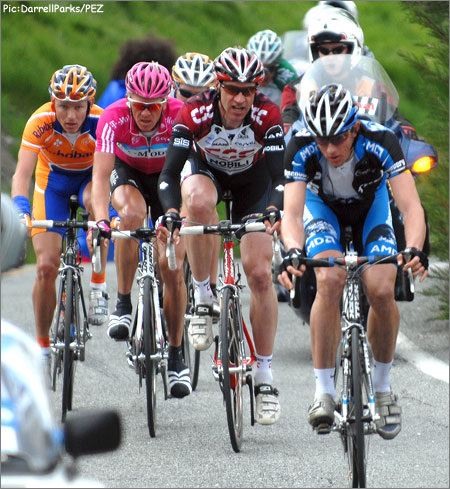 When the lead spread to near 5 minutes between the large early break and the field, it was time to start shuttling back and forth between the two. Team Discovery continually rode tempo at the front of the main field, so we jumped back to the break to get a quick word with their number 2 car, driven by recently retired pro Ekimov. 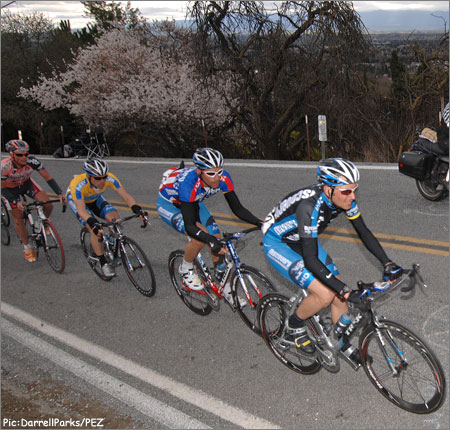 There was some hard work going on in the Disco camp at the front of the race today. It was immediately apparent that Levi was the Numero Uno, as all others were at the helm driving the pace.

Not the best phrased question ever, but I asked him when the team was going to start riding really hard behind. “They are riding hard,” was the limit of the response. Oh well. But it was clear that they would bring the gap down before the critical final climb. And their representative in the break, Jason McCartney, had fresh legs from sitting in and was sure to attack near the end as well. 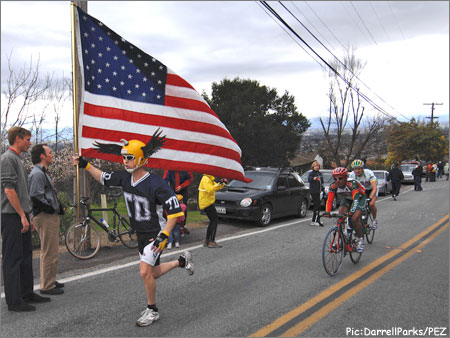 Fan Interlude! This fan was more than happy to accompany some later riders up the slopes. 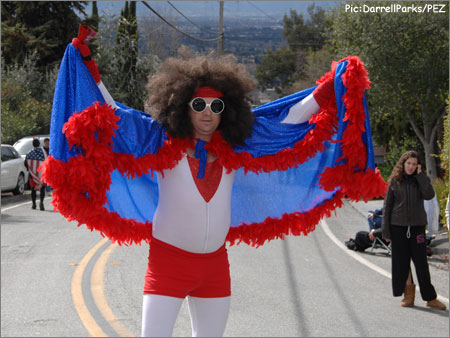 What’s there to say? 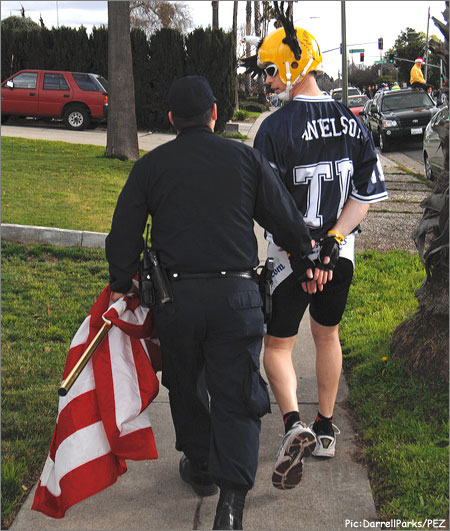 Fan #1 met an unfortunate demise in his fanning. That’s nice.

The gap was down to a minute and change as the break made the left up Sierra Road where the Cat 1 climb started. Our moto was right behind as the tired breakaway imploded, quickly leaving just 4-5 riders at the front. While we dodged the cyclists coming backwards at us, the official channel announced that Levi and company were coming forward from behind at a predictably rapid rate. 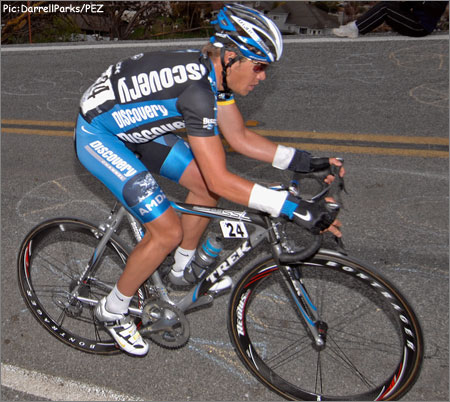 Tom Danielson plowed a lonely furrow on Sierra Road…well off the pace.

The groups crossed paths before the summit, where I tried to find words to describe Levi as he hammered through with just four others in tow. 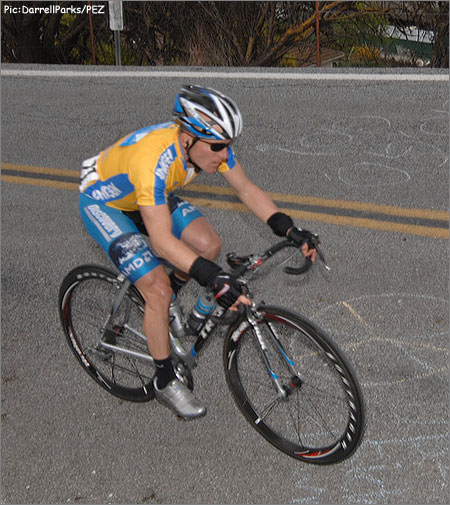 It was chaos behind us, so few vehicles could come through and we had the riders in sight just in front for the entire descent. The first five hundred meters, part of the road was washed out, which made me wonder about my future but the surface quickly improved. 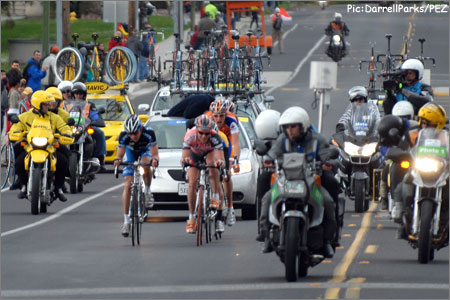 The leaders didn’t hesitate one bit after the climb – a bloc was the theme of the final kilometers.

Horner pushed it like a madman on the fast stretches, with the two Discovery riders doing their share on the flats between. I think our moto hit 60mph on a few stretches, but it’s hard to look at the speedo just hanging on. 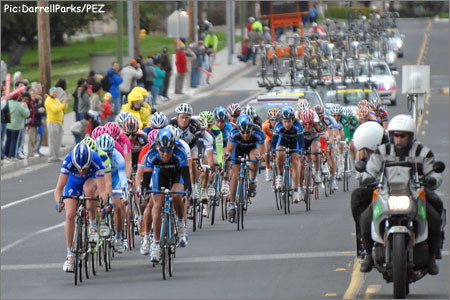 But oh boy did the remaining field put on a vicious chase – coming within just seconds of the three leaders at the finish. 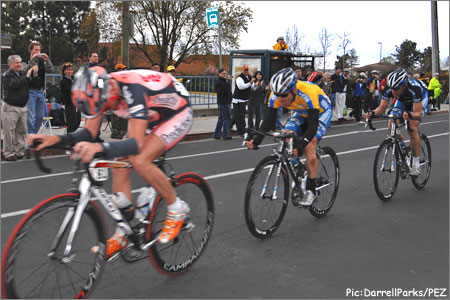 A maximum one-minute gap slowly decreased on the final run in to downtown San Jose, probably due to the growing size of the chase group behind. As both the finish line and the chasing group approached, the officials motioned us out of the way; our day was over. 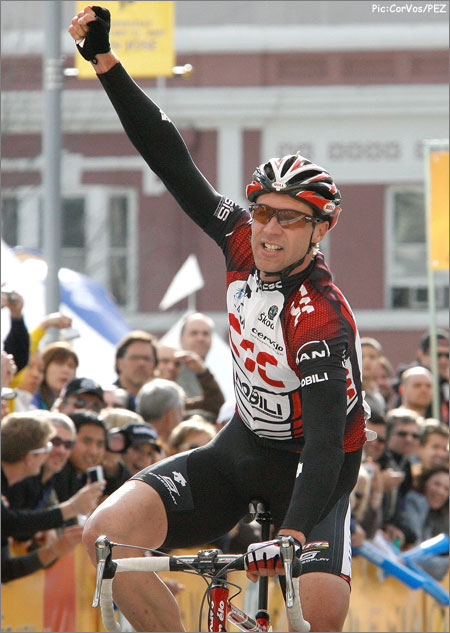 Now that was a hard day at the office – and a well-earned reward.