Thursday’s almost ridiculously beautiful trip along California’s Highway 1 resulted in the expected bunch sprint, but the usual suspects were pushed back today and instead it was two World Champions duking it out on the line: Elite Champ, Paolo Bettini, and U23 Champ, Gerald Ciolek.

If you’ve ever listened to race PA announcer Dave Towle, you could imagine him describing today’s route as a ‘panorama of pain.’ From his cohort Jeff Roake, you could expect something more sophisticated, something like ‘a vertiginous velour of velos.’ Whatever…. from the seat of the moto, Highway 1, rain, shine or hail, was fabulously indescribable today. 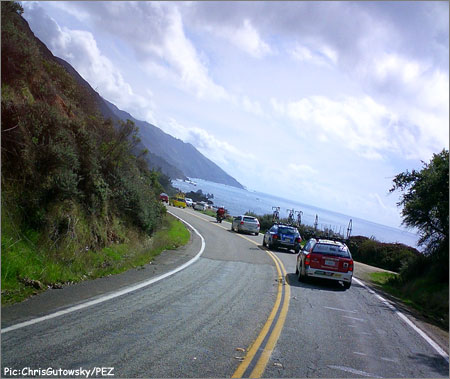 The highlight of the day (the week?; the sight of California’s rare condors, floating above and across our path, seemingly oblivious to the cycling chaos, which was both beneath them and alongside as they sailed next to the cliffs supporting the roadway. 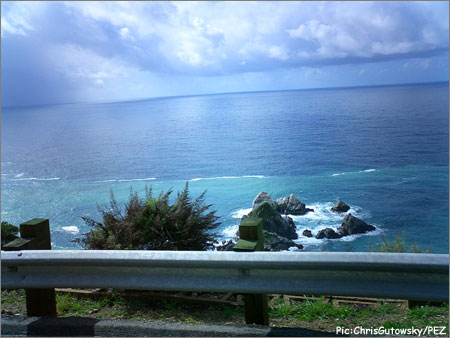 There was good racing going on for most of the stage, but the surrounding natural beauty was hard to ignore. The early breakaway of seven riders went well before the first KOM and stayed away most of the day. 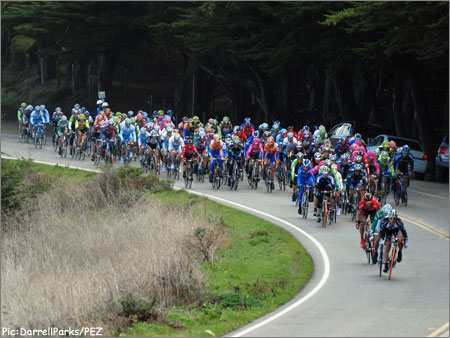 But once the break was set, it was hard to focus on the cycling dynamics, especially with rafts of sea otters dotting the waves like floating rocks as we stopped for a quick snack at one of the vista points. Or the ungainly lumps of seal lions littering the beaches near San Simeon. 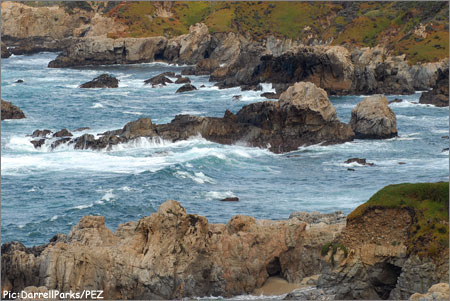 What’s up with this California scenery? I can’t take it anymore.

But we soldiered on and reported back to the finish, trying to convey some idea of the dynamics on the road. Despite some chilly rain and gratuitous hailstones early on, most of the stage was held under sunshine with a minimal amount of wind, often with some component pushing the riders. The final average speed of 26 mph reflected this, as well as the efforts of the lonely seven in keeping things moving along. 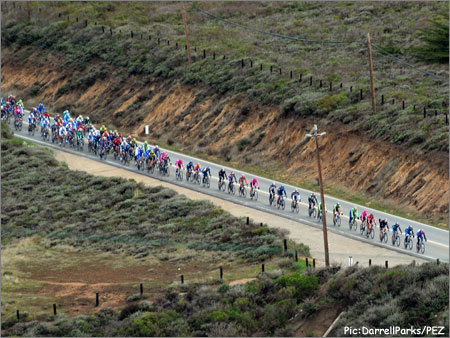 We closely followed the battle for the KOM jersey, as Slipstream’s Lucas Euser tried to steal points from Christophe Laurent of Credit Agricole. Besides the crazy finish run-in, the race within a race for the mountains lead was one of the best parts of the day. Stopping at each summit, we exchanged hellos with lots of cyclists, fans and, posed atop the roof of an SUV, the “angel.” 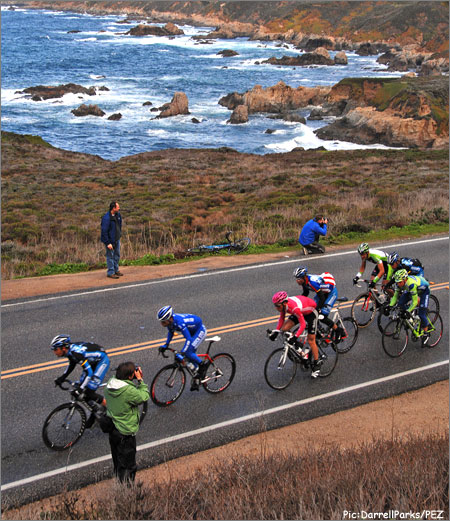 Discovery was once again glued to the front for virtually the full 5-hours of race time today.

And we had front-row seats for all three sprints as first Laurent then Euser then Laurent lunged forward to nab 1st place points. The rest of the break trailed through at a more rational effort level, anticipating the re-grouping on the descent. 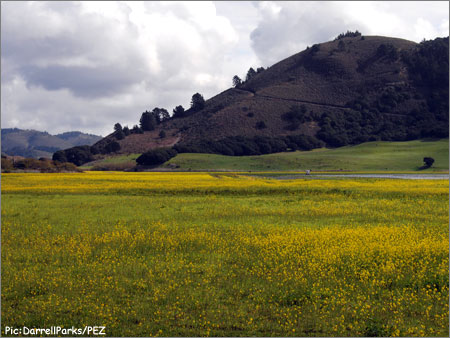 The area around Carmel is really hard on the eyes.

Flatter terrain helped the riders up the tempo near San Simeon, where the best view was momentarily inland to our left — the Herst castle glowing in the sunlight on a far off hillside. It must be California if you can see something like this, then stop at a tourism welcome station where they have good (good!) espresso and more-than-passable scones. Appropriately refueled, we jumped back to the break to watch their max 5-minute lead begin to fade. 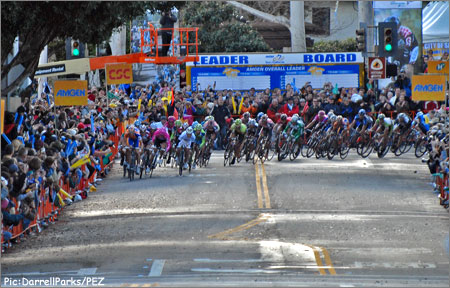 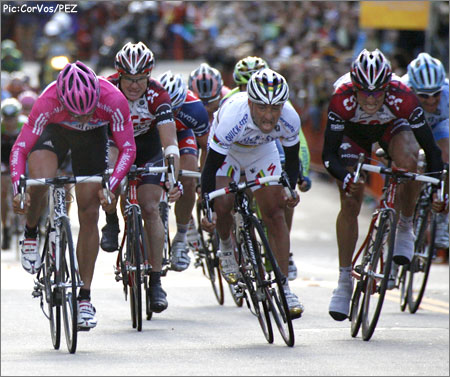 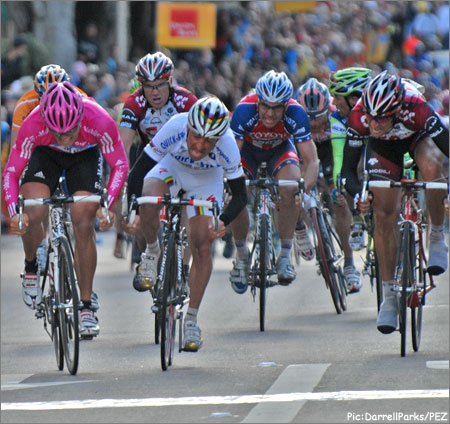 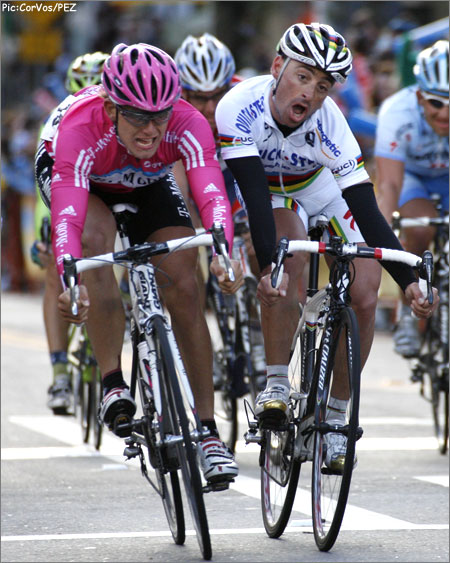 By the turn off 101 into Cuesta College, the leaders and the main group were just over a minute apart. Even the winding, left-right, right-left and bumpy back roads didn’t help, and it was all back together before the 5k to go sign. I missed yet another finish, but as I’m writing, I see a great shot of the photo-finish win by Bettini on the photogs laptop next to me. Bravo! Another beautiful shot to close out an image-filled day. 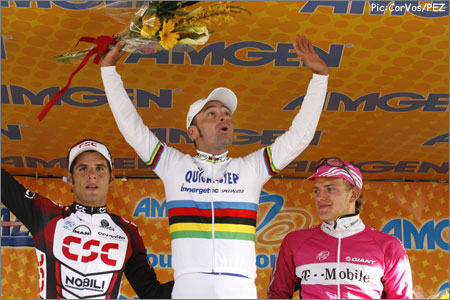 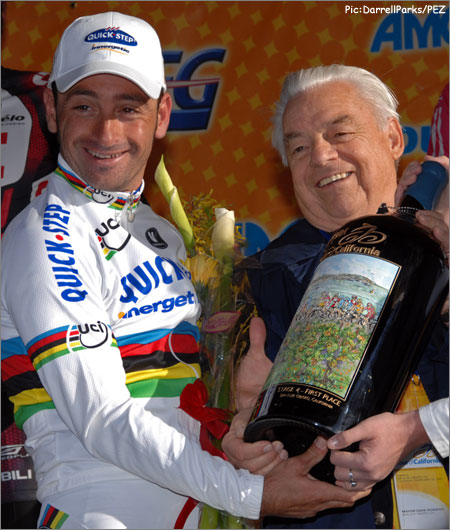 Methinks that bottle is bigger than Bettini.

Previewing Friday’s Crucial TT
The top 10 are all within 20 seconds of the Levi Leipheimer’s lead, and 23 riders are within 30 seconds. Realistically, only a few names probably have a chance at swiping Leipheimer’s lead over the undulating 14.5 mile course – and #2 overall, Jens Voigt, springs instantly to mind. Voigt is a masterful TT rider over the lesser distances, and it would seem that this one falls firmly in his wheelhouse. Leipheimer was supremely confident post-race today, but this writer seems to be the only one that thinks Levi is going to have his work cut out for him to defend that tenuous lead. My pick is Voigt, but there are many, many possibilities right behind him. A few names that you haven’t even heard mentioned yet could pull off a surprise – CSC seemed really confident in Julich before the start of the race, he’s sitting only 24 ticks back…that might be too much though.

It should be a real thriller tomorrow – so keep it tuned to PEZ for all your race fix needs.