Ever-smiling Italian, Allesandro Ballan (Lampre) looked even -happier than usual as he took his second major ProTour one day race of the year; adding the 12th Vattenfall Cyclassic – after 229 kilometres around the German countryside in, and around Hamburg – to his ’07 Tour of Flanders win.

A glance at the finish line still-photography might lead one to believe that
the tall, gangly Italian had out-sprinted three-time world champion, Oscar
Freire (Spain & Rabobank) and another world champion to boot – 2006 Salzburg under-23 winner and up-and-coming sprint star – Gerard Ciolek (T-Mobile & Germany). 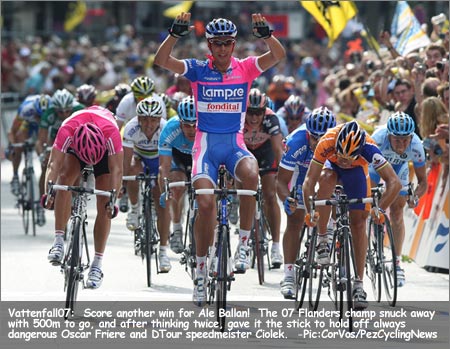 But Ballan had, in fact slipped away inside the last kilometre and even the
Rabobank and T-Mobile trains, plus all of Oscar’s guile and Ciolek’s
ambition, couldn’t get him back before the line. Ballan’s job was made easier by late crashes which felled pre-race favourites and sprint-specialists, Tom Boonen (QuickStep & Belgium) and Thor Hushovd (Credit Agricole & Norway) on the 40 kilometre finishing circuit, which was covered three times and included the race’s main obstacle, the 600 metre Waseberg climb. 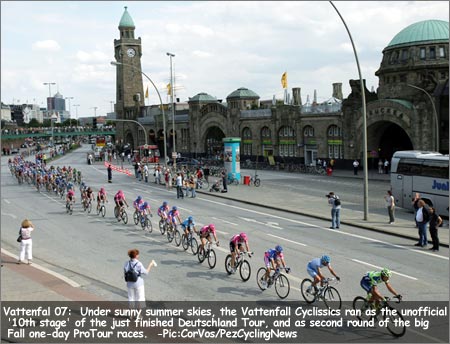 However, the day belonged to the 27 year-old from Treviso; he rode a quiet
Tour de France, but came out of it in good form, with a fourth place at The
San Sebastian Classic endorsing that the head and legs were both good. 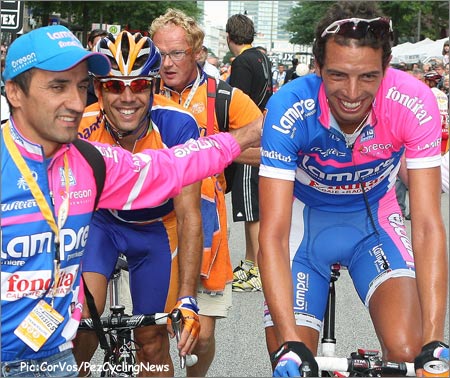 It’s all smiles for Ballan and Freirie at the finish.

Ciolek comes straight from three consecutive sprint wins in the Tour of Germany and will be desperate to use that form to land a really ‘big one.’ 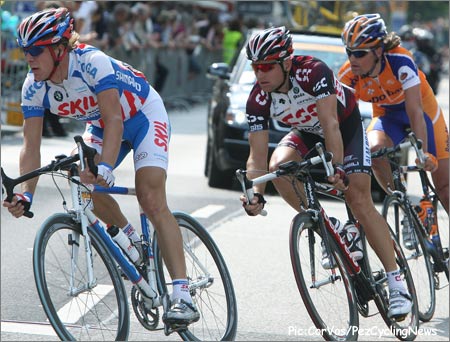 The break of the day was a whopper – Olympic team pursuit champion, Luke
Roberts (CSC & Australia), Gerben Lowik (Rabobank & Holland) plus Floris
Goesinnen (Skil Shimano) went-clear at 12 kilometres and weren’t seen again
until 19 to go; Roberts may be used to smooth changing, but this must be his
longest ever team-pursuit.

With a maximum lead of nearly quarter-of-an–hour, it looked like it just might be possible that they could make-it, but there were too many in-form sprinters behind to let that happen. Pro-Continental squad, Skil Shimano will be delighted with all that TV time, though. 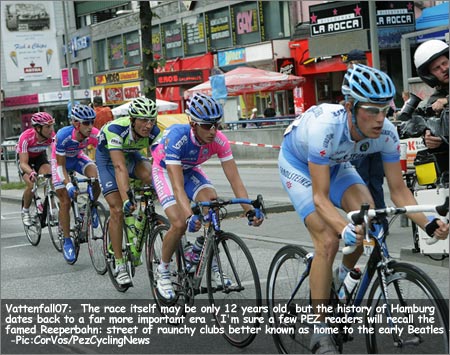 Once the trio was caught, it looked briefly as if a move sparked by double
Tour of Germany winner, Jens Voigt (CSC & Germany) might work; but with
Gerolsteiner, T-Mobile, Saunier and Rabobank all very frisky, that too was
doomed.

The ‘last roll of the dice’ went to Simon Gerrans (AG2R & Australia) and
Vladimir Gusev (Discovery & Russia) with a late ‘do-or-die’ bid, but Freire
and Ciolek’s trains were just too sharp; for all except Ballan, that is. 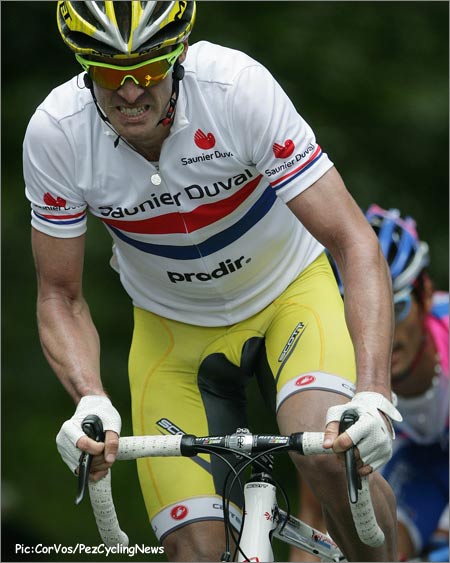 Last year at Salzburg, David Millar told me he would like to win the world
road race championship one day; very active in the finale today he took that
fresh British champion’s jersey to 11th place amongst the big sprinters –
watch that man.