The World Road Championships are unlike anything else on the elite calendar. Both Paulo Bettini and Fabian Cancellara repeated as victors in the men’s elite road and TT races, but witnessing the action roadside is never the same twice, as Ed Hood happily experienced yesterday…

09.05: The Italian and Spanish team buses are parked next to each other. Sanchez/Valverde/Freire plays Bettini/Pozzato. The Italians virtually sprint onto the bus, Bettini is tense but Rebellin is relaxed, he’s here to do a job, not to take the pressure and has time for a few autographs.

09.30: There’s the German team arriving, I go to get a photo of Schumacher, the Spaniards arrive behind my back, ain’t that life!

10.15: All my waiting is rewarded as Samuel, Alejandro and Oscar are so close I could touch them. ‘Samu’ seems ‘tranquil’, Alejandro gives little away, but Oscar is jumpy – that has to be a good sign. The throng behind try to get past me – forget it!

10.30: With a heat haze hanging over Stuttgart, little wind to speak of and a big crowd packing the start straight, the Italian squadra lead the 198 man field over the top. Philip Deignan of Ireland is stone last. There are just seven hours to go.

Lap two: Two K into the circuit: This is going to be a fast race, despite the tough parcours. Two are away but the bunch isn’t dawdling, the draft off the following cars rattles the fences, it’s that fast. There are lots of camper vans and lots of people.

Lap three: Top of the Herdweg climb: If this was Belgium or Italy, people would kill to be on this ramp, but there’s plenty of room, keen but not pro race-watchers, these Germans. There’s a Frenchman in the break of two, Auge; Voeckler is serious then. It’s not until the bunch streams-past on a narrow road like this that you realise just how many riders there out there, it takes an age to pass.

Lap four: To be honest, not much further than lap two: There was this beer garden and . . .

There’s three in the break, a tough-looking Russian is there too, now. Meanwhile, back in the bunch, riders strip-out undervests as the sun and the temperature climb. Lars Bak is right at the back (sorry), that’s two laps he’s been tail gunner, maybe he’s just taking-in the sights.

Lap five: The start of the Birkenkopf loop: this is a good spot, you get two bites at the cherry, as they drop from the left to start the loop, then they drop from the right to go back on to the main circuit. The climb? Hey! I did that on Friday, once is enough! The gap is almost exactly three minutes back to the torrent of colour that is the bunch, on its way down to Botnang. This part is technical, but the tar is warm, sticky and safe. There’s the broom wagon, no customers yet.

Lap six: Shumannstrasse in Botnang and that nasty tramline to cross: It’s no sweat in the sunshine, though. There’s a good crowd to clap through the lone Ukrainian leader, then a big group and a big gap back to the bunch. Somebody’s been busy! There’s Mark Cavendish, that boy has lost a lot of weight since his ‘chubby track man’ days, he’s looking comfy, but this heat will play right to the Italians and Spaniards.

Lap seven: Botnang: That coffee and cake hit the spot, I feel like a new man. It’s looking like it will all come together, it’s amazing how quickly gaps close on this course. The Dutch squad is using-up a lot of gas, to bring it together, a bit too early for comfort, really. And Sam Sanchez has two team mates pacing him back, he must have punctured.

Lap eight: Feuerbach: I was coming to that ‘easy’ part of the course past Botnang, with no pavements and big long straights; I thought, ‘I’ll hop the shuttle bus.” Last year at Salzburg they had mini-buses taking you round behind the race, to drop you off where you wanted; I befriended one of the old drivers and it ended-up, I practically had my own taxi. This year, I flag the bus down, jump-in and one of the passengers immediately says; “only if you have the bib” and he tugs at his photographers bib. Sometimes I don’t know where the words come from; “is it your bus, pal?” The driver shrugs and we’re off – in silence.

Our Ukranian has been absorbed, but not by the bunch, by the big group which has eased-away. Still the Orangemen burn those precious watts through Feuerbach.

Lap nine: At two K to go: Somehow I missed the 2 K sign on Friday, maybe it was exhaustion? This is where the finale-hurt commences, there’s no flat from here to the finish. The Stijn Devolder fan club has set-up shop here, steady with that German beer guys, that ain’t Belgian pils!

It’s also been declared ‘Zona Espana’ by the pavement artists, who will be extremely popular with the local Council.

It’s the second half now and the numbers have thinned-down. But it’s still early in the game, you only get one good hand at the Worlds and you can’t waste it. 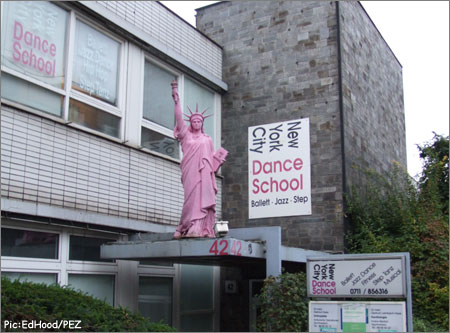 • Lap ten: New York City Dance School, approx. 1.5 K to go: I meet a Belgian guy taking pictures; “not enough people here, in Belgium, is boom, boom, boom! And not good that Merckx cannot come, not good!” I couldn’t have put it better myself. The Italians are playing their games out there, little moves and counter-moves. Machiavelli? He’d be Italian team boss, if he was alive today. There are a lot of guys living on borrowed time, in that bunch. Mark Cavendish has slid out of the back, why do the magazines say a young guy like him can win? Just let him get a ‘feel’ for the thing and maybe even finish it next year.

• Lap eleven: Red kite: “We’ve just passed the 200 kilometre point in the race, actually” the ‘speaker’ tells us. Barry Hoban always says that it’s when you get over 200 K that you separate the men from the boys. The shadows are long now and the wind is making the flags flutter. It’s split into two big groups; Italia lead group one at, “an average of 38.9 kilometres per hour” as the speaker adds, for the other group it’s academic. But it’s better to finish the Worlds, than not, for reasons of rider allocation for forthcoming Worlds and Olympics; the team managers will be on the radios; “come on son, just ride round.”

• Lap twelve: 500 metres to go: There are big screens at around 750 and 400 to go, the crowds are thickest there, the sun has found an after burner, despite the length of the shadows and the breeze is gentle now. There are 60 in with a chance and one of them is young Irishman, Philip Deignan. In a year or two, the Emerald Isle is going to have a strong team.

• Lap 13: Finish line: Billy Bilsland says; ‘the race, is the last hour – but you have to reach that hour.’ Well, here it is, two laps to go. There, on the big screen, are the riders at the head of the group, and it’s my home boy, David Millar – somebody give me a brandy, I’m not sure I can handle this!

• Last lap: Just past the finish: Rebellin and Kolobnev are just off the front, but it’s more of those games, Paolo or Pippo are the men, no question. Voeckler is off the back, I had him down as a ‘possible.’ Bodrogi rides past, jeez, he’s wasted. 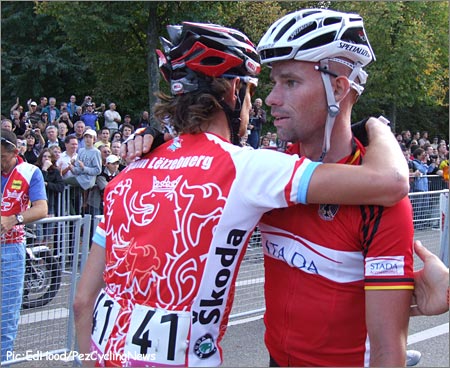 • The finish: Bettini wins, a man possessed, no surprise to me, I saw it in his face on Friday, when he trained on the circuit; Kolbnev is happy with second; Schumacher would have liked better and Schleck is gutted with fourth.
It’ll be quite a party in the Italian hotel, tonight. The Spanish digs will be quiet, though.