The 1971 world professional road race championships, Mendrisio, Italy, Eddy Merckx of Belgium wins from Felice Gimondi of Italy; as British magazine, Cycling Weekly said at the time; “Surely there could not have been many championships as great as this one.” Scotland’s Billy Bilsland was there and gives us the story…

Sprinting for seventh that day and finishing an eventual 14th, just behind his Tour-winning Peugeot team mate, Bernard Thevenet, but in front of riders like Franco Bitossi and Joop Zoetemelk was Scotland’s very-own Billy Bilsland; as Cycling Weekly said; “excellent!”

Billy’s take is slightly less effusive; ‘I got round and I finished.’ Here’s his tale:

PEZ: I believe you prepared fastidiously for the race?
BB: My Peugeot team mate, Jurgen Tschan was hoping to do a good ride at Mendrisio, he’d won a race at Dortmund and had good form. I worked hard for him that day in Germany and we decided to prepare properly for the worlds. We stayed at his home in Mannheim, Germany and did two weeks of 200 kilometre training runs. The goal was for Tschan to be ‘up-there’ on the day.

PEZ: So initially your goal was to support him, not ride for yourself?
BB: That’s right, we felt he had a realistic chance of a medal ride. As it transpired, he punctured three times in the race. I was wearing a GB jersey, and he was in the German squad, so it wasn’t like I could drop back for him, was it?

PEZ: Did you get much support from GB and Peugeot?
BB: Alex Taylor was the GB manager, he was a good guy. I had no complaints about the back-up I got. 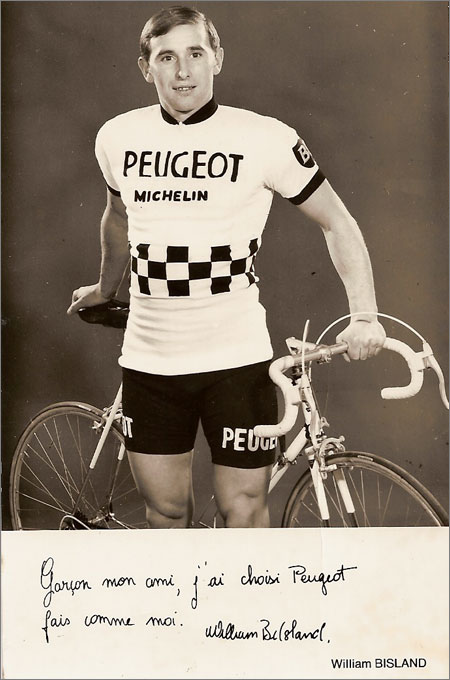 PEZ: Tell us about the race.
BB: It was a tough parcours with a hard climb every lap, the Worlds is a war of attrition, it all happens in the last hour, but you have to get to that hour, don’t you? After the early break was caught, Leif Mortensen of Denmark attacked on lap 13, Merckx, Gimondi, Georges Pintens of Belgium, Giancarlo Polidori of Italy and Cyrille Guimard of France went with him and that was the winning-break. Merckx went on the second-last lap and only Gimondi could respond. I had actually been up the road with Gimondi, earlier in the race, but he had been moaning at me for not going fast enough! In the sprint, Merckx was too-quick for Gimondi and Guimard took the sprint for the bronze. Even though Merckx won that day, it was the Italians who impressed me the most, their team-work was outstanding, they kept the race under-control, setting a very fast average speed which made it difficult for a break to go. In my view though, the Worlds weren’t as hard as the Classics, because you only had seven or eight Belgians, in the classics there were dozens of them, making life hard for everyone!

PEZ: You were in the sprint for seventh, weren’t you?
BB: Yes, Dancelli took it, I would definitely have finished higher, maybe top-ten, but the big French rider, Genet blocked me in the sprint.

PEZ: Do you view that ride as your finest hour?
BB: I got round and I finished, but I can remember days when I went better; in Flanders I rode the Geraardsbergen climb very strongly and was just behind the winning-break, Barry Hoban was with me, but my DS, Plaud told me not to work, because Barry was a good sprinter and I wasn’t to take him up to the break.

PEZ: Did you get much recognition in the UK for your performances?
BB: No, for one thing, I was a Scotsman, I would have got more attention if I was English and there was also a professional ‘scene’ in England in the early 70’s. I think the cycling media tended to focus on those home events rather than what guys like me were getting up-to across the Channel. Like the Good Book says; “A prophet is not without honour, save in his own country, and in his own house.”

PEZ would like to thank Billy for sharing his memories with us, and we wish his racing pigeons every success – he still has some of those habits he picked-up in Belgium, all those years ago.