The World Road Championships is a race that always delivers a surprise – either because we expect it, or don’t. Our Ed Hood was trackside in Plouay for the 2000 road champs, when the surprise winner was from Latvia. Latvia…?

Tchmil jumps from 400 out, a last toss of the dice to foil the sprinters but no one is buying and he’s swamped. All of a sudden it becomes apparent why the Poles did all that hard labour. We had thought they were on a lira pay-day. But no, big, square-shouldered Zbigniew Spruch is powering down the middle of the road.

He’s a bear of a man, always there when it matters in the northern classics and it looks like he’s going to give Poland her first-ever elite world road race champion; a cult rider – we can live with him in the rainbow jersey. 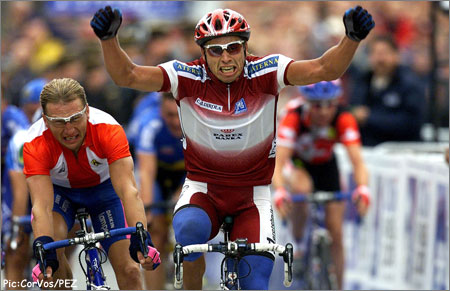 There are big guns firing behind though, Oscar Freire (Spain), not to mention Italians Michele Bartoli and Paolo Bettini. But Freire and ‘Micky’ touch wheels and Oscar will have to settle for bronze.

Just one rider manages to get round the big man from east of the Baltic and he too comes from behind the old Iron Curtain. The jersey has us beaten for a moment – maroon? Then it clicks – Latvia; Vainsteins! 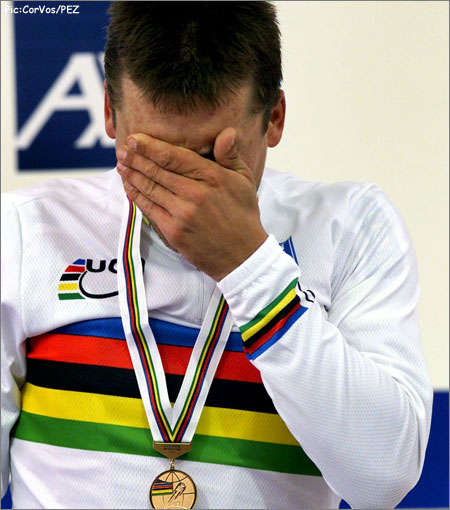 It’s a surprise and it isn’t; he’s had a couple of decent results – Tirreno and Giro stages plus the 1999 Paris – Brussels. The 2000 season saw him third in Flanders and San Sebastian but he’s what they call a ‘poacher’ in soccer. He hangs-around the right move, doesn’t work too hard and because he has a fair sprint he pinches placings.

The media-scrum surrounds him before his wheels have stopped turning and he’s crying already as his soigneur hugs him.

Our Worlds had started 36 hours earlier when we flew into Dinard, picked-up a hire car and headed south for Plouay. This is French cycling’s heartland, rural Brittany where every hill has a prime line and every village Main Street a finishing line. The Grand Prix Ouest France Plouay annually attracts crowds into six figures and the story is that one day it will be a World Cup race. 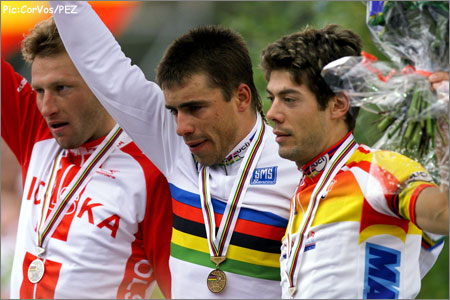 A Worlds podium with Freire on it and he wasn’t the winner…a true oddity.

We had decided to go back to nature and camp at Plouay. The only problem is that the ‘official camp site’ was a lorry park with no grass, just road metal.

It was just as well we had OD-ed on local cider and Pastis before we crawled into the tent. Come morning we limped out into the cool Atlantique air like old men.

Brittany isn’t the driest of places at the best of times; catching those moisture-laden south westerlies off the Bay of Biscay. In late September it doesn’t make for warm summer rain. Sure enough it was wrap-up cosy time on the Sunday race day. A hat was a ‘must’ as a chilly breeze drove a fine drizzle. 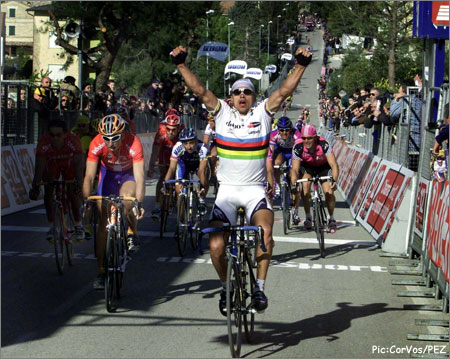 Vainsteins was a solid, quick finisher when he was on – as evidenced here with a win in 2001 at Tirreno-Adriatico.

It was those Poles who brought-back the break of the day and into the closing stages a sprint became inevitable despite the best efforts of Tchmil for Belgium and Rebellin for Italy to break the elastic. I managed to bribe us into the VIP grandstand for the finale where we enjoyed the luxury of live TV coverage.

Vainsteins rolled to a halt right in front of us after his victory but it all seemed a bit of an anti-climax. Not a bad world championship, but not a great one; the same statement could be applied to the winner although I think we never saw the best of the man. 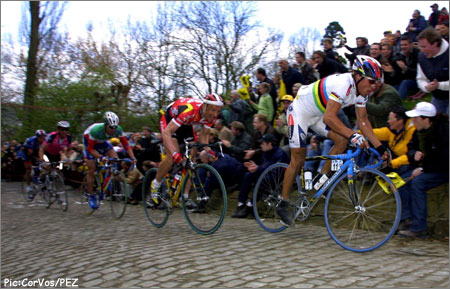 He was tough too – the Spring Classics saw some good rides from the Latvians.

His year as champion saw few good results and his career petered-out rapidly thereafter. He’s in the wine business now, not too long after Plouay he married into the Caldirola family, the wine producers who sponsored his team at the time of his triumph. 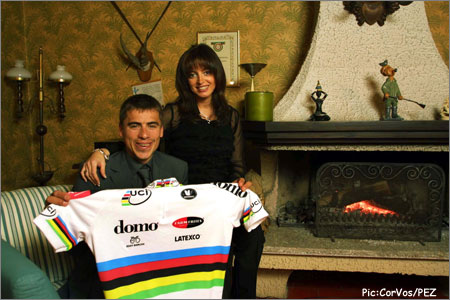 Biking is hard…the lure of the bike can’t be too convincing when you marry into the Caldirola’s, with a nice wife and child.

Like my Latvian buddy said; ‘what can you win after, that’s better than the Worlds?’

—
Keep it dialed to PEZ for full Worlds coverage from Stuttgart!

Magnus Maximus: It’s All Over