Italy goes two for two in the elite road races at the 2007 Worlds. After Marta Bastianelli’s win yesterday for the women, Franco Ballerini’s men stuck to their tactics and delivered another rainbow jersey for the Azzuri!

Paolo Bettini retains his title by a bike length after a desperate sprint saw him just …. just …get past Russia’s Alexander Kolobnev in the last 20 metres. Homeboy Stefan Schumacher rounded out the podium after a five-rider finishing sprint. 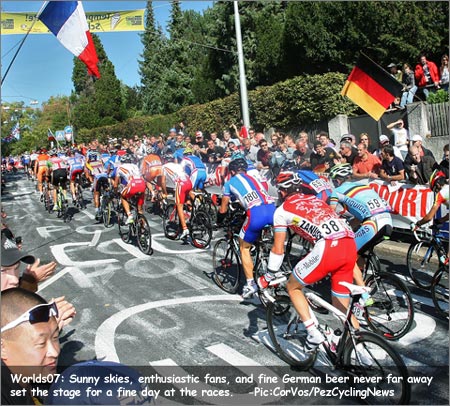 ‘Il Grillo’ let rip on the line with a series of gestures and pumping fists, unleashing the angst and frustration of the last few weeks. It was an emotional Bettini, in tears, as he talked about what his title win meant after his perceived injustices.

Kolobnev deserved the gold after a penultimate lap attack, and a brave bid for the win. He dived into the last corner and by the look on Bettini’s face, you could tell the Italian was giving everything he had to get past him.

Picking things up with two laps to go and there’s a mini-peloton of about 60 men in contention for the rainbow jersey. Italy leads the multicoloured bunch over the line, and all the favourites have survived – Bettini (politics aside) is concentrating, Zabel, Schumacher and Friere are comfortable, Hushovd and Cancellara are hanging on. 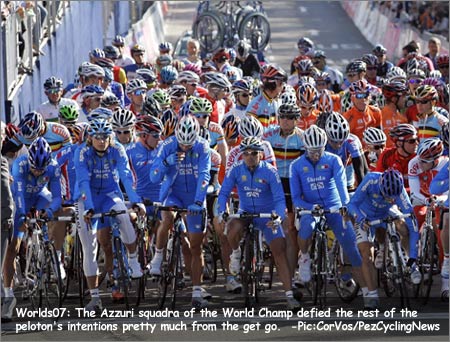 We had 14 laps of a course through Stuttgart’s leafier suburbs, with 198 starters. Some pundits speculated that a big group could end up sprinting for the title, but that many trips up the ferocious Herdweg climb (up to 13%) and the Birkenkopf (8%) will erode the peloton. The weather is good, though – warm and sunny after a cool start, so that will help the speed.

The first escapees from Fortress Peloton – Croatian Robert Kiserlovski and Slovakia’s Roman Bronis – are long gone, as are French veteran Stephane Auge and Colombia’s Marlon Perez who made the first meaningful break.

The next major move shaped the rest of the race: a big group went clear descending the Birkenkopf and stretched away. Present are guys like Julich, Voigt, Cunego, Sastre and Hushovd, around the halfway mark.

This group splits in half and is suddenly two minutes clear as they get organised. The Netherlands have two men there – Kroon and Gesink – but chase anyway, and Australia lend a hand to bring a new peloton together.

Two laps to go and Kolobnev and Rebellin go clear over the Birkenkopf. Rebellin gets a bad press as a wheelsucker, but he’s out front for now and working. Tin Tin’s move gives Italy a rest so Spain – Rodriguez, Sastre, Beltran and Barredo have to go to work.

The bell goes – 19kms left – and Kolobnev and Rebellin have 17 seconds. It’s nowhere near enough but Spain and Australia are burning their matches. Onto the Herdweg for the last time, Friere is gritting his teeth as the lead duo are swallowed up.

Samuel Sanchez attacks the descent after the Am Kraherwald summit. He stretches things – Schumacher and Wegmann close up and a new lead group of a dozen is clear. Valverde and Friere have missed out, but Bettini is there. Italy has three men, the Netherlands also, but there are danger men from Russia, Belgium and Australia!

Bettini launches just before the top of the Birkenkopf, but Frank Schleck comes past him with Stefan Schumacher. The Luxembourger tucks into his best aero position and flies the descent.

Bettini is desperate to retain his title and batters up the next small climb to Botnang. Kolobnev claws his way onto terms, bringing Evans, Schleck and Schumacher.

Five musketeers racing for the finish – it’s all downhill until Feuerbach, but the last two kms are uphill to the finishing line at Am Kochenhof.

Boogerd is killing himself to pull Thomas Dekker up to the leaders. Bettini knows he’s faster than his four companions, but he doesn’t want to take his chances against the fresher Spaniards – Valverde and Sanchez – in the chasing group.

Bettini waves Evans through and the lead is still intact. There are little digs up to the red kite – Schleck tows them under the one kilometre to go banner with Schumacher and Bettini looking calm.

Kolobnev goes for it with 300 metres to go. He gets through the final right-hand bend first and keeps the pressure on. Bettini’s eyeballs are on cartoon stalks as he bursts blood vessels to get past him.

Bettini gets his second world title, but only just, from Kolobnev and Schumacher. Schleck punches his handlebars in disgust and Evans is knackered. Rebellin jumps away from the chasers for sixth and Sammy Sanchez is first Spaniard home – a big disappointment for them – in seventh. 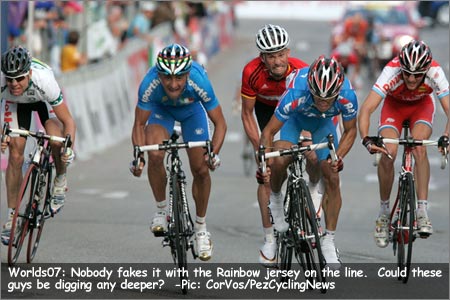 So Stuttgart and the UCI may or may not agree, but the tifosi are ecstatic with the result. The racket for the podium presentation suggests the crowd weren’t entirely thrilled. Huge ovation for Schumi’, lots of cheers for Kolobnev, but a fair few boos among the cheers for Bettini.

Pat McQuaid does the presentation and shakes hands with the defending champ, but … maybe he doesn’t look so pleased as he applauds and turns away. 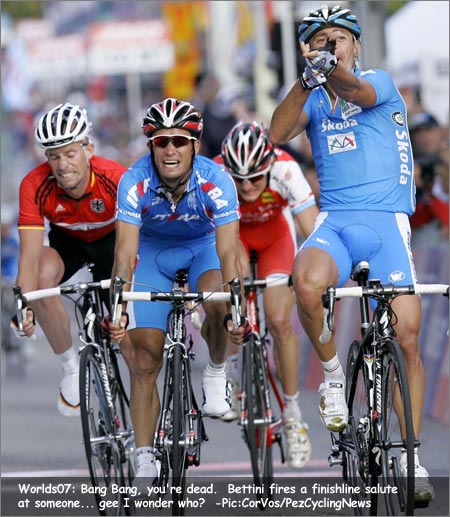 If you’re looking for today’s MVPs, look no further than Kolobnev and Alessandro Bertolini – the Italian did an absolutely stellar job for his nation. Congrats to Paolo Bettini – despite the politics, it’s magnificent to win back-to-back titles.

• Keep it dialed to PEZ all this week as we’ve got lots more from Stuttgart, including PEZ-Man Ed Hood’s eyewitness a accounts of the road races!