That’s right – I said “walks”… While the pros took to the course on their race machines for the recon laps, PEZ went one step further… actually it was several thousand steps… In our never-ending quest to provide even more in depth Worlds coverage, PEZ-man Ed Hood walked the entire men’s road race circuit for our up-closest preview ever!

My buddy Davie is a little crazy, he does 40 mile runs, climbs mountains and sleeps outside in the winter, just so as he doesn’t feel he’s getting old and soft. He was asking me about Stuttgart, and I said I’d be following riders in the time trial, chasing good quotes and I’d like to borrow a bike and ride the road race course. Davie fixed me with a stare; ‘a real man would walk it, get a feel for it, like the Formula One drivers do.’ It’s 3.45 pm, I left at 10.35, but I did it, Davie, I hope you’re reading this!

The course is tough from the start, dragging up to where the time trial started, past the pits, it will be no problem for a couple of glory hunters to clear-off up here. The Aussie team was gathering at the top, like a club run coming together, Matt Hayman wasn’t looking happy with the rest of them. Over-shoes and gloves were on order; it’s chilly in Stuttgart today. It drops away on the same route as the chronos and into the ‘big dipper’ I mentioned in my articles about the tests. 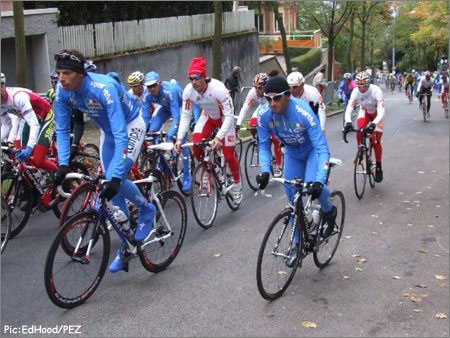 It rolls gently to start with but before the lumps get serious, it heads left into the suburbs at Herdweg for a little loop with a nasty ‘jag’ in it, the Polish team were wheezing like old guys at the top; it’s only 14 laps on Sunday, guys.

Some of the Italian team held their hands out on the climb, so as the kids could pat them as they climbed the hill, not Bettini – his face a mask of concentration. Vlad Karpets was also waiting on his club run at the top, he’s a big man, but his legs are so skinny, real pro’s legs. 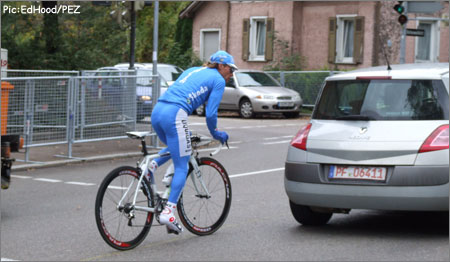 Double-take time, there’s Di Luca, I thought he wasn’t riding; Filippo Pozzato is there too, with not a long blond hair out of place.

Back on the ‘dipper’ with the beautiful trees of Killesberg Park on the right, there’s Cadel Evans, on his own, going the ‘wrong’ way; ‘hey Cadel!’ a nod and a wave comes in response. 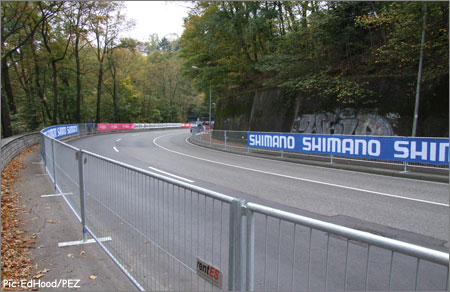 The humps get bigger, but just where the dog leg started in the chrono, the route dives left again for another loop. Down, down, down it twists, lefts, rights through a residential area; then at the bottom – straight back up, this is the start of the Birkenkopf climb.

There’s Di Luca again, this time I get the snap, he gives me a dirty look (or was that his friendly look?), he appears as serious as ever.

An old guy on a mountain bike tries to jump-on the French team, not today Granddad. 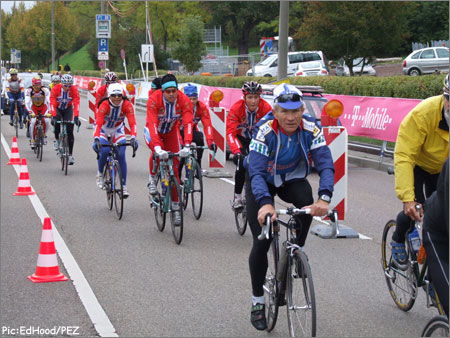 It’s long, long, long, turning left then right all the time, up through the trees, no houses up here. The further I walk, the more I realize that this is one serious climb, if a tall guy wins tomorrow, he’ll need to be really skinny or a ‘bear.’ Watching ‘off-duty’ pros climb this hill doesn’t give you the right impression, with their light touch on the pedals and steady shoulders it doesn’t look too hard, but watch those fit-looking ‘Sportiv’ guys, their lunging and heaving tells the story. 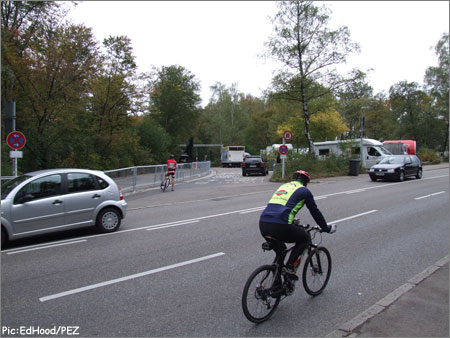 Fourteen times up here – whoever wins will be the best man, no question. The top, ease right and drop like a brick, simple – smooth, non-technical and fast. Where the loop ends is back on the chrono circuit which it more-or-less tracks all the way to the finish. 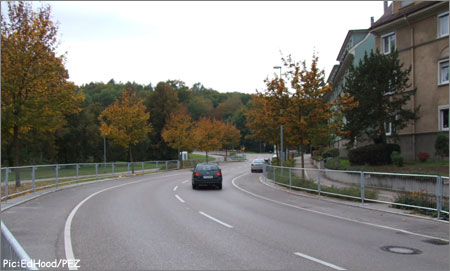 It continues to drop to the village of Botnang, urban, twisty, narrower and watch those tram tracks if it’s wet! 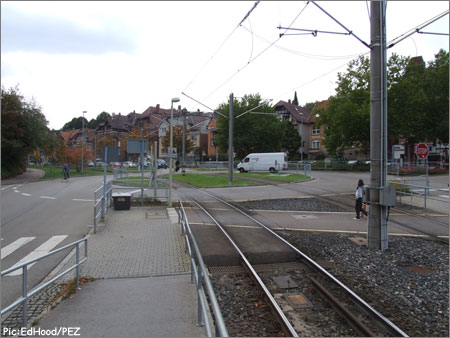 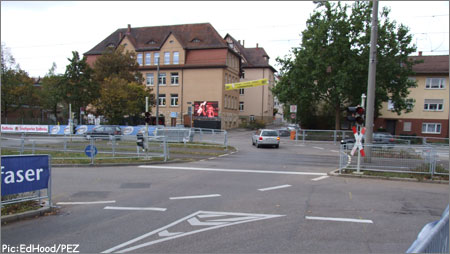 Schumannstrasse and there’s a 90 degree right across the tram tracks before kicking sharply upwards; an ideal spot to attack. 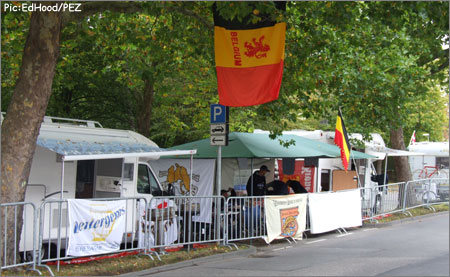 Out of Botnang and it’s the only part of the circuit that could be said to be ‘easy’, gently sweeping through a valley, flat and a good place to hide, freewheel, drink and, if it’s not going well, think about a new career. The camper vans are out here already. 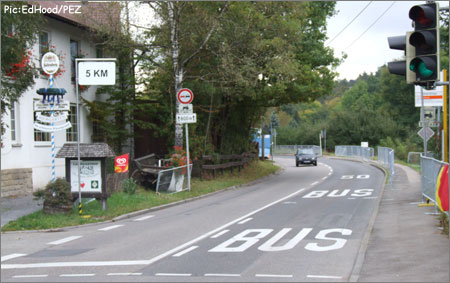 The village of Feuerbach and its 5 K to go outside a nice Inn; 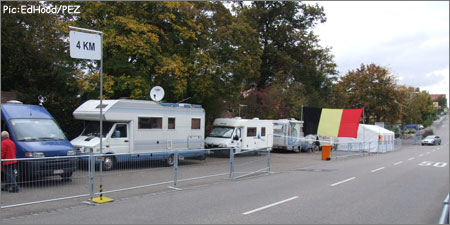 – 4 K to go and the Belgians have taken-over. The ‘touring’ country comes to an end and into Feuerbach-proper as it goes narrow and twisty through the main street. 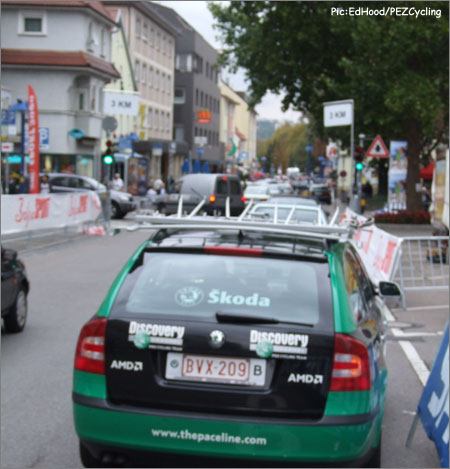 This would be a good place to be on race day with the pavement cafes and bends; a great race-watching location. The 3 k sign is right in the middle of the High Street, Eki has parked the Disco car there for me, so I can get an interesting picture; he won’t get to do that on Sunday, though. 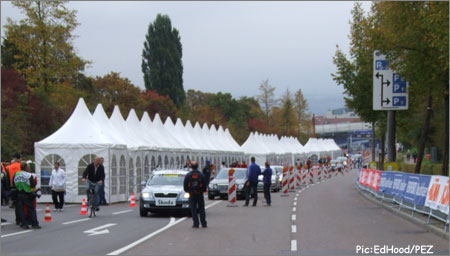 Once Feuerbach is behind the riders, it gets nasty again, up, up, right at the Hotel Europa, into Maybachstrasse and up some more. 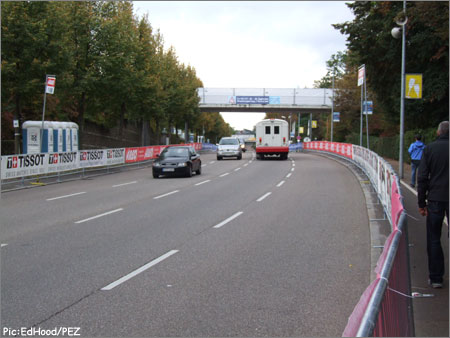 There really is nowhere to hide, it’s wide, exposed and all the time rising, at the 1 kilometre to go sign, the gradient eases, but the rider’s body weight is still fighting gravity; power-to-weight ratio is everything on this course. 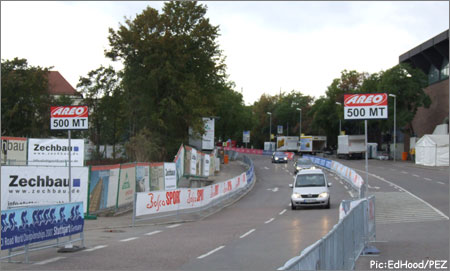 At 500 to go, it kicks-up and narrows, drifting right towards the finish grandstands,

– the final straight is 200 metres long, but that’s a long way to sprint after 267 kilometres like the ones we’ve just seen. 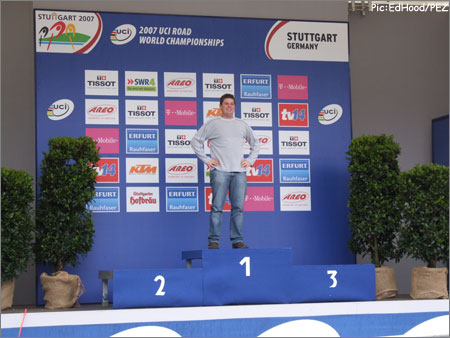 Our man in Spain, Alastair Hamilton thinks it will be a Spaniard; Oscar Freire or Alejandro Valverde, but I saw that look on Bettini’s face today, I say he’s the man for Sunday.