The World Champs race for Under 23’s is always a fast, unpredictable race and this year was no different. There were riders up the road all day, attack followed attack, but in the end there was a bunch sprint, carnage on the line, and a worthy winner.

The Under 23 Men’s road race is one of the most difficult races to predict, although the Italians will be strong as always. Outsiders can get a chance of a medal, East European countries do well as do the Scandinavians and then we have Belgium and Holland, Lars Boom should be keen after the TT win. This race is a good mix of Pro’s, wanabe Pro’s and up and coming sort of amateurs, what ever, it’s usually a good and open race. 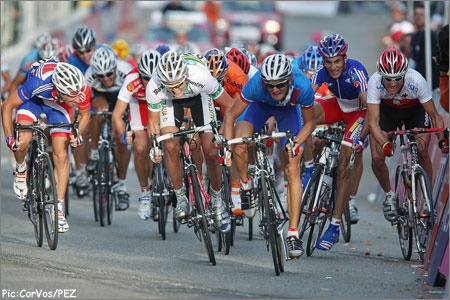 The course is the same as this morning’s woman’s race but longer. 172 kilometers, 9 laps of this tough circuit that had some of the women suffering early. The wind this morning knocked some crowd (what crowd?) barriers over into the race, but the main problems are those climbs which are deceivingly hard and after a few kilometers very wearing.

The Opening Laps
It’s a bit warmer than the women’s race, according to our man down on the course, Ed Hood; it must be nice weather as it has kept him out of the road-side bars! There was some early action with small breaks trying their hand and hoping they could be allowed a long break, this was not to be. A group did get three and a half minutes advantage with 100 kilometers still to cover, but they were going no where and were back amongst the bunch with 70 kilometers to the finish. 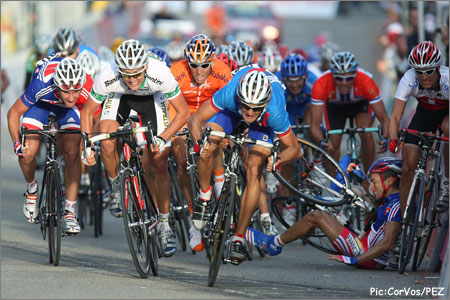 Italy are after more medals this afternoon and they send Stefano Pirazzi up the road, he has a lead of 30 seconds as we start lap seven, he is soon joined by Ignatas Konovalovas of Lituania and then by Pavel Kochetkov of Russia on the climb, Kotchetkov rides for Tinkov Pro team, but today wasn’t for him as he has a problem either with his bike or his legs and drops back. The other two are caught by Canadian rider, Christian Meier, but Pirazzi is in trouble (or resting) and not doing his turn. The bunch is at 25 seconds and not looking too worried at this time. 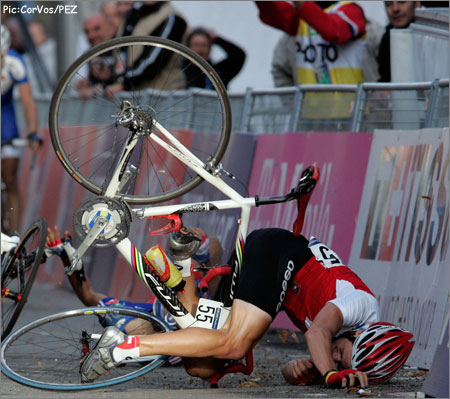 The final 50 Kilometers
Good to see they are stopping the trains to let the race through, we wouldn’t want a repeat of Paris-Roubaix the other year, although looking at what’s been going on in Germany recently they would blame the riders and threaten to stop the TV if the trains are late.

The three break away riders are now working smoothly together, no one country is chasing behind, someone from all, Maxim Belkov of Russia tries to bridge across as we come to the start of lap eight, the three leaders are still 25 seconds in front with Belkov between. Holland and Norway are leading the peloton with a half hearted chase, basically leaving the leaders out in the wind. 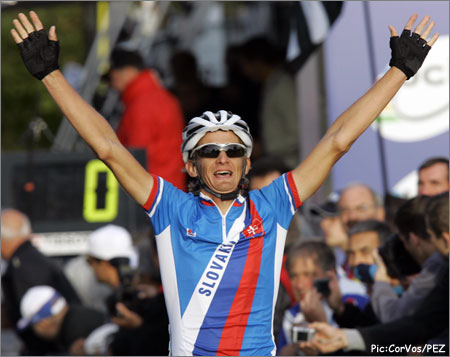 Slovakian rider, Peter Velits jumps away as the leaders are caught and the bunch splits under his impetus and TT Champ Lars Boom gets across to him, the peloton is now one long, thin line and it looks like this could be a very important time in the race. A large group of around 15 riders has formed with a slight lead and from them three riders have taken the lead, Boom (Holland), Taaramae (Estonia) and Spilak (Slovenia), they are being chased by a lone Danish rider, Fuglsang, then the main bunch, at least what’s left of them.

The Last Lap
Spilak goes for it on his own and is being chased by five others with only a matter of meters in front of the bunch, Jelle Vanendert (Belgium) brings the group together to make five, with Intxausti (Spain), Mollema (Holland) and Taaramae (Estonia), then to be joined by Costa (Portugal). 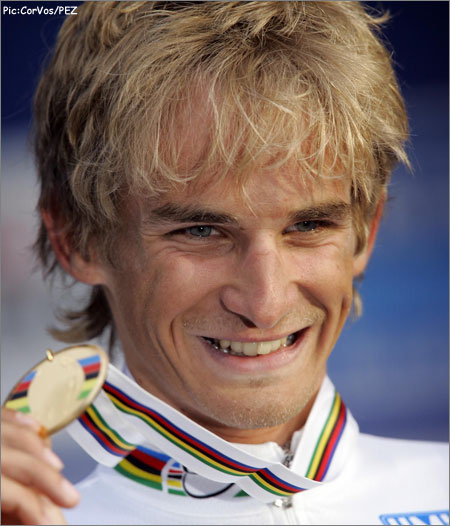 This situation didn’t last as the Italian led bunch soon had things together until Julien Simon (France) made an enormous attack on one of the climbs, behind was like a airplane crash with bodies every where, Simon had blasted it to pieces, five riders were on the hunt for the young Frenchman, including one of the favorites Rovny of Russia, who makes it across on his own and then tries to jump Simon.

All this was a waste of energy as the bunch catches them coming back into town and we now have a big bunch with three kilometers to go and it could be anyone’s race, again. 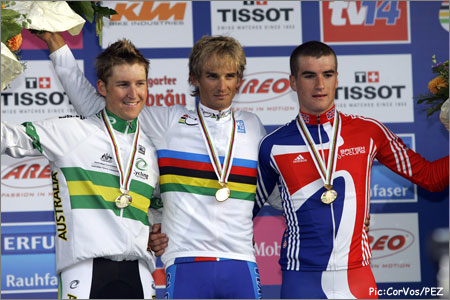 The Last Kilometer
The Russians are on the attack along with a Kazakstan, but it’s going to be a bunch sprint to decide the World Champs, a Dutch rider leads out and touches one of the French riders, who in turn hits a Swiss rider, all crashing heavily just a meter before the line, a Norwegian crosses the line on his back. Earlier break away rider Peter Velits (Slovakia) gets it just ahead of Australian Wesley Sulzberger and GB’s Jonathan Bellis.

A good attacking race and a worthy winner, shame about the crash, it wouldn’t have made any difference to the Gold medal, but I’m not sure about the others as the TV angle was all wrong.

Tomorrow should be a great race, if today’s racing is anything to go by. Remember to stay with PEZ.