California PEZ: Balcolm In The Middle

After seeing last year’s exciting stage from Santa Barbara to Santa Clarita that climbed over the ugly steep Balcolm Canyon, I knew this sucker had to be tested for myself. After 3 days of riding stages at ToC, I was ready for our queen stage, but never suspected it would be this tough…

I was still pretty tired from two heavy rides on stages 3 (over Mt. Hamilton) and stage 4 (to Moro Bay in the wind and rain), and the daily transfers and after midnite bedtimes added to slow recovery. 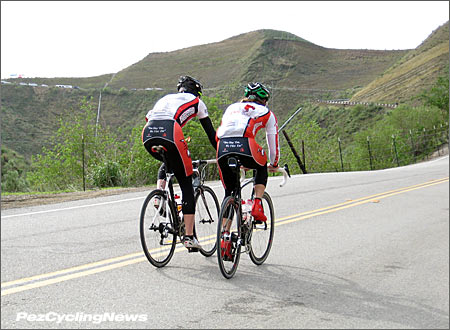 My honorary domestiques for the day lead the way onto the first slopes of Balcolm Canyon.

No worries though, the sun was finally shining and I enlisted ride support in the form of PEZ-Fan and Cat. 2 racer Mark-Paul Gosselaar (you might recognize him from his day-job as an actor… Saved By The Bell, NYPD Blue). We’d actually ‘met’ the first time couple years back for a phone interview, and as stage 6 was running through his neighborhood near Santa Clarita, we figured a ride was a good excuse to finally say hello in person – and there’s no telling when some ‘local’ knowledge will come in handy. 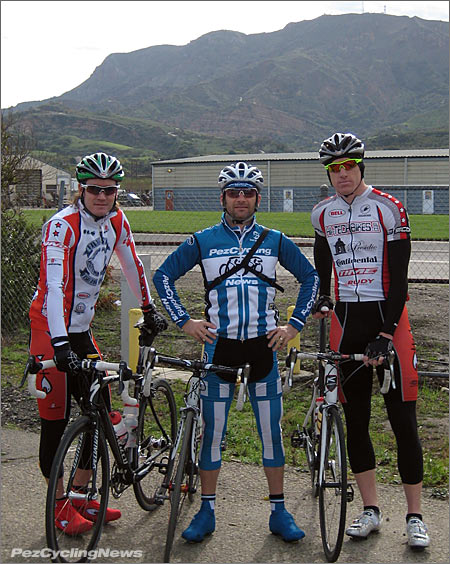 Today we RIDE! Mark-Paul, Nate & I pose off with Balcom Canyon somewhere in the distance.

We were joined at the hotel by one of Mark-Paul’s Team 5 Star Waste Vegetable Oil team mates (it’s like bio-diesel fuel) – a Cat. 1 racer named Nate Diebler – who’d never head of PEZ before (?), but whose “Boonen’-like” stature promised he’d be a useful engine over the planned 47 miles that lay ahead.

The day’s plan began in Santa Paul and ride about 47 miles (75km) alomg the course back to Santa Clarita.

Thanks again to Chris from LOOK Cycles who chauffered us to the appointed drop zone in Santa Paula – about 5 miles before the Balcolm Canyon climb. The plan was to ride back to the finish in Santa Clarita, taking in the ToC stage route.

On paper we had two obstacles ahead – the 20% grades up Balcolm and the longer but more gradual rise over Grimes Canyon. None of us (at least not me) expected the wind to be the day’s real challenge…

The profile looks worse than it really is, but they do need to add some vectors for the big-ass headwinds.

The ride to the base of Balcolm is a nice one – a meandering flat run along the side of a wide valley… but the wind was already blowing steady … so the easy spin was more of a slow tempo to get the legs primed. The land was noticeably greener in this southern part of California, and although fires had raged through here in recent years, there was plenty new vegetation taking root throughout the valley.

Twenty minutes later we turned right on Balcolm and started the slow rise up through the canyon. Even by 10 AM the local enforcement had closed down the road, which made for a nice traffic-free roadway. 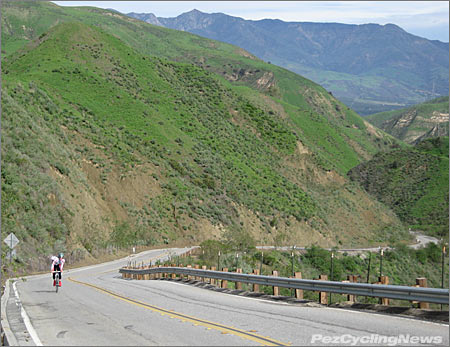 The climb starts in earnest at the bottom of this pic, then really kicks up at the sign post beside Mark-Paul.

The whole climb is not that long – about 1.7 miles from turn-off to summit, but the race guide lists the actual ‘climb’ as only a half mile (around 800 meters). The lower part of the canyon is a pretty mellow climb – I’d say 2-4 % for the first mile as it curves through the narrow canyon.

The real work starts as you round a blind right hand turn, and the severity of what you’re in for is glaringly revealed. From here you can see the summit as the road steepens to 10% pretty fast, and as the road gains the right side of the canyon it just gets steeper.

A few more yards and the grade goes steeper – I’m already out of gears and cursing the 39×25 that I’m left to grind out to the top. Forward motion at this point demands leaving the saddle and standing at attention – serving due respect to what looks to be a very painful next 300 yards.

It’s here the climb hits it’s steepest point – gotta be over 20% – reminds me of Fleche Wallon’s Mur de Huy – only without the quant Belgian brick houses, good beer, and is not quite as long… I’m climbing beside Nate who’s still talking to me (?)… Not wanting to be rude – I gasp out my last words… “I’ll have to finish this story later…” 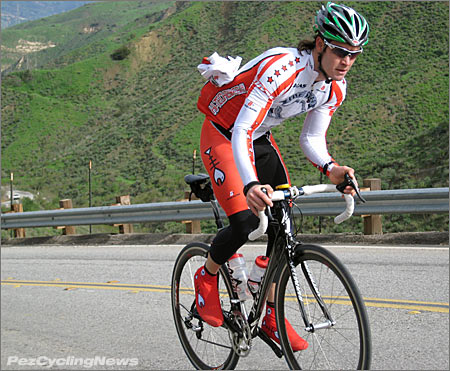 After tackling the low slopes like us regular folk, M-PG offered to be the on-bike photog, and rode the climb one handed…!

————
The grade gets so vertical that I’m forced into a photo-stop… my journalistic duties call and I heed the curiousity of PEZ-fans everywhere – time for some pics~ And although Mark-Paul and Nate are strong riders who I suspect both have the lungs and legs to take down Balcolm in one shot, they happily oblige my request.

The next 10 minutes are spent doing repeats of the steepest section – all in the name of story illustration – Mark-Paul drops back down for another run at it, then offers to take on camera duties so I can star in this production. We all drop back down one more time, and Nate and I settle in for a non-stop assault to the summit.

—–
So here’s a PEZ ‘first’ – we shot this next stop-action sequence on the hardest part of the climb – so if you scroll really fast, it will seem like you’re right there with us… sort of… 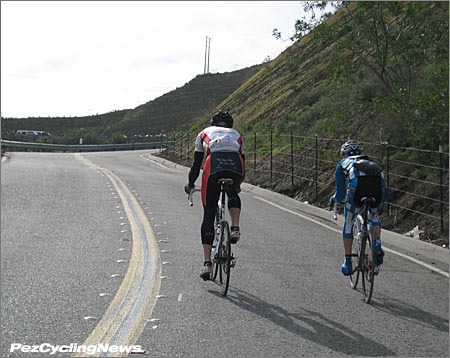 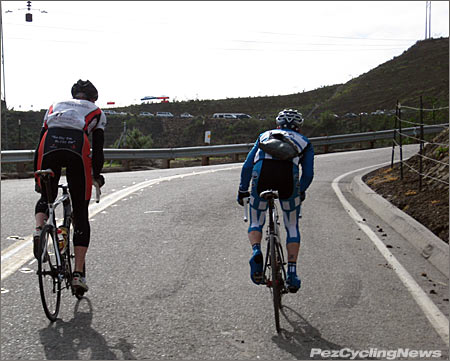 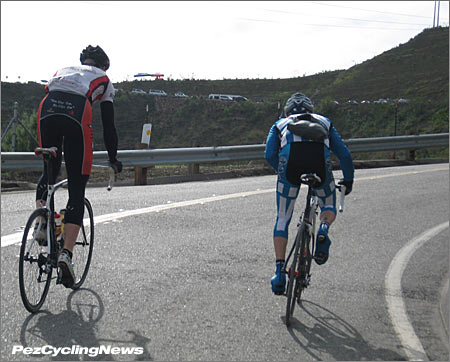 It’s here I realize an unexpected benefit of riding with an actor who understands the camera – Mark-Paul knows exactly how to frame up a photo and when to pull the trigger. (… that might sound easy but you try it…) But what really impressed was while Nate and I were mano a mano with our bikes and the climb – Mark-Paul was riding behind us shooting pics with one hand – while he handles his bike with the other… chapeau mon frиre! That is no easy task and definitely not recommended with proper supervision. 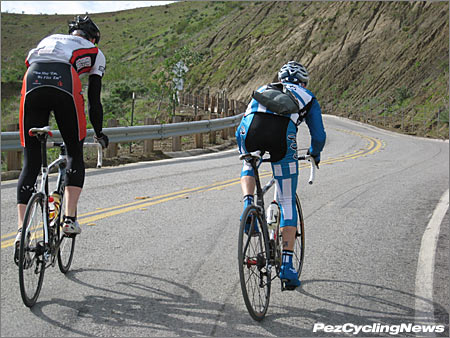 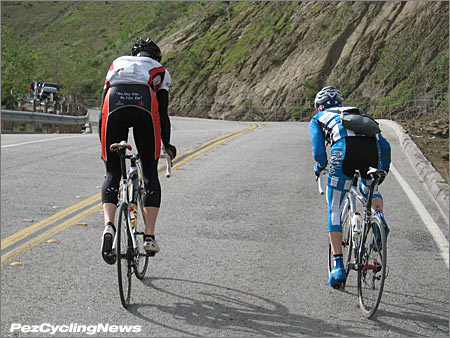 I’m deep in the red zone – maybe for 10seconds, maybe for a minute… there’s no telling as time suspends in these few hundred yards. 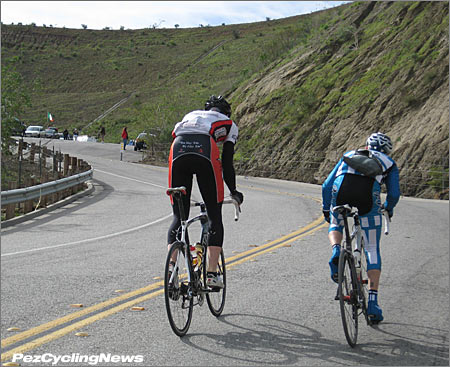 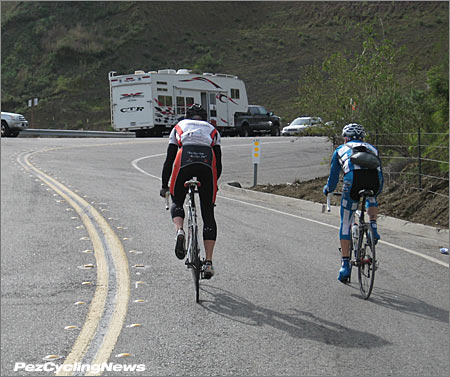 The pitch seems to drop from 20 to 15%, but we’re maybe only halfway there, and everything’s about to blow- legs, lungs, eyeballs – for a second my concscience whispers ‘paper-boy weave’… the horror…! I fight the urge – focus ahead and dig deeper than I have all winter to out power this beast…. 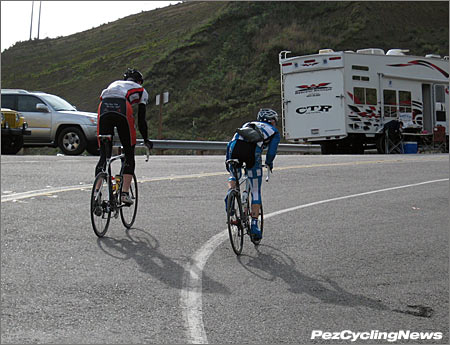 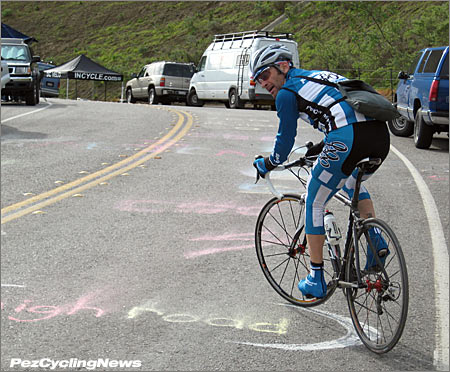 I finally lose my battle with straight vector mobility and surrender to traversing the road- I only need a couple of turns… honest… Mark-Paul is right behind us still snapping pics… but we’ve crested the worst of it as the road swings to the left as it wraps around the final elbow of the canyon. 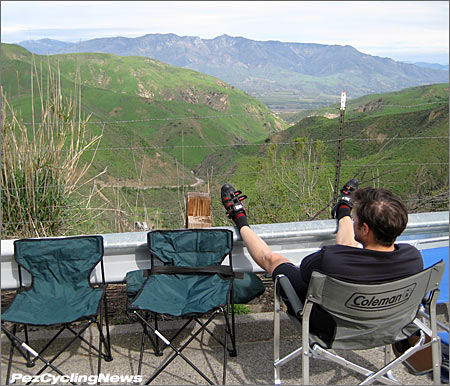 It’s not yet 1030 AM, but the fans are already here – not in the droves expected later, but a few hard-cores have been here all night – scoring the primo parking spots nearest the summit. The road painters are on the job and it’s easy to see the similarity to Alpe d’Huez. 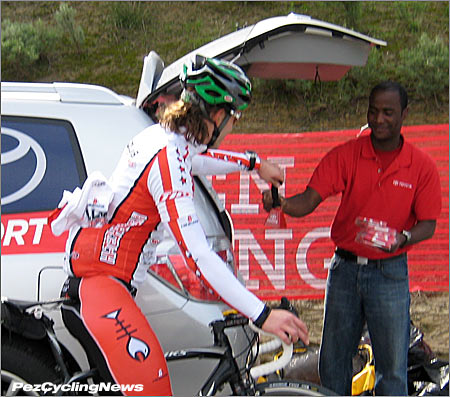 Once on top, Mark-Paul picks up ‘more cowbell’ for his 4year old son. 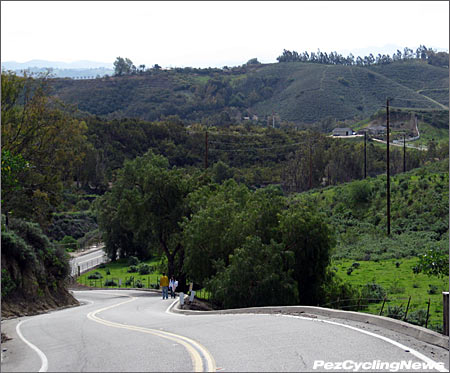 The summit actually arrives much sooner than expected… and even sooner that I wanted… so we take a few minutes to absorb the pre-race vibe, grab a gel and souvenir… then clip back in for the steep but short drop off the back and onto the next … 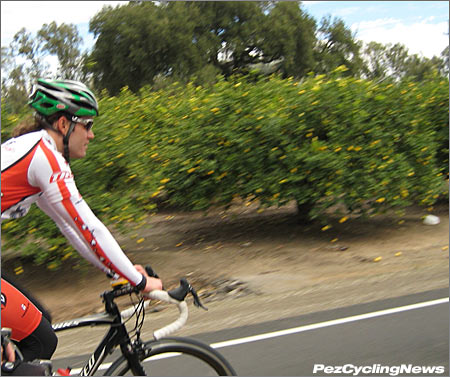 The sun has now warmed and we’re gliding past groves of Valencia orange trees plump with fruit and fragrant blossoms. The next part of the course rolls through some very scenic country roads, and it’s clear from the number of riders heading to Balcolm that it’s gonna be packed. 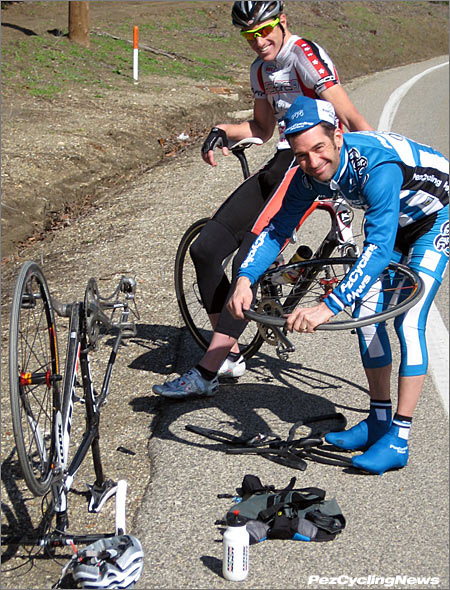 As we change direction, we eventually turn back into the wind and start a long gradual climb up to Grimes Canyon. Getting over the top is nowhere nearly as spectacular or painful as Balcolm, but it’s about 3 miles long and for sure a grinder. The effort is rewarded with an awesome descent that runs for 2-3 miles down the otherside- wide roads and fast turns that lead out of the hills for the stage, and onto the flats that run into Santa Clarita. 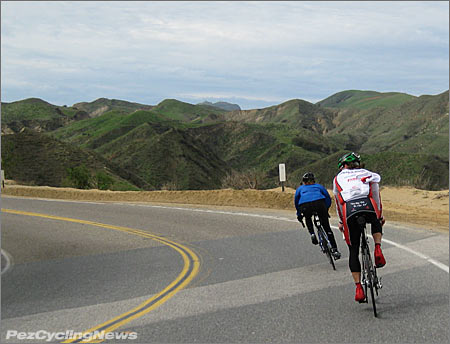 Here’s where the ride gets tough – for me at least. My legs are feeling the work of the last few days – you know when your thighs hurt on every pedal stroke – and the wind has picked up and blows us straight in the face.

We’re still 20 miles from the finish – and the thing about miles is that they’re damn long… 1600 meters to each one…! I’m thinking it’s time to single out and slide in behind the boys who continue to ride two up. I’m impressed and once again thankful that I’ve hooked up with riders clearly stronger than me. Amazingly both Mark-Paul and Nate put in to only 8-10 hours a week on the bike… that’s gotta be some high quality miles. 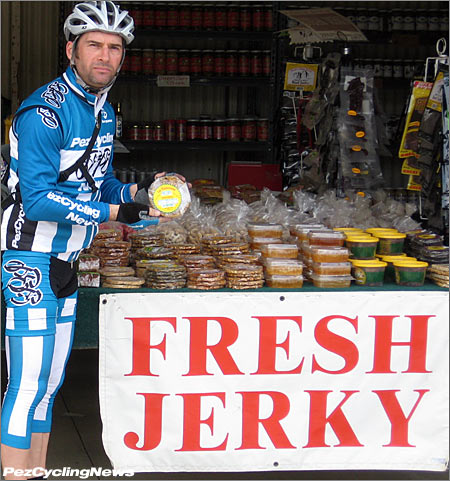 Local knowledge at it’s best – we bypass the AM/PM in favor of the local fruit vendor.

The best part of the ride is behind us and we’re left to follow highway 126 with no shortage of transport trailers but thankfully a very wide shoulder – all the way back to the finish. The pain in my near death legs confirms my ‘week-long’ training block is almost complete – all I gotta do is make it to the hotel. Mark-Paul peels off to get home in time to clean up and take his 4year old son to the bike race, and Nate faithfully slows his pace to shephard me the last few miles. 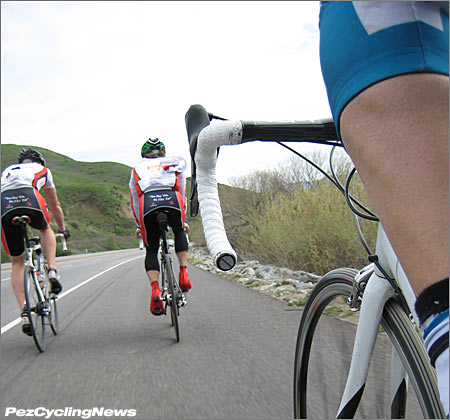 —–
It’s Monday and I’m back at PEZ HQ – tired but satisfied with some high volume and high-quality miles last week – should be perfect to launch me into the next phase of my Spring training. Overall it was the best ToC yet in my opinion – the weather made for some epic days, and Levi’s gotta be feeling good about proving he doesn’t need the race directors’ interference to win the race. Now if the organizers would only figure out how to make the internet work in the press rooms…

Thanks to LOOK CYCLE-USA for providing the bike – their value priced 585 carbon ride is well work a look.

Thanks also to Mark-Paul and Nate for the ride. Marl-Paul starts work on a new series by Steven Bochco for TNT slated to air Sept 1 @ 10PM following “The Closer”. He plays a guy with long hair… so keep your eyes peeled for that… maybe I can sneak a PEZ cap in there?

And finally thanks to all you PEZ-Fans out there for reading – and especially for saying hello at the race- as always it’s great to meet you… as we sure wouldn’t be here without you!

Next stop for us is Belgium – with Het Volk and Kuurne-Brussells-Kuurne opening the northern Classics this weekend.

Toolbox: 36 Ways to A Faster TT