But you can never leave. Wow, what a trip. It took many a solitary ride since my return home to distill all the sights and sounds that made up the Amgen Tour of California from this writer’s perspective. From seeing the Lion King roar again, all the way to watching smaller American teams riding their guts out against the big boys, there was never a dull moment among the beautiful landscape that is California. 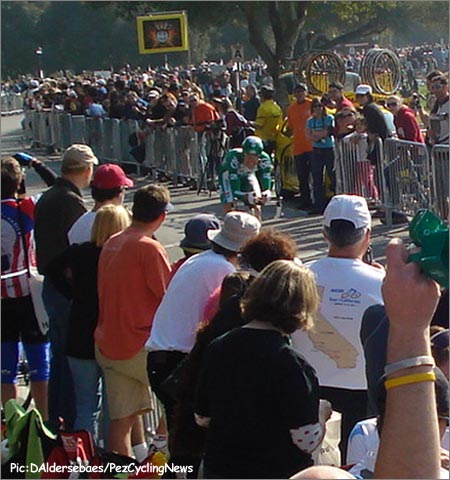 Big crowds again for another successful week of bike racing.

One thing is certain: this race has changed the face of the cycling calendar. To have a race this demanding, that draws this much of the worlds top talent in FEBRUARY is a twist and a half by the old schedule. Now in its third year with no end in sight, it seems as though the race has graduated from folly to institution and will be around for some time to come. For riders and fans alike, what’s there not to love? Great riding, good weather (well, um, mostly the assumption of good weather), lots of great scenery, and hey, you simply have to mention California girls, right? They wrote a song about em for cryin’ out loud! 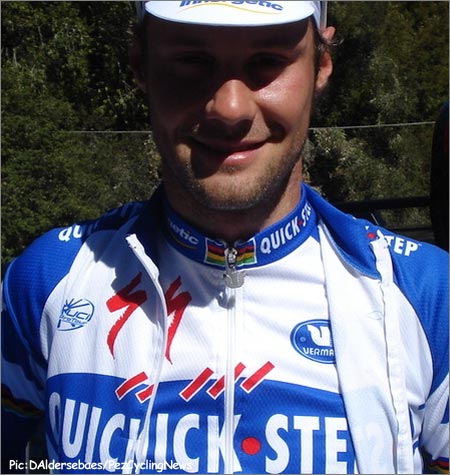 I had the early shift, as it were. I arrived four days before the start of the tour and rode around the area with some locals and the Palo Alto Bicycles LOOK bicycles ride, and bumped into Tom Boonen and the rest of Quick Step. I said ‘Tom, remember me from Hamilton? I write for Pez Cycling News’, to which he said, ‘Oh yes, you have the site with the girls, yes?’ classic stuff. The PEZ himself would take over later in the week so I had a limited time to get my fix of ATOC. 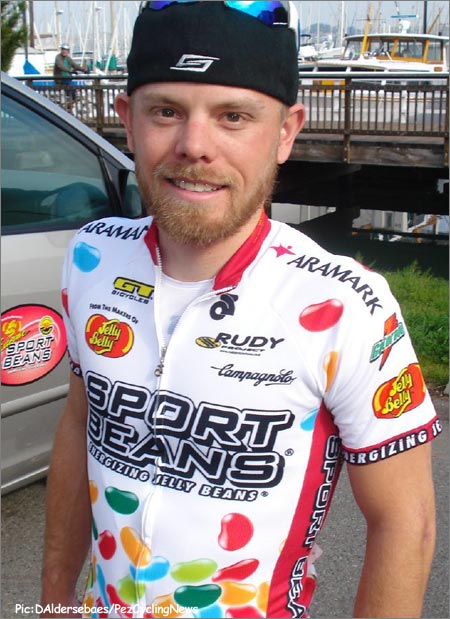 In one pre-ride, Michael Lange of Jelly Belly saved my ass by slowing up and handing off some Sport Beans. Damn, those things work like a charm. Thanks Michael, for waiting up for this big guy. On the same ride, thanks are again in order for Mark Jongsma. That guy pulled me everywhere and made sure I didn’t get lost. The beauty of Old La Honda (got it right this time, folks, in the original article I was cross eyed with exhaustion – thanks to Mike at Palo Alto Bicycles (and a few other PEZ-Fans) for setting me straight!) is something to behold. Immense redwoods, ‘Hincapie corner’ and up, up, up. You have to love it. Well, unless you’re me, then you love the scenery, and simply endure the ride. 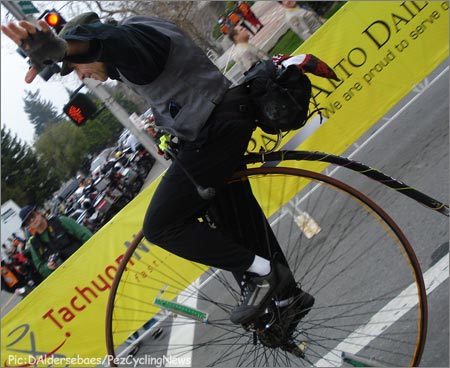 Try riding one of these down the start ramp…

Then it was on to the prologue, where before even the local celebrities took to the course, I saw a guy on a highwheel riding down the ramp. I thought the guy would chop his head off on the overhang, but he held on to race down the ramp, and even delighted the early fans with a victory salute. Granted the salute was 20 yards into the ride instead of at the end of the 2.1 mile course, but who was counting? Folks were drunk with anticipation for this ride! 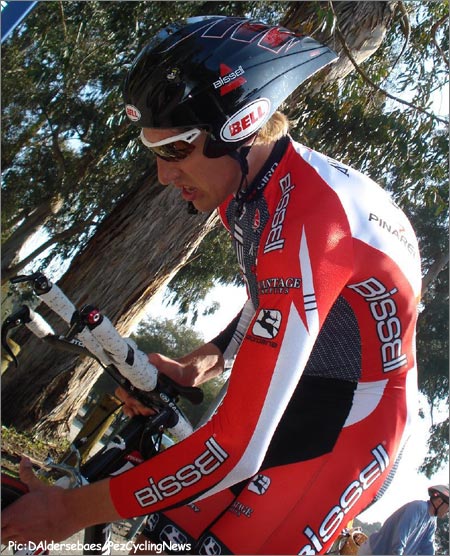 Getting a shot to follow Tom Zirbel was a blast too. That kid is one to watch against the clock now, and in the future. [PEZ Sez: It was complete fluke that I also got to chase Tom at the TT in Solvang – also an awesome experience.] 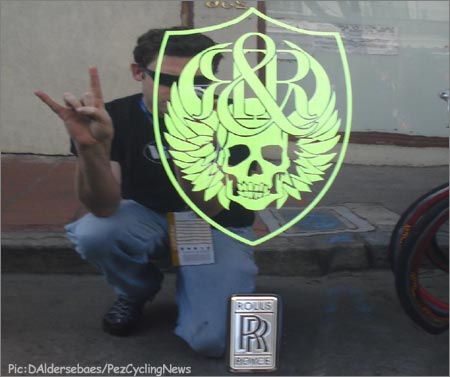 All the hype around the Rock Racing team was interesting to see. Most of it was selfmade, certainly, but it seemed to strike a cord with some fans. Some good, some not so good. In and out of the peloton, reactions were mixed. Overheard at the prologue being said by some cycling fans: “I’m not sure if skulls are good for cycling”. Buddy, not sure where you’re going with that remark, but I’ll tell you what – any press is good press. And this team drew the fans, the curious, and the Mario seekers out in force.

I’d be remiss to not mention the great wines of the area, too. Man, no kidding. If you’re in that neck of the woods, you HAVE to try some of the local wines. 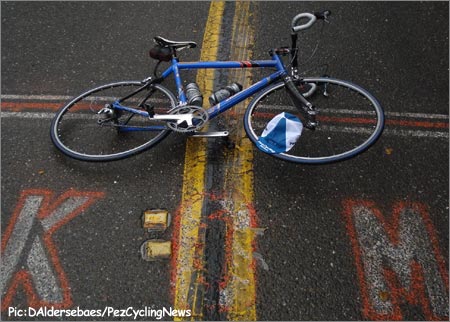 Highlight of the trip, and I’m kicking myself for not having the moment captured on film: on the Santa Rosa day, I was bumping around the finishing circuits in my Pez kit, trying to get photos and such. The race ended, and upon seeing some Credit Agricole riders slide past with backpacks and no helmets, I decided to pop onto the course and follow them a bit. Perhaps it’s the slick CapoForma Pez kits and the fact that to the layman’s eye I look relatively fit, but the crowds in the finishing straight thought I was a pro. So, thinking ‘when in Rome’ I sat up and blew a few kisses, which drew raucous cheers. A security guy saw through it and tried to reach for me, but a flick of the handlebars evaded him. I continued blowing kisses and taking bows, much to the delight of the crowd. Was it really a ruse? Nah, not really. 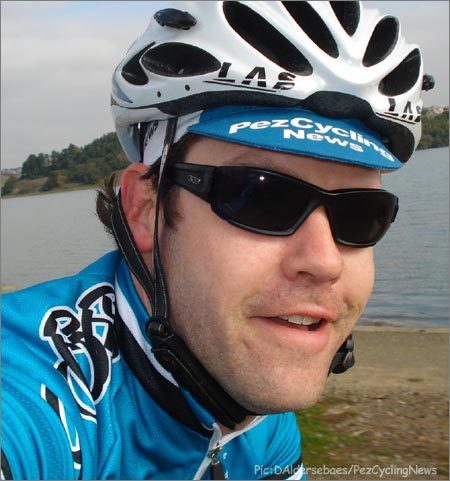 The love of PEZ permeated each day there, so I thought of it as showing respect back to the crowds. My knees were a little twitchy as it’s been a while since I’ve been in front of that many people, but it sure was exciting. I followed the CA boys off course, and received many a slap on the back and lots of ‘great jobs’. I knew they thought I had ridden the race, and in some sense, I guess I had in my own journalistic fashion. That’s a race in and of itself. Get the story, follow the race, do the transfer, get the quotes, get to the hotel, write the story, find time to eat, get some sleep, wake up early and do it all again. 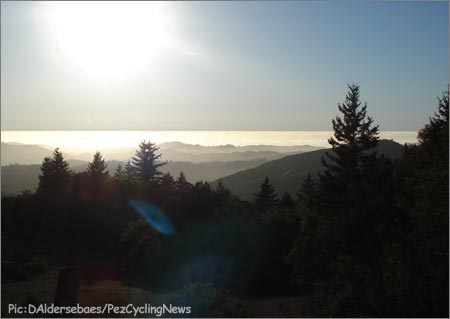 The Amgen Tour of California 2008 was a smashing success, thanks for reading and I hope you enjoyed our coverage.