It was a day for those fast and powerful men, as the short prologue course for the 2008 Amgen Tour of California would not give much quarter to those who didn’t bring 100% from start to finish. The big story was Cancellara’s storming win, but there was plenty of action all day long – and PEZ stepped right into it…

Huge crowds and sunny skies can only mean one thing – great racing ahead. 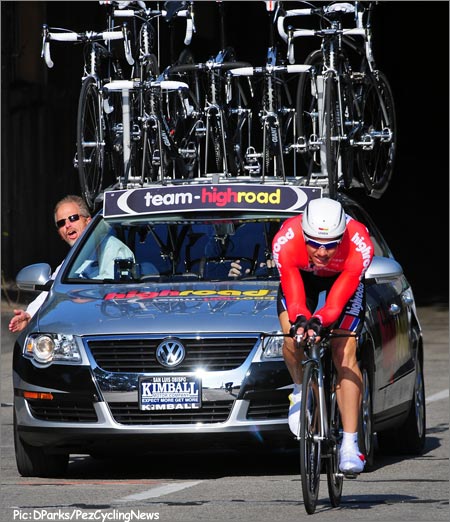 The fog that plagued the morning lifted as the buzz about Palo Alto reached a fever pitch. The fans were out in the tens of thousands to line the short course in and around Stanford University. A light breeze blew as the sun finally came out for good, and the world’s best riders put on a hell of a show for the fans. “Pretty massive” said a local Palo Alto cop who was helping direct traffic when asked what he thought of the event “pretty massive indeed.” 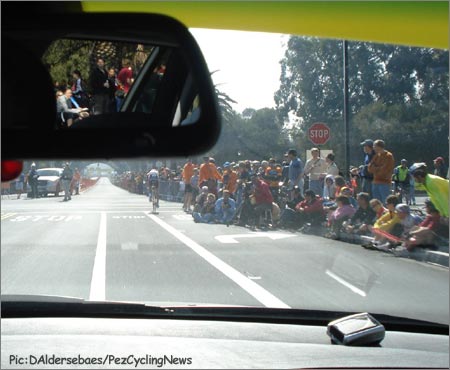 Bissell’s Tom Zirbel takes to the streets with PEZ in hot pursuit.

A funny start to the day had to be stopping by the Rock Racing bus to find my fellow Portlander Doug Ollerenshaw frantically jumping on his trainer. In his zeal to start the race, he had forgotten to pin up, and leave it to a trusty PEZ reporter to take that responsibility. I pinned him up as he spun inside the Studio 54-esque tape, while a throng of onlookers watched. 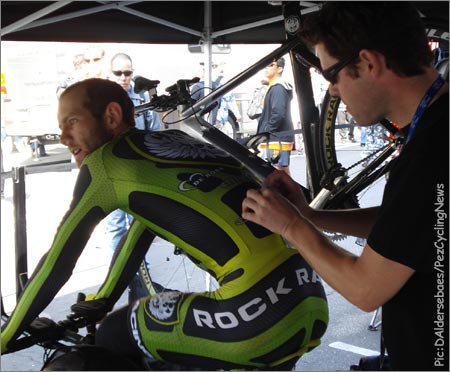 The curiosity of the crowd, certainly piqued by the drama within the team leading up to the start of the race, helped launch a massive cheer for Ollerenshaw as he shot down the ramp to turn the first pedals in anger for the team at the AToC. 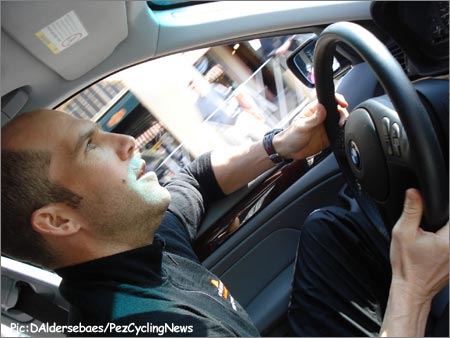 Mark Olson at the wheel of the Bissell team car.

I then got a great break from the fine folks at the Bissell pro cycling team, and was awarded shotgun in the team car as Tom Zirbel rocketed around the course. Myself, and a few other sponsors spent the 2.1 miles leaning out the window shouting encouragement, and that was quite an experience. Damn near lost my voice for the shouting. Fast kid, that Zirbel. Look for great things from this team this year; they’re quietly stacked with talent. A big Pez thank you to Mark Olson of the Bissell pro cycling team for letting me hitch a ride, and a Pez hello to Mike Zellman of SRAM, who lives in my hometown, outside of Chicago. Small world, eh? 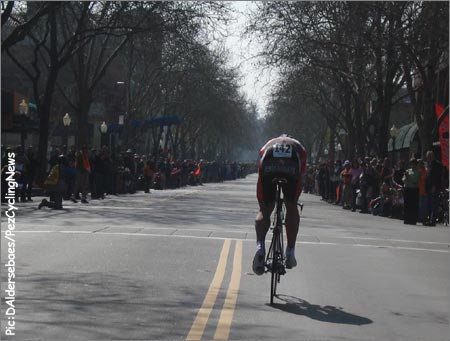 Dave Zabriskie sat on the best time for most of the early day, as the other heavy hitters got ready, and the crowd’s excitement created some palpable energy in the air. Crowds gathered around David Millar, George Hincapie, and Levi Leipheimer as they warmed up near the start line. A huge cheer went up as Fabian Cancellara slid up to the line, resplendent in the World Champion skinsuit. Yup, this course was suited perfectly to the Swiss Juggernaut. 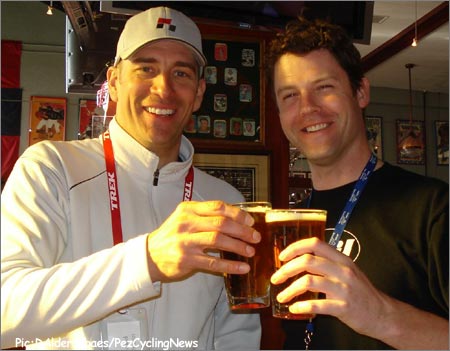 Two of the tallest guys at ToC – or likely in cycling – SRAMs Michael Zellman knows how to shmooze the press….

The crowds were as thick as molasses around the start finish area, as Dave Towle commentated as only he knows how, whipping the crowd into a frenzy as the big names made their way down the palm tree lined roads. Cancellara won handily, and, somewhat surprisingly, Leipheimer and Hincapie missed podium spots by a few seconds. However, all the big guys are separated by mere seconds, and tomorrow should prove to better give the lay of the land in the GC.

Amazing stuff from California and it’s only getting started!

California’08 Prologue: Nobody Does It Better!