With the end of TOC also comes a long awaited winter thaw… it’s time to get racing again! Like every race we cover, there’s a lot more to see than we have time or space to report, so here’s my own collection of some noteworthy gear and moments from California…

In no particular order, here are some random shots and thoughts worth a look… 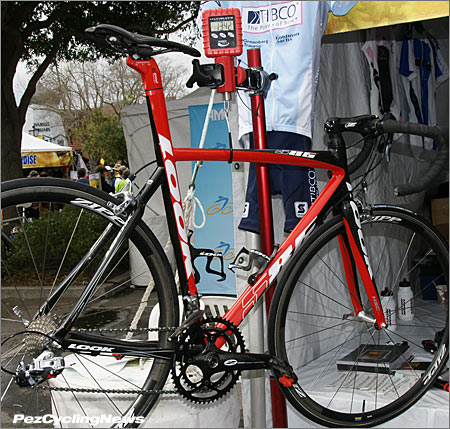 LOOK’s 586 is brand new for 2008 and while keeping the ride-quality LOOK prides itself on, the non-lugged carbon frame is the lightest in the line. Ming and the boys at LOOKCYCLE-USA went a few steps further, building up this 586 to tip the scales at just 13.42 pounds. And it’s absolutely rideable – with bar tape AND pedals, SRAM RED components and ZIPP wheels and ultra light Vuma Quad cranks. Bravo fellas… 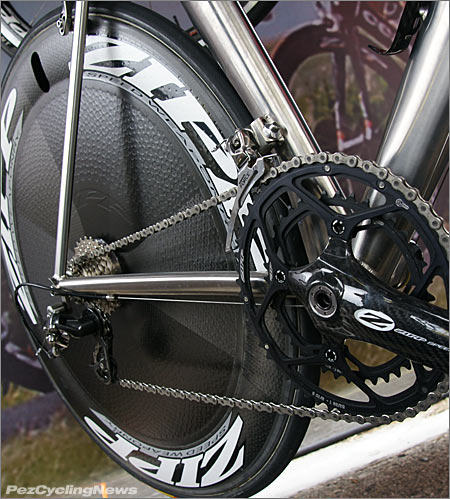 Another very cool weapon of speed was ZIPP’s Sub 9 Tubular disk wheel, now available with PowerTap wireless hub. Slipstream’s Dave Zabriskie rode it at the very blustery Solvang TT and told me: “Yeah, it is a fast wheel. I personally didn’t have a problem with it catching too much of the cross winds.” There’s more dimples than a post-zitted 14 year old’s worst nightmare, and it’s been designed to run especially fast with Zipp’s own 21mm rubber. It tips the scales at 1000grams, but the real story is the negative drag it created in testing (at 15 dgrees yaw). Needless to say, the guys at Zipp have jammed this baby with some leading edge design and tech, but all you really need to know is it’s gonna make you faster. 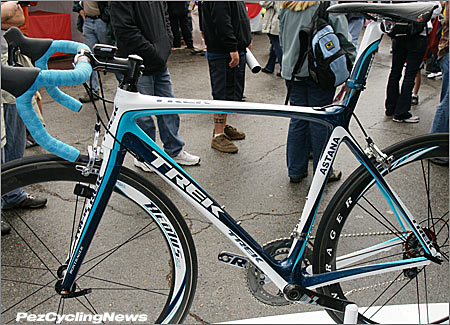 Trek had a pretty big display at the expo, which was good planning based on the constant attention the new Astana-colored Madone and TTX were getting. If you think it looks good here, you gotta see it in person. Maybe I’m partial because it compliments the PEZ kit so nicely… I’m told you can buy one for yourself come June.

And speaking of Trek, they’re another major sponsor sucker-punched by the ASO’s kick in the groin omition of Astana… 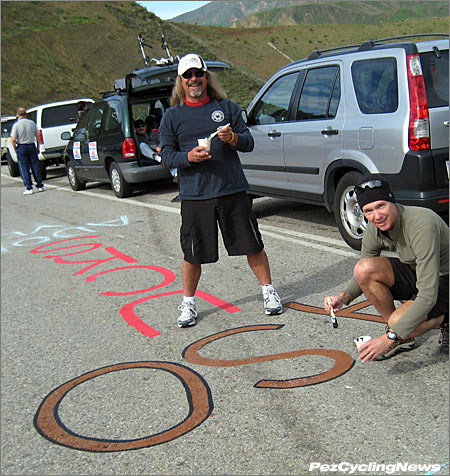 High atop the Balcolm Canyon climb, just meters shy of the KOM, I found yet another example of the public support for the new Astana, its riders and sponsors… these guys know what’s what.

Fan support for the team was huge, and not just because of Levi’s homeboy status. Cycling fans are of higher intelligence and can certainly spot an injustice when they see one… 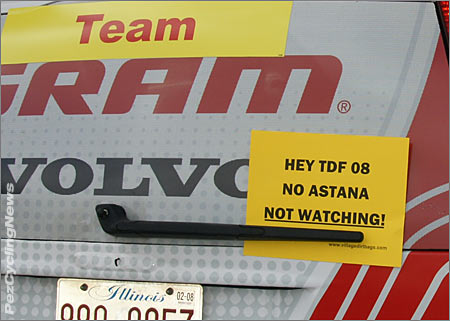 – as noted by the guy who slipped this comment onto the back of a chase car at the Solvang TT. 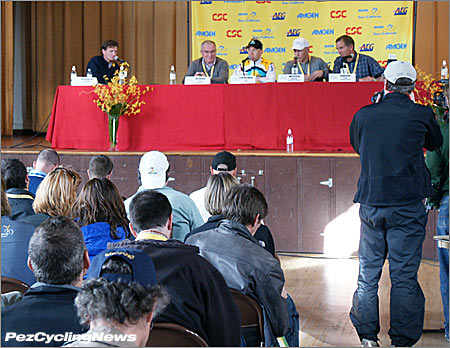 Right after the TT, UCI president Pat McQuaid opened the press conference by stating the UCI is behind Astana all the way, and will do ‘everything in its power’ to fight the ASO’s decision right up until the Tour starts. Now don’t get me wrong, it’s nice to have the governing body’s support and all, but based on historical performance, isn’t this a lot like taking a squirt gun to a flame-thrower fight? 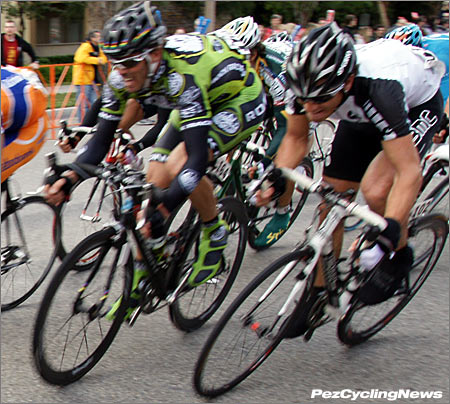 A lot of fans (myself included), expected to be asking “where’s Cipo?” when it came to the actual racing. But not only did he finish the race (58th gc), he even scored 3rd on the second stage. The fans didn’t care, he still had huge crowds waiting for him at the team bus… not bad for a 41 year old. 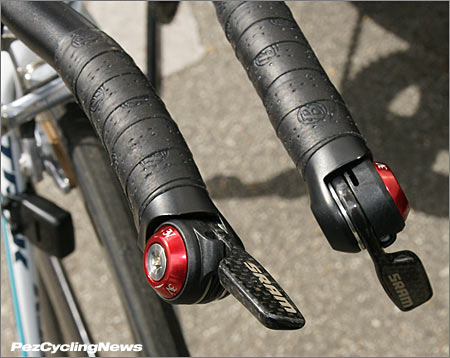 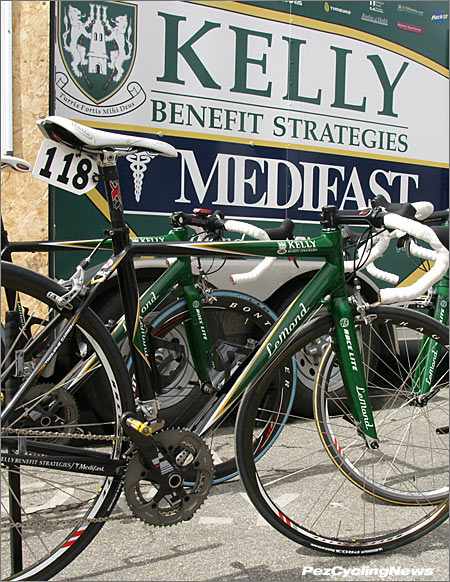 There were no less than 8 US-based teams on the start line, and although Euro-pros accounted for most of the accolades, it was a super opportunity for the younger homies to pick up the big league experience without the big-league travel budget of a trip overseas. After a week of Belgian style weather, a super epic day into a 7-1/2 hour rainy headwind, and a flu bug that decimated the bunch, Team Kelly Benefits Strategies-Mediafast’s Justin Spinelli was their top man in 70th overall… which was one better than former TDF maillot jaune Thomas Voekler. The team’s ds Jonas Carney was bummed they didn’t field more finishers (Jonathan Mumford was the other finisher), but he was optimistic about the steep learning curve afforded his boys. 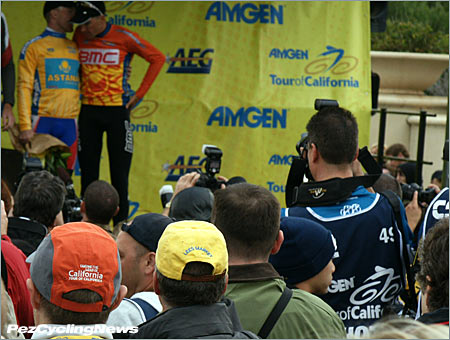 All week long we posted as many of the best shots time would allow – many of them from PEZ-Photog Darrell Parks. And hey – there he is in action at the Santa Clarita stage finish – see the tall guy with the #49 on his vest…? 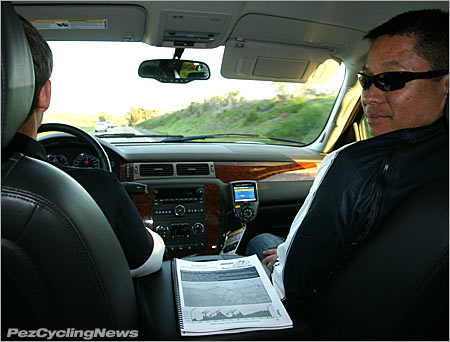 The glamorous life of chasing a tour… Especially the part where you pack into your appointed seat in the car at the end of a long day and drive another 3 hours to the next stage’s finish, seek out some over-greased road grub from another faceless and tasteless chain restaurant, then lug into the next hotel for a 12 AM (or later) lights out. It pays to have some worthy road-mates – like our chauffeur Chris, and LOOK’s operations man Robert. There’s something about long miles crammed into a small space that just ferments the kind of road tales that actually make this fun.

We’ll have more in the next days, so keep ‘er dialed to PEZ.