The stage is set for the first showdown of the Tour of California and the race has not even started. Rock Racing team owner Michael Ball insists that Tyler Hamilton, Santiago Botero, Oscar Sevilla & Mario Cipollini will all start the race, even though none are listed on the latest offical start sheet from AEG…

Michael Ball’s press conference on Saturday was unlike any other this journalist has been to. Never before have I seen a cycling press event start with huge flat screens playing video of the team’s top riders training, set to deafening rock music. Never before have I seen fashion models wander in to kick things off, as if on the runway. This is not your average team press gig…

Is Michael Ball crazy, or crazy like a fox? Is he one of the saviors of cycling, as he would make it seem, or just pushing the anti-doping agenda of the day? Is his team a hybrid of a halfway house for some once mighty recovering figures in the sport (Hamilton, Botero, Sevilla), whose reputations have been tarnished (whether justly or unjustly), and a mix of young untainted talent (Ollerenshaw, Creed) or is it a new model for tomorrow? It’s a hard one to call. 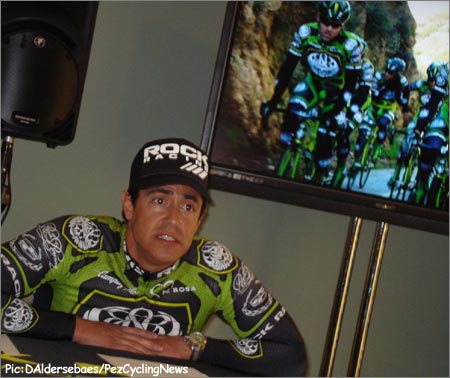 Surrounded by PR people, and a cadre of official looking sorts all wearing their sunglasses indoors and outfitted with security earbuds which they seemed to constantly be speaking into, Ball’s entrance was announced to a smattering of applause. The room was already mildly askew.

After all the pomp and circumstance, well, after most of it, in walked Michael Ball, in full Rock and Republic lime green and black kit, apparently in from a ride. “Sorry folks”, he says, as he is 30 minutes late to his own press conference, “this is new for me, so bear with me. I was just out for a ride with the guys.”

He sat down amidst a flurry of shutters clicking, and roughly paraphrased a prepared statement, talking about his team and what a tight unit they’ve become, fairness in sport, starting a riders union (wait, isn’t there one?), and rider’s rights.

“With a union comes security, and that’s good for business. We need to control the sport from within. Again, it’s good for business, and I’m a businessman first and foremost, so I understand.” More along these lines, “I just want what’s right in this sport. I love this sport, you may be able to tell I am passionate about it. What’s in the past is in the past. Let’s leave that behind and go forward. I am not here with malice, I just want what’s right. Period.” There was much banging of fists on the table, and much gesticulating. “I’m really bothered by the unjust behavior of cycling’s governing bodies. Mistake or not, everyone deserves a second chance.” He also added that he’s received a “great deal of support from within the peloton. “I like to get the emails and phone calls saying ‘Thanks Michael, for what you’re doing’”.

He then went on to announce his roster for the Amgen Tour of California 2008: Tyler Hamilton, Oscar Sevilla, Santiago Botero, Doug Ollerenshaw, Michael Creed, and – gasp! – Mario Cipollini. Yup, you heard it here first, he’s got the Lion King supposedly starting the race.

Oddly enough though, the official press communiquй reads differently, with Cipo, Hamilton, Sevilla and Botero not listed as starting. Had he had any communication with AEG about this? “No, not really. I hadn’t heard from the organizers. I hoped that that was a problem with word processing or something.” Will he start if his roster is disallowed? “Let’s hope for a positive outcome”, he said with a heavy sigh and a shake of the head, like his boy hit a long ball that just barely went foul. He applauded the organizers for allowing Astana to race in California, following it with a hearty “Bravo!” 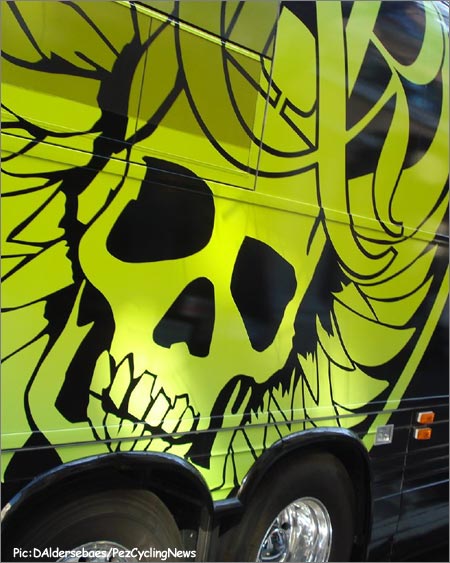 He waxed poetic for some time in long answers questions fielded from the packed room at the Garden Hotel in Palo Alto. He ranged from succinct to abstract, constantly reinforcing his point that he and his team are here to move forward, to “make this sport cool.”

One can’t help but notice Mr. Ball loves the sport. Whether or not he is cognizant of the inner workings of the peloton as it is today is debatable, but it is absolutely clear he’s determined to see his team succeed and he’s even more convinced his team roster is free and clear to race legally.

When I asked him point blank “Will you ride the race with a short team if your stars are disallowed?” he wouldn’t answer directly. It would seem he wants the cycling media (to whom he was very friendly, thankful, and gracious towards) to get on board with his fight – perceived or real – although there were several questions put to him that he wouldn’t directly answer.

He had a mystery figure who was not introduced seated beside him, who would in a very lawyerly fashion lean over and whisper in Mr. Ball’s ear as the touchy questions came his way. He’d deflect straight answers and again answer in the abstract. Going forward. Change. Cool. He showed a self effacing side by saying “after this, I’m running for some sort of office!”

He closed the conference by showing a short DVD about his new endeavor “Rock The Cure” which is dedicated to fighting cancer. A line of product will be out shortly that will turn over 100% of the profit to cancer research. “For anyone out there touched by cancer, there is hope. There is hope.” This seems to be the next juggernaut in the fight against cancer, and Mr. Ball is equally vigorous about this passion.

He sent the media folk on their way with letters to the AEG from him stating Hamilton’s (and his other riders) ability to legally race “barring these riders is utterly unprincipled” it reads in part, as well as a letter of support (copied in such fashion it cannot be read) on letterhead from the Federacion Colombiana De Ciclismo and another from Real Federacion Espanola De Ciclismo stating that Oscar Sevilla is under no sanction or disciplinary procedure

Like him or not, Michael Ball and his Rock Racing team mean business. Whether or not they’re allowed to take the start line is another matter entirely.

Stay tuned, as tomorrow should be VERY interesting for this team. As the questions kept coming about his riders and some of them not being allowed to start, he was asked, “Will you fight?” Ball paused, “Will I fight…….?” And his glare as his voice trailed off spoke volumes. You’re damn right Michael Ball is going to fight.