Robert Gesink was the young sensation of today’s stage, taking over the mantle from Tyler Farrar yesterday. Gesink rode away from the dismantled field on Sierra Road with defending champ Levi Leipheimer and no one could follow. The time gap on the line wasn’t huge, but it was WHO was in it that provided the doozy: Fabian Cancellara!

It was always going to be a decisive day, but the question was: HOW decisive? In a truly memorable stage punctuated with constant aggression, the damage (even with the enormous climb of Mt. Hamilton) was almost the same as the previous two years: impressive, but not earth shattering. Sure, Levi took out some time along with Robert Gesink, but the chasing group of 14 was a mere 19 seconds back. 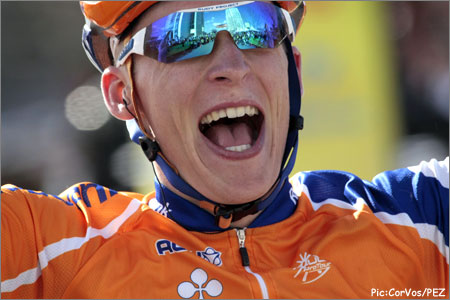 And who was in it? None other than the big man himself, Fabian Cancellara. Cancellara has to be nearly the combined weight of both Gesink and Leipheimer. The man never ceases to amaze, and now here he is, 2nd place overall, only 16 seconds back. He’s the world’s best time triallist and there’s a 24k TT in two days time. Is it possible, even with the significantly toughened final stage…to take the overall?

If not Cancellara, there are a number of other possibilities to give Leipheimer a hard go of it if he so much as falters: Millar and Zabriskie to name but two.

Let’s go back and look at the pictures that defined the day: 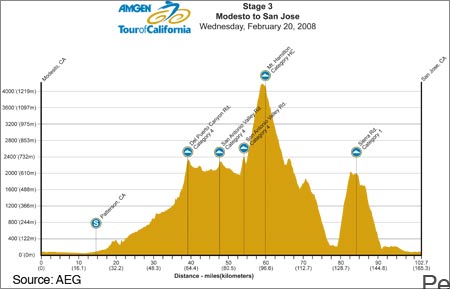 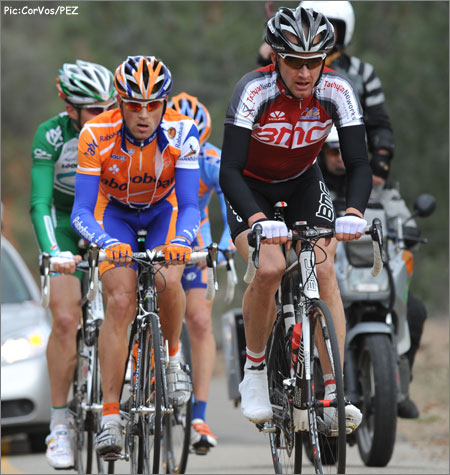 It took a lot more work to get the early break gone today, but as seems to always be the case, a group wrested itself from the grip of the field and set off on their lonely trendsetting furrow. And whoda thunk it, BMC had a rider in it, and it was Scott Nydam: impressive to say the least. 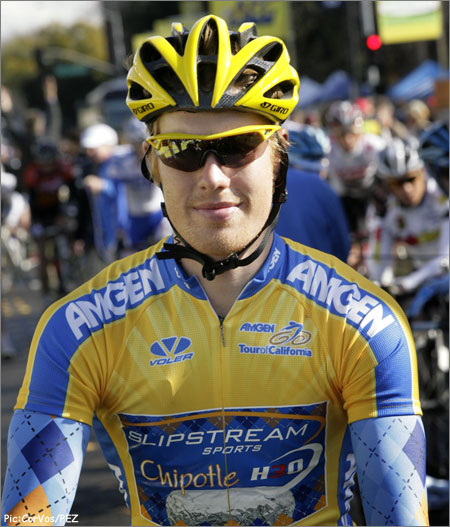 Yellow Jersey Tyler Farrar had a terrible day after coming down with a stomach bug and had to abandon the stage part of the way through. 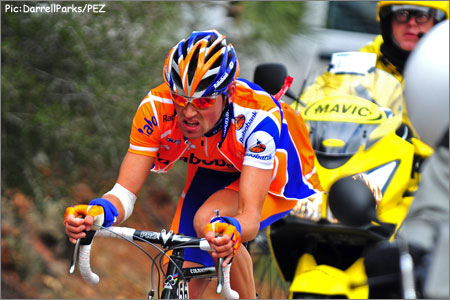 The break didn’t have a chance on the awesome slopes of Hamilton, but even as the field poured down upon the rest of his breakmates, Paul Martens kept the gas on full…and still met his demise along the merciless grade. 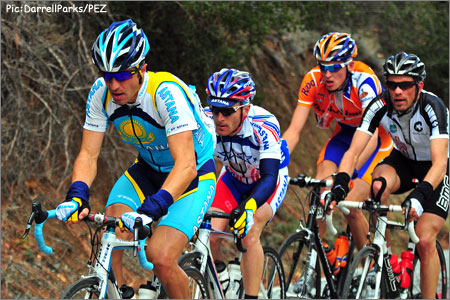 Chechu Rubiera was a damn fine domestique for Lance Armstrong en route to countless Tours de France, so to see him mowing down upward tilting pavement with apparent ease (at the services of Levi Leipheimer) was hardly surprising. 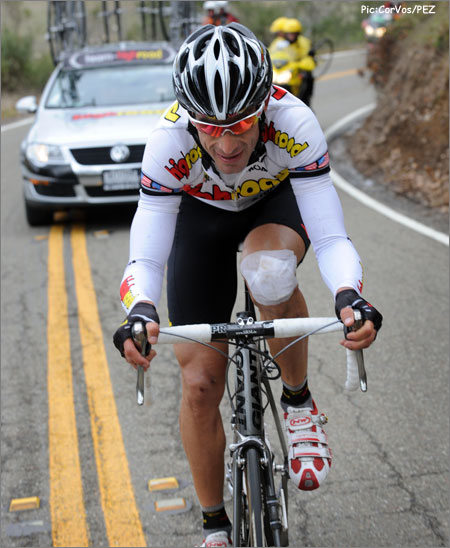 George Hincapie got away on the descent of Mt. Hamilton and went to work as a solo escape artist. Not exactly the typical setting for Mr. Hincapie, but a role he played to fantastic effect. The odds never seemed great that he’d succeed, but to see a rider of Hincapie’s caliber through caution to the wind and put all of his eggs in one little basket – that’s good stuff right there. 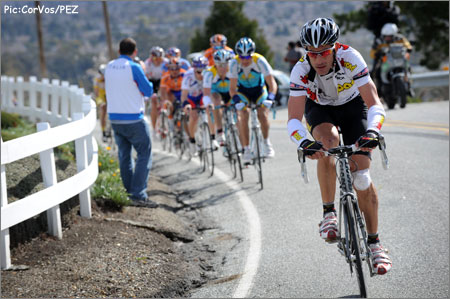 …and of course he was caught. Ah well, the effort was still fantastic. 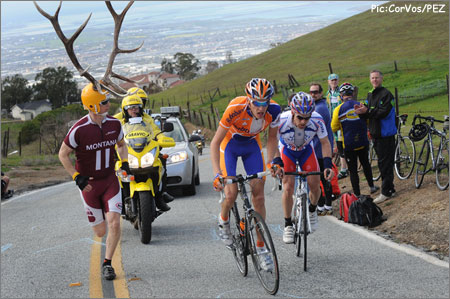 When it came time for the showdown gunfight, only Leipheimer and Gesink were found to have working firearms, and boy were they on fire. No one could touch the magnificent duo of climbers. 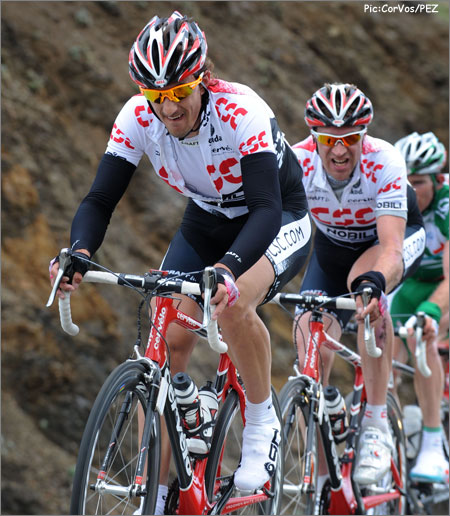 Fabian Cancellara put up a damn good fight though, and his efforts to minimize the losses did his chances at overall victory a world of good – he’s only 13 seconds behind Levi! 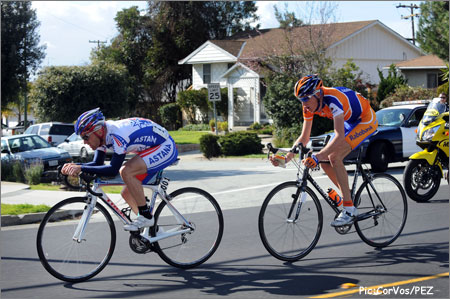 Poor Robert Gesink didn’t get much of a breather sitting on Leipheimer’s wheel. 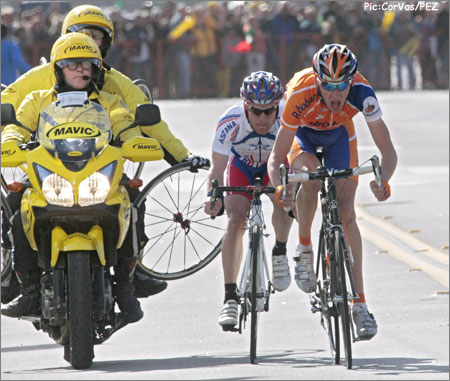 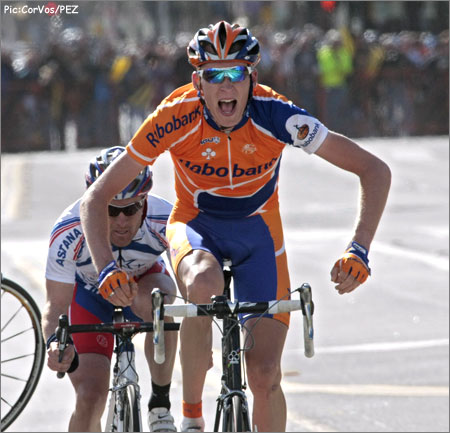 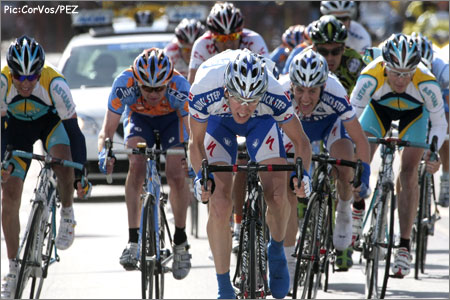 Less than 20 seconds behind, the chasing group of 14 sprinted it out with Seeldrayers coming out on top. 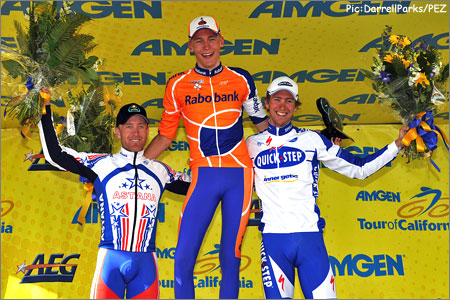 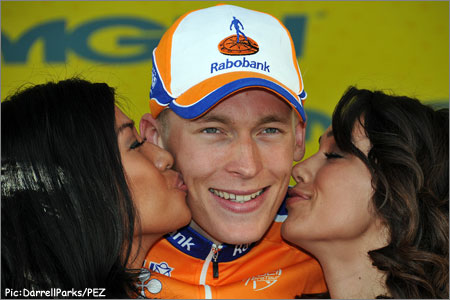 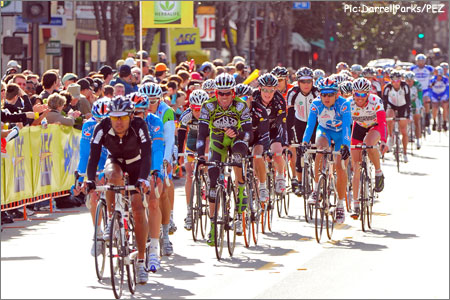 The grupetto arrived safe and sound at just the right time. They’ll all be starting tomorrow’s stage.