The bad weather came back for a final few rounds on the poor bodies of the battered and beaten lads plying the roads of the Left Coast in the Tour of California. The final day was ripe with suspense, all provided by a quality break that went the distance, whilst behind, the field made sloggy chase allll day long. In the end, it was Hincapie getting the best of his remaining cohorts and Levi with his hands on the 10,000 dollar overall check.

It ended up being a fairly routine successful breakaway stage: break goes early, break gets decent gap, break never comes back, rider wins out of break.

There was much speculation about the huge climb that dominated the profile of today’s stage, Millcreek Summit, and its potential to shred the field to nothingness. It was a long climb, sure, but the theatrics and uber-drama were definitely lacking as Astana tap tap tapped on front the whole day, whils the break clop clop clopped off the front.

Coming into the final wet circuits in Pasadena, Tom Zirbel had a go of it all by his lonesome and put up an impressive fight as he never got too much of a gap, but just kept going and going and going. The huge time triallist couldn’t quite wrest himself free, but his performance was nothing short of a spectacular.

In the end, it was Hincapie who got the best of his breakmates in the small group sprint and celebrated a highly sought after win for his High Road team.

A few seconds later, Levi crossed the line safely within the confines of the field, and with his finish, the overall title for the second year in a row. 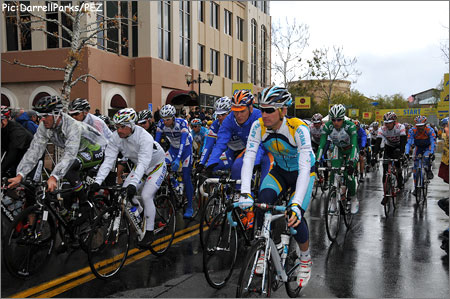 Nice and wet for the poor saps…at least it was the final day. 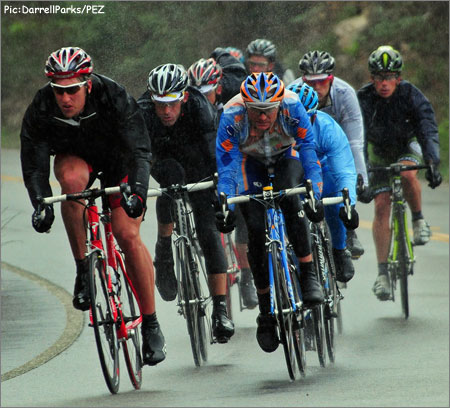 If ya gotta spend a day in the rain, might as well spend it off the front, right? 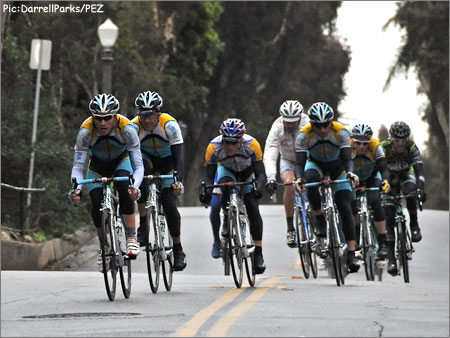 Or, if you can’t be in the break, join in with Astana and have some fun on the front for the entire day. Woohoo. 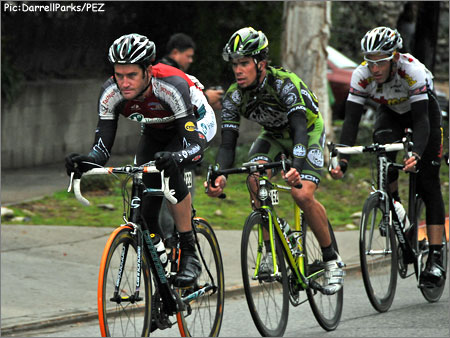 When Zirbel attacked, the work was left to Hincapie, McCartney, and Mike Creed. 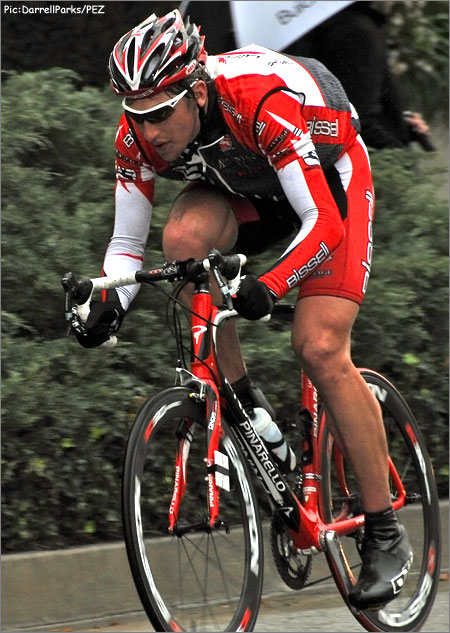 Rollin pulled it off a few days ago against Hincapie and another chaser, but over a longer distance and THREE chasers, Zirbel couldn’t quite pull it off. 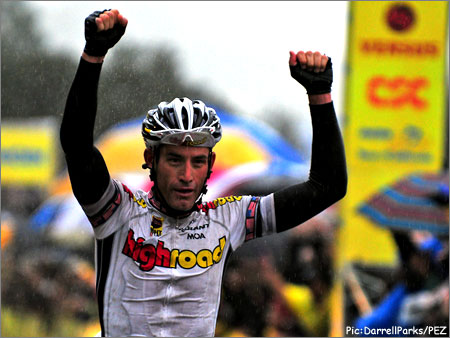 And so it came down to a sprint, and George Hincapie is a fairly accomplished winner of such activities. 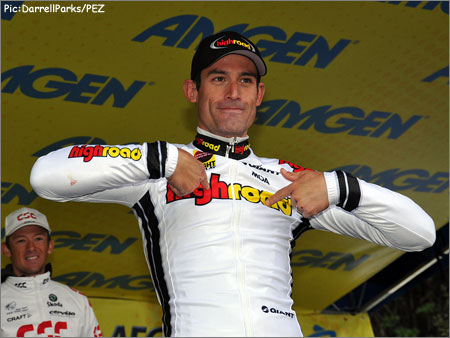 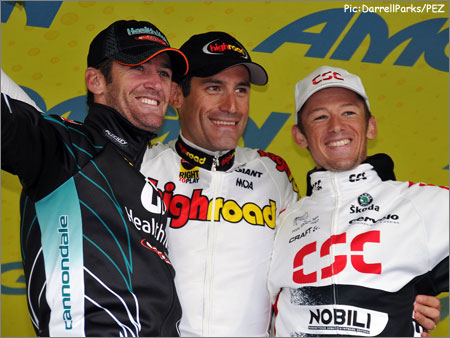 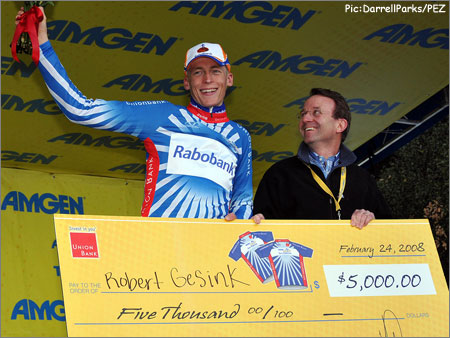 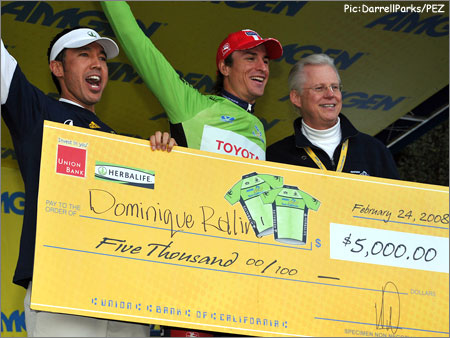 Rollin gets five thousand for his Points victory – he barely held off Haedo by two points! 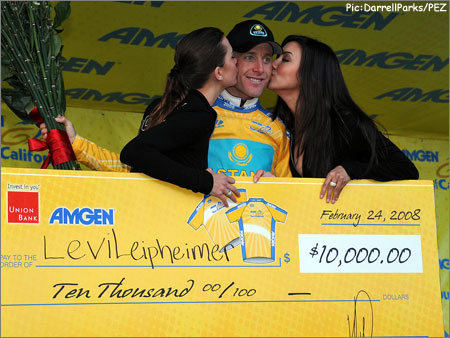 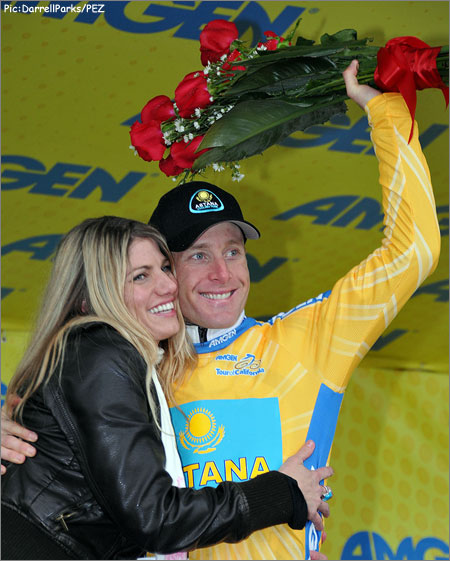 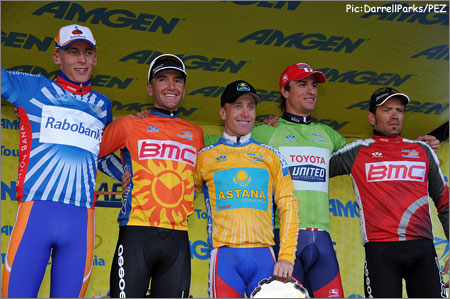 The jersey winners hopped up on stage one last time: Gesink (young), Nydam (mountains), Levi (overall), Rollin (points), and BMC as the most aggressive TEAM. 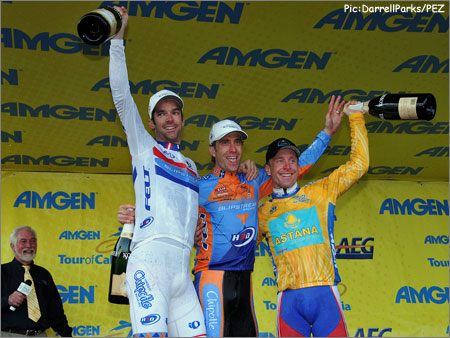 The final podium…a bit out of order, but who’s counting: Levi wins, Millar 2nd, and Vandevelde in 3rd. 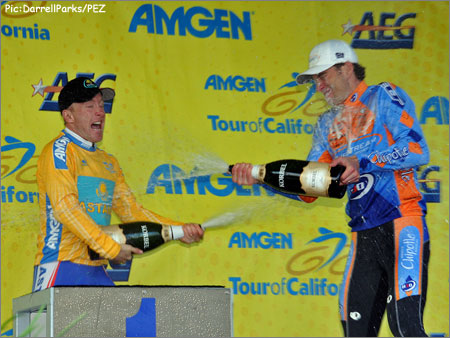 No podium celebration is complete without showering in bubbly.

California PEZ: Balcolm In The Middle