Despite coming down heavily and retiring after a stage two pile-up, Silence-Lotto’s former Italian time trial champion, Dario Cioni gave his take on a wet and surprising Paris-Nice – plus his views on the ASO vs UCI super heavyweight bout.

Pez: Tell us about the crash, Dario.

Dario: There were 60 kilometres to go and a lot of us came down in the wet, I was hit in the mouth by another rider’s elbow, I had a deep cut in my mouth and to the muscle in my mouth.

If it had been closer to the finish, I would have carried on, but I was bleeding heavily and the conditions were terrible so I had to climb into the ambulance.

I was extremely lucky because there was a specialist on hand to do the stitching and he’s made a very good job of it.

I was just thinking that I could actually have started Tirreno-Adriatico today! 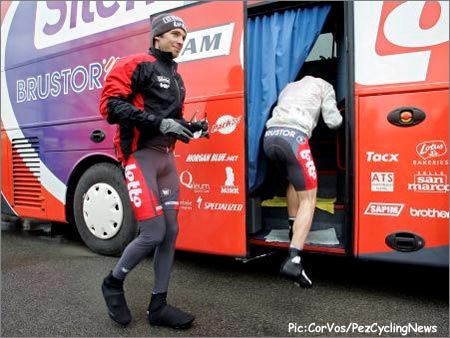 Pez: Was this your first Paris-Nice?

Dario: No, no I’ve ridden five or six and two Tirrenos.

Paris-Nice is a tougher race because the organisers always put at least one big climb in and the weather can be bad (he’s got that right!). Tirreno tends to have better weather and the climbs are not so severe, it’s a more nervous race than the French one, more of a sprinters’ race.

Pez: What’s the Silence game plan for the race?

Dario: With no sprinter it’s simple – get ‘Popo’ (Yaroslav Popovych) or Cadel (Evans) a good GC finish; you’ll notice that the riders selected for the race by the team are all good climbers.

We have ‘Popo’ in sixth place, so that’s positive, he and Cadel were unlucky to crash on day one, but we got them back up; however Cadel has lost more time, so it’s down to ‘Popo’ now.

Tomorrow will decide a lot – the Ventoux, but Paris-Nice is never won until the last day, and that’s a difficult stage.

Pez: Have you raced the Ventoux?

Dario: No it’s strange, this is my eighth year as a pro but I’ve never raced up it. If the weather continues like it has been, it will be a very tough stage and will decide who can and cannot win overall.

Pez: Steegmans has moved up a gear?

Dario: For sure, last year he won a Tour stage – that says a lot about his ability – but this year he has moved up again. I drove over the route of stage two when I was in the ambulance and it was a tough finale, not what you would think would suit him.

Dario: No! I didn’t see the whole race on TV today, so it’s hard to tell how much effort guys are making, who is on the limit and who is comfortable. The climb today was hard, but Ventoux is a real climb. If Chavanel survives that, then he has a chance, but I don’t think that’s how it will be, look more to ‘Popo’ and Davide Rebellin tomorrow.

Pez: What about the ASO – UCI rift, what are the riders saying?

Dario: That’s a difficult question but I’m in a good position to comment because I’m in the riders’ association. The riders are tired of this fight and so are the teams. It’s the riders, the teams and the tifosi who are paying the price and if the ASO and UCI cannot find a solution, then someone else will have to. I don’t know what this solution will be, but one will have to be found because if the ASO and UCI do not find a compromise then there will be no sport left to fight over.

Pez: And how about your injury?

Dario: I’ll be back on the bike tomorrow, there’s a training camp for young riders in my village just now, so I’ll do two or three hours with them.

You just can’t keep a good man down!

Dario will be giving us his views on the “Race to the Sun” as it battles towards the Med – keep Pezzed!

~ Ciao to everybody
Let’s talk about the first race of the season and also the only one up to now: the Ruta de sol in Spain. When I was packing my suitcase I was tempted to follow the race name and only pack short sleeved jersies but then I remembered last year’s race and decided to put in some rain material.

So when we arrived in Malaga the weather was ok but not as good as you would expect from sunny South Spain. The next day we woke up and were greeted by dark clouds but no rain. Things changed just in time for the start of the race, but to the worse, as it started to rain heavily during the transfer to Km 0. It never stopped for the whole stage and for the next two also. Not bad for this part of Spain that probably has 10 to 15 days of rain in one year. We managed to have 30% of them! 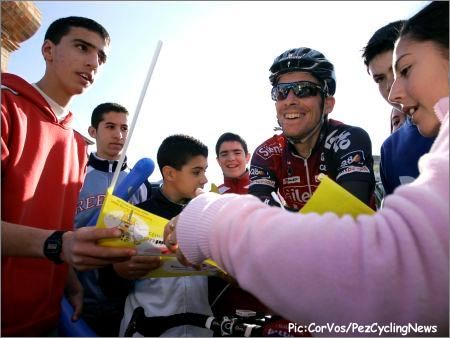 A few fans with some pens and paper can make any day brighter.

Last year I won the first stage and finished 2nd overall so I knew it would be difficult to repeat. I had a surprise as I was starting with number 1 in the race and this does not happen often. The race was quite good for the team even if GC was over after the first stage. There was a break in front and while the group was chasing there was a big crash with 30-40 riders going down.

Just before this happened the director told us “the downhill is dangerous” but by the time he finished, bikes were going all over the place and finally the front wheel washed out and I was on the ground. Basically we crashed on the straight but the road was off camber that added to a very oily surface, and meant that all the riders on the left side of the road went down and were soon after joint by the mechanics. 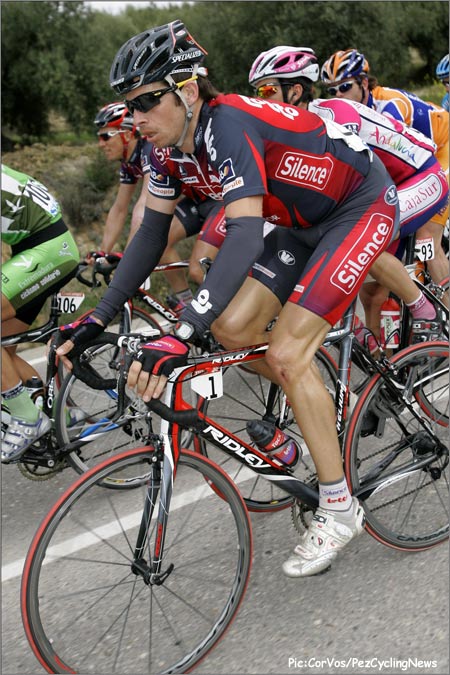 Dario enjoyed his spell as rider #1, but without the same results as last year.

By the end of the week we had won 1 stage and finished 3rd in GC with Cadel.

On the agricultural side the olive trees are still sleeping so there is not much to do. The wines are a bit ahead and starting to wake up. I am quite excited as I should get new poles put in the last vines I bought so they should soon be looking better. Next month I will show you!