It’s Day 2 at Le Critйrium du Dauphinй Libйrй, and even the gc boys are trading dukes with the sprinters, as Green Bullet Alejandro Valverde stole the day from Thor Hushovd’s band of green gregarios, with Cadel 5th & Levi 6th… Looks likes some real racin’ in France – !

All eyes were on Levi Leipheimer yesterday, at the start of the Critйrium du Dauphinй Libйrй in Avignon. The Astana rider made no secret of his intentions, telling the local press it was one of four races he had targeted this season, including the Tour of California, the Olympics, and the Vuelta, and that he loved the route (“J’aime cette course” ran the headline. 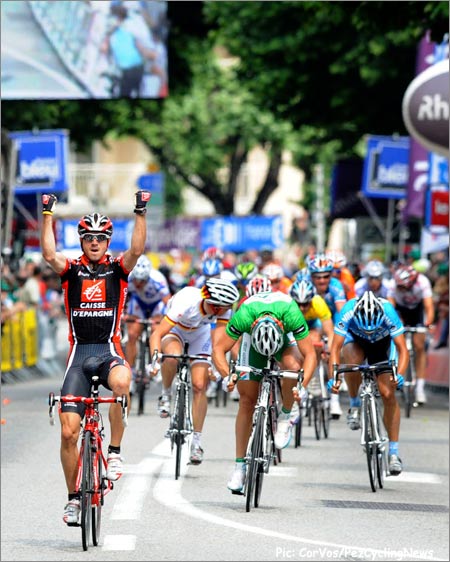 Valverede showed his light Spring racing load has paid off.

And he started the event with the most emphatic statements of those intentions, winning the 5.6 kilometre prologue from Le Pontet to Avignon by just 1 second over a visibly disappointed Thor Hushovd. Alejandro Valverde was just a further 5 seconds back in 3rd. 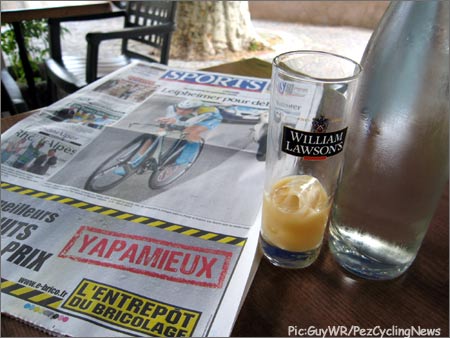 Stage 1, a nice 194-kilometre jaunt from Avignon north to Privas got underway just before lunchtime today. With the time gaps from the prologue so small, there was going to be some tough competition and hard riding to grab precious seconds at the finish. 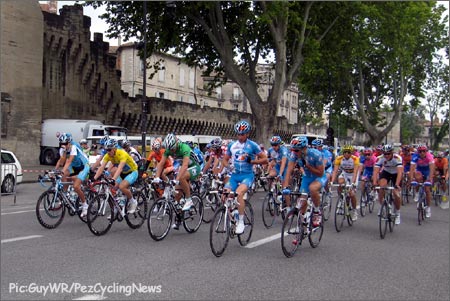 The peloton heads out from Avignon.

Not to disappoint expectant fans, a breakaway of three riders got their television time for their sponsors, with German rider Christian Kux from team Milram taking the one categorized climb to steal the mountains jersey off last year’s wearer Remy Di Gregorio. 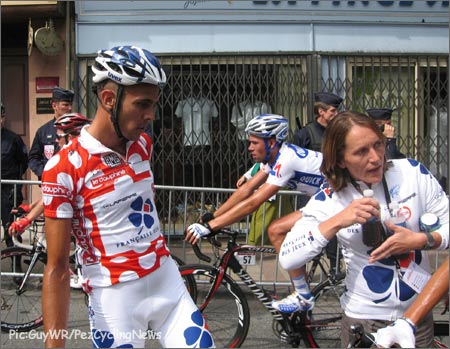 Remy Di Gregorio had one day in the mountains jersey. 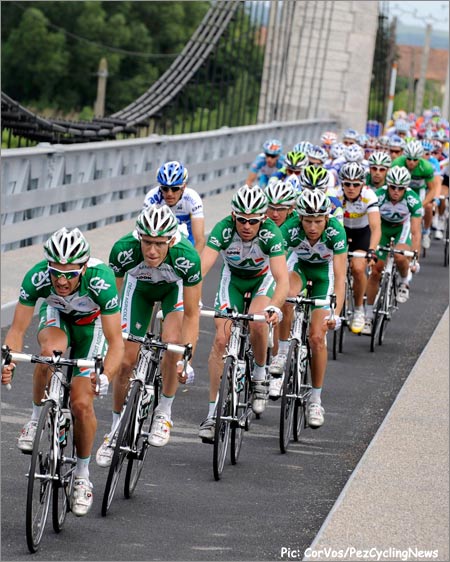 The break was not given too much time, and with 10 kilometres to go, Credit Agricole came to the front and were soon joined by team High Road for the catch.

The final kilometres snaked up through the national park area of the mountains of the Ardeche, a rugged set of small peaks and canyons along one of the tributary rivers to the Rhone. The grade was only 4-5%, but it looked steeper to the eye and the front riders were working hard and mid-20s temperatures kept the heat on. 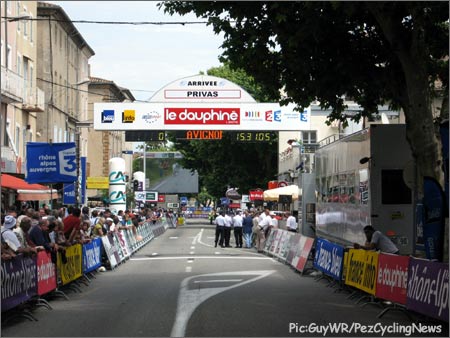 Uphill to the finish in Privas today.

Hushovd had his team working hard, but it was Valverde who was fastest up the finishing straight, just taking Hushovd on the line. For the latter, though, the 6-second bonus over 6th-placed Leipheimer was enough to grab him the yellow jersey. Leipheimer may have had plans to hold the jersey for the whole race but will now have to be content to let it go for at least one stage and perhaps even to wait for Wednesday’s time trial to claim it back. 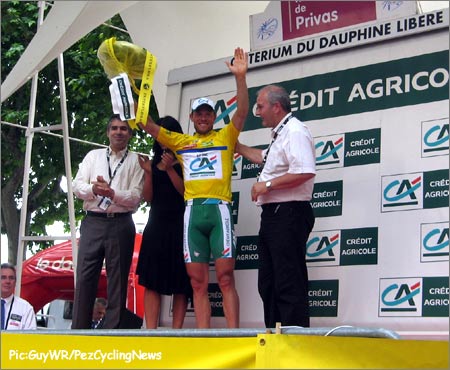 Second on the stage and the yellow jersey for Hushovd.

For the breakaway trio, few spoils were to be had – except for the attention of the French press for Sebastien Joly. 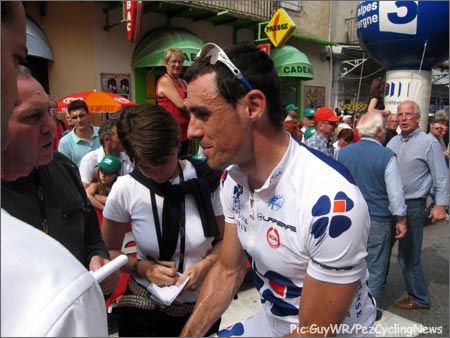 Sebastien Joly after a tough day gets the local press attention.

There’s plenty more racing to come this week, as the race heads north for its rendezvous with the Alps on the weekend. PEZ will be back on station for the final stage in Grenoble to see if Levi Leipheimer will be back in yellow, or if an obviously in-form Alejandro Valverde can do enough in the mountains to take the win.